#17 – The Ullswater Lakeside Path – a walk for all seasons. 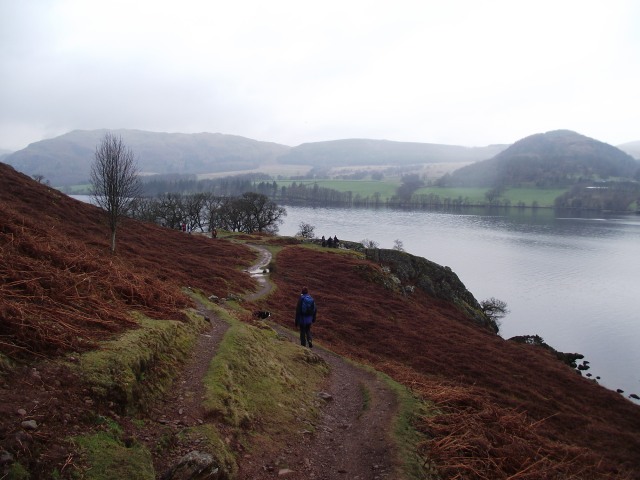 After last weeks walk in the sunshine, the winter weather returned.  I wouldn’t have minded a full-blown snow storm or similar, but on the hills it was ‘dreich’ – for those who have never come across this Old-Scots word, Urbandictionary.com defines dreich as, “a combination of dull, overcast, drizzly, cold, misty and miserable weather. At least 4 of the above adjectives must apply before the weather is truly dreich.” Well, we had the full set of six, and consequently we decided to find a low level walk. 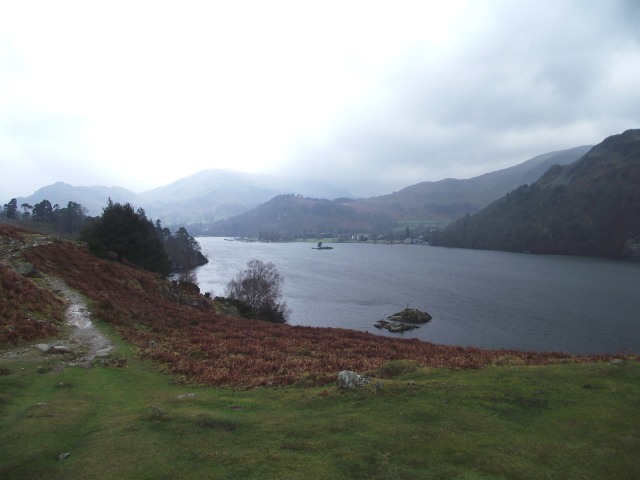 Having made that decision, we wanted a low-level walk that had the feeling of being in the hills.  There was one clear contender – the Ullswater Lakeside Path from Howtown to Glenridding.  Linear walks such as this are satisfying in so far as they are like a mini-journey, travelling from one place to another.  Conversely they suffer from the logistic disadvantage that they start and finish in different places.  Having a car at each end is one answer, but at Ullswater there is another option – the Ullswater Steamer.

View from the 'Lady of the Lake'

In summer, this is a great way to start this walk – on the edge of winter it epitomises all that is ‘dreich’.  We boarded the boat at Glenridding at 1110 hrs, and joined the huddled group of passengers on the upper deck – below would have been better but we had ‘Mist’, our Border Collie travel companion, with us.  At least those of us in mountain clothing kept warm(ish) and dry, but I felt sorry for the group in city clothes, who put a brave face on things.  Thirty-five minutes after leaving Glenridding, we were deposited at Howtown Pier, and left to our fates as the “Lady of the Lake” continued to Pooley Bridge.

A surprising number of people disembarked at Howtown, considering the state of the weather.  The first mile or so of this walk is often a bit like the Grand Prix, with groups straining for pole position and an early lead.  We started walking behind our fellow travellers, delayed by me getting to grips with a new camera.  When we did start, a brisk pace soon had us warmed up, and before long we were starting to overtake those who had set off before us.  The path starts by traversing the slopes of Hallin Fell, following the edge of Ullswater.  By the time we had reached Sandwick we had taken the lead, though we were still a bit on the slow side as far as ‘Mist’ was concerned! 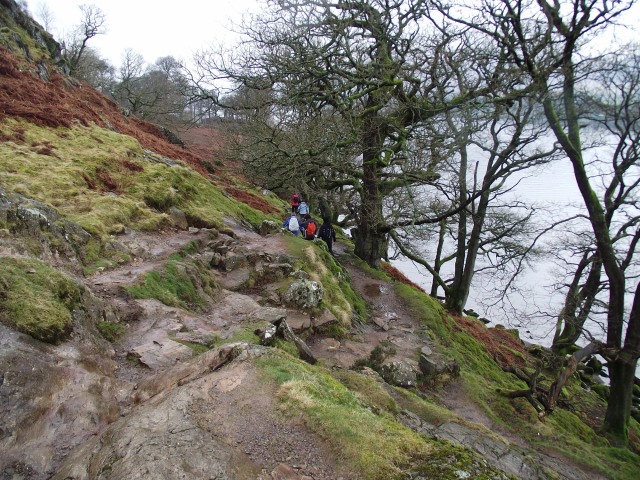 Going for the overtake!

The path is one of the best low-level walks in the country, and even on a grey day the ever-changing landscape and sense of drama in the scenery are rewarding.  Don’t write it off as a soft option, though – like all lakeside and coastal walks there is a surprising amount of up and down, and there are a few places where a careless step could result in injury.  For this reason, Patterdale Mountain Rescue Team have a boat as part of their equipment – the middle section of the path is isolated and casualty evacuation is much easier by water. 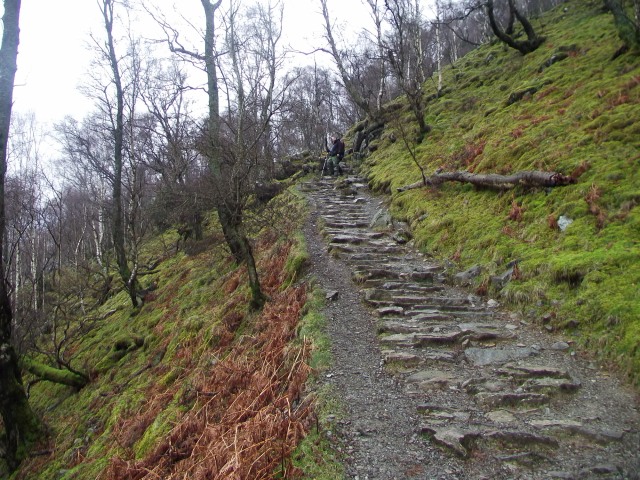 The switchback section of path below Birk Fell goes through woodland, and even in winter the views are restricted by the trees.  As the path approaches Silver Point, the views start to open up, and the path starts to settle down, eventually becoming a broad track.  Although we weren’t in any great rush we made good progress towards Side Farm, which was quietly biding its time before the start of the ‘season’ from Easter onwards.  From there an easy stroll lead us back to the car park at Glenridding Pier.   On a classic walk, poor weather doesn’t get in the way of enjoyment, and the Ullswater Lakeside Path is a real classic– truly a walk for all seasons! 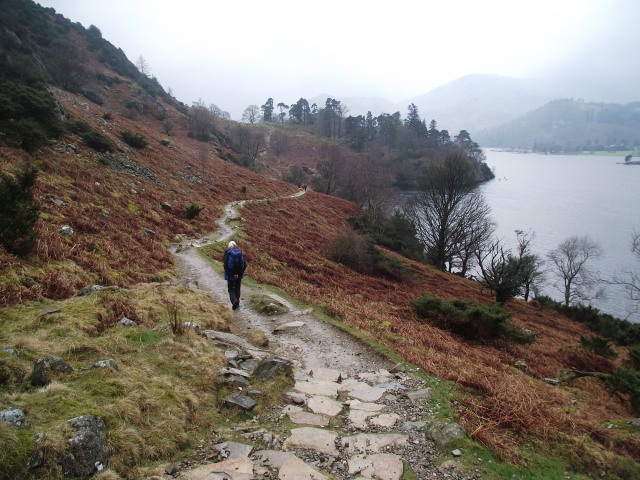 p.s. For the pedantic amongst you, the Ullswater Steamers aren’t, at least not any more – they are now diesel powered.  If you want a ‘real’ steamer, try the ‘Gondola’ at Coniston Water.

p.p.s. For those of you impatient for something a bit more ‘derring-do’, stick around and watch this space over the coming weeks.

I've been mucking about in the mountains for longer than I care to mention. I started out by walking my local hills, then went on to rock climbing, mountaineering and skiing. Still doing it, and still getting a buzz. I'm now sharing the fun, through my guided walking business (Hillcraft Guided Walking) and by writing routes for other publishers, mainly Walking World and Discovery Walking Guides. Just to make sure I keep really busy, I am also currently a member of my local mountain rescue team.
View all posts by Paul Shorrock →
This entry was posted in 2. Lake District and tagged hillwalking, Ullswater. Bookmark the permalink.

8 Responses to #17 – The Ullswater Lakeside Path – a walk for all seasons.