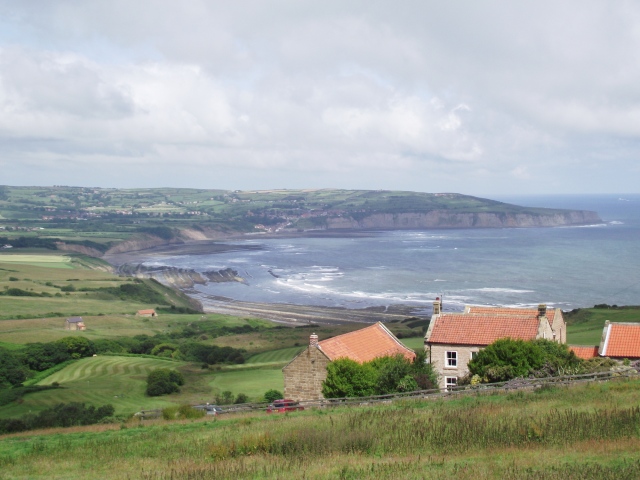 When Alfred Wainwright wrote his guide to “A Coast to Coast Walk” in 1972 he could never have imagined that thirty years later the route would be described as the second best trail walk in the world.  At 190 miles in length, and crossing three National Parks, it’s no pushover, and twelve days is considered a respectable time to complete the walk.   Chris and I didn’t have twelve spare days, but we were just down the road from the C2C finish point at Robin Hood’s Bay, so a circuit including part of the Cleveland Way was the plan.

The “Cinder Track” heading out of Ravenscar

We started from Ravenscar and took the old disused Scarborough to Whitby railway line, known as “The Cinder Track”.  Next stop was to be the stunningly attractive fishing village of Robin Hood’s Bay, where after dropping in at one of the pubs we would follow the Cleveland Way coastal path back to Ravenscar.  One good thing about railways is that they tend to follow gradual gradients; one bad thing about railways is that they literally go ‘round the houses’ to avoid said gradients. 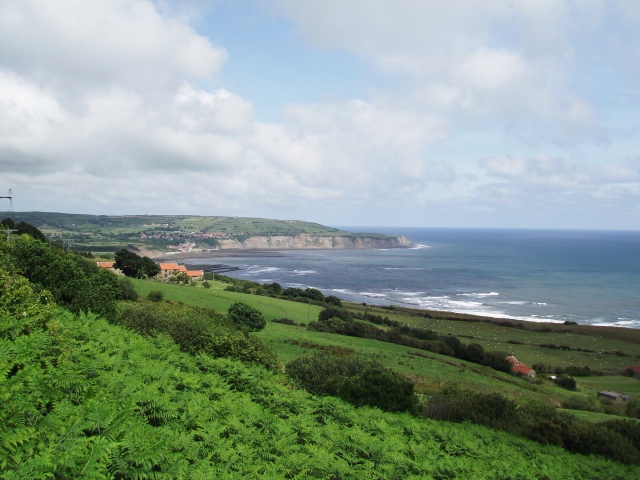 The total length of the walk was about 14 kms, but much of this was in the sinuous curves of “The Cinder Track” as it followed the route of the old railway.  The line was closed in 1965 as part of the infamous ‘Beeching’ cuts, which decimated the British rail network.  The old Scarborough to Whitby line now has a new lease of life as a track for cyclists and walkers, and we made rapid progress to Robin Hood’s Bay.

The old village of Robin Hood’s Bay almost tumbles downhill to the sea, and at high water you can just about step off the main street into salt water.  The old odd-shaped houses nestle next to one another, separated only by narrow ‘ginnels’ or passageways;  include the red roof tiles to the mix, and the village looks as though it should be in Italy, not in no-nonsense Yorkshire.  Unfortunately, the spin-off from looking picturesque is that many of the cottages are holiday homes, and in winter the place is a ghost town. 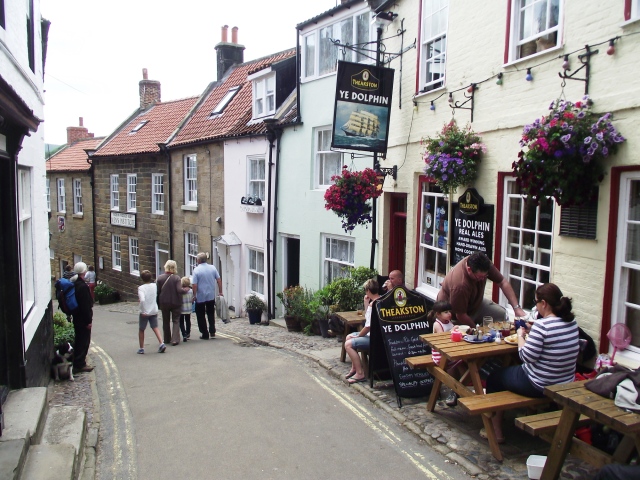 Our usual choice of pub…The Dolphin 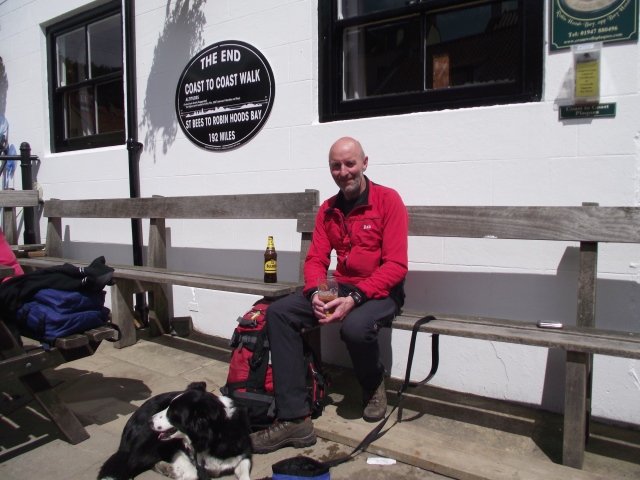 The author and ‘Mist’ outside The Bay Hotel, ‘pretending’ that they have just finished the C2C

A hot days walking, and no pressure to be anywhere, meant that we had time for a ‘pint’.  Our usual choice of pub is The Dolphin, a place with great atmosphere, but as we had never tried the alternative ‘Bay Hotel’ with its ‘Wainwrights Bar’, we thought we would give it a go.  The end of the C2C is right outside The Bay Hotel, especially if you arrive at high water – even the ice cream van has to make a strategic withdrawal as the tide comes in. 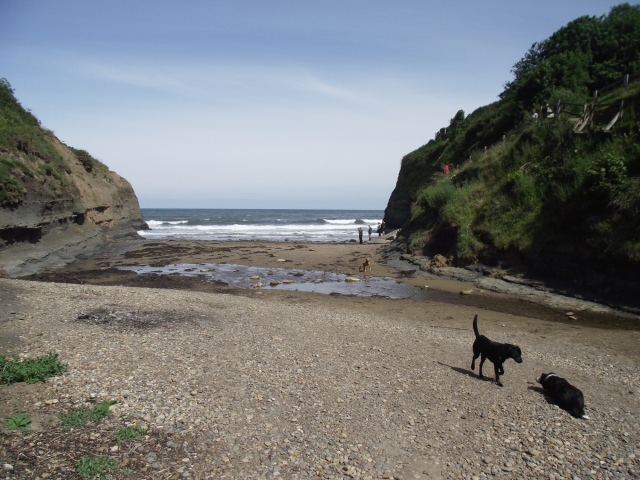 The tiny cove at Boggle Hole 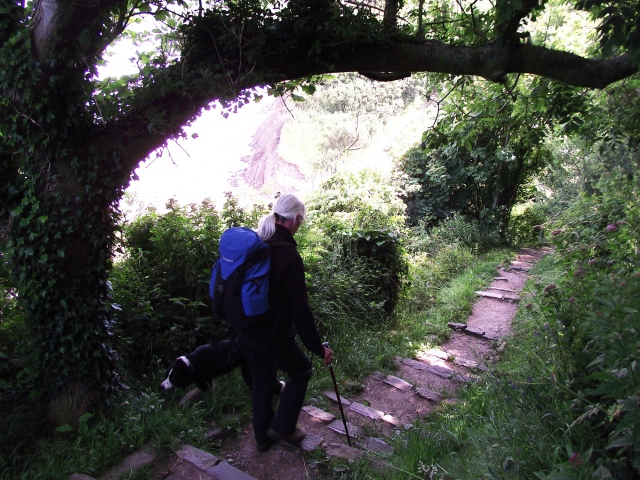 Ups and downs on the coastal path

Having done the pub and the beach it was time to be off again.  Don’t let anyone ever try to tell you that coastal walking is a soft option.  It’s great striding out on the high cliffs, but every stream that crosses your path almost always involves height loss and gain.  This was the case on our return leg with steep little valleys across our way at Boggle Hole and Stoupe Beck Sands.  We finished on an uphill as well, having to gain height to get back to Ravenscar. 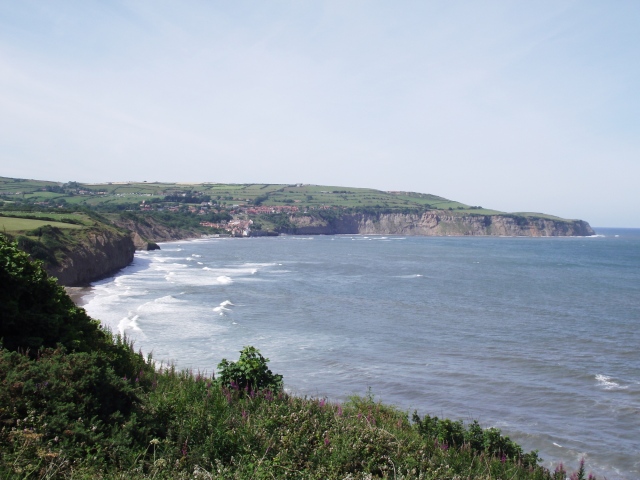 Looking back across Robin Hood’s Bay to the Old Village

The day was hardly a high-mountain challenge or the C2C, but I reckon we earned that ‘pint’ at The Bay Hotel.  We also knocked off a small section of the Cleveland Way on our return leg – all that and good weather as well!

On the Cleveland Way, with Ravenscar in the distance

I've been mucking about in the mountains for longer than I care to mention. I started out by walking my local hills, then went on to rock climbing, mountaineering and skiing. Still doing it, and still getting a buzz. I'm now sharing the fun, through my guided walking business (Hillcraft Guided Walking) and by writing routes for other publishers, mainly Walking World and Discovery Walking Guides. Just to make sure I keep really busy, I am also currently a member of my local mountain rescue team.
View all posts by Paul Shorrock →
This entry was posted in 4. Northern England and tagged Coast to Coast, Robin Hood's Bay, Yorkshire. Bookmark the permalink.