#39 – Yr Wyddfa (Snowdon) via the Rhyd Ddu and the Snowdon Ranger Paths. 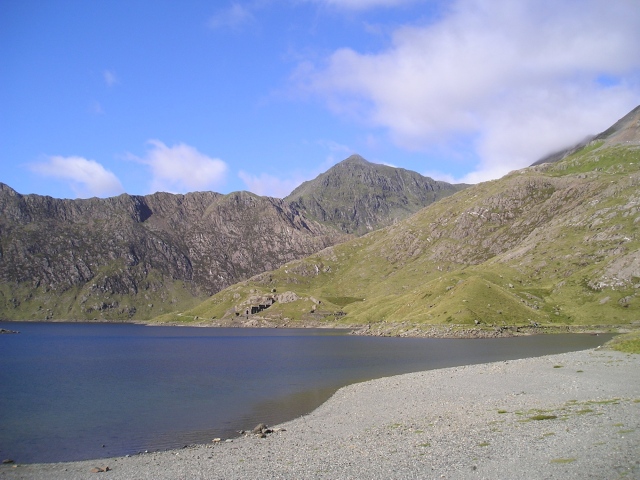 The east side of Yr Wyddfa from Llyn Llydaw

With mountains, being the biggest is often enough to attract walkers, though sometimes a hill is so eye-catching that it attracts attention anyway, regardless of height  – With Yr Wyddfa (Snowdon) you get the double whammy of being the highest UK peak south of Scotland plus being a beautiful mountain on top of that.  Perhaps that’s a triple whammy, as Yr Wyddfa is also an icon of all that is welsh.

The west side of Yr Wyddfa from near Rhyd Ddu

The east side is the head turner, with the lakes of Glaslyn and Llyn Llydaw nestling below dramatic crags.  The main attractions are the PYG and Miners Tracks, with the Snowdon Horseshoe winning the honours as the most challenging (and for some, scary) route on the mountain.  Consequently the east side is the busy side, and is certainly not for those who seek mountain solitude.  For that you need to go to Rhyd Ddu on the west side. 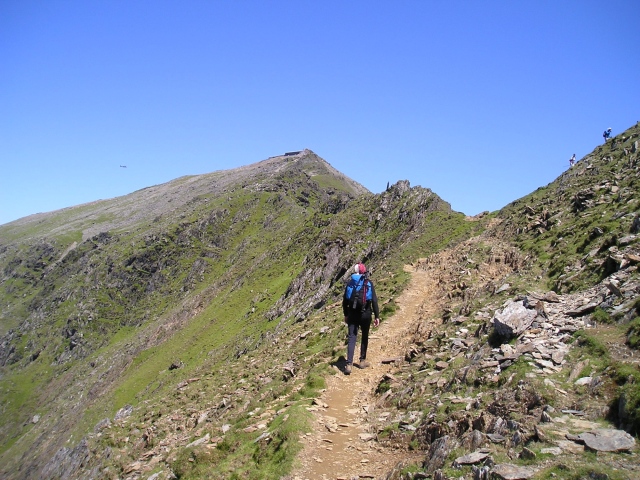 I had been contacted a couple of weeks earlier by Ian who wanted to book a day on Snowdon for him and his son, Barny.  Part of the brief was that Ian preferred a quieter route.  No contest, then – up the Rhyd Ddu Path and down the Snowdon Ranger Path.  There is probably not as much drama here as on the east side, but there’s enough to be going on with, and it’s usually much quieter.  With good weather it’s nigh on perfect. 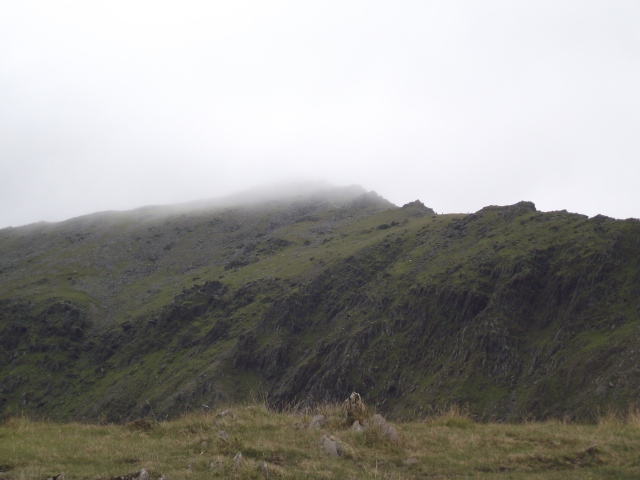 Summit of Yr Wyddfa under mist, viewed from Llechog

The trouble is, you can’t book the weather in advance, but the day we had picked was shaping up to be the best day in a wild, wet week.  Best was a relative term, though.  The day was overcast as we set off from Rhyd Ddu, and as we reached the top of precipitous cliffs of Llechog the mist was already creeping down onto the summit of Yr Wyddfa.

Ian and Barny above the Llechog cliffs

Admiring the (considerable) drop from the top of the Llechog cliffs

The path above the cliffs is wide and secure, with no sense of exposure or drop, but on the final approach to the summit of Yr Wyddfa, the path crosses the narrow col of Bwlch Main – this translates roughly as ‘the Narrow Pass’, and it ‘does what it says on the tin’!  It’s nothing like as long or scary as Crib Goch, but it is definitely not a place to stumble, and in high winds would be quite dangerous. 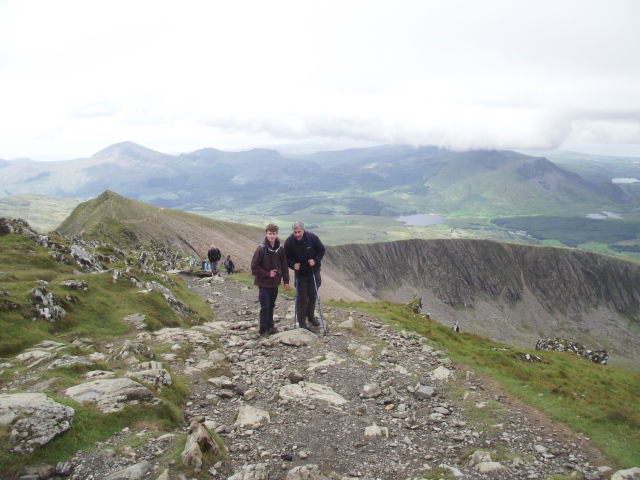 Beyond the bwlch, with the Llechog cliffs behind and on the right

Beyond the bwlch we were still just below the cloud line, but as we went up the mist came down, until visibility was considerably reduced.  I had originally suggested this route to Ian on the grounds that it was less busy than the popular routes on the east side.  Despite this, it was busier than I have ever seen it, though nothing like as crowded as we found the summit of Yr Wyddfa. 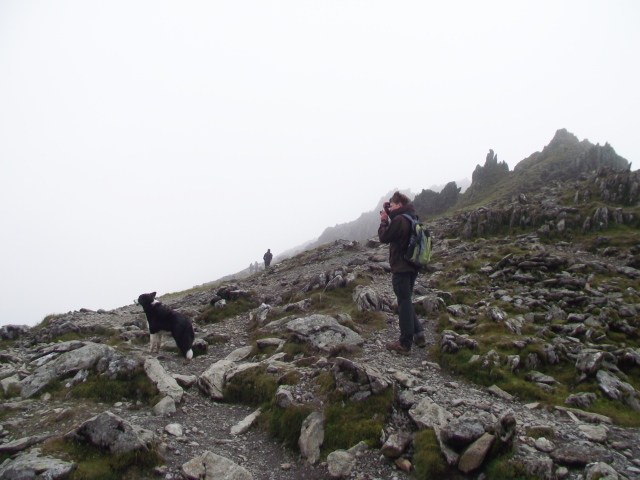 Barny and Ian at the summit of Yr Wyddfa

Crowds just below the summit

…and more crowds above the zig-zags of the Miners Track

The route off the mountain stayed busy until the top of the zig-zags above the Miners Track, as this is where several routes come together.  Descending to the right the PYG and Miners tracks were the busiest, ascending half right was the path to Garnedd Ugain on the Snowdon Horseshoe, and straight on several walkers were following the path by the railway, heading down to Llanberis.

Quiet at last! The Snowdon Ranger Path, with Mynydd Mawr in the distance

Our route was a descent to the left down the Snowdon Ranger Path.  From here we regained the peace and quiet (and the views) that we had enjoyed on the ascent path – a great way to finish the day.

p.s – If you have enjoyed reading this (and I hope you have) why not share on FaceBook, Retweet on Twitter or subscribe to email notifications of new posts by clicking the ‘sign me up’ button in the right hand column.  Or, just turn up every Monday morning to see the latest post.

I've been mucking about in the mountains for longer than I care to mention. I started out by walking my local hills, then went on to rock climbing, mountaineering and skiing. Still doing it, and still getting a buzz. I'm now sharing the fun, through my guided walking business (Hillcraft Guided Walking) and by writing routes for other publishers, mainly Walking World and Discovery Walking Guides. Just to make sure I keep really busy, I am also currently a member of my local mountain rescue team.
View all posts by Paul Shorrock →
This entry was posted in 5. North Wales and tagged hillwalking, mountains, Snowdonia, Yr Wyddfa. Bookmark the permalink.

4 Responses to #39 – Yr Wyddfa (Snowdon) via the Rhyd Ddu and the Snowdon Ranger Paths.