Well here we are hurtling into March and still no real winter.  A couple more weeks and it will be spring, though you might think it had already arrived.  In post #65 I told the story of a very unseasonal (and summery) February day on Cadair Idris in 2008, but sometimes it works the other way round.  In January 2010 there was enough snow to ski from the roadside at Horton-in-Ribblesdale.  With that possibility there could only be one target – Pen y Ghent.

Horton Lane was wall to wall snow – this had mostly consolidated into bumps and dips with the consistency of concrete, with overlying powder in places.  It made ‘interesting’ skiing when the time came to return.  The air was clear as a bell, as the image of Ingleborough shows.

Once I left the lane, I expected to have a tussle at the gates and stiles on the way up – again the photo tells a story that hardly needs a caption.

Two other walkers were also heading upwards at the same time – my mountain-ski gear is old and heavy compared with my modern downhill kit, but even with the extra weight I had a clear advantage over the walkers on the soft powder sections. 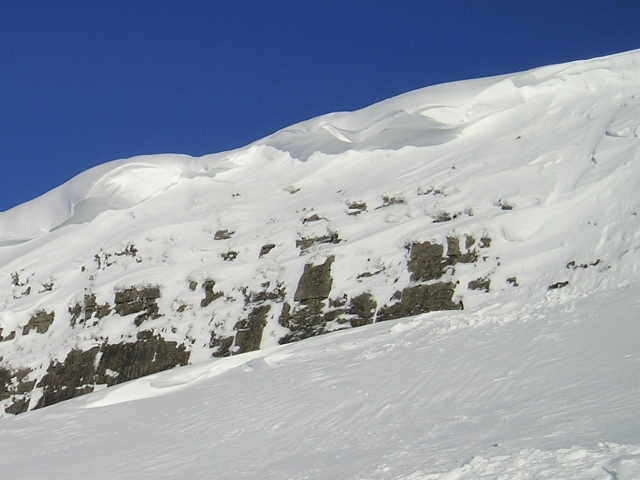 When I arrived underneath Pen y Ghent Crags, it was like a Christmas cake!  Big overhanging cornices were quite evident, and a small amount of avalanche debris indicated that part of the cornice had already collapsed.  It would certainly have spoiled your day if that lot had ended up down the back of your neck!

The final section to the summit plateau

The last section to the summit proved to be a bit problematic – the line I had taken was a gradual ascent which didn’t quite follow the summer path.  It wasn’t long before I was in deep and steep powder, that was breaking away under my skis – I didn’t really fancy trying to race the slope down if it broke away, so with the summit about 600 metres away I did the sensible thing, executed a ‘kick turn’ and headed down to safer ground. 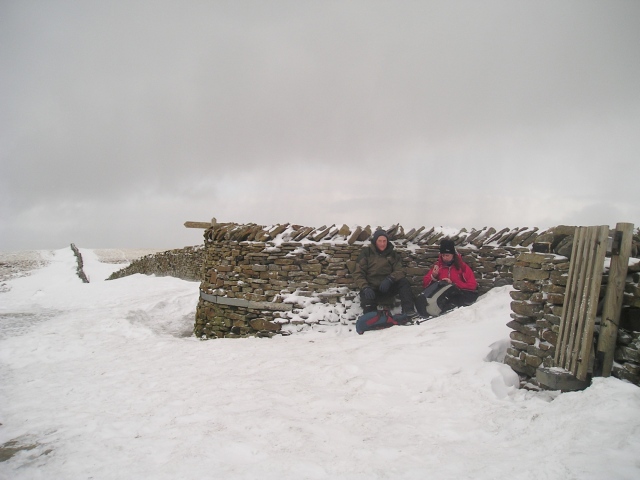 A month later – couple sheltering at the summit 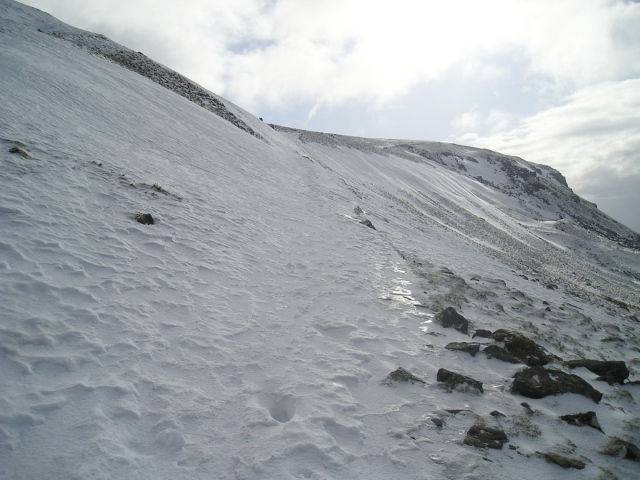 The very icy descent path in February, not far from where I turned back in January

A month later (February) the bulk of the snow had gone, but the photo of the summit shelter shows that there was still quite a bit on the tops.  The snow on the summer path was hard and like glass, which wasn’t a problem until it got steeper.

Ice bound slope with scree below in February

As the path steepened I became aware of the slope below, where the ‘run-out’ was directly into a section of scree – just enough time to accelerate before getting shredded amongst the rocks!  I took a lot of time and care on a section that people skip down in summer – crampons or ‘Kahtoola spikes’ would have made life so much easier.  Having got down safely I kept an anxious eye on the couple behind me, but they teetered down without incident.

What it looked like a month earlier in January

Two good days out in the snow – so what happened this year then?!! 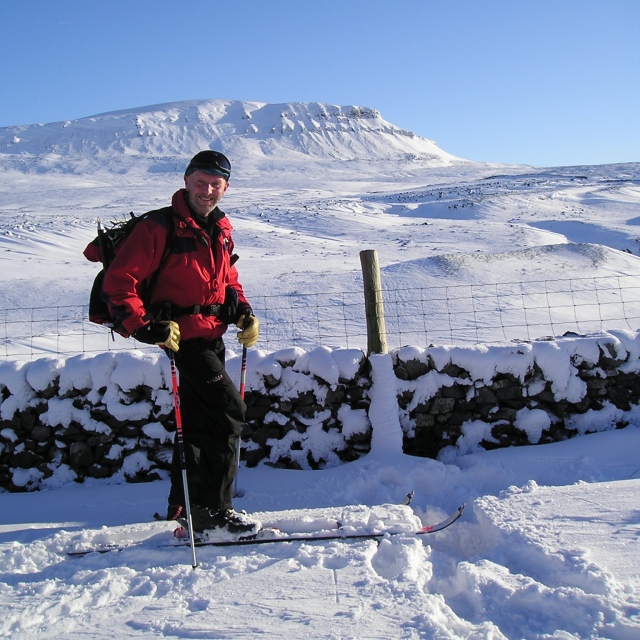 On the way down on the January trip

I've been mucking about in the mountains for longer than I care to mention. I started out by walking my local hills, then went on to rock climbing, mountaineering and skiing. Still doing it, and still getting a buzz. I'm now sharing the fun, through my guided walking business (Hillcraft Guided Walking) and by writing routes for other publishers, mainly Walking World and Discovery Walking Guides. Just to make sure I keep really busy, I am also currently a member of my local mountain rescue team.
View all posts by Paul Shorrock →
This entry was posted in 3. Yorkshire Dales and tagged mountains, Pen y Ghent, Pennine Way, photography, skiing, winter. Bookmark the permalink.