#70 – Castles in the Sky (Alport Castles near Ladybower)

‘The Tower’ and Alport Castles

After a successful raid last week on Mark Kelly’s blog in search of ideas for a walk, it was time to go plundering again.  I already had a walk in mind, from another Mark.  Mark’s Walking Blog had recently featured a trip to Alport Castles, a place I hadn’t even heard of never mind visited, but the photos were intriguing – a trip was definitely called for.

A steady walk through the woods above Ladybower Reservoir….

We started with a steady walk through the woods above Ladybower Reservoir that steadily became steeper.  The height gain continued as we passed Lockerbrook Farm Outdoor Centre, but soon after that the view changed as we had our first view of the Ashop Valley, which was to be our return route

The Ashop Valley below on the left

The path above the Ashop Valley was bone dry, a legacy of the long rainless spell we are enjoying at present (gardening friends might disagree).  It undoubtedly does get wet up there though, and before long we found ourselves on stone causeway paths – I’ve spoken out in favour of these causeways in the past, as being preferable to a bootful of mud, but the final section of causeway we followed (see photo) is weathering in so well that I couldn’t imagine anyone objecting to its presence.

Looking down towards ‘The Tower’

The author and ‘Mist’ having a closer look

The feature of ‘Alport Castles’ was created long ago by what must have been the biggest landslip in the British Isles, leaving unstable cliffs and ‘The Tower’.  The Tower looks very much like a man made rampart until you get close up, so I got close up!  Chris decided to bask in the sun instead, but ‘Mist’ came along for a look, ignoring an aggressive looking ‘Derby Ram’ along the way.  I press-ganged an innocent walker into taking a quick pic, then it was back to Chris and off downhill.

Off downhill, with ‘Mist’ in herding mode

…. ending up at Alport Farm

On the way down, ‘Mist’ went into herding mode as we caught up with a large group in front of us – she obviously prefers herding humans, rather than aggressive looking rams!  The descent continued for about 1 kilometre before we reached Alport Farm.  From there a good track took us down towards the A57 ‘Snake Pass’ road

Alport Castles from below

A closer view of the descent route we took

View down the Alport Valley towards the ‘Snake Pass’ road

This last part of the trip was a little contrived, as its main purpose was to take us back towards our start point by a different route.  We crossed the A57 (the most dangerous part of the day!) to a bridleway, followed by a muddy path above a leat taking water to Ladybower Reservoir.  As we walked we had a clear view of a ridge of high ground in front of us – our last obstacle.  While we were pondering this, the dog went into hunting mode – she stalks and pounces like a cat, but with less success.

On the bridleway, with the ridge in front of us still to be crossed 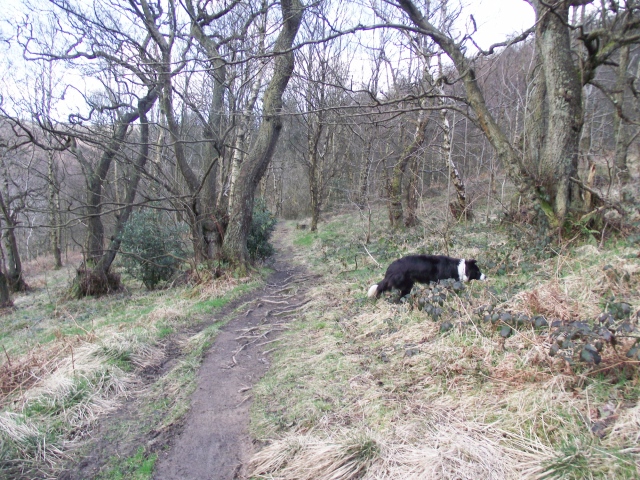 ‘Mist’ gives up herding for hunting 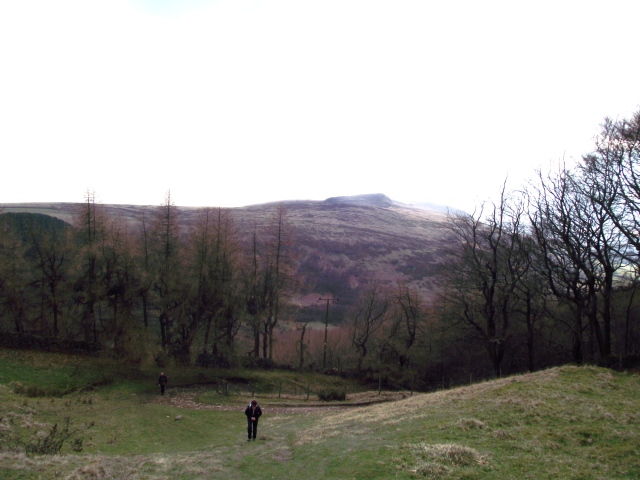 A bridge across the river, followed by another crossing of the A57, took us to a set of zig-zags leading up to the ridge above Hagg Farm.  Then, all of a sudden it was downhill all the way, following forest tracks back to the start point.  The ice cream at the car park was of the ‘shaving foam’ type, so we passed on that, rather than spoil what had been a good day – thanks Mark for the idea!

Through the forest, finishing as we began

p.s. For a good read, and perhaps some inspiration for walking routes, the following blogs are all good value – Mark’s Walking Blog, Halfway Hike, The Adventures of a Mountain Coward and Dixie.  For some stunning images, try Antiquity  and Adventures.  For another wander in the hills with me, me missus and t’dog see you here next week.  A fresh blog every Monday morning – click the ‘Sign me up’ link for an email notification.

I've been mucking about in the mountains for longer than I care to mention. I started out by walking my local hills, then went on to rock climbing, mountaineering and skiing. Still doing it, and still getting a buzz. I'm now sharing the fun, through my guided walking business (Hillcraft Guided Walking) and by writing routes for other publishers, mainly Walking World and Discovery Walking Guides. Just to make sure I keep really busy, I am also currently a member of my local mountain rescue team.
View all posts by Paul Shorrock →
This entry was posted in 4. Northern England and tagged Border Collie, hillwalking, Peak District, photography. Bookmark the permalink.