When I first visited Wales, many years ago, I found the Welsh language to be confusing to say the least, with most of the words looking like a bad game of scrabble.   It started to make more sense when I started walking with Chris, who grew up in North Wales, and she soon started to correct my typically bad ‘English’ pronunciation of Welsh words.

I’m still a long way from holding a meaningful conversation, but I can be polite and enquire after your health in Welsh – even more useful to me, I have a growing vocabulary of words used in mountain and place names, and the language is remarkably straightforward to understand and pronounce once you get stuck in.  So, when I went out last week, I knew what Pen Llithrig y Wrach and Pen yr Helgi Du translated as.

View to Ogwen, with a splash of sun on Y Garn 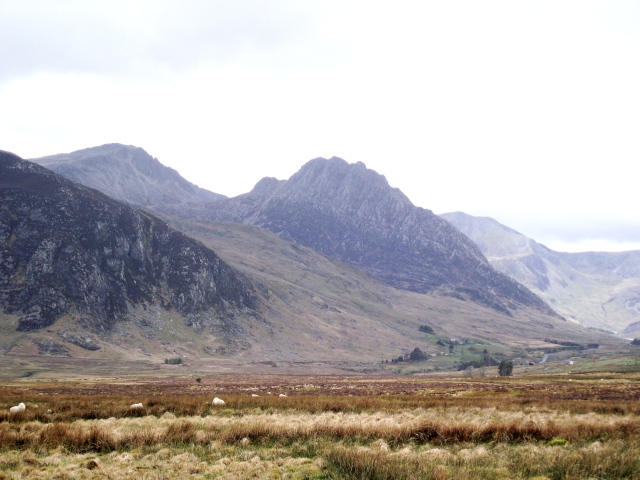 Tryfan, with the North Ridge descending to the right

Most Welsh place names are descriptive and to the point.  For example, Mynydd Mawr means ‘Big Mountain’ – simple enough!  Foel Fras is ‘The Broad Rounded Hill’, Crib Goch is ‘The Red Ridge’, Tryfan is ‘Three Peaks’ or ‘Three Tops’, and so it goes.  So, I wondered what was going on the day that someone named a mountain ‘The Slippery Peak of the Witch’!  Perhaps I would find out. 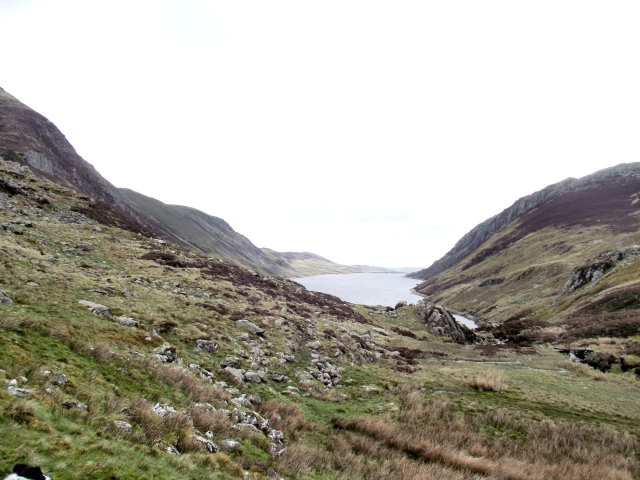 Whilst researching, I came across a suggestion that the Llithrig (Slippery) part of the name could be due to the boggy slopes of the mountain – I probably should have paid more attention to that bit, though to be fair I have come across mountains that have been far boggier.  The ‘Witch’ (Wrach) part of the name might be influenced by the pointy nature of the hill, like a witch’s hat.  Or perhaps someone just had a bad day!

Y Garn in the distance, with sun picking out the descent ridge of Y Braich in the foreground

I set out from Capel Curig (‘Curig’s Chapel’, but you’ve probably worked that out by now) and soon left the A5 road behind me as I set out up ‘The Slippery Peak’.  However, Pen Llithrig wasn’t slippery as such, just soggy – Pen Gwlyb (‘The Wet Peak’) was more like it, but you have to admit that Llithrig has more of a ring to it! 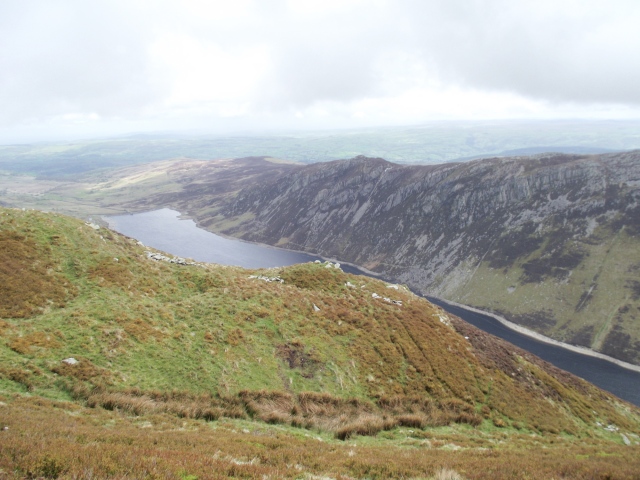 There were some great views towards Ogwen, with Tryfan and Y Garn standing out well.  If the views were good, the quality of the light was disappointing – I’ve learned a lot about photo editing over the past year, but light is a basic requirement for good images, and the light for this trip was flat and grey. 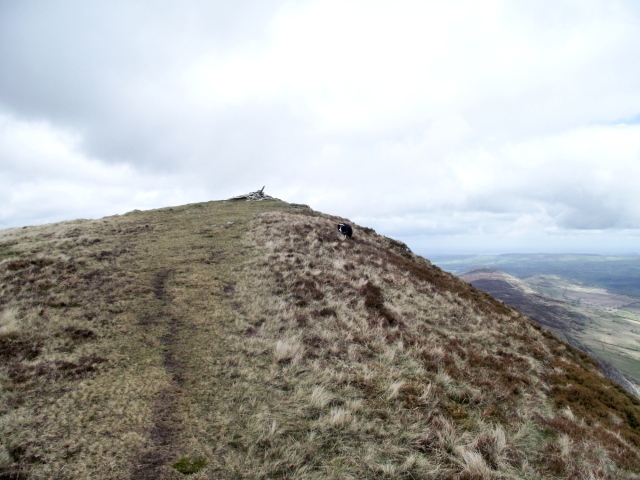 The plod over the soggy moor was followed by a steep pull up to the summit of Pen Llithrig y Wrach, with views to Llyn Cowlyd reservoir on one side, the Ogwen peaks on the other side and the unfolding panorama of the hills of the Carneddau straight ahead, with Carnedd Llewelyn centre stage.  Carnedd Llewelyn is the highest of the mountains of the Carneddau and the third highest in Wales at 1064 metres (3490 ft), but it wasn’t on today’s menu. (See #24) 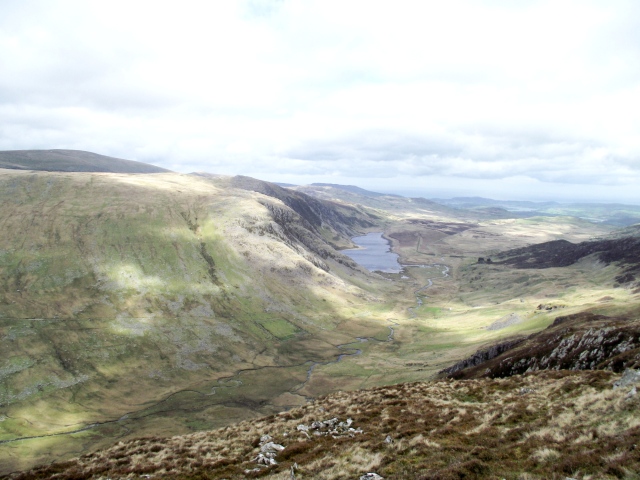 Looking north to the reservoir of Llyn Eigiau 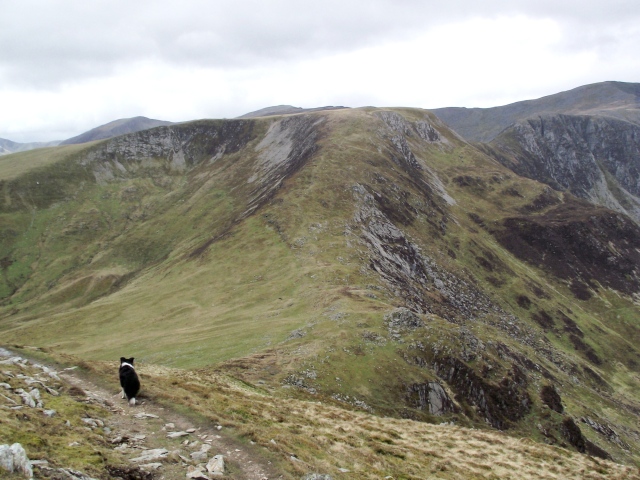 The top of Pen Llithrig was marked by a modest cairn, but was a witch-free zone!  The next summit of Pen yr Helgi Du was still waiting, though.  As Pen Llithrig had failed to produce a witch I was pretty sure that ‘The Peak of the Black Hunting Dog’ was likely to be dog-less, but fortunately I had brought my own along, if a black and white Border Collie called ‘Mist’ qualifies.

One of the summit cairns of Pen yr Helgi Du 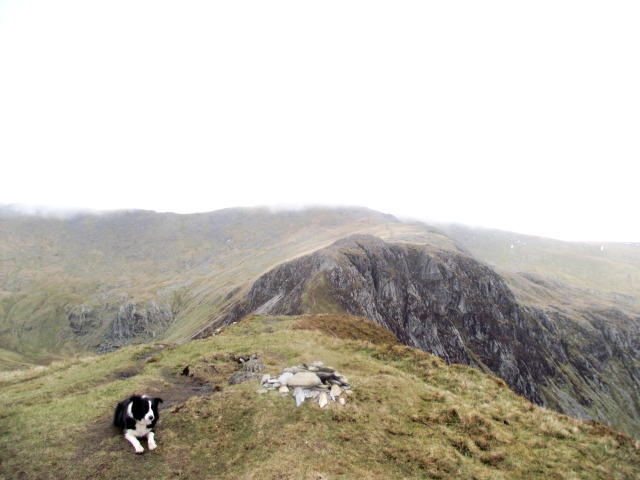 The Black Hunting Dog didn’t show, but several cairns did, including one half-hearted pile of stones overlooking the gap to the rock-climbers crag of Craig yr Ysfa. An old story in British mountaineering lore tells that the crag was first recognized as having climbing potential at the end of the nineteenth century, by one of the famous Abraham brothers, who saw the crag from the Lake District using a telescope. True or not, it’s a good tale! 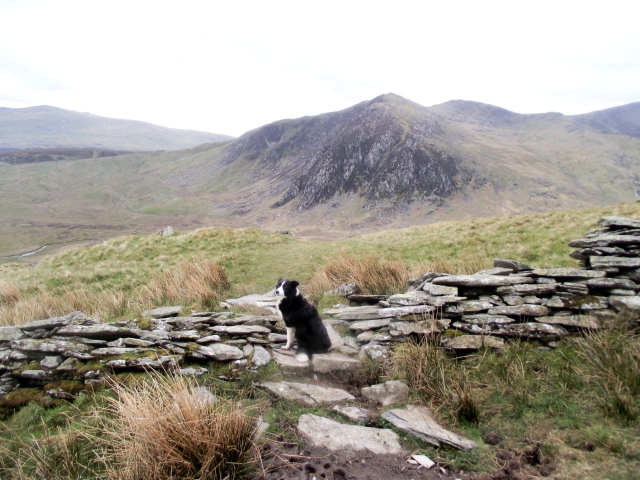 On the way down the ridge of Y Braich

The old road, quiet and away from the busy A5

As neither the Witch nor Black Dog were in residence, it seemed a good time to be heading homewards.  A speedy descent down the ridge of Y Braich (‘The Arm’) took ‘Mist’ and I down to the valley, and a yomp back to Capel Curig via the old road, now superseded by Thomas Telford’s A5.  We just beat the rain to the finish line.

I've been mucking about in the mountains for longer than I care to mention. I started out by walking my local hills, then went on to rock climbing, mountaineering and skiing. Still doing it, and still getting a buzz. I'm now sharing the fun, through my guided walking business (Hillcraft Guided Walking) and by writing routes for other publishers, mainly Walking World and Discovery Walking Guides. Just to make sure I keep really busy, I am also currently a member of my local mountain rescue team.
View all posts by Paul Shorrock →
This entry was posted in 5. North Wales and tagged Carneddau, hillwalking, mountains, photography, Snowdonia. Bookmark the permalink.