The view up the ‘Lost Valley’ in Glencoe

As you drive down Glencoe towards Loch Achtriochtan, you can’t help but notice the impressive rock architecture rising above you on both sides. To the north lies the airy ridge of the Aonach Eagach (see post #52) and opposite lie the Three Sisters. It’s clear that these are big hills but the one that you will not see is hidden from view by its neighbours – Bidean nam Bian, the highest peak in the old county of Argyll at 1,150 metres (3,773ft). 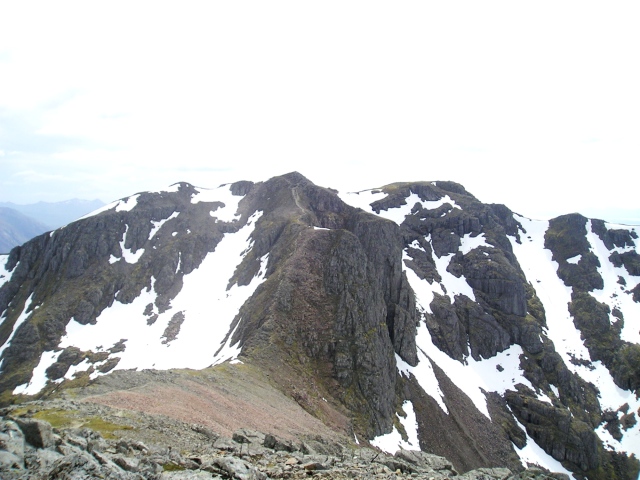 Our recent house move has located us in a lovely spot in North Wales, with hills on the doorstep, and the mountains of Snowdonia just down the road, less than an hour away.  A price had to be paid, though – the business of moving meant that a planned trip to the Northwest Highlands of Scotland had to be cancelled.  As a consolation prize, I retrieved this outing from the archives, from May 2008. 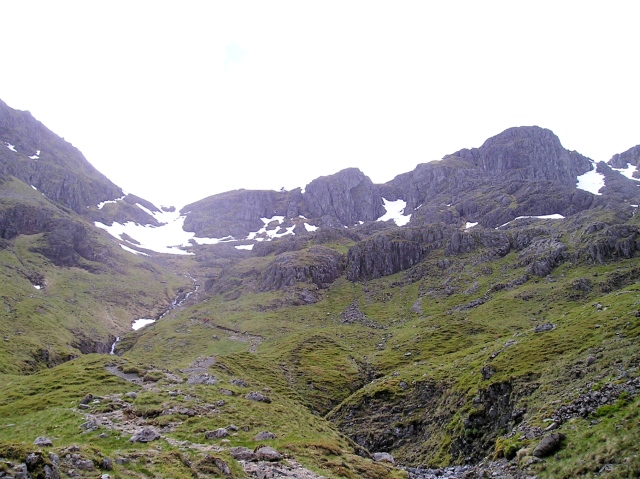 The large snow slope (on the left) on our intended route

Our day on Bidean nam Bian had started from the valley, with the intention of walking up the ‘Lost Valley’ to the col between Bidean and Stob Coire Sgreamhach, an easy enough route to follow.   As we approached it became obvious from as far away as two kilometres that there was a large snow slope right across our route, and as it was almost June we were not carrying ice axes or crampons, 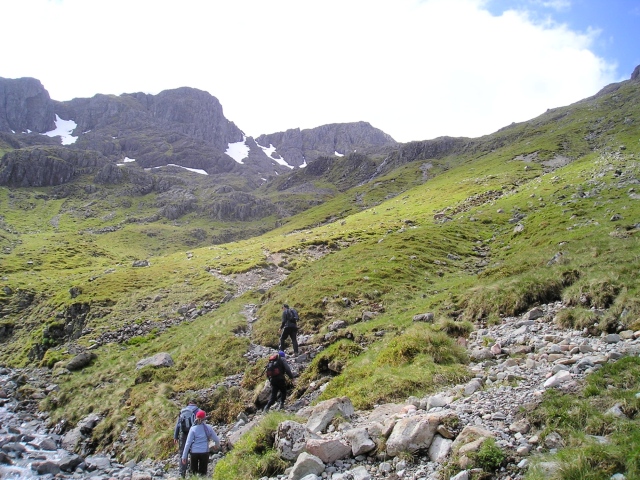 The start of the diversion

It was difficult trying to gauge the size or angle of the slope from a distance, but it soon became apparent from watching the route that all the small ‘ant-like’ figures that tried their hand on the slope had turned back.  Bob and I applied several decades of mountain cunning and wisdom to the problem, and came up with the idea of a diversion.

Getting steeper as we headed up to the col

In fact, we spent so long debating the issue that another group listened in and pinched our idea before carrying out a crafty overtake – we carried on behind them up ground that gradually became steeper.  A gap in a line of crags took us to the col between Bidean and Stob Coire nan Lochan, on what had originally been our intended descent route down the North East Ridge of Bidean.

Near the summit of Bidean on the North East Ridge

The North East Ridge was nicely rocky after the grassy route to the col, and we were soon on the summit of Bidean, which was remarkably quiet.  The views were simply outstanding with a 360 degree panorama.

The view northwest towards Loch Linnhe and Loch Leven

Bob Stow on the summit of Bidean nam Bian

The author – Ben Nevis can be picked out, immediately to the right of the cairn in the far distance.

Our return route, down the North East Ridge of Bidean to Stob Coire nan Lochan

After enjoying the view, and playing ‘spot the mountain’ it was time to head back.  We reversed the North East Ridge down to the col, then carried on up again to Stob Coire nan Lochan.  The route from there followed the top of the cliffs of South Buttress and Pinnacle Buttress.

Just before Aonach Dubh we took a right turn to drop down into Coire nan Lochan, with the cliffs that had been below us now high above – the area isn’t much use to the rock climber, but in winter it is one of the best ice-climbing venues in Glencoe.  From there we followed the path above the stream to head back down to the valley, passing an impressive waterfall on the way. 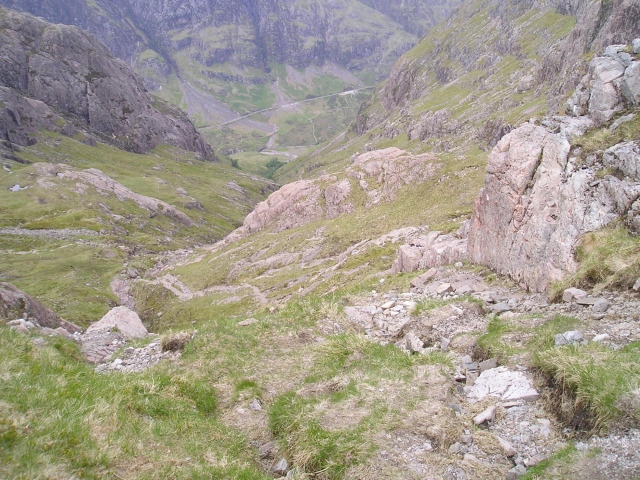 Almost back in the valley with a late group heading upwards

Descents in the Highlands tend to be long, and frequently surprise newcomers, but being ‘old hands’ we made good progress back down to the valley.  The strong winds that had been forecast didn’t materialise, but a stiff breeze kept the midges grounded.  A night in the Clachaig Inn was a perfect end to a perfect day.

The ‘Lost Valley’ – Stob Coire Sgreamhach on the left, Bidean just peeping through on the right

I've been mucking about in the mountains for longer than I care to mention. I started out by walking my local hills, then went on to rock climbing, mountaineering and skiing. Still doing it, and still getting a buzz. I'm now sharing the fun, through my guided walking business (Hillcraft Guided Walking) and by writing routes for other publishers, mainly Walking World and Discovery Walking Guides. Just to make sure I keep really busy, I am also currently a member of my local mountain rescue team.
View all posts by Paul Shorrock →
This entry was posted in 1. Scotland and tagged Glencoe, hillwalking, mountaineering, mountains, photography, waterfall. Bookmark the permalink.

25 Responses to #84 – Bidean nam Bian, the hidden giant of Glencoe