#126 – More wanderings with the dog on Clwydian Hills.

Moel y Parc from the southwest

The recent snow, although a curse for some, was a blessing for those of us who like a little bit of ‘white’ on our hills.  The mountains of Snowdonia and the Lake District have been Alpine in all but scale and altitude, giving some great outings.  Even the hills local to where we live have been transformed under a white blanket, and a simple dog walk felt like something much bigger. 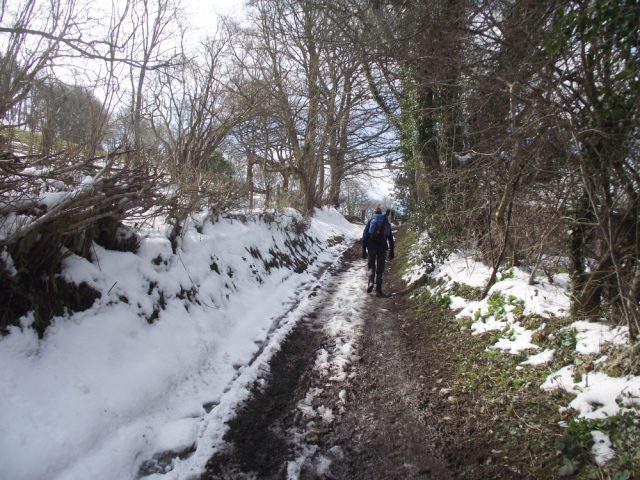 Setting out from near Bodfari

More snow as we got higher ….

Living on the edge of the Clwydian Hills of North-East Wales gives opportunities for some fairly amazing dog walks.  Since moving here almost a year ago we’ve managed to explore some of the higher ground of the Clwydians, but one was still to be ticked off, so instead of what would once have been a dog walk in a park, we found ourselves walking the dog on Moel y Parc.

Getting higher, above the farmland …. 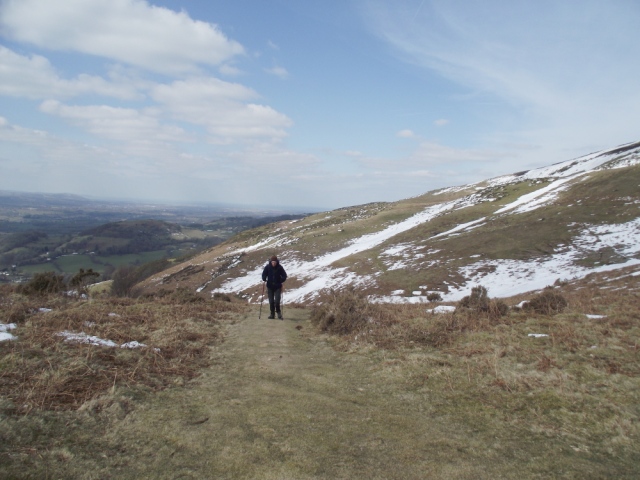 …. with the snow appearing and disappearing

We had set off from the village of Bodfari, and before long ran into the evidence of the March blizzards.  Although the snow was much in evidence, even at a low level, it was mainly confined to what had been deep drifts on the paths, in exactly the places we wanted to walk!

A closer view of the same area 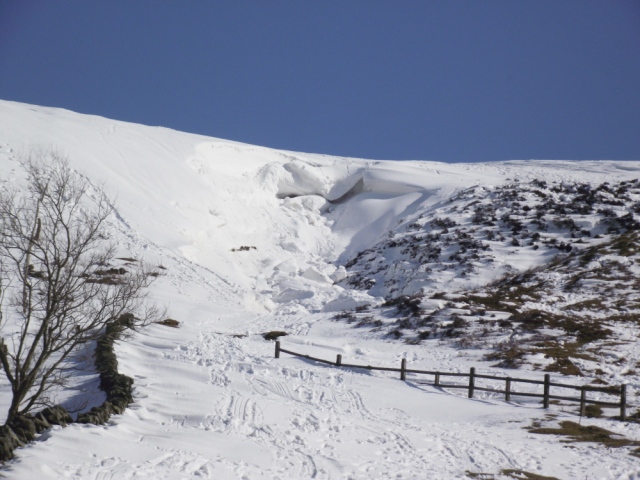 On the approach to the summit there was a dodgy looking area on one of the remaining snowfields, with some evidence of recent slips.  We left these alone, though I did take the opportunity later on to drive round to look at the small avalanche on the Offa’s Dyke Path at Moel Llys y Coed (see post #124)– these conditions probably only occur once in a couple of decades, but were a reminder that winter conditions can be challenging even on hills of modest height. 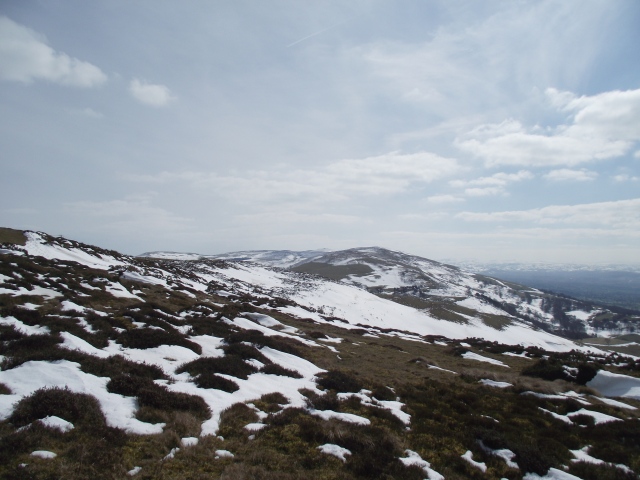 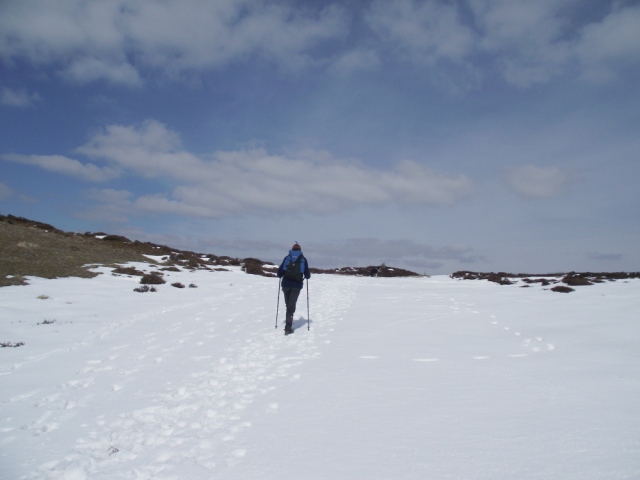 Getting nearer to the summit ….

…. with the top in sight

The route gave great views over the Clwydian Range to the southeast, as well as the distant mountains of Snowdonia.  Although the snow was deeper here it was no real obstacle, and we were soon on the summit. 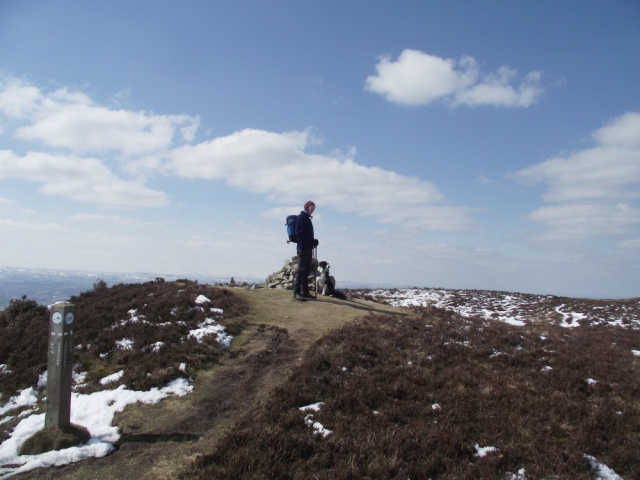 Ancient burial mound at the summit of Moel y Parc

The very obvious Moel y Parc television mast is a mere 500 metres from the summit, and as well as serving the communities of North-East Wales, its transmissions reach Liverpool, Manchester, parts of Lancashire and Cheshire and some coastal areas of Cumbria and the Isle of Man.  It was also recently included in a blog featuring the adventures of a group of ‘Mast Climbers’, who had scaled the 700ft ladder up the side of the mast – Chris and I settled for the less dangerous ancient burial mound at the summit. 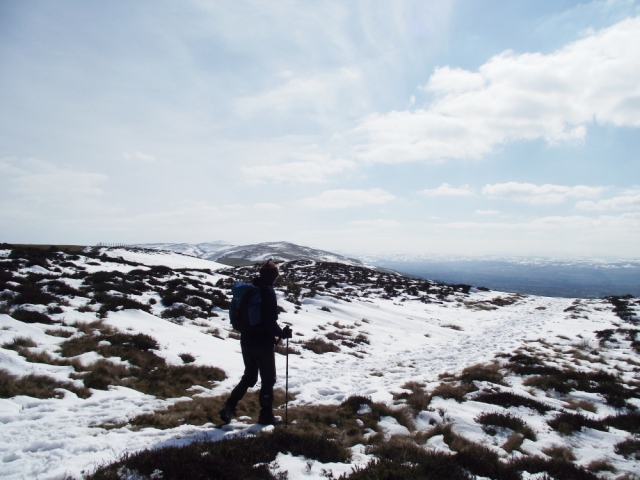 On the way down, and out of the cold east wind

Wind blown tree on the ridge

A cold east wind didn’t encourage loitering at the top, and we were soon on the way down to return to Bodfari by a different route.  The winds around here are generally from the west, and on the descent we spotted a tree permanently bent over by the relentless force of those Westerly’s.  A traversing path round the base of the hill ended the day – not quite the adventures shown in recent posts, but not bad for an afternoon dog walk.

Good countryside for walking the dog

p.s.  It’s worth pointing out that climbing high-powered transmission masts as mentioned in the text above is definitely not a good idea – being microwaved at a height of 700 ft above the ground doesn’t sound like the kind of thing to promote a long and healthy life!

I've been mucking about in the mountains for longer than I care to mention. I started out by walking my local hills, then went on to rock climbing, mountaineering and skiing. Still doing it, and still getting a buzz. I'm now sharing the fun, through my guided walking business (Hillcraft Guided Walking) and by writing routes for other publishers, mainly Walking World and Discovery Walking Guides. Just to make sure I keep really busy, I am also currently a member of my local mountain rescue team.
View all posts by Paul Shorrock →
This entry was posted in 5. North Wales and tagged Border Collie, Clwydian Hills, hillwalking, photography, snow. Bookmark the permalink.

6 Responses to #126 – More wanderings with the dog on Clwydian Hills.