My route up Cwm Glas

Of the 6 million visitors each year to the Snowdonia National Park, quite a few decide to walk up Yr Wyddfa (Snowdon).  Being the highest peak in Wales and England at 1085 metres (3560 ft) is one good reason, but the variety of routes up to the summit is also a factor. There are 6 named paths to the top – The PYG Track, The Miners Track, The Watkin Path, The Rhyd Ddu Path, The Snowdon Ranger Path and the Llanberis Path, all of them great routes apart from the last which is an unremitting slog whichever way you look at it!

Thankfully most visitors stick to one of the six named paths, leaving the hidden and less frequented routes to those who like a bit of peace and quiet. What’s that … peace and quiet? On Yr Wyddfa? No problem, you just have to shop around a bit! One personal favourite is the South Ridge running up from Bwlch Cwm Llan, but if you want to experience a route on the wild side of the mountain there is one serious contender – Cwm Glas Mawr and Cwm Glas.

…. with a couple of climbers in action (dead centre)

Looking back down into Cwm Glas Mawr

In Welsh, cwm means valley, usually a bowl shaped valley or cirque, so Cwm Glas Mawr means ‘Big Green Valley’ with Cwm Glas or ‘Green Valley’ lying above. The most striking thing about the cwm from starting out is the lack of paths, and the majority of people who come up this way are climbers, with most climbing being done in winter – The Llanberis Pass just below the cwm has some of the finest rock climbing in the country without a long walk in, so the crags of Cwm Glas Mawr don’t see a lot of traffic, though I did see a couple of climbers in action on this trip.

About 1.7 kms (1 mile) and 480 metres (1575 ft) height gain from my start point, I arrived at Llyn Glas (Green Lake) a tiny lake with an even smaller island. If I had been carrying a tent I probably wouldn’t have bothered going any further, and a repeat trip to camp up there in the near future is certainly on the cards. Border Collie ‘Mist’ obligingly posed for a photograph to help show scale, but then it was onward and upward 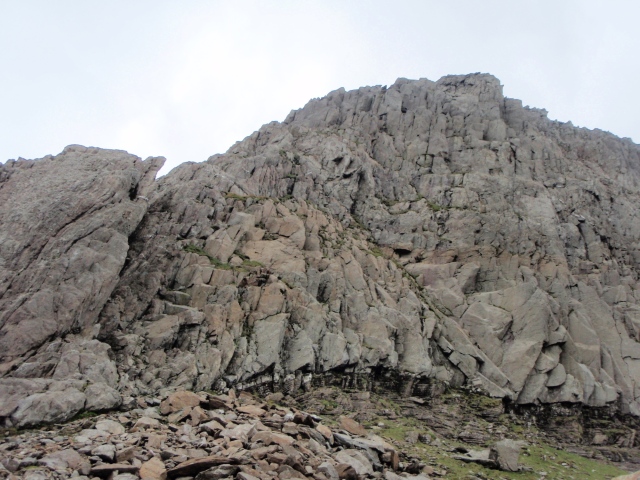 Above the llyn is the magnificent mountain crag of Clogwyn y Person, or in English ‘the Parson’s Cliff’. It’s over thirty years since I was last on the classic ‘Clogwyn y Person Arete’, a great route on rock that winds its way to join part of the Snowdon Horseshoe above. I was in the Royal Marines at the time, and had a months work as an instructor at the Joint Services Outdoor Centre at Llanrwst – the group I was with on the arête were RAF trainee PTIs, and we did the route unroped in heatwave conditions. Great days!

Looking back towards Clogwyn y Person

I finished reminiscing and turned my attention to how I was going to exit Cwm Glas. From here this was all new ground to me now, but combining the map view with what I could see on the ground, the way looked pretty obvious. I passed another tiny lake, Llyn Bach (which appropriately means ‘Small Lake’), before heading steeply upwards to reach the upper edge of the cwm.

Finally at the head of the Cwm

The view to the northwest – the Snowdon Railway and ‘civilisation’

The view back into Cwm Glas – wild and deserted

The two opposite views at the top couldn’t have been more different – to the northwest was the unmistakable line of the Snowdon Railway with a long distance view to Llanberis below, whilst to the southeast the view was down into the wild and deserted Cwm Glas. 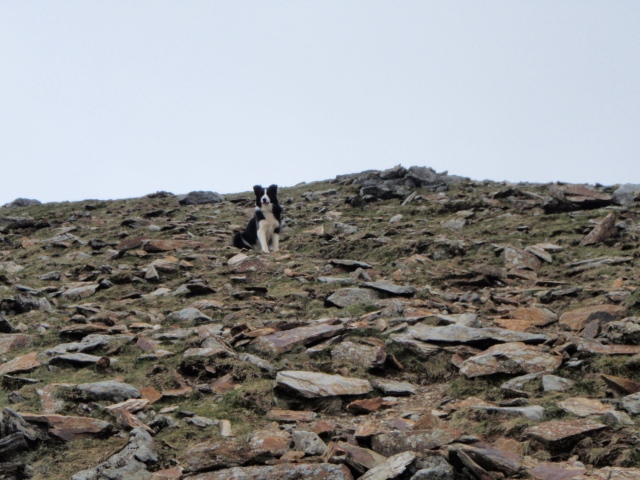 This was no time for lazing about though – it was getting close to the time that we usually feed ‘Mist’, and she was well in the lead as we finished off over Garnedd Ugain and the summit of Yr Wyddfa. It didn’t take long to be reminded that I was on the busiest and most popular Mountain in the UK as I mingled with the crowds on top. A swift exit via the Miners Track was a popular choice – well, at least for a hungry Border Collie

Last view into the Cwm, with the Llanberis Pass road far below

I've been mucking about in the mountains for longer than I care to mention. I started out by walking my local hills, then went on to rock climbing, mountaineering and skiing. Still doing it, and still getting a buzz. I'm now sharing the fun, through my guided walking business (Hillcraft Guided Walking) and by writing routes for other publishers, mainly Walking World and Discovery Walking Guides. Just to make sure I keep really busy, I am also currently a member of my local mountain rescue team.
View all posts by Paul Shorrock →
This entry was posted in 5. North Wales and tagged Border Collie, hillwalking, mountains, photography, Snowdonia, Yr Wyddfa. Bookmark the permalink.