#219 – Llyn Anafon and Drum in the Northern Carneddau

Looking down towards Llyn Anafon from the slopes of Drum 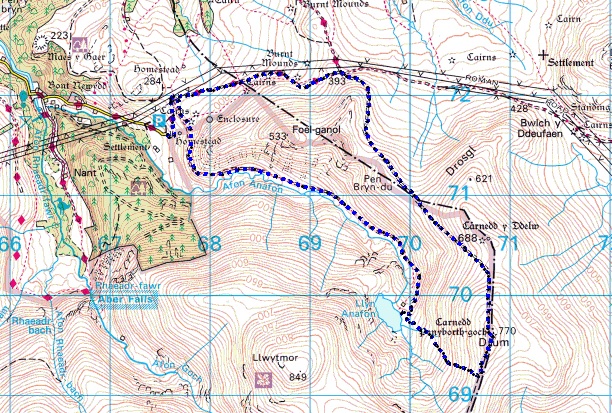 The route – Anti-clockwise to Llyn Anafon then on to Drum 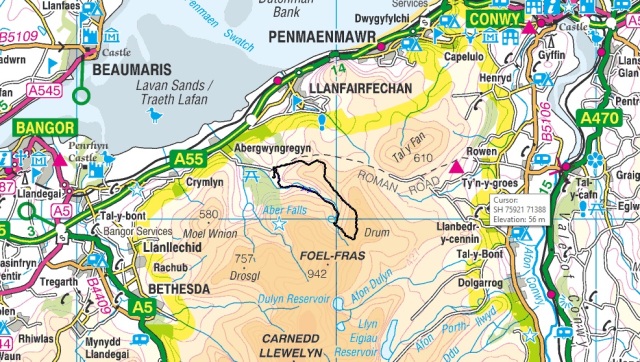 The Northern Hills of the Carneddau

Although I’m usually up for a long mountain day, me missus enjoys her days in the hills when she isn’t being scared out of her wits or setting off on a long ‘yomp’ into the backwoods in crappy weather.   So, that’s a nice easy brief then! 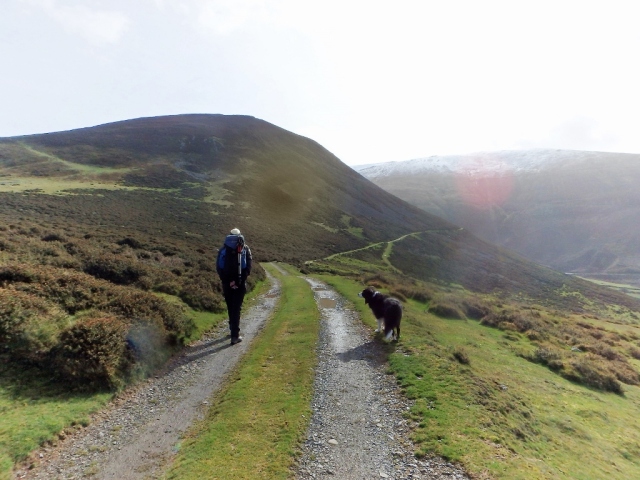 Setting out up the track above Afon Anafon

The early weeks of 2017 had the usual storms in from the sea, with high winds and loads of rain rather than snow, so a calm day with a sprinkling of snow on the tops was enough reason to get out.  In fact, it would have been hard to come up with an excuse not to, so with all the boxes ticked, a trip to the hills of the Northern Carneddau was in order. 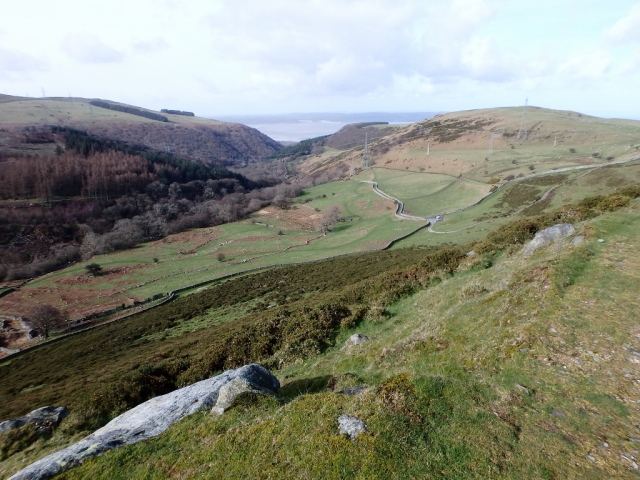 Looking back towards Abergwyngregyn and the coast 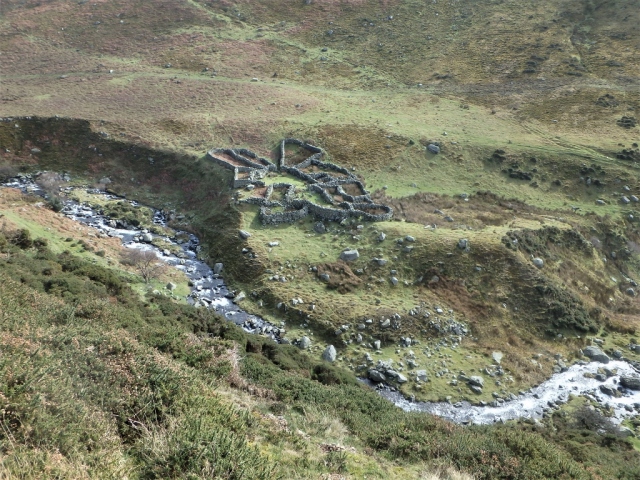 Old sheep folds below the track

The last time Chris and I (plus Border Collie ‘Mist’ of course!) came up this way was late autumn 2014 (see post #167).   There is a good track heading up from the road-head beyond the village of Abergwyngregyn on the coast and this gives quick and easy access to a lovely hidden corner of the Carneddau. 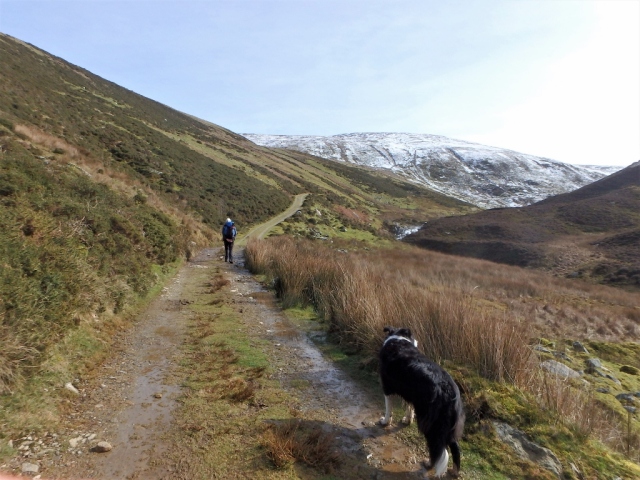 Still heading up the track …. 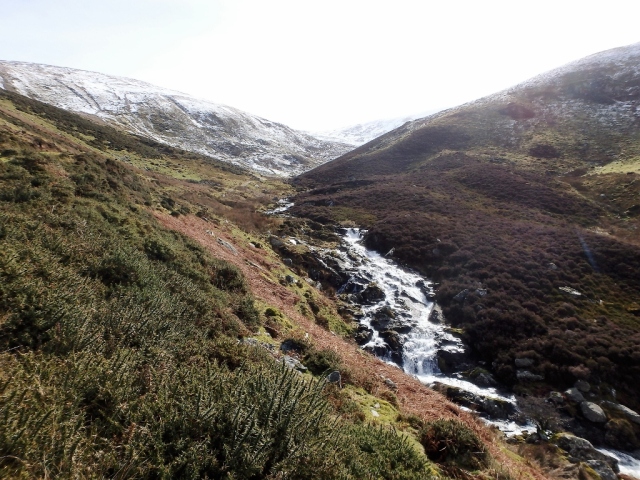 …. with lots of water in the stream below 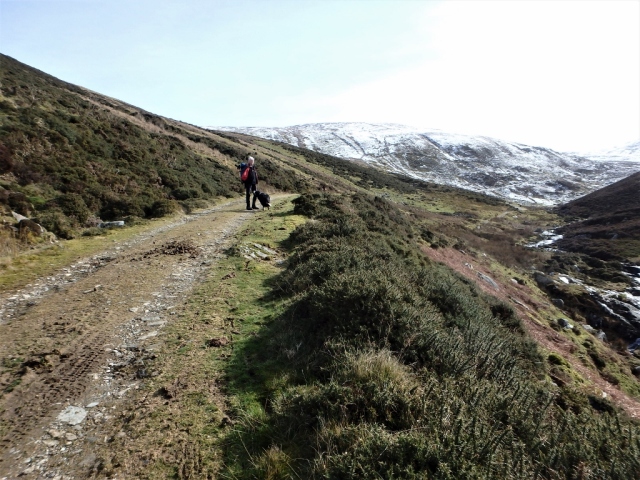 Drum comes into view ahead

It’s about 4.3 Kms from the carpark to the shoreline of Llyn Anafon with a height gain of about 330 metres, so it’s hardly what you would regard as extreme.   The track follows the stream of the Afon Anafon in a deep valley, with the views beyond restricted, so it was some time before our objective, the 770 metres (2525 ft) summit of Drum, came into view.

The ‘picnic site’ and the view across the lake of Llyn Anafon …. 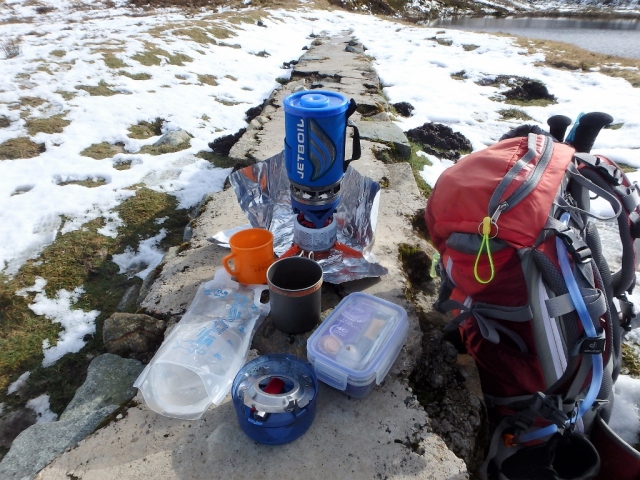 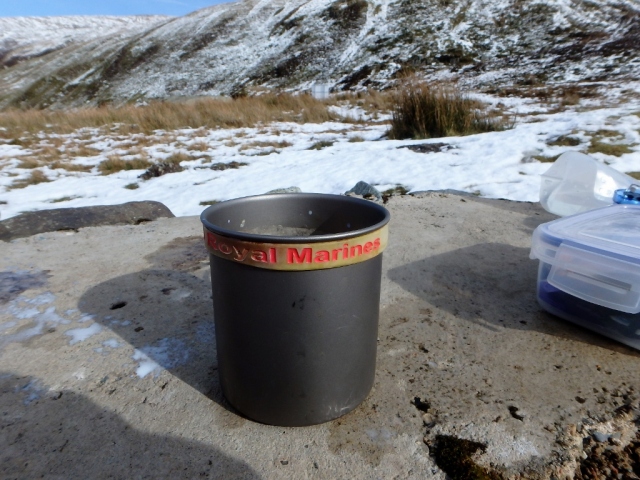 …. including the favourite mug!

We weren’t in a rush and we can please ourselves nowadays as to how the day goes, so when we got to Llyn Anafon it was picnic time.   Out came the trusty ‘Jetboil’ stove and instead of an indifferent cup of coffee from a flask we had a fresh brew.   There might even have been a small nip of spiced rum (‘Sailor Jerry’ if you must know) from a different sort of flask, but as I said, we can please ourselves nowadays. 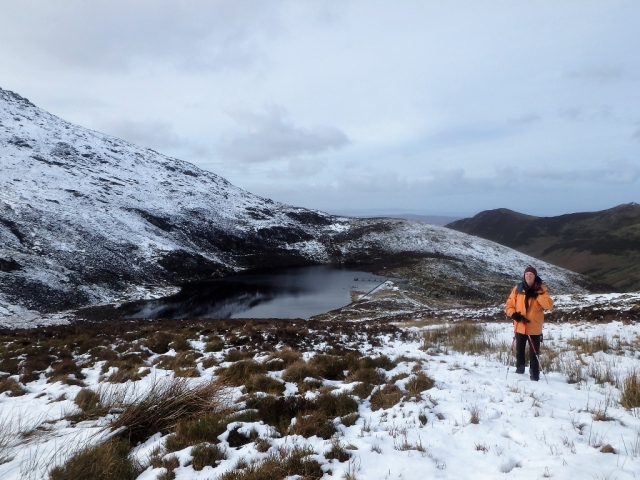 Leaving Llyn Anafon behind and heading up into the snow

The view across to Llwytmor

Having had a bit of a dawdle up from the car park, it was now time to put some effort in (Not TOO much, though – did I mention that we can please ourselves nowadays?)   We had a total height gain of almost 250 metres over 1.25 kms in front of us, which works out (roughly) as a 1-in-5 (20%) slope. 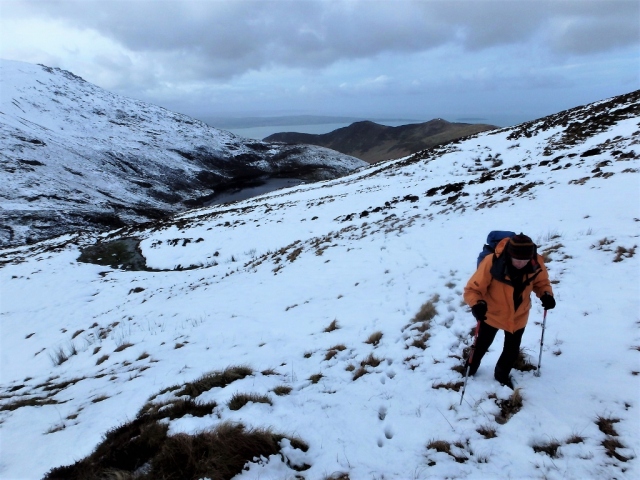 Things start to get steeper …. 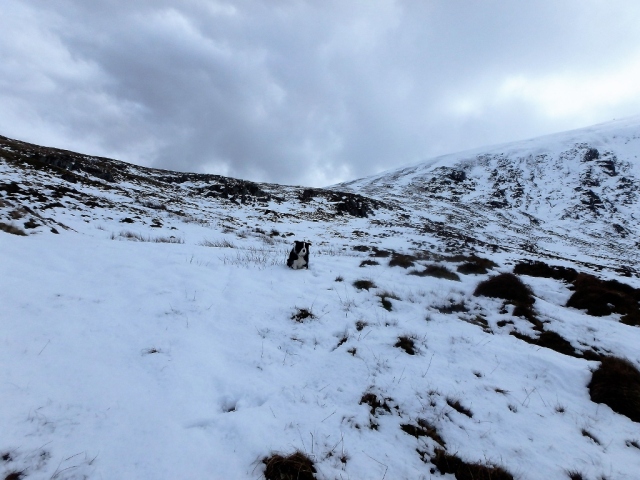 …. but as usual, Border Collie ‘Mist’ is ahead and waiting

Things get steeper towards the top though, and there was a height gain of about 150 metres over the last 440 metres of distance, which comes out at about a 1-in-3 (33%) slope.  Added to that was an accumulation of soft, wet snow, so there much slithering about on the steeper stuff – things remained good humoured, but I’m sure I caught the dog laughing at us! 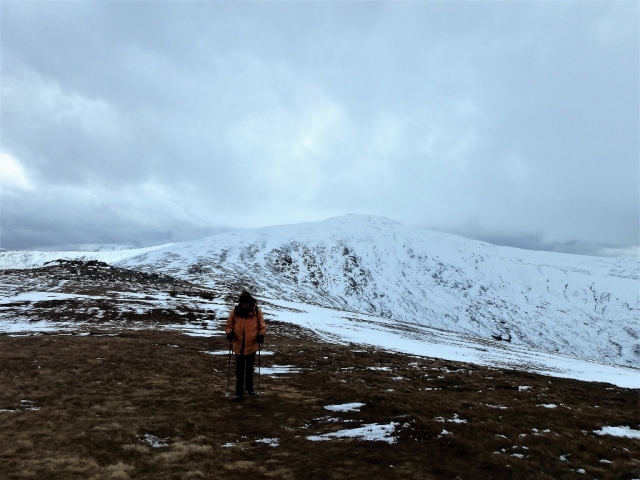 On the bwlch (col) at last – Foel Fras behind 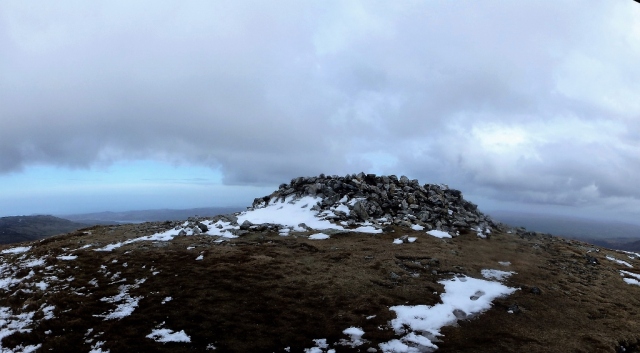 The ancient cairn on the summit of Drum

From the bwlch (col) above the slope, it was an easy stroll to the summit of Drum.   I had intended to get some pics of the what remains of the site of the radar station that had been located here in the mid 1950’s, and which I mentioned in post #217, but all was covered in snow. 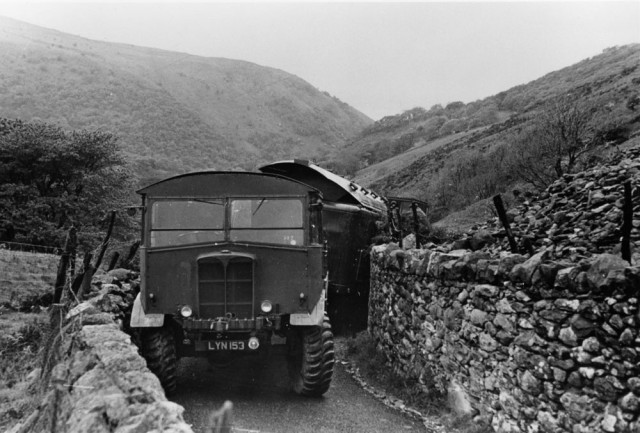 The system was code-named ‘Blue Joker’ and was designed to test radar signal processing from as high a point as was reasonably practical, in order to minimise sea wave interference.  The setup included two mobile cabins, of which one was a modified ‘Type 4 Mk 7 Mobile Radar Unit’ to house the equipment and the other a domestic unit for use by the staff.  In addition, there was a large diesel electric generator.

The convoy at the start of the mountain track

The Royal Electrical and Mechanical Engineers (REME) built the access road from Aber to the site assisted by local council employees, and contemporary photos show that the stone walls alongside the road near to the village were comprehensively trashed!  A heavy ‘AEC Matador’ truck was used to haul the radar cabin, with the domestic unit sitting on the back of an American ‘Diamond T’ tank transporter tractor unit. 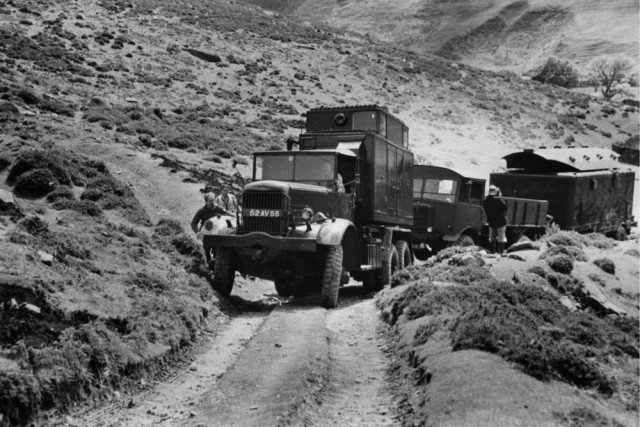 It was during the radar trials that the ‘Canberra’ bomber was lost in December 1957 (post # 217).  Although the trials were a success, the Blue Joker project was wound up in the mid-1960’s when the perceived threat changed from manned Soviet bombers to Intercontinental Ballistic Missiles, which this type of radar could not track. 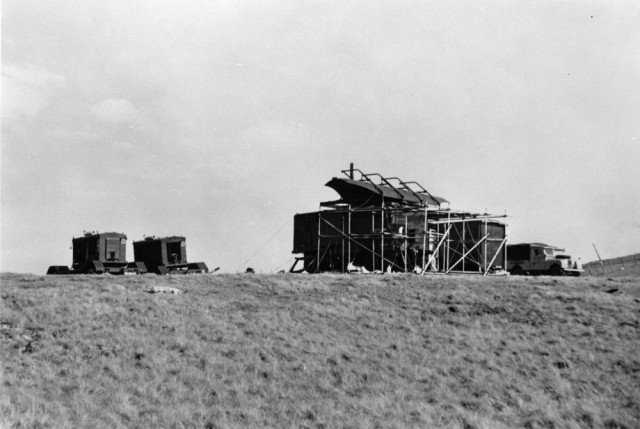 The mobile radar site at the summit of Drum

All that remains now is an area of hardcore that looks immediately out of place at an altitude of 750 metres on a Welsh mountain top – a bit more careful searching will reveal a couple of concrete blocks and a few heavy-duty steel stakes used to anchor the equipment down in the high winds – they had a lot of those! 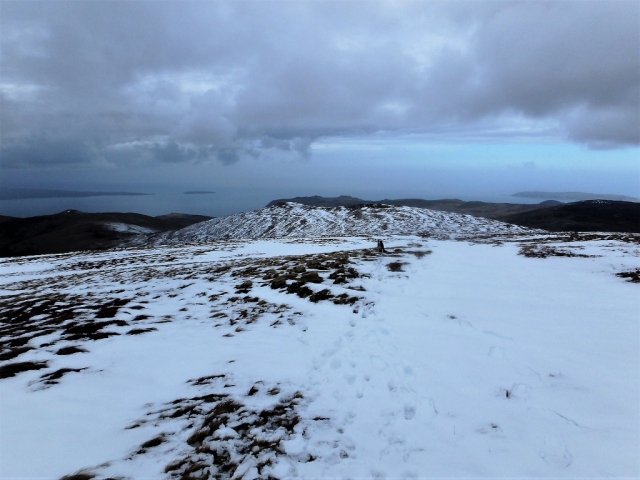 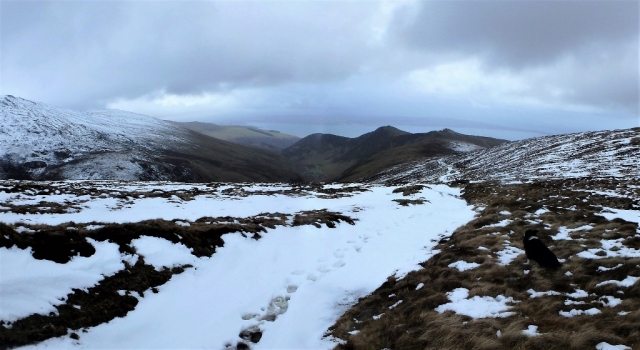 …. with the track well ‘snowed in’

One legacy of the huge amount of work that was put in to build the access road is a good track down from the summit of Drum, which since then must have been trod by thousands of weary walkers heading down from the Carneddau – being easy and downhill, it may even have saved a few lives over the years, though the upper part was completely snowed in for our descent.   We still made good speed though – we had a hungry Border Collie to feed! 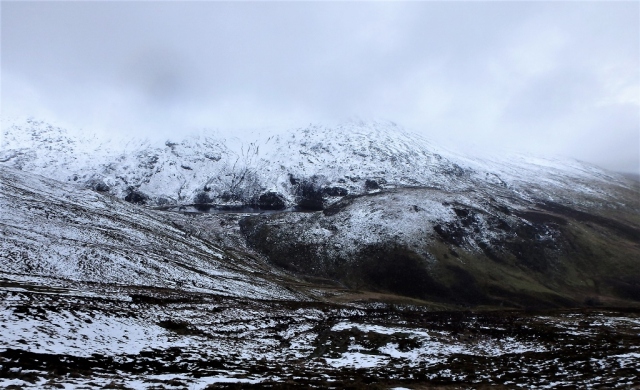 A last view of Llyn Anafon from the track heading down

As often happens on a day out in the mountains, I was already plotting the next trip out, but I wasn’t expecting to be back out here three days later on a very different mountain day – you can read about it here in a couple of weeks. 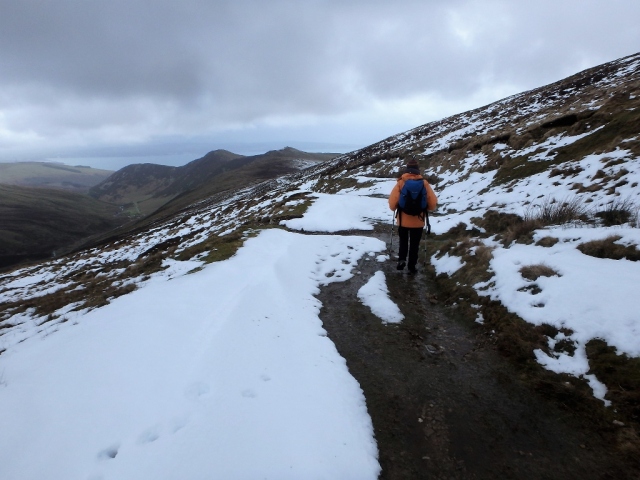 Text and images © Paul Shorrock with the exception of the ‘Blue Joker’ images.

p.s. The ‘Blue Joker’ pics are especially for fellow blogger Mountain Coward, who may know much more about the radar equipment shown from her days in the Army, though the setup in the photos was probably well obsolete before her time.

I've been mucking about in the mountains for longer than I care to mention. I started out by walking my local hills, then went on to rock climbing, mountaineering and skiing. Still doing it, and still getting a buzz. I'm now sharing the fun, through my guided walking business (Hillcraft Guided Walking) and by writing routes for other publishers, mainly Walking World and Discovery Walking Guides. Just to make sure I keep really busy, I am also currently a member of my local mountain rescue team.
View all posts by Paul Shorrock →
This entry was posted in 5. North Wales, Aircrash Sites and tagged Border Collie, Carneddau, hiking, hillwalking, mountains, photography, snow, Snowdonia, winter. Bookmark the permalink.