May 2019, and the Scottish trip was going well.   For the second year running, we had picked some of the many bothies in the Highlands as a hook to hang a walk on, and Ryvoan, Duror and Craig bothies had all been great choices.   The one I really wanted to visit though was Shenavall – even the name hinted of great things to come, but the classic photo of Shenavall with the mountains of Fisherfield Forest as a background made it a ‘must do’ trip. 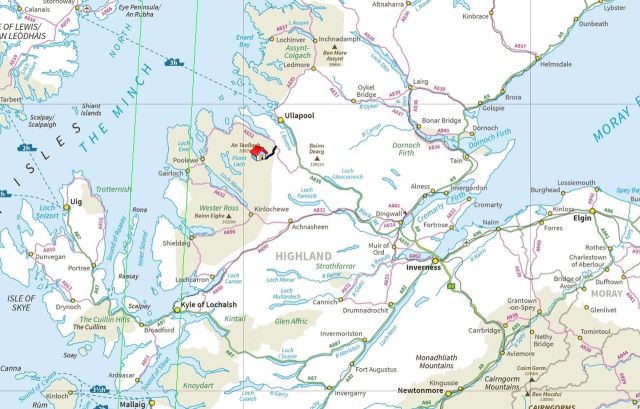 Wester Ross and the North-West Highlands 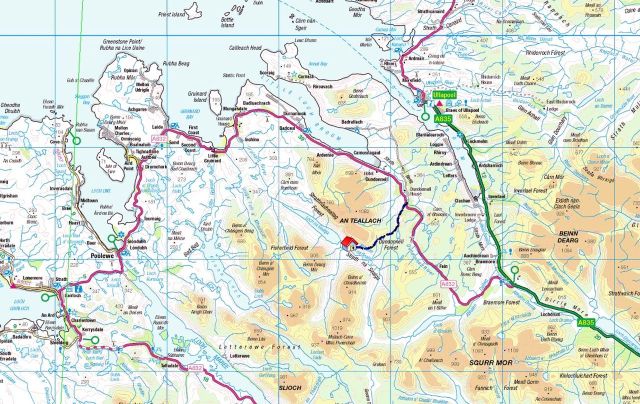 Wester Ross with the route to Shenavall Bothy

The land between Gairloch, Dundonnell, Gruinard Bay and Kinlochewe is often referred to as ‘The Great Wilderness’ and no wonder.   The A832 road skirts most of the area, but that’s the only road you will see – the interior has a network of ancient tracks left by stalkers, drovers and more recently hikers and mountaineers, but if you had to pick one word to sum it all up, it would be ‘remote’. 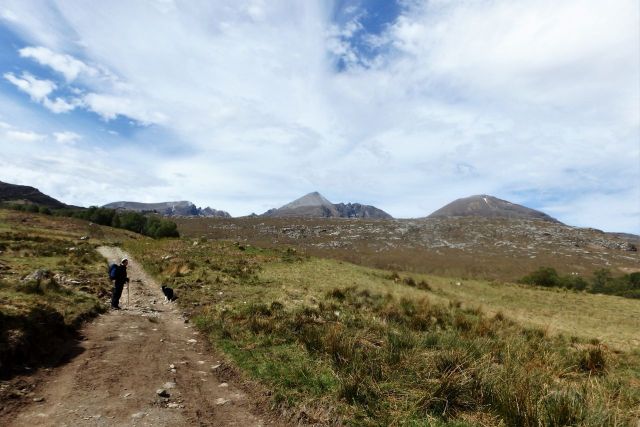 Walking through the woodlands of Gleann Chaorachain

Better view of An Teallach now, looking to the northwest

Chris and I (plus Border Collie ‘Mist’ of course) had decided on a bit of a wander into one small corner of The Great Wilderness.   The name doesn’t convey the magnificence of the mountain scenery though, with the peaks of Slioch and the Fisherfield Forest being highlights, but the star of the show (well, for me anyway) was An Teallach.   We set off from Coire Hallie near Dundonnell, following the Landrover track to Strath na Sealga, leaving the track at its high point to follow the rough path over the moor. 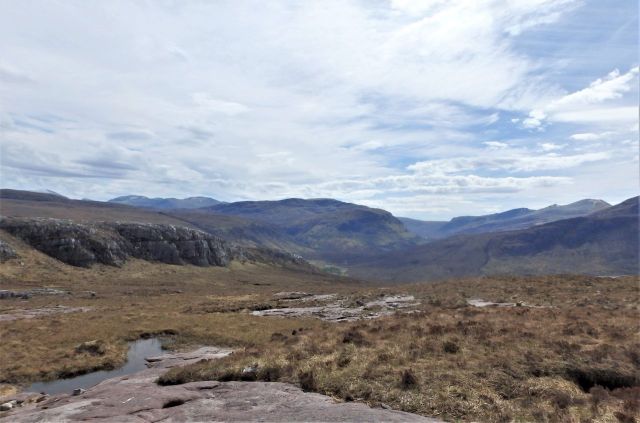 Movement spotted on the moor next to the path ….

…. which turned out to be two riders with pack horses

Better view into the head of Strath na Sealga, with a green oasis central in the image

The path was easy to navigate, though a bit rough and boggy in places.   By now we had traded the view of the magnificent An Teallach for a less interesting bit of moorland, with a distant view of the head of the valley of Strath na Sealga.   Then I detected movement across the moor – it was two riders, each leading a packhorse.   For a moment we could have been transported back a couple of centuries when travel by horse would have been the best option.

Border Collie ‘Mist’ and the view towards the Fisherfield Mountains

Start of the descent down to Shenavall 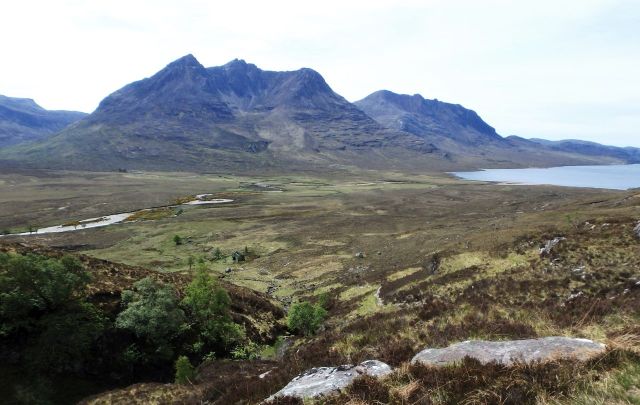 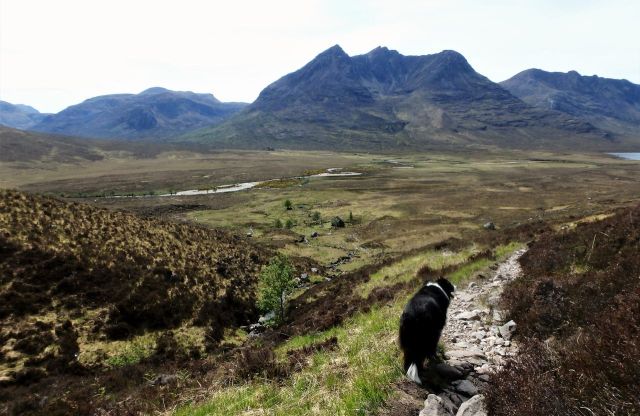 The final part of the descent, Shenavall just low of centre

Chris, happy to get to level ground 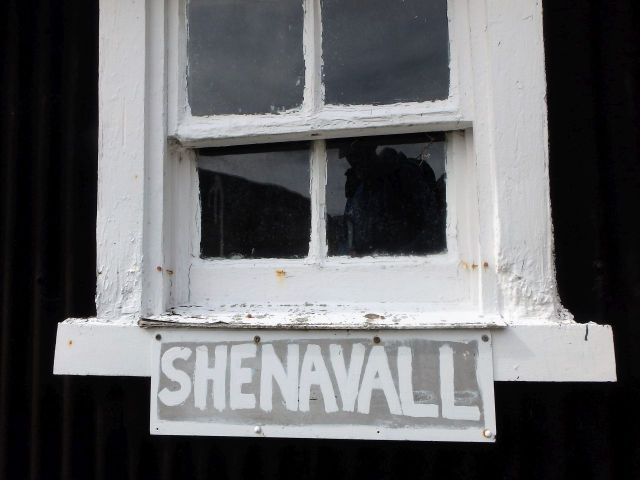 After a good bit of walking, our path started to descend to Strath na Sealga, gradually at first before becoming steeper on the final section.    I was amazed to find hoof prints and fresh horse dung – our riders had obviously taken this route out from Shenavall, pretty heroic stuff in my book.   Chris was less impressed by the steepness of the descent but persevered, and we eventually arrived at Shenavall Bothy, in one of the most impressive locations you could wish for.

The main room with fireplace 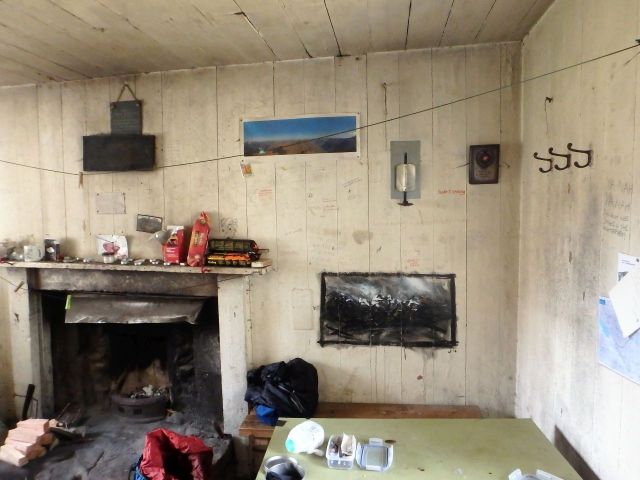 Another view of the main room …. 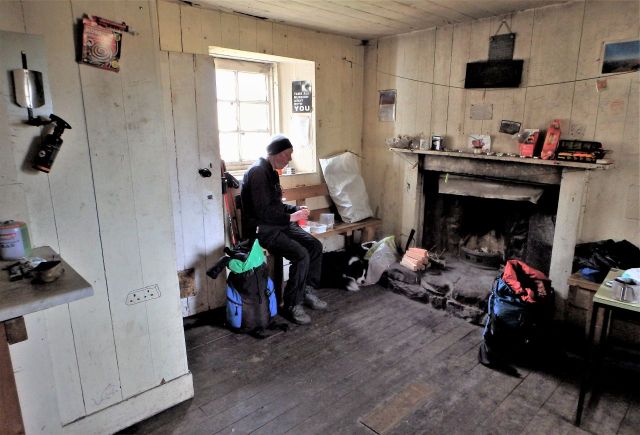 …. with a new (temporary) resident

Shenavall was once a home to the MacDonald family, who occupied the house from 1891, with Mr MacDonald employed as a stalker.   They had four cows and access to fresh salmon and venison from the estate, augmented by paraffin, meal, sugar and tea conveyed by pony from Dundonnell.   A roll of tweed would have been bought from Ullapool every year, with which a travelling tailor would make suits, trousers, skirts and jackets for the whole family.   It must have been a hard life, but by the standards of the time, they were comfortably off.

Chris checking out the kitchen

Time for a well-earned brew!

Shenavall is still owned by the Dundonnell estate but is in the care of the Mountain Bothies Association, who maintain the bothy for ‘free of charge’ use by hikers, climbers and mountaineers.   Unfortunately, we were not staying overnight, but with a fire going the place would have been a cosy stopover.   After taking a look round it was time for lunch and well-earned brew, with extra dog biscuits for ‘Mist’.

…. with an interesting weather front forming over An Teallach …. 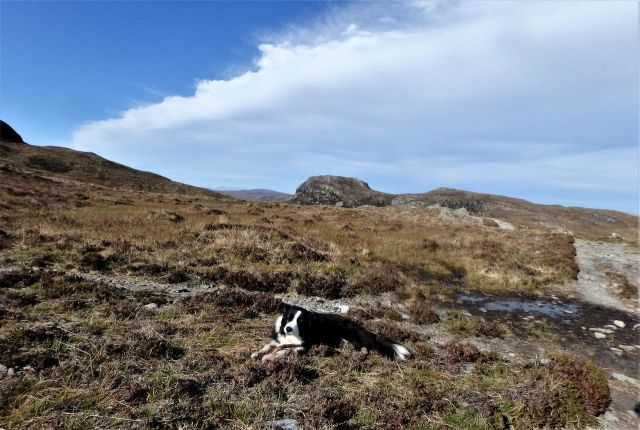 …. but ‘Mist’ isn’t impressed as it’s getting near to dinner time!

Then it was time to head back over the moor.    The views opened up as we left the confines of the stream flowing down to the bothy, with An Teallach taking centre stage again.   We had an extra treat with an interesting looking weather front moving through, but there was still some way to go before we finally reached the campervan on the A832.   Moving further up the road for an overnight spot proved to be a great idea – as well as meeting up with our mates Richie and Babs again, we were also treated to yet another spectacular sunset.    Days (and nights) in the Scottish Highlands don’t get much better than this! 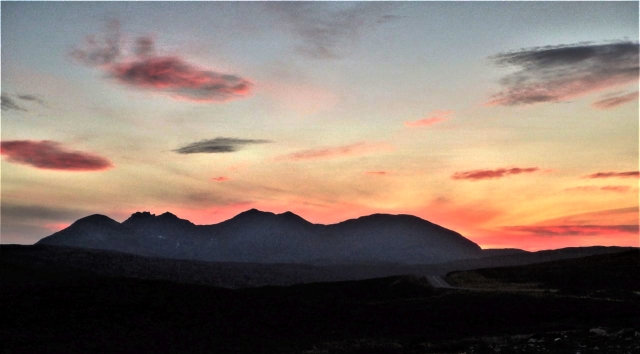 Yet another fine sunset – looking towards An Teallach

Text and images © Paul Shorrock except where stated.

I've been mucking about in the mountains for longer than I care to mention. I started out by walking my local hills, then went on to rock climbing, mountaineering and skiing. Still doing it, and still getting a buzz. I'm now sharing the fun, through my guided walking business (Hillcraft Guided Walking) and by writing routes for other publishers, mainly Walking World and Discovery Walking Guides. Just to make sure I keep really busy, I am also currently a member of my local mountain rescue team.
View all posts by Paul Shorrock →
This entry was posted in 1. Scotland, Bothy days and tagged Border Collie, bothy, hiking, hillwalking, mountains, photography, Scottish Highlands. Bookmark the permalink.