Marion Ffrith on the Offa’s Dyke Path, with the sea in the distance

(For the best viewing experience, left click the images and maps to zoom in, then use your browser return arrow to go back to the text)

It’s almost three months now since we were locked down in the Covid-19 emergency.  Although, at the time of writing it’s now possible to drive anywhere to take exercise in England, over in Wales we are still restricted to taking exercise within five miles of home.  We’re lucky in our part of Wales that we are surrounded by paths, hills and valleys, but after a while it gets a bit repetitive.   Fortunately, there’s an extra attraction just 400 metres from where I live – the Offa’s Dyke Path.

The first National Trail to be established in the UK was the well-known Pennine Way, opened in 1965 and following the chain of hills running up the centre of Northern England.  The 177-mile (285 km) Offa’s Dyke Path came soon after in 1971, roughly following the line of the Welsh-English border and the 1200-year-old Offa’s Dyke.  It is disputed whether or not King Offa of Mercia was responsible for the whole length of earthworks that make up the Dyke, but it marks the establishment of a frontier between the two countries. 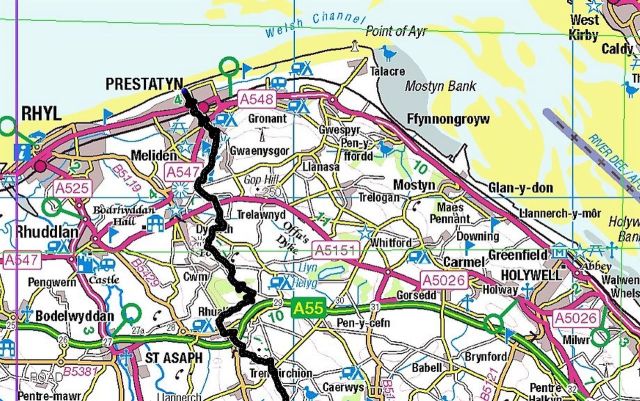 The northern and final section of the ODP, from the A55 Expressway to Prestatyn

The ancient Dyke can still be traced in places, but the path bearing the name is much more visible.    Over the past eight years, I’ve walked most of the trail from Llangollen to the sea, with the exception of a couple of less interesting lowland sections.   Best of all, the northern bit from the A55 to Prestatyn is easy to get to from home, so whilst locked down, ‘me and the missus’ (plus Border Collie ‘Mist’) took the chance to revisit this section as two separate walks.

The plan was to walk out to Mynydd y Cwm (Cwm Mountain) to pick up the trail (the link route is shown as blue arrows on the map above).    From there, we would follow the ODP until within striking range of home at Dyserth.   A few days later, it would be back to re-join the ODP near home to walk to Prestatyn, before following a link path back to Dyserth (red arrows on the map)

OK – by now, regular readers will know that in Wales, anything just a little higher than the surrounding countryside will probably be given the title ‘Mountain’.   Even lowly Graig Fawr at 153 metres high (see later in this post) is honoured locally with the name ‘Meliden Mountain’, so Mynydd y Cwm or ‘Cwm Mountain’ deserves the title at 305 metres.    We set out to the hamlet of Cwm following the contours of our own mountain (Moel Hiraddug, 265 metres – see post #73) heading for the wooded summit above the houses.

In the woods on Cwm Mountain

Most of Cwm Mountain is commercial forestry, not my favourite when it comes to hiking, but there are some points of interest here.    The summit has a memorial to the crew of a Halifax aircraft that crashed into the hill on 5th December 1947 – unlike many of the aircraft accidents in North Wales, this crash occurred in peacetime, after WW2, though the crew of four had all served in the RAF in the war, and the aircraft had been converted from a heavy bomber to civilian use. 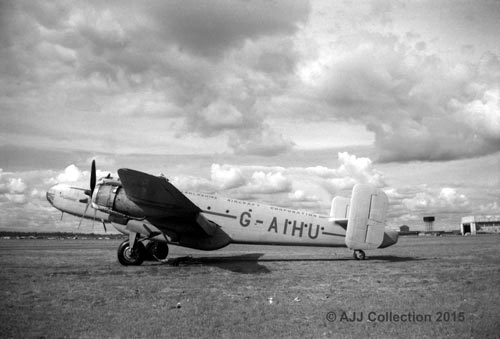 The Halifax was carrying a cargo of 96 bales of fabric with a total weight of 6380 kg (14036 lbs) from Lille in France to Speke near Liverpool.   The aircraft passed over the Wirral Peninsula, heading away from Speke, then flew west along the Welsh coast before turning inland near Rhyl to complete a circuit that would line up with Speke – the wind was from the East, so the aircraft needed this approach to land into wind.

The aircrash site memorial at the summit

The weather was poor at the time, with rain and low visibility.   The aircraft was also observed to be flying very low by witnesses at Rhyl and St Asaph, but as often happens, bad luck was to play a part.   Although flying too low to be completely safe, the Halifax might have continued to Speke had Cwm Mountain not been in the way – as it was, the aircraft struck a group of trees at the summit, but beyond this location there was no more high ground ahead on the route to Liverpool.

The plaque on the memorial

Sadly, this wasn’t the first aircrash in the area – on 29th December 1943, a B17 Flying Fortress of the USAAF was ferrying personnel from their Base in Suffolk to Woodvale, north Of Liverpool.  The aircraft had passed over Whitchurch and was heading for Rhyl, to turn east along the coast to approach Liverpool – the reverse of the track followed by the Halifax in 1947.

It’s thought that the crew believed they had safely crossed the coast, but instead the aircraft struck a low bwlch (pass) between Mynydd y Cwm and the tiny hill of Marian Ffrith, at a height of about 210 metres, less than 1 km from the Halifax crash site and virtually on the line of the present-day Offa’s Dyke Path.   All 18 crew and passengers in the B17 were killed in the crash.   In this case, it seems that the crash was almost inevitable – looking at the track followed, it’s quite likely that the aircraft would have hit Marion Ffrith or Moel Hiraddug, had it survived the crossing of the bwlch. 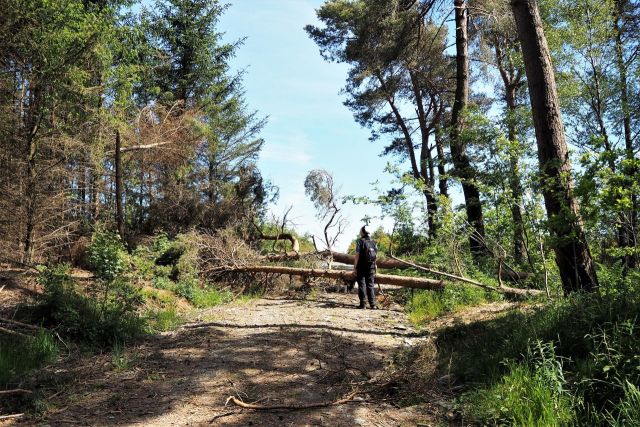 …. with more to come

At last! The junction with the Offa’s Dyke Path

As well as visiting the memorial, I had another task planned.   The mountain rescue team I’m a member of (NEWSAR) covers this area, and because we rarely have incidents in this part of the country, there’s a lack of local knowledge in the Team about access points and evacuation routes from Cwm Mountain, so over a couple of trips I’ve plotted places where the track is blocked to vehicles, in case we are called there in the future.   Having logged where the blocked tracks were, it was time to go and find Offa and his Dyke.

There are several ‘Marians’ around here – two farmsteads called Marian Mawr and Marian Bach (Big and Small respectively), plus the hamlet of Marian Cwm (Marian Valley).  These are all grouped around Marian Ffrith which means, simply, Marian Pasture.    It’s a rocky little hill in places, with small limestone outcrops, but with sufficient grazing for the local sheep.

Looking back to Mynydd y Cwm…. 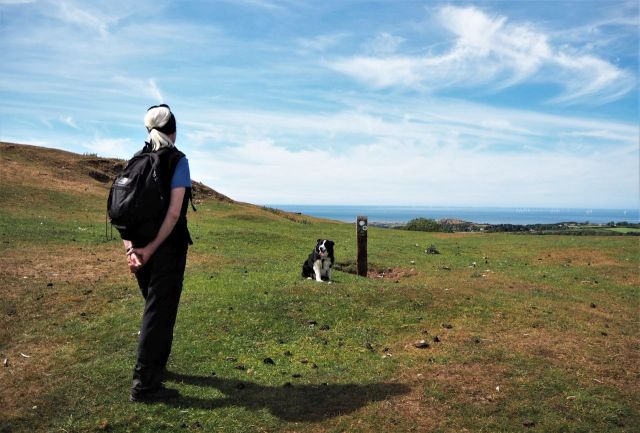 …. and looking forwards with the sea ahead

Looking west to the mountains of Snowdonia, only 25 miles (40 kms) away

Our ‘home mountain’, Moel Hiraddug, marking the end of this section

This isn’t high adventure by any standards  – the walking is through farmland, though it does have an upland feel to it.   The best of it though, is that the views start to open out after the claustrophobic feel of the forest, and I would imagine that if you had just walked all the way from Chepstow, the early sightings of the sea marking the end of the trek would be a real morale booster.    For me, the best view was of Snowdonia, a mere 25 miles (40 kms) away, but nearer to hand was Moel Hiraddug, rising just above our home, and the days finishing point. 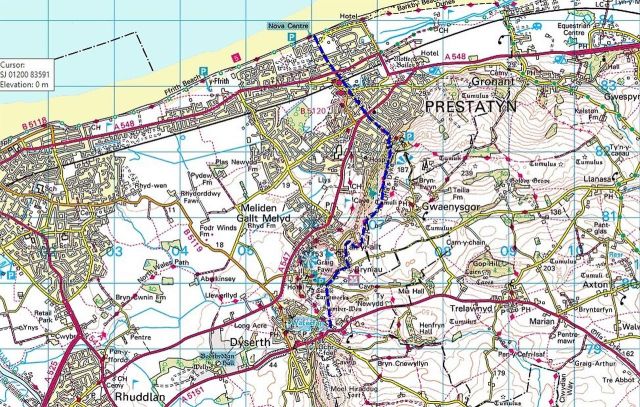 The ODP from near Dyserth to Prestatyn 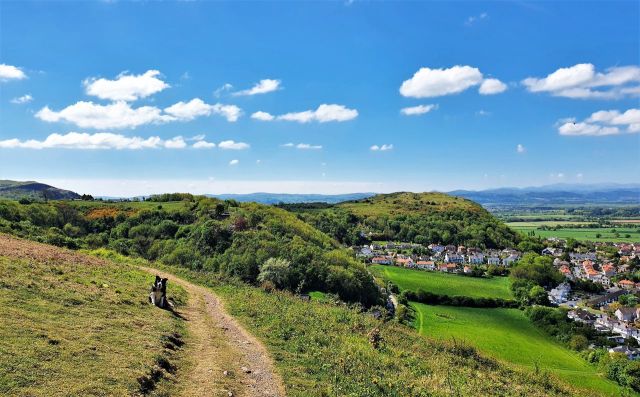 On the ODP looking back to Graig Fawr on the right, above the houses

Higher up on the Prestatyn Hillside section

The second part of the trip, a couple of days later, was from Dyserth to Prestatyn.   We often include the small outlying hill of Graig Fawr when we are heading this way, as it gives a great all-round panorama, including the final ‘Prestatyn Hillside’ section of the ODP (shown by yellow arrows on the photo above). 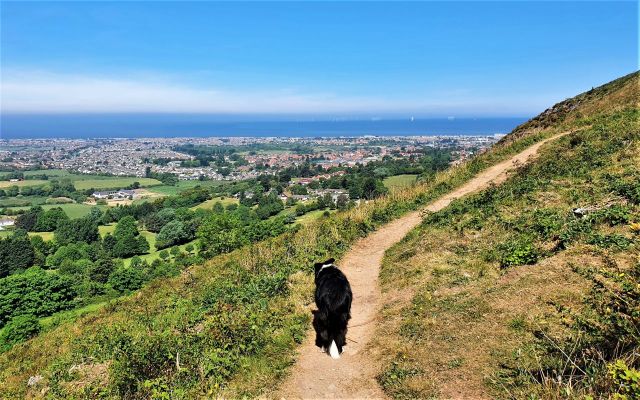 This section has more of a hilly feel, though our highest altitude was to be a mere 200 metres, but the ‘up and down’ nature of the path, with views back to Meliden and forward to Prestatyn, brings an airy feel to the route.

Off the hillside and onto the road

Nearly at the sea, and the end of the ODP (or the beginning if you’re going the other way!)

Then all too soon, the path becomes road for the last section into Prestatyn.    Most hikers completing the ODP come from the quiet switchback path of Prestatyn Hillside to the more bustling Prestatyn High Street, but as a result of the Covid-19 lockdown, the shops were all closed and the only people walking were the ones out for their (permitted) daily exercise.  The bonus for us was that it didn’t take long to clear the town centre. 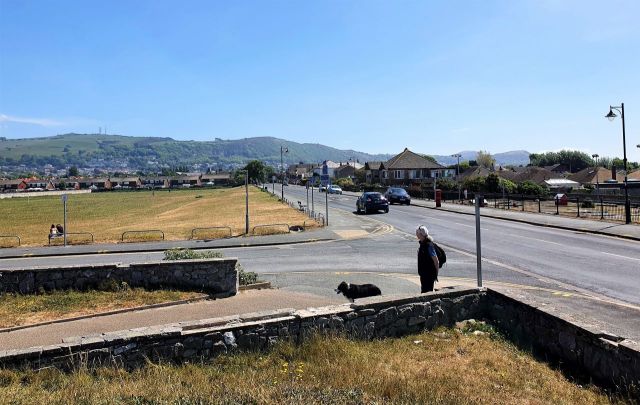 Looking back to Prestatyn Hillside on the skyline

The final 500 metres to the sea must be a welcome sight for those who have completed the whole trail.    We took a final look at Prestatyn Hillside before our arrival at the Dechrau a Dewidd sculpture – this represents the sun, and for those who have just arrived from Chepstow, the ‘sun’ is in the West marking the end of their journey.    Not for us though, it was time to head for our return link route to Dyserth, and for ‘Mist’ the ever-welcome dinner time! 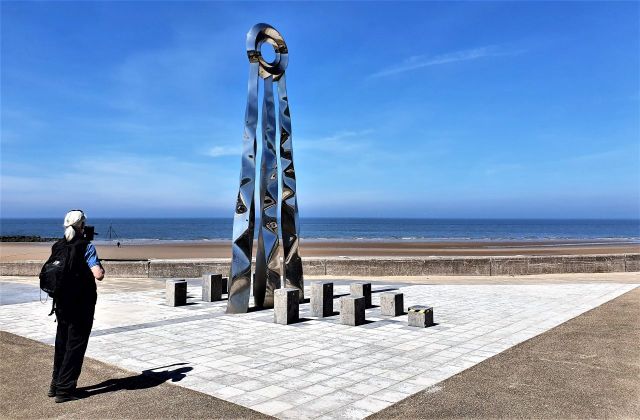 Text and images © Paul Shorrock except where indicated as otherwise.

I've been mucking about in the mountains for longer than I care to mention. I started out by walking my local hills, then went on to rock climbing, mountaineering and skiing. Still doing it, and still getting a buzz. I'm now sharing the fun, through my guided walking business (Hillcraft Guided Walking) and by writing routes for other publishers, mainly Walking World and Discovery Walking Guides. Just to make sure I keep really busy, I am also currently a member of my local mountain rescue team.
View all posts by Paul Shorrock →
This entry was posted in 5. North Wales, Aircrash Sites and tagged Border Collie, Clwydian Hills, hiking, hillwalking, mountains, Offa's Dyke Path, photography. Bookmark the permalink.