#27 – At last! The real Whernside!! – (Whernside and Ingleborough – two out of the Yorkshire Three Peaks) 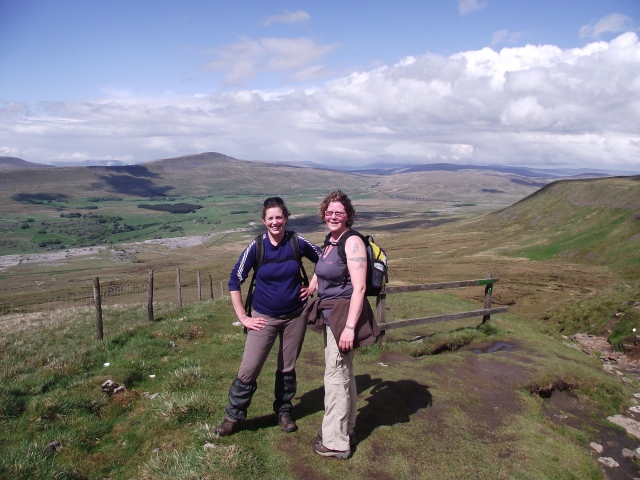 Olivia and Roo on Ingleborough, with Whernside in the distance

The Yorkshire Three Peaks (Y3P) are like old friends.  I’ve known them for years, since I started hill walking, in fact.  Like old friends, sometimes a few years will go by without any contact, then you meet up again and it’s just like old times.  I had re-acquainted myself with the Y3P in 2009, at the same time meeting up with Kim Tyrrell, an old mate from my time in the Royal Marines.  We had a great day out on the Y3P challenge route, and as far as I was concerned that was probably enough Y3P for another decade or so. 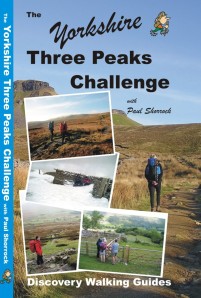 Within a few months I was back on familiar ground, writing a guidebook for the Y3P Challenge walk for Discovery Walking Guides.  Chris and I saw a lot of that part of the Yorkshire Dales over the winter of 2009-10, so much so that at one point she had asked, “Could we go somewhere else for a walk”?  John Bamber, another old mate, had also been involved with the project, helping out with photographs, and the guide was published in July 2010. 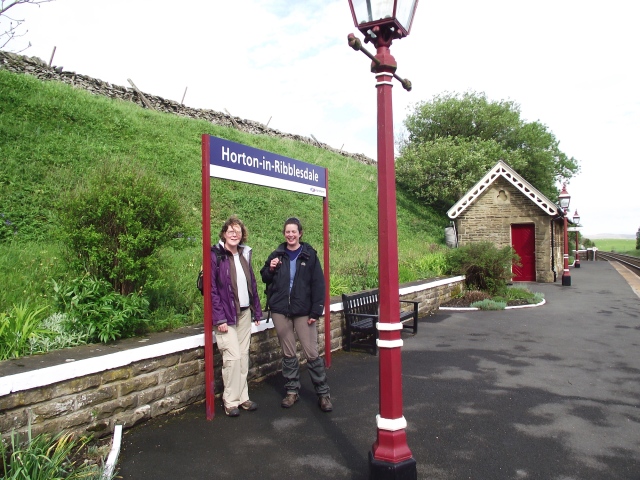 One of my earliest customers for the book was Roo, who we first met with her lovely family halfway up Cadair Idris.  She was planning to do the Y3P challenge in June 2011, and had already done a training walk over Pen y Ghent – I received an email asking would I like to join them for the next training walk over Whernside and Ingleborough.  Well, any excuse for a walk, and despite an ‘iffy’ looking weather forecast, the day dawned fine as I met Roo and Olivia at the railway station at Horton in Ribblesdale.

The intention was to start at Ribblehead and from there to walk the Y3P Challenge route over Whernside followed by Ingleborough, then to finish at Horton.  So, after our short train ride we set off by walking under the iconic Ribblehead Viaduct.  This put us on track for one of the less popular ascent routes on Whernside, the one that the fell runners use.

You can’t run up that!!” – the fell runners’ way up Whernside

The runners’ route is steep, and somewhat brutal and ‘in yer face’, but it takes a straight line almost to the summit, and possibly saves as much as 30 minutes over the prettier route.   The animated and interesting conversation that had continued from Ribblehead died away, but by the time we reached the path on the summit ridge we had gained an extra 30 minutes advantage on the guidebook time, on top of the 30 minutes for going the steep way.  Result!

The path on the summit ridge, heading for the top

The descent to the Hill Inn at Chapel le Dale went well, with our time advantage intact and growing.  A water stop gave time for a short break from walking – it also gave time for the rain to arrive, though it didn’t linger too long, and had started to ease off during the ascent of Ingleborough.  Another steep section loomed ahead, but before long we were on the summit, sharing the views with several others. 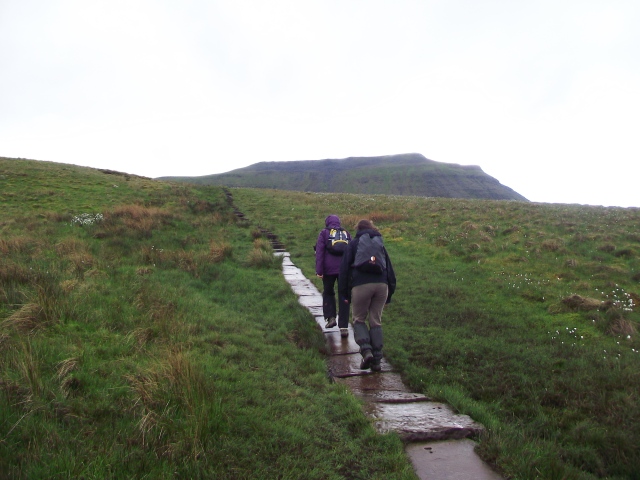 The rain started to ease off during the ascent of Ingleborough

Striding out on the way down to Horton

Having done the usual summit things it was time to head off down to Horton.  The path varies in quality, and goes on a bit, but several sections saw the pace picking up, and more minutes shaved off the predicted time.  There was even time to admire some of the spring flowers on the way down – sections of the Ingleborough area have a managed grazing regime, to prevent sheep cropping everything down to ground level. 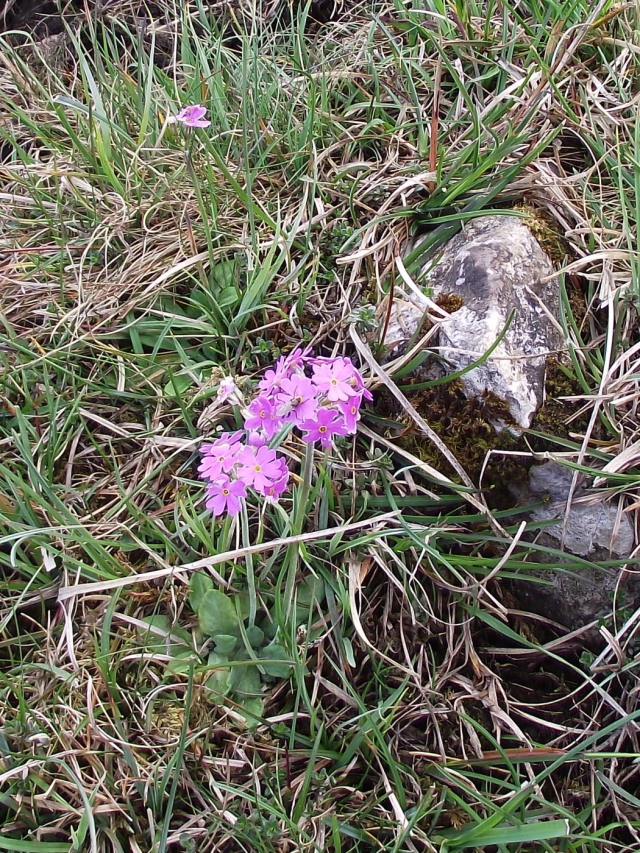 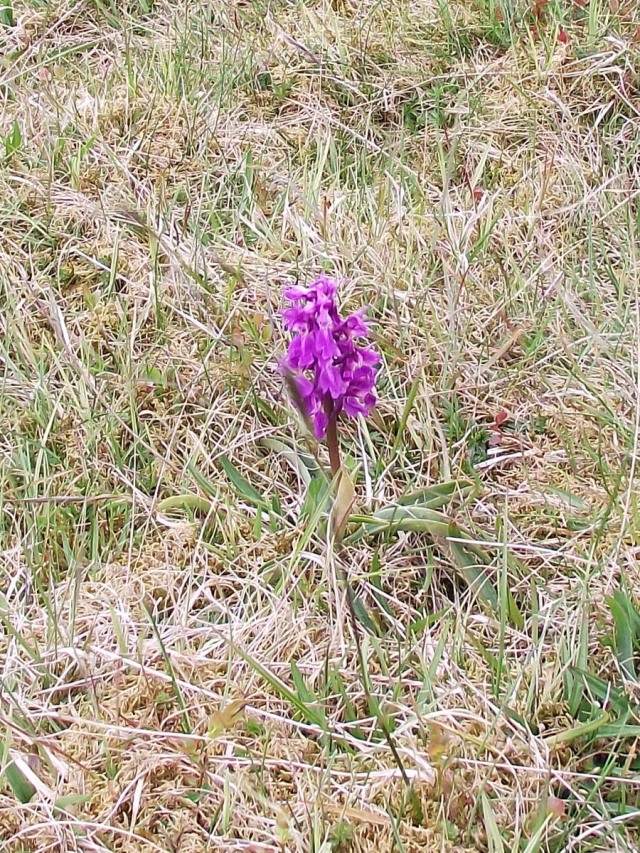 Although the flowers made a welcome addition to the route, the main feature was Pen y Ghent on the horizon – not on today’s itinerary, but it just didn’t seem to get any nearer!  Then, all at once, it was over – A short slope led down to the railway with Horton just beyond.  A good day for all of us, with Roo and Olivia having done two of the three peaks in less than the predicted time – Wish ‘em luck on 18th June when they do all three in less than 12 hours – or even better, click here to sponsor them!

Pen y Ghent in the distance

p.s.  The Y3P guide is still available direct from me for £8 and free postage – click here for more details

p.p.s  When she isn’t tramping the hills, Roo is an artist who paints ordinary things in an extraordinary way.  To see her website click here

I've been mucking about in the mountains for longer than I care to mention. I started out by walking my local hills, then went on to rock climbing, mountaineering and skiing. Still doing it, and still getting a buzz. I'm now sharing the fun, through my guided walking business (Hillcraft Guided Walking) and by writing routes for other publishers, mainly Walking World and Discovery Walking Guides. Just to make sure I keep really busy, I am also currently a member of my local mountain rescue team.
View all posts by Paul Shorrock →
This entry was posted in 3. Yorkshire Dales and tagged hillwalking, Ingleborough, mountains, Three Peaks Challenge, Whernside. Bookmark the permalink.