The A82 road from Tyndrum to Glencoe must rank as one of the most scenic and dramatic drives in Britain.  Amongst all this drama, Buachaille Etive Mor stands head and shoulders above the surrounding hills, a mountain amongst mountains.  It is almost always associated with Glencoe, though to be correct the mountain belongs to Rannoch Moor or Glen Etive – the name means “The Big Herdsman of Etive”.

The northeast side is the real head-turner, with what appears to be an almost impenetrable barrier of steep rock walls and deep gullies.  There are ways through the maze of rock, but most of these ways are the preserve of the rock climber.  There is, however, an exciting, elegant and not too difficult route through the defences of the northeast face – Curved Ridge.  The ridge is classed as an easy rock climb or a hard scramble, depending on which guidebook you are reading.  Because of this it sits on the fence somewhat. 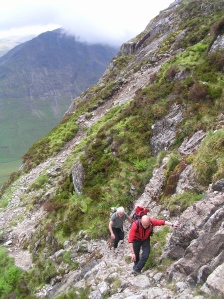 Scrambling up to the start point.

The team for the trip was a couple of old mates, Ian Rogers and Mark Bradley.  Curved Ridge is also another old mate, and I had done the route three times previously.  We had set out early to drive to Glencoe from Ian’s place near Carlisle, and on arrival found “The Buachaille” far from inspiring.

The day was grey and dismal, but there are few things in life that can’t be improved by adding a bacon ‘sarnie’. So the plan was, drive on down to Glencoe village, investigate the bacon, and then head on back to the mountain.    The plan was a total success, though we had to endure a swarm of midges that had set up shop right next to the bacon butty van.

When we returned to the mountain, the day had brightened up enough to make it worth while getting our boots on. Leaving the car at Altnafeadh we set off on the path past the white cottage at Lagangarbh, at first heading for Coire na Tulaich, which was to be our descent route.  We then peeled off to traverse under the brooding northeast face before we started heading upwards on the eroded path next to the rock feature known as “The Waterslab”.  Some easy rock scrambling brought us to a slabby rock wall that marks the start of the route.

One way to tackle the slabby wall is by the thin  groove on the right.  However, there’s a neat way to by-pass that to save time, which is exactly what we did, passing the remains of a dead deer on the way.

After that the route wanders back and forth, with no route finding problems – on a ridge like this you just carry on up! After a while the route becomes a little steeper, and a rope becomes a sensible insurance policy.  There are only a couple of short rock pitches, but a fall from one of them would be terminal.  As it was a wet day, and I had a heavier than usual rucksack, it didn’t take long for me to suggest roping up.

Ian at the top of the second rock step

The weather continued to be fickle as we sorted out the rope and continued upwards.  On a warm sunny day this section is simple enough, and the route is considered to be either a Grade 3 (s) scramble or a moderate rock climb – I’ve soloed this section when I was younger, but age makes caution (or perhaps in this case cowardice) an honourable option.

On top of that, the rock was cold and wet, with the visibility constantly changing from clear to misty.  I belayed at the top of the pitch and was rapidly joined by Mark and Ian.   Then, just as the route was gaining interest we arrived at the top of the difficulties.  As the bacon sarnie was just a memory by then, it seemed a good place for a late lunch and a coffee.

A good way to finish Curved Ridge is to continue over to Crowberry Tower and to climb that, but ‘iffy’ visibility made the gully behind the tower an easier route finding option.  From there a bit more easy rock scrambling took us to the summit, and a rapidly clearing sky – typical!  From the summit the route to the top of Coire na Tulaich was easy enough to find.

Coire na Tulaich is the easiest way off “The Buachaille”, leading straight back to the start point at Altnafeadh.  It’s a place to exercise care though, as it’s steep and eroded in places.  In winter it requires much more caution and judgement – there have been several avalanche accidents here in recent years, some of them fatal.  No snow today though, and it didn’t seem all that long before we were back in the car heading back to Carlisle.

The top of the descent route down Coire na Tulaich

I've been mucking about in the mountains for longer than I care to mention. I started out by walking my local hills, then went on to rock climbing, mountaineering and skiing. Still doing it, and still getting a buzz. I'm now sharing the fun, through my guided walking business (Hillcraft Guided Walking) and by writing routes for other publishers, mainly Walking World and Discovery Walking Guides. Just to make sure I keep really busy, I am also currently a member of my local mountain rescue team.
View all posts by Paul Shorrock →
This entry was posted in 1. Scotland and tagged Buachaille Etive Mor, climbing, Glencoe, hillwalking, mountaineering, mountains, scrambling. Bookmark the permalink.