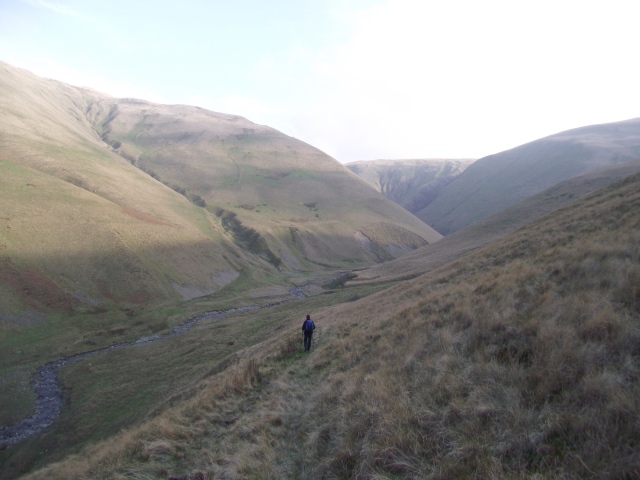 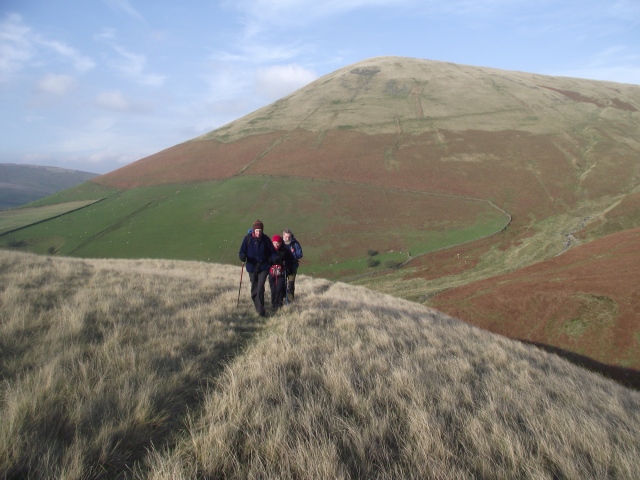 Setting out above Carlin Gill, with Blease Fell behind 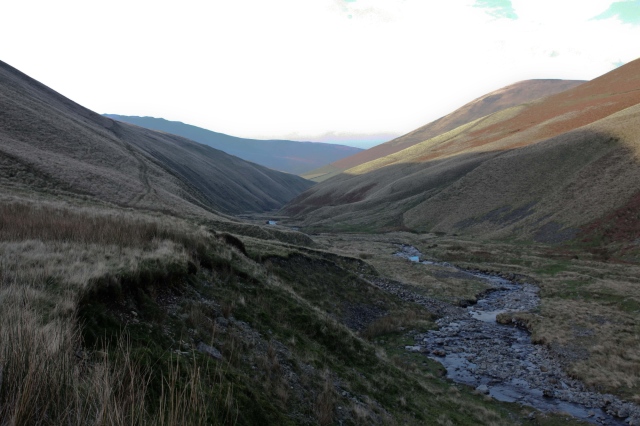 Looking back down Carlin Gill, from the junction with Small Gill (JB)

It had been the monthly music session at John and Miv’s local pub, so Chris and I (and t’dog) invited ourselves over for the night, to be followed the next day by a walk somewhere nearby.  Carlin Gill in the Howgills seemed to tick most of the boxes, so after a late start the assembled team set out up the quiet, deserted valley.  The M6 Motorway is a mere kilometre away, but the thousands driving along are oblivious of this quiet place.  The landscape is typical Howgills, with steep valley sides, and as the valley changed direction things began to get more interesting. 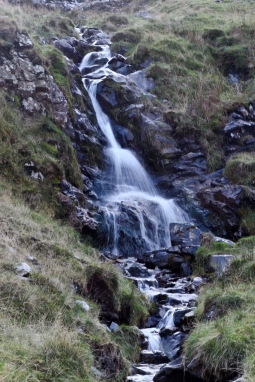 The waterfall in Small Gill (JB) 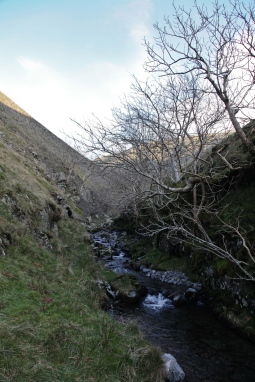 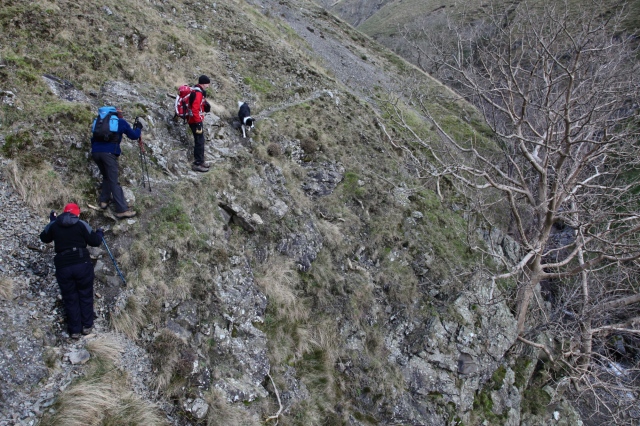 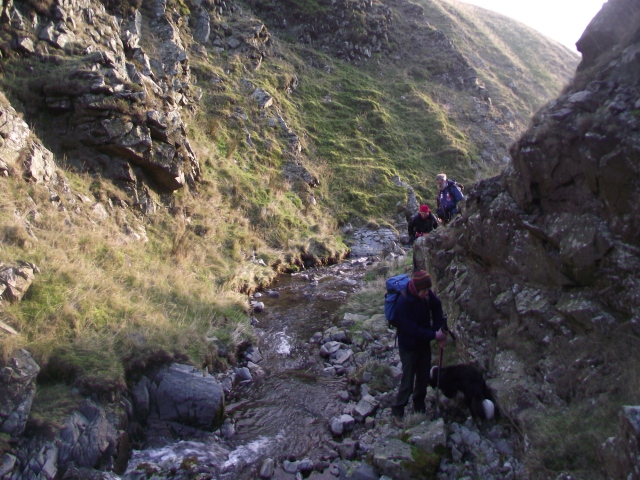 The stream is confined by the steep valley sides 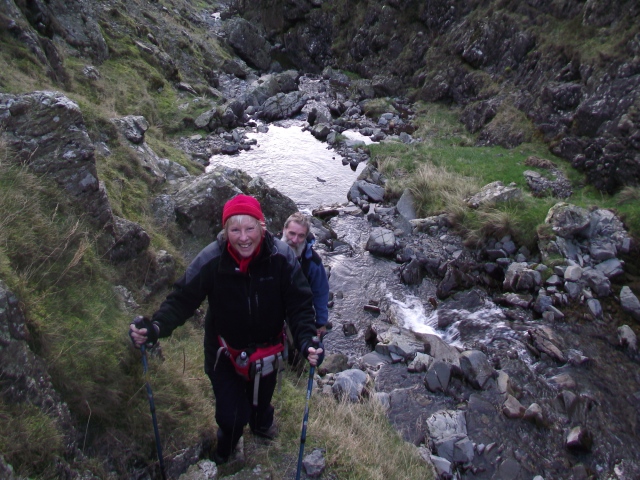 ….as is the path, which twists and turns as it gains height

Carlin Gill suddenly narrows and turns beyond the junction with Small Gill, and the easiest way forward is a narrow path clinging to the hillside above the stream.  Beyond there the path rejoins the stream, but not with the wide valley as before.  Instead, the stream is confined by the steep valley sides, as is the path which twists and turns as it steadily gains height.  Then, suddenly and unexpectedly, an impressive cleft opens up on the right – Black Force. 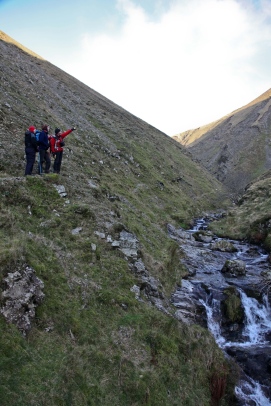 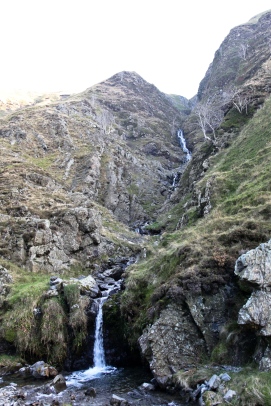 Black Force and its waterfalls (JB) 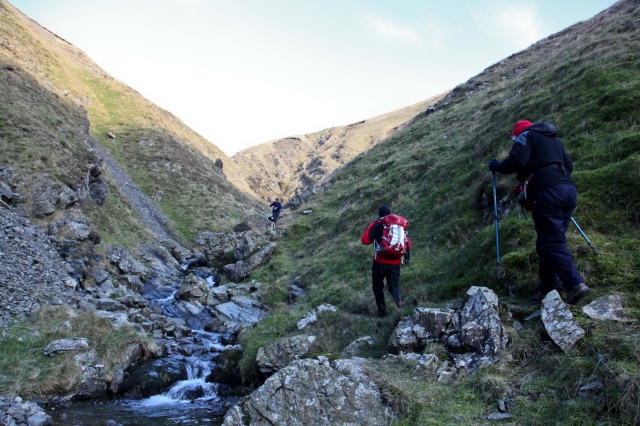 Despite having a forbidding appearance, Black Force is a mere Grade 1 scramble, where the main difficulties can be avoided.  It is also known to give a decent ice route when really cold, and both John and I were making mental notes for the coming winter.  Black Force wasn’t on the menu today, however, so we pressed on up the valley to where, once again, it narrowed before coming to an un-climbable obstacle – The Spout. 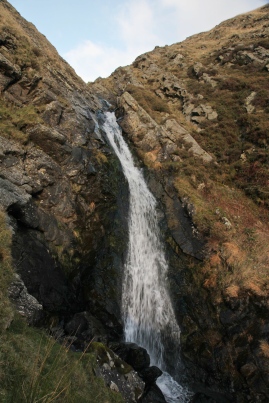 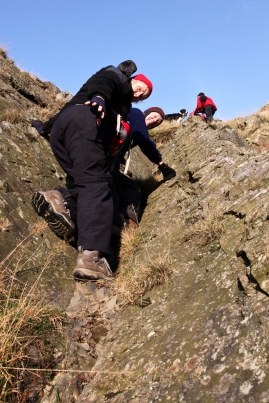 The slab bypassing The Spout (JB) 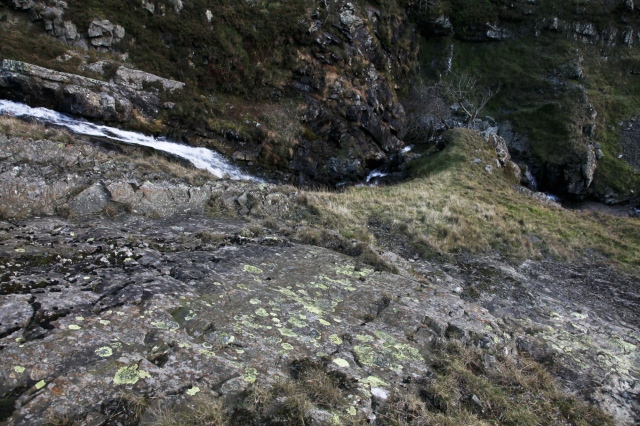 Looking down to the grass rib above the slab (JB)

Un-climbable obstacles usually have a way round them, as was the case here – a short rock slab gives access to a steep grass rib with a well worn line taken by others.  Miv and Chris accepted some moral (and practical) support getting up this bit, and even Border Collie ‘Mist’ seemed glad to have a push up the backside on the steep bit.  Meanwhile, John and I debated yet again the ice climbing potential in a freeze. 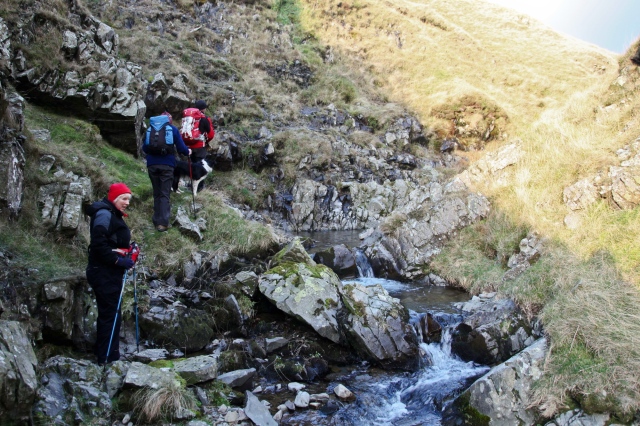 The last twists and turns of the stream (JB) 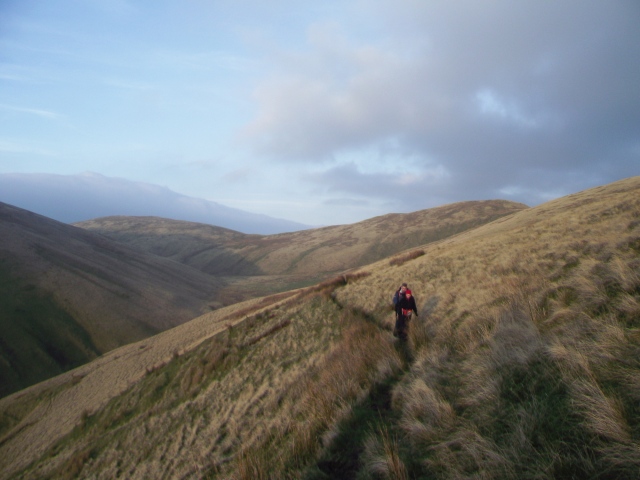 Out on the open fellside 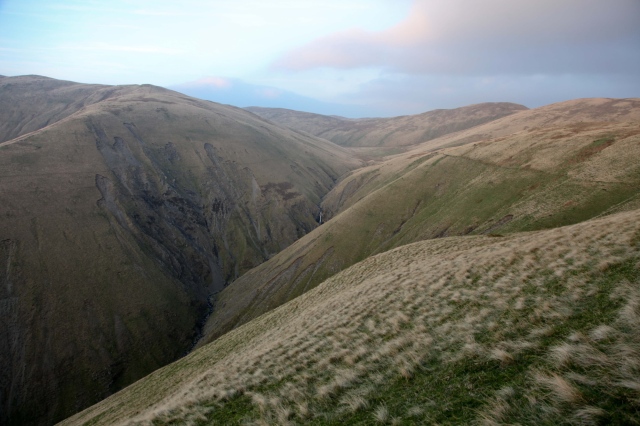 Looking back to The Spout, just visible in the centre (JB)

Beyond The Spout the stream puts in a few more twists and turns before the valley opens out.  Our late start suggested a direct(ish) return, so we took the path above Force Brow heading for the top of Black Force.  From here a good path sweeps along like a terrace, before finally starting to lose height above Fairmile Beck.  The descent of the broad grassy slope between Blind Gill and Fairmile Beck wasn’t made any easier by the failing light, and we used headtorches for the last section down to the road. 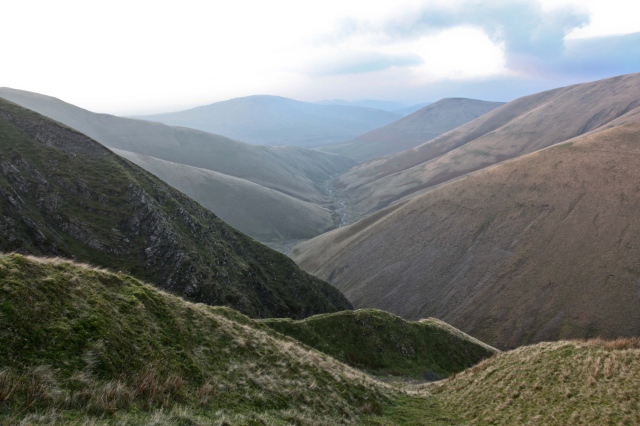 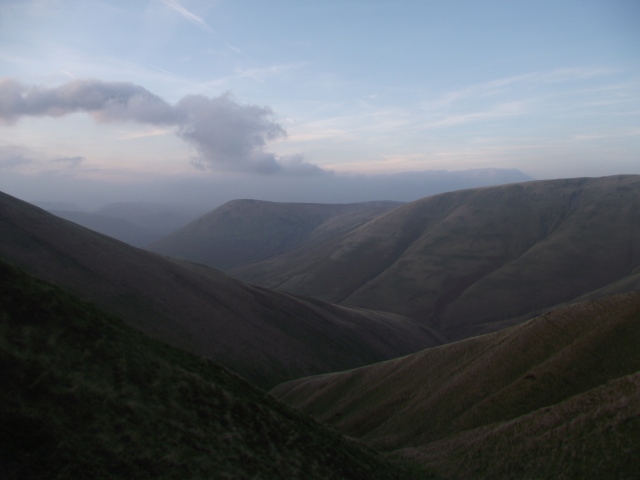 The evening starts to draw in 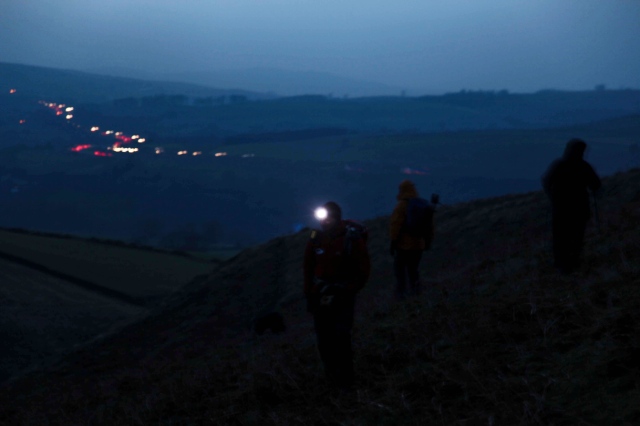 Headtorches in use for the last bit, with the M6 motorway beyond (JB)

Our late start resulted in a late finish, which suited me as I love a night finish to a walk – Miv and Chris seemed less impressed (and let me know about it!) but ‘Mist’ carried on with the business of herding the humans off the hill, while John had a great time trying ‘arty’ photographs of cars on the nearby M6, their lights painting streaks of white and red in the images. 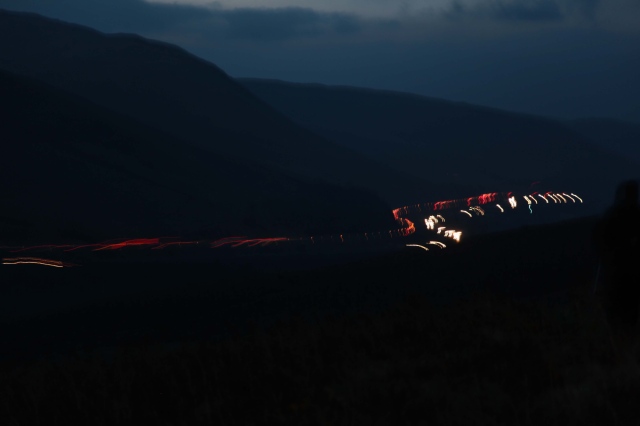 Half an hour later, we were amongst those car lights – unfortunately they weren’t moving fast enough to produce the light effects.  In fact, they weren’t moving at all – a ten-car accident left us sitting it out for an hour until the road was cleared.  Still it gave us time to reflect on a great day out. 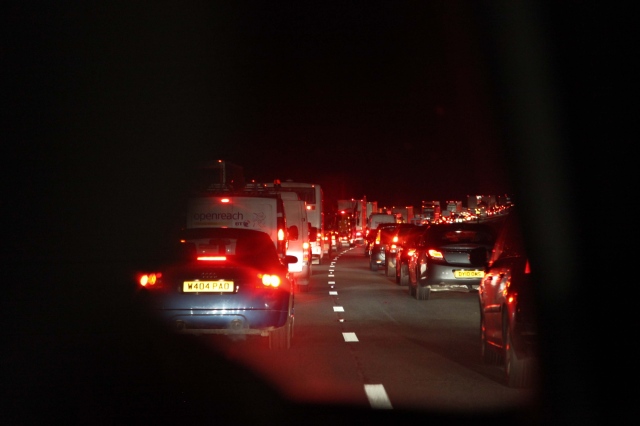 On the way home – stuck in traffic! (JB)

p.s.  Non-UK readers may not recognise some of the words used to describe hill features – they are words in current usage in the North of England, and are derived from old Norse words, brought in by Viking settlers over 1000 years ago.  So, a gill (gjel) is a ravine, a force or foss (fors) is a waterfall, a fell (fjall) is a hill or mountain and a beck (bekkr) is a stream.

p.p.s. The blog is now exactly one year old, and at the time of posting is due to pass the ‘4000 hits’ mark!  Thanks to all of you for dropping in and reading, and please keep on doing so, otherwise it gets very lonely here.  As usual, if you have enjoyed reading please share on Facebook, Tweet on Twitter or subscribe for email updates – posted every week, first thing Monday morning.

I've been mucking about in the mountains for longer than I care to mention. I started out by walking my local hills, then went on to rock climbing, mountaineering and skiing. Still doing it, and still getting a buzz. I'm now sharing the fun, through my guided walking business (Hillcraft Guided Walking) and by writing routes for other publishers, mainly Walking World and Discovery Walking Guides. Just to make sure I keep really busy, I am also currently a member of my local mountain rescue team.
View all posts by Paul Shorrock →
This entry was posted in 4. Northern England and tagged Cumbria, hillwalking, Howgills, photography. Bookmark the permalink.