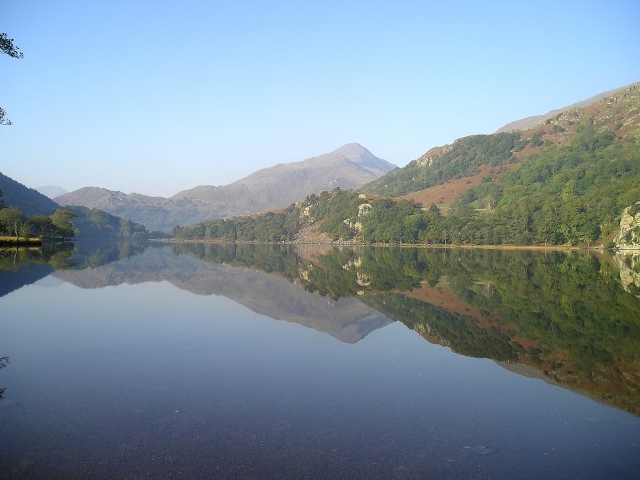 Standing at a height of 747 metres, and surrounded by higher neighbours, Yr Aran is a much neglected little mountain.  Being almost literally in the shadow of the highest UK mountain outside Scotland is not a good career move for a mountain aiming for a place in the popularity stakes, and it’s Yr Wyddfa (Snowdon) that grabs all the attention. 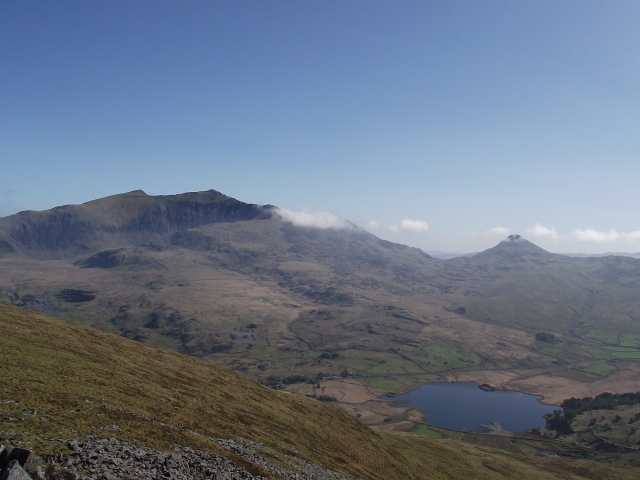 Yr Aran on the right, with Yr Wyddfa (Snowdon) higher on the left

The plus side is that the small summit of Yr Aran is almost always empty, giving grandstand views of many of the more popular mountains of Snowdonia.  Yr Aran is a well kept secret, and even a bit of exposure in this blog isn’t going to change that, which is fine with me!

The start of the Watkin Path from Nantgwynant

View from the Watkin Path towards the waterfalls 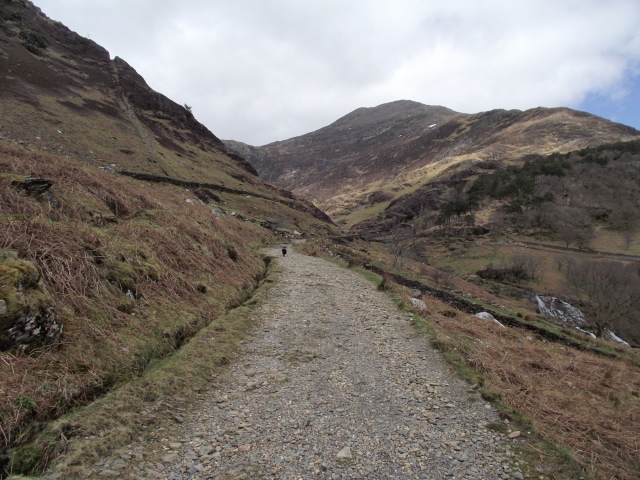 The first view of Yr Wyddfa, seen from the south

The Watkin Path from Nantgwynant is one of the popular routes to the summit of Yr Wyddfa, but it also makes a fine approach route to Yr Aran.  A woodland path opens out into a track with a fine set of waterfalls, and the route has a vague feeling of being in much higher mountains, so much so that it was chosen as a location for the film “Carry on up the Khyber” – even the first view of Yr Wyddfa looks almost Himalayan in Character.

Abandoned mine near to the Watkin Path

Old stone wall near to the abandoned mine

Above the mine and quarry, heading towards the East Ridge of Yr Aran

The broad East Ridge, leading straight to the summit of Yr Aran.

Many of those toiling up towards Yr Wyddfa do not notice the less-frequented path heading up through the remains of long abandoned mines and quarries.  These remains of old industries are soon left behind as the route strikes out for the East Ridge of Yr Aran.  The summit is surprisingly small, but the views are extensive.

The summit of Yr Aran, a superb viewpoint 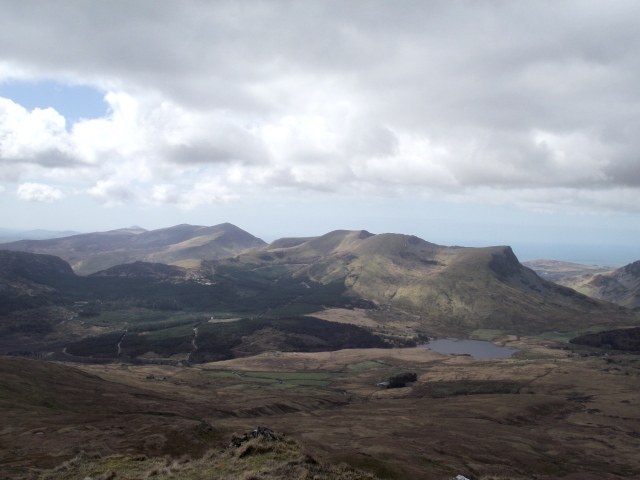 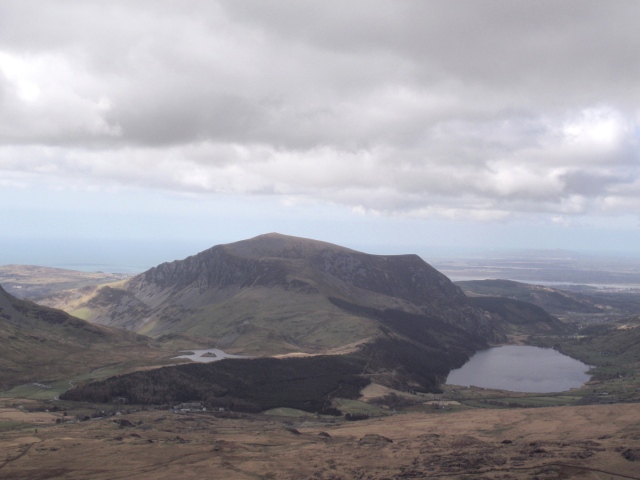 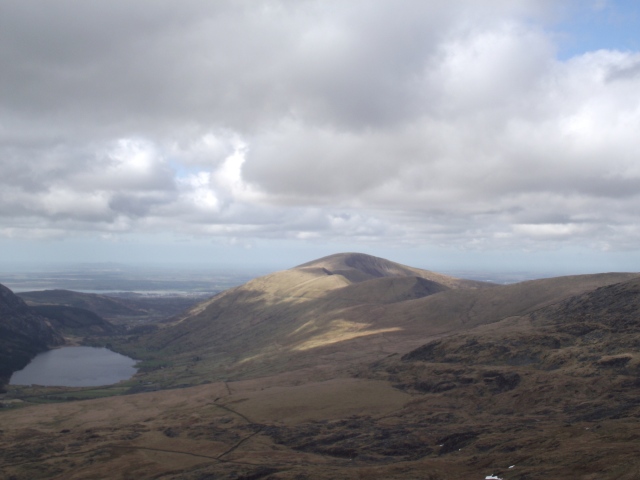 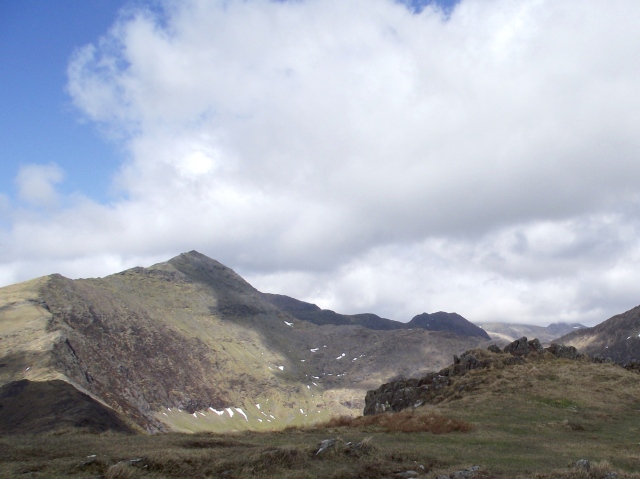 Chris was having a lazy day, so I had dropped her off just below the summit.  My ten minutes to the summit and back hadn’t included time for photos, so I was back a little later than I had estimated.  Light conditions made some of the photos less interesting than they might have been, but they are probably good enough to encourage others to visit the top. 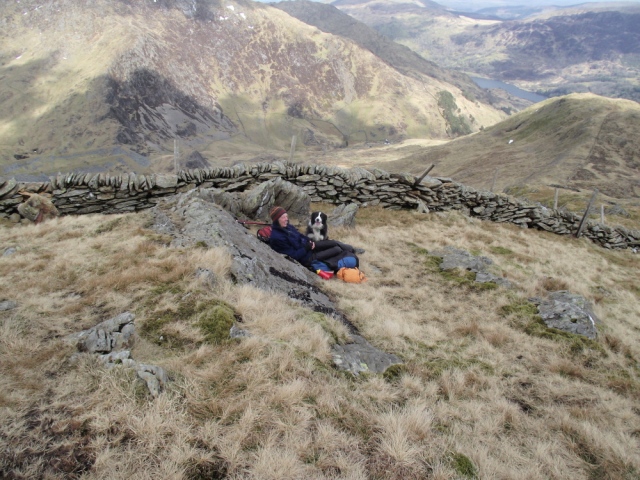 Base camp! Chris guarding the sandwiches

Heading back towards the Watkin Path

The view down Cwm Llan, our descent route 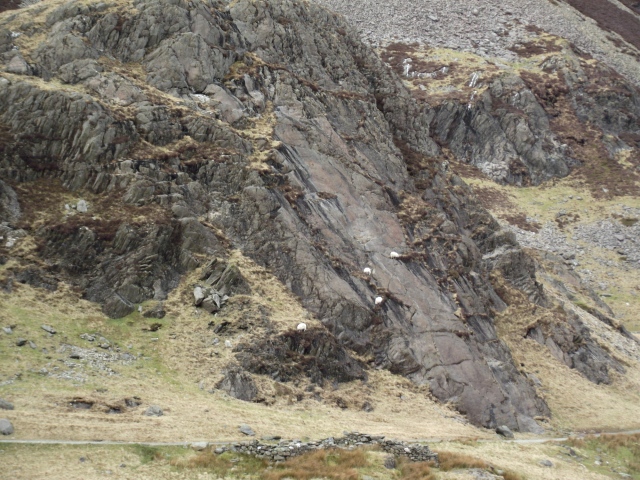 Rock-climbing sheep near the Gladstone Rock

Still in search of a meal!

Our descent route was down the North Ridge, to hit the path in Cwm Llan.  Before re-joining the Watkin Path for the return we saw three ‘death defying’ sheep snatching a meal on the small climbers’ crag near the Gladstone Rock – the grazing must have been good, as a fourth soon joined them for a snack.  We left them to it and didn’t hear any sounds of disaster as we returned down the Khyber Pass lookalike. 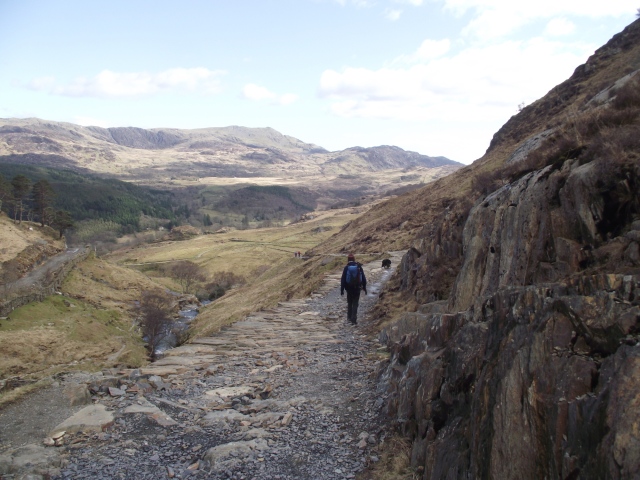 The return down the Khyber Pass lookalike

I've been mucking about in the mountains for longer than I care to mention. I started out by walking my local hills, then went on to rock climbing, mountaineering and skiing. Still doing it, and still getting a buzz. I'm now sharing the fun, through my guided walking business (Hillcraft Guided Walking) and by writing routes for other publishers, mainly Walking World and Discovery Walking Guides. Just to make sure I keep really busy, I am also currently a member of my local mountain rescue team.
View all posts by Paul Shorrock →
This entry was posted in 5. North Wales and tagged hillwalking, mountains, Nantlle Ridge, photography, Snowdonia, Yr Aran, Yr Wyddfa. Bookmark the permalink.