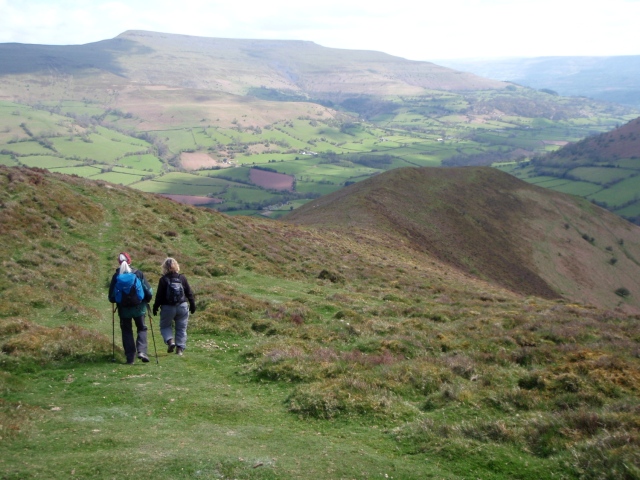 Descending Mynydd Troed to the southeast

Mynydd Troed – Between the Brecon Beacons and the Black Mountains

Living on the edge of the Clwydian Hills in North East Wales, with the glories of Snowdonia just an hours drive away, you might wonder that we bother going to other mountain areas in Wales. The thing is, the country is so hilly that a trip anywhere involves new mountain scenery, so a visit to friends in Mid-Wales usually turns up some new delight. 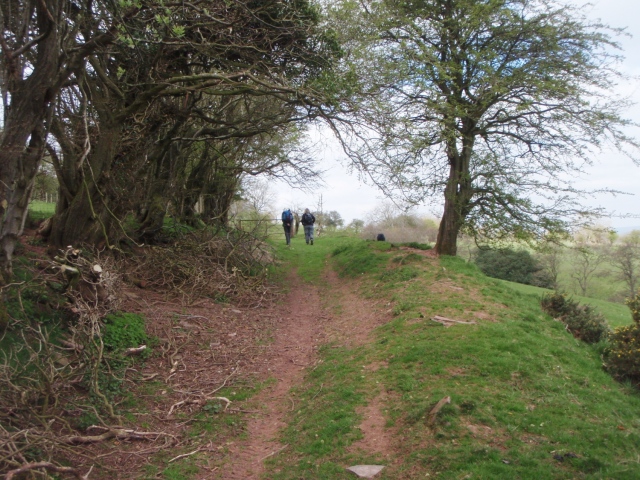 Looking up towards our summit – Mynydd Troed, looking nothing like a foot from this angle

Our friend Barbara usually chucks a map at me and suggests that I pick the route for the day, but on our last trip she already had the hill in mind, Mynydd Troed, which translates as ‘Foot Mountain’ – view it from a distance and the reason for the name becomes obvious. Barbara drives past the hill on a regular basis, and wondered what it was like on top – there was only one way to find out! 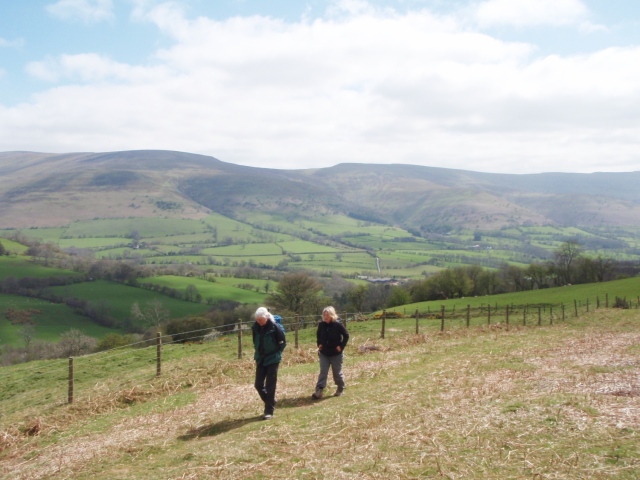 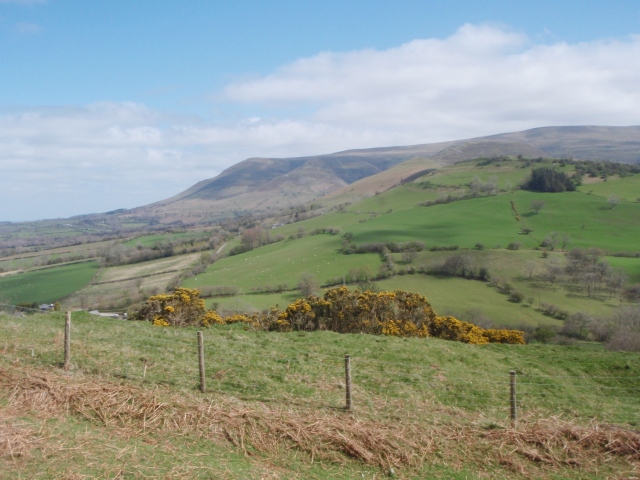 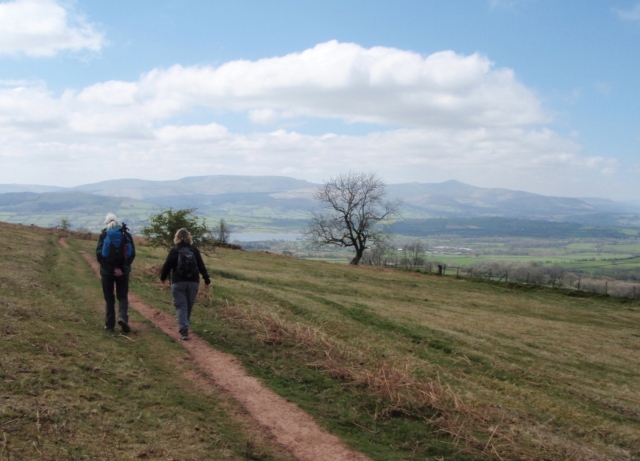 The Brecon Beacons in the distance to the west

Mynydd Troed sits neatly between Y Mynyddoedd Duon (The Black Mountains) to the east, and the Brecon Beacons to the west, and the hill stands alone at a height of 609 metres, which translates as 1998ft.   In the classic guide to the mountains of England and Wales written by John and Anne Nuttall, the definition of a mountain is something higher than 2000ft (610 metres) above sea level – Mynydd Troed fails to make the grade by one metre!

Looking back to Mynydd Llangorse behind 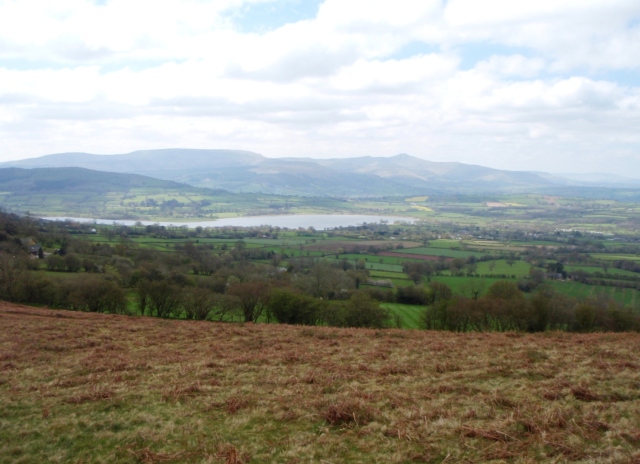 Llangorse Lake with the Brecon Beacons beyond

The valley of Cwm Sorgwm with Pen Allt Mawr beyond

The problem is, nobody seems to have told Mynydd Troed that it isn’t a mountain, so it puts on a good act to convince people otherwise. We started our trip from the Castle Inn near Pengenffordd, where the landlord offers car parking for £1, with the money going to charity. Looking at the map, the most interesting way up the hill seemed to be via the South-West Ridge – as the pub is on the east side of the hill, we started out by walking round Mynydd Troed to the other side.

Impatient Border Collie ‘Mist’ can’t wait to get to the top!

Mynydd Llangorse beckoning, but we are going the other way

Contouring round below the summit 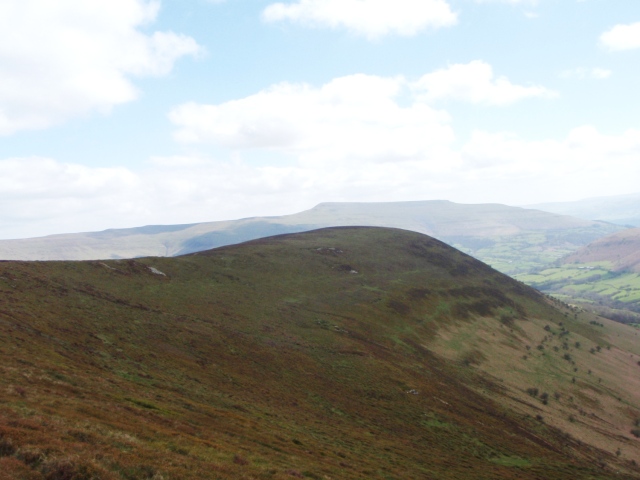 Looking towards the South East Ridge

Just below the summit

‘South West Ridge’ sounds rather grand, with images of rocky precipices – not in this case I’m afraid, though the sudden steepening comes as a contrast to the level walking at the start. As we gained height the view back towards Mynydd Llangorse became more interesting, and I began to wonder if we shouldn’t have gone there instead – serious ‘Nuttall’ fans wouldn’t even have broken step, as Mynydd Llangorse is a mere 508 metres, but from our view point it looked good – another one for the tick list then.

Coffee break at the top ….

Although at a modest height, the summit was ideally placed for great views in every direction, a bit like Yr Aran in Snowdonia (see post #129). After taking in the scenery and having a brew it was time to get down again, via the broad ridge descending to the southeast – I used some crafty zig-zagging to avoid the steepest bits towards the bottom, and when we reached more level ground I thought it was all over.

Things started to get a bit crowded! 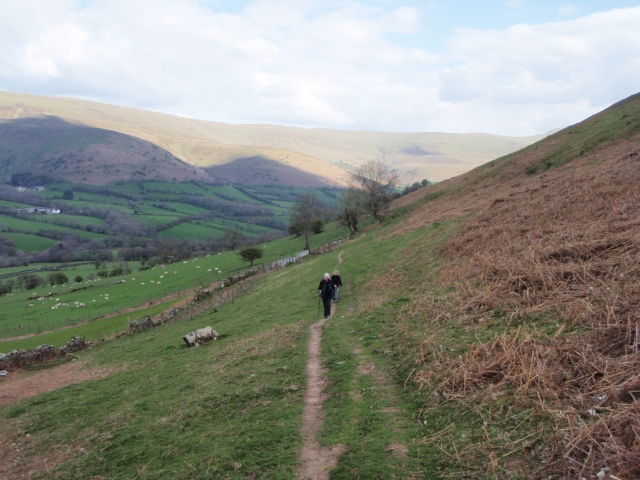 Open slopes to finish on

Not quite – the path around the base of the hill became rather crowded with dense vegetation and tree branches dislodged in the winter storms. We would have been much better contouring on the pathless slopes above, but some bushwhacking got us back on to more open ground. At 12 kms (7½ miles) and 530 metres (1740ft) this wasn’t a major expedition, but the hill has a ‘mountain’ feel to it – pity about that missing metre!    To finish a perfect day, the path took us back to the pub.   Did we go in?  Well, it would have been rude not to! 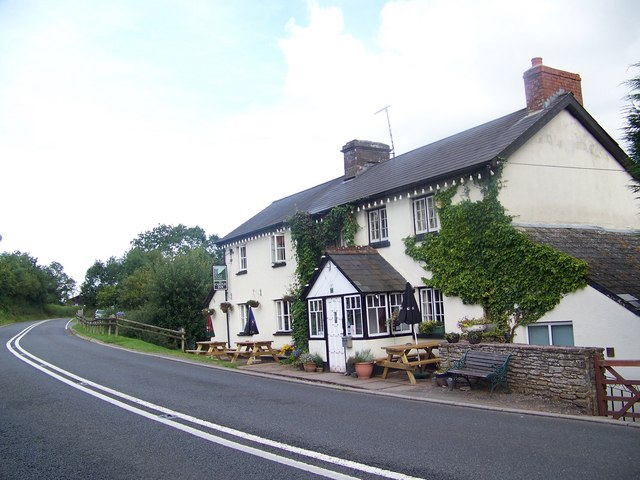 The Castle Inn, now renamed the Dragons Back

Text and images © Paul Shorrock, except the image of the Castle Inn which is taken from the Geograph Project, © Copyright ‘Miss Steel’ and licensed for reuse under this Creative Commons Licence.

I've been mucking about in the mountains for longer than I care to mention. I started out by walking my local hills, then went on to rock climbing, mountaineering and skiing. Still doing it, and still getting a buzz. I'm now sharing the fun, through my guided walking business (Hillcraft Guided Walking) and by writing routes for other publishers, mainly Walking World and Discovery Walking Guides. Just to make sure I keep really busy, I am also currently a member of my local mountain rescue team.
View all posts by Paul Shorrock →
This entry was posted in 6. Mid and South Wales and tagged Border Collie, hillwalking, mountains, photography. Bookmark the permalink.