#161 – Aber Falls and the Northern Carneddau

In September Chris and I took advantage of the unexpected late summer by heading a bit further afield to the hills of the Berwyns (two blog posts waiting in the queue) but then a free day and yet another forecast for sun tempted us back to the Carneddau. I’ve been to Aber Falls before, but usually just for a stroll out to the bottom or as an access point to the mountains of the Northern Carneddau – this time the plan was to have a mooch around on the paths above the falls. 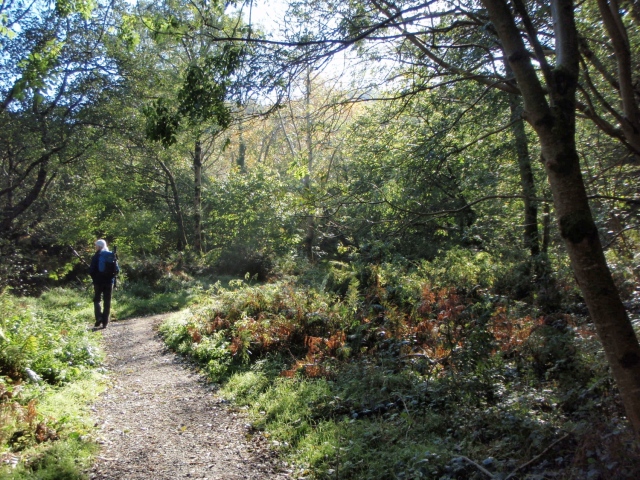 For those who have never been there, Aber Falls is a spectacular waterfall that plunges 120 ft (37 metres) into the valley below. It’s not the easiest of subjects to photograph though – there are few ideal viewpoints on the valley approach, and because the falls are north facing they are usually in shadow. The result is either an under-exposed image of the falls, or ‘bleached out’ surroundings. 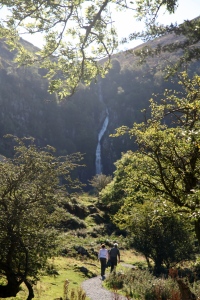 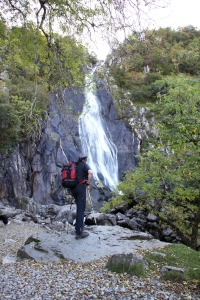 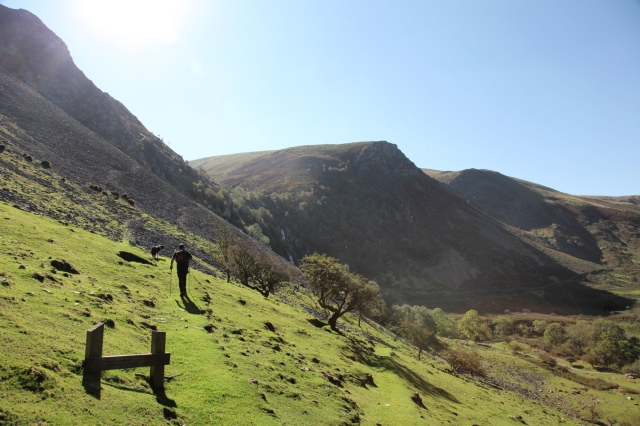 Autumn colours were starting to show as we set off, a reminder that summer was officially over – however, there seemed to be a breakdown in communication with the seasons as it was T-shirt conditions in the valley bottom. We made the almost obligatory visit to see the falls, which hadn’t changed at all since our last visit, or probably for that matter since the last Ice-Age. Having done that, we set off on the path to the top of the falls.

On the way up – a tree-climbing sheep! 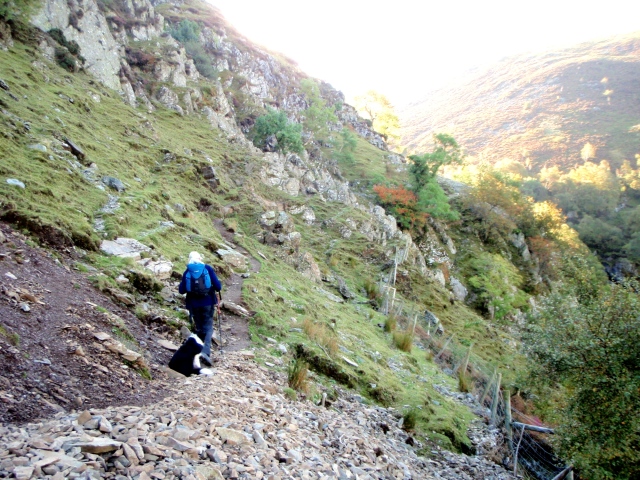 At the end of the scree slope …. 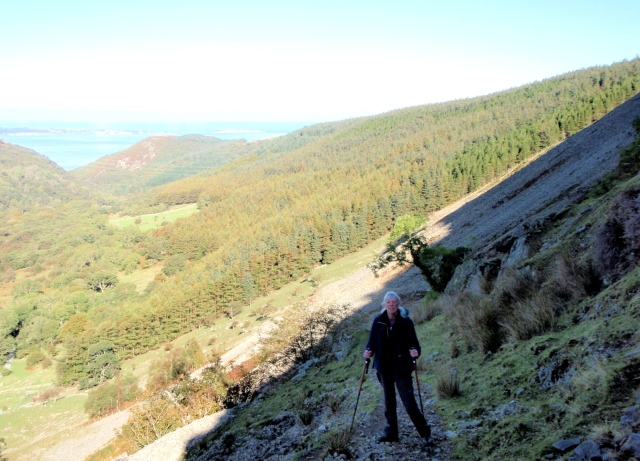 …. with the airy bit coming up

I had described to path to Chris before we set off, at least I described it as well as I could remember it. The first section crosses a scree slope, but the stones are nicely bedded in and don’t move much, so no problem there. Beyond there the route picks a way through small crags, and I had forgotten that some people (e.g. me missus) might not like the drop below the path in places, though I hadn’t really registered this before, insensitive soul that I am! 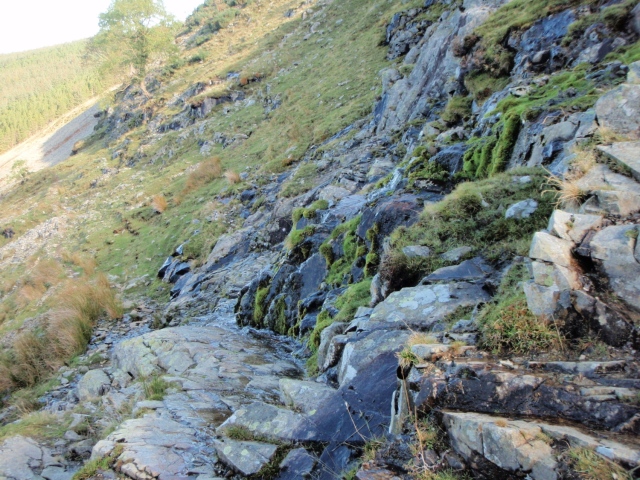 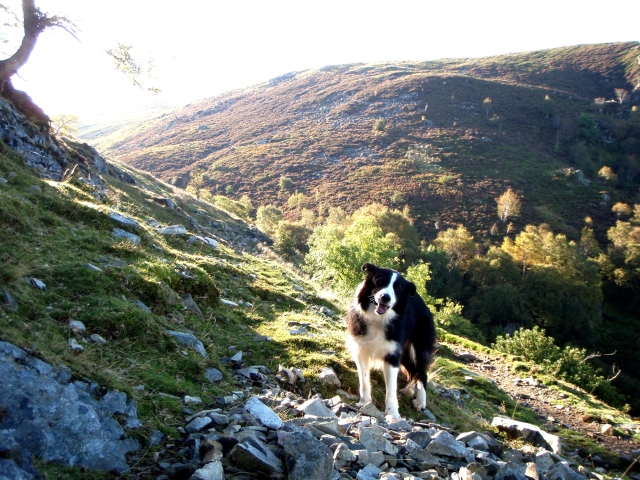 “Come on then, we haven’t got all day” 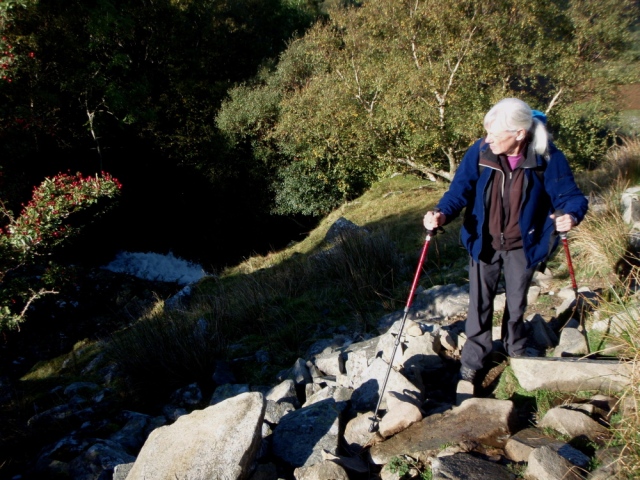 Beyond the airy bit there was one remaining problem. There is a greasy slab of rock, with a drop-off below, and it’s the kind of place you would not want to slip. On previous visits in dry conditions, the slab has required a bit of care, but this time it wasn’t just greasy – it was ‘well greasy’, complete with small stream flowing over it. Words of encouragement and a ‘helping hand’ got Chris over the obstacle, with Border Collie ‘Mist’ wondering as usual why we were taking so long. 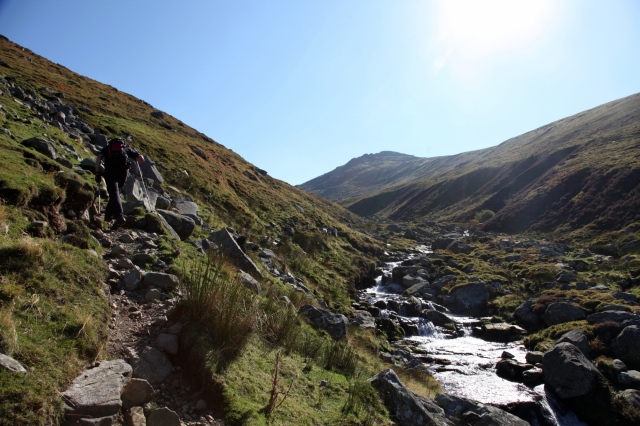 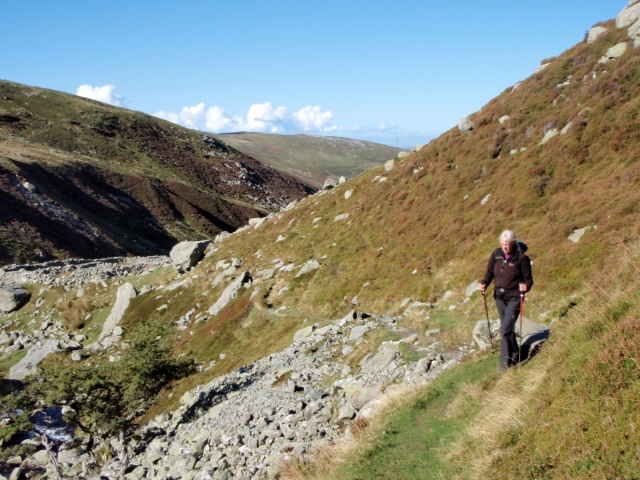 Just beyond the sheepfolds 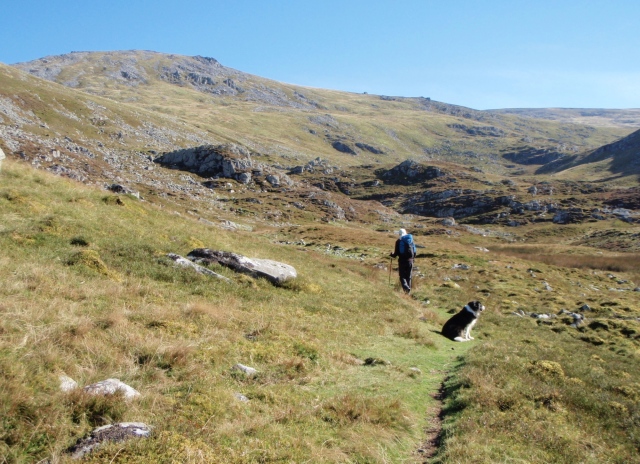 Heading up the valley with Llwytmor on the left 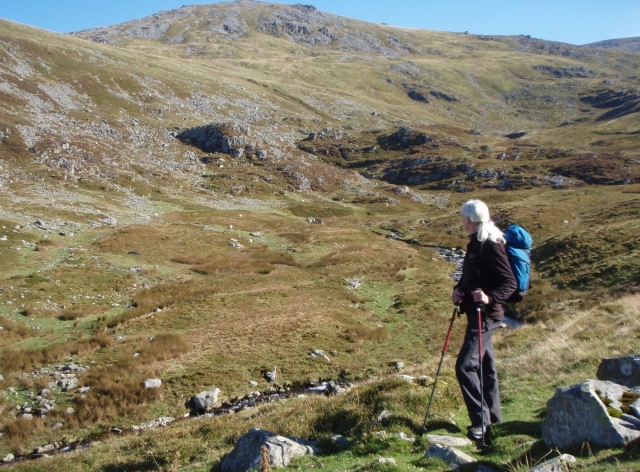 The view towards the coast

Our route carried on above the Afon Goch, passing the remains of old settlements and some more recent (but still quite old) sheepfolds, with the hills of the Northern Carneddau providing the view. The first of three stream crossings gave us some more amusement, but then it was time to turn to the north, and the view changed from mountains to coast. 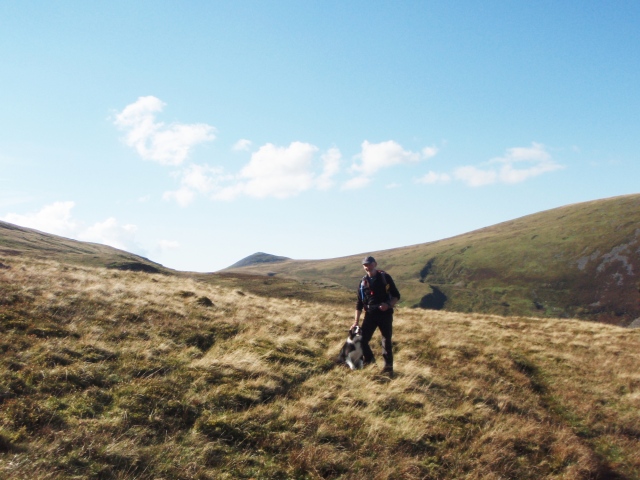 ‘One man and his dog’ 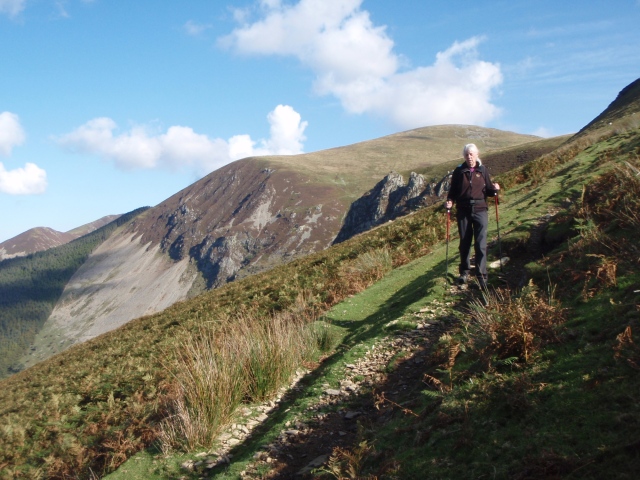 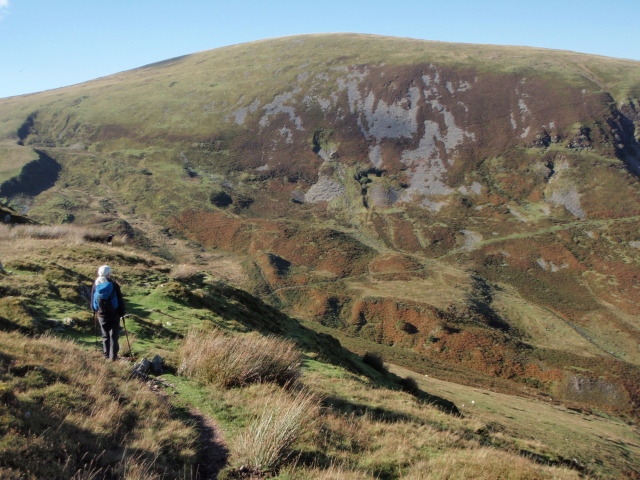 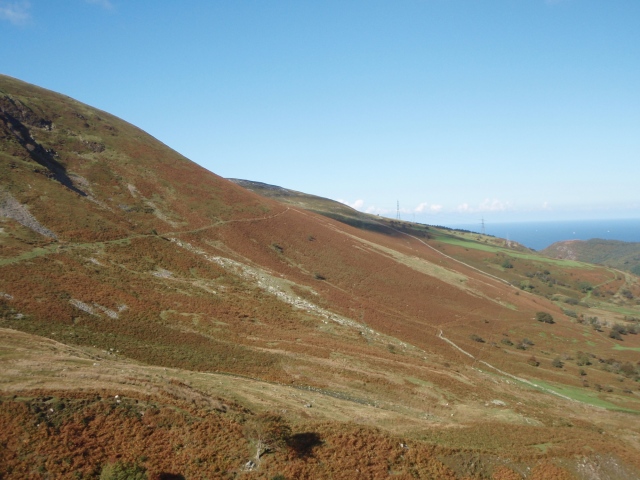 The path stretching out ahead 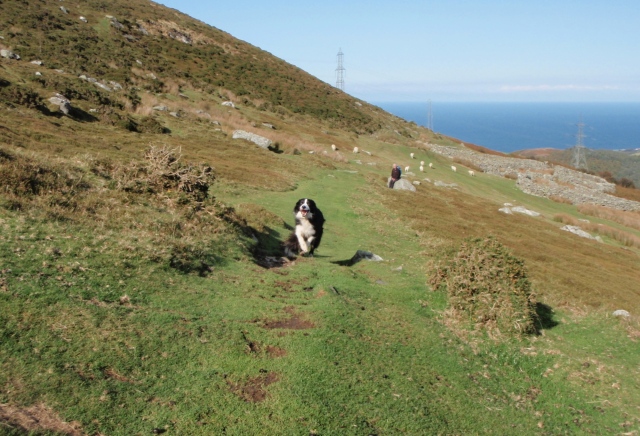 The path here contours around the hillside, making for easy progress, and it wasn’t very long before we were looking back towards our outward route. The scale of the Carneddau is so massive that from here Aber Falls looked quite insignificant. 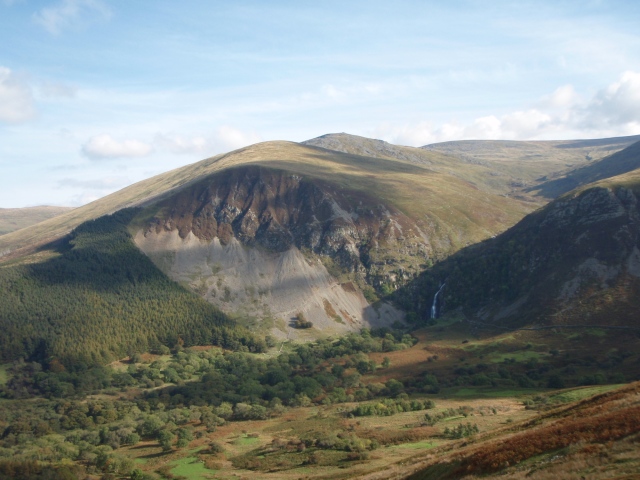 The Hills of the northern Carneddau 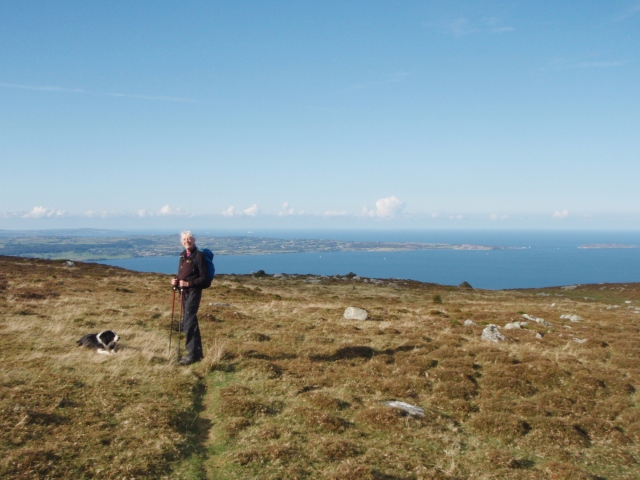 Above the coast at last 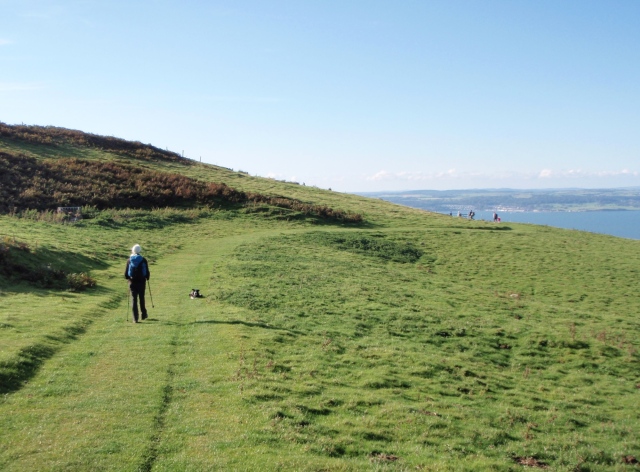 Before long we were on the North Wales Path overlooking the sea, with the coast and the new North Wales Coastal Path below us. Although we hadn’t ventured far into the Carneddau, the trip had felt like a mountain day, and only the long shadows as we finished indicated that summer really is over now.  Perhaps! 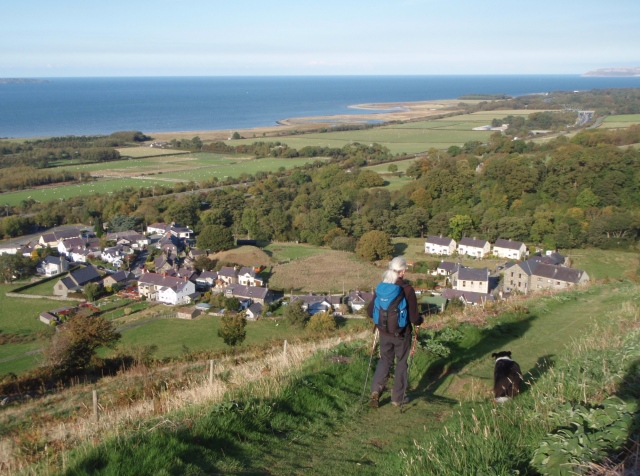 The end in sight – heading down to Abergwyngregin

I've been mucking about in the mountains for longer than I care to mention. I started out by walking my local hills, then went on to rock climbing, mountaineering and skiing. Still doing it, and still getting a buzz. I'm now sharing the fun, through my guided walking business (Hillcraft Guided Walking) and by writing routes for other publishers, mainly Walking World and Discovery Walking Guides. Just to make sure I keep really busy, I am also currently a member of my local mountain rescue team.
View all posts by Paul Shorrock →
This entry was posted in 5. North Wales and tagged Border Collie, Carneddau, hillwalking, mountains, photography, Snowdonia, waterfall. Bookmark the permalink.

11 Responses to #161 – Aber Falls and the Northern Carneddau