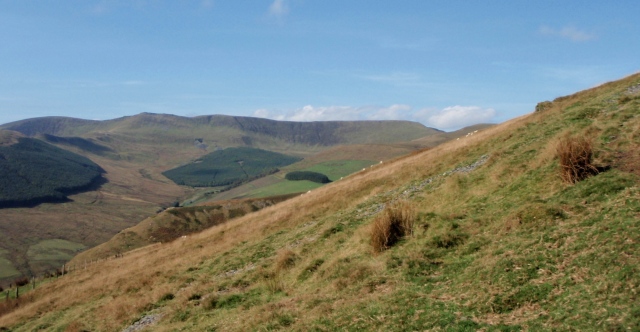 The Berwyn Ridge from Mynydd Tawr

A walk in an area that I’m not too familiar with usually prompts a return visit, and the Berwyn Ridge (see post #162) was no exception, so in less than a week I was back again and enjoying the fine settled spell of weather we had for much of October. It looked like being a bit of a leg stretcher though, so Chris opted out of this one leaving Border Collie ‘Mist as my companion for the day.

A long, steady ascent to start with …. 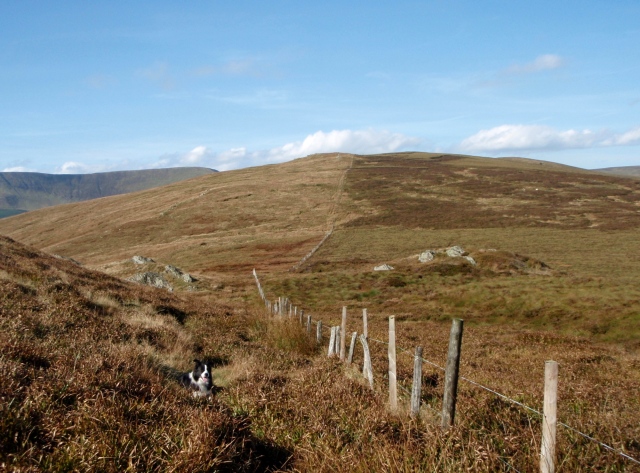 …. and a view of the Berwyn Ridge ahead

The plan was to follow the ridge line over Mynydd Tarw, Foel Wen and Tomle to join the Berwyn Ridge, then crossing Cadair Berwyn before dropping down onto Moel yr Ewig to return via Godor – in effect doing a horseshoe route of Cwm Maen Gwynedd. After a short ascent of Mynydd Tarw, the way ahead was a long roller-coaster ride, with great views towards the Berwyn Ridge. 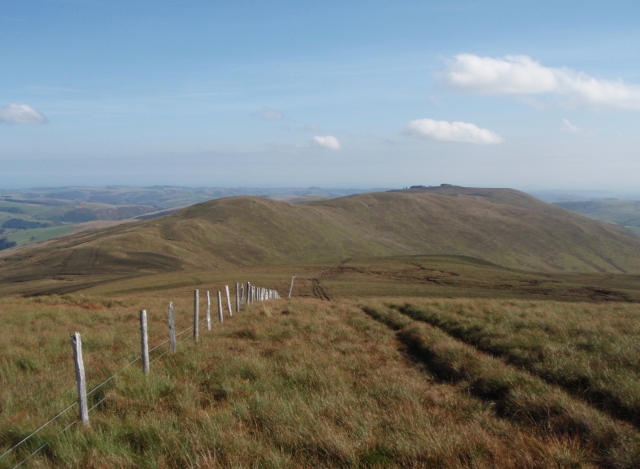 …. and looking back at the route behind

Cadair Berwyn (in the centre)

The final section of ascent to the Berwyn Ridge

‘Mist’ at the boundary stone at the bwlch

The Berwyns have a reputation for rough heathery ground, but the route was easy going in this case. From Tomle I passed a boundry stone at a bwlch (Welsh for ‘pass’) before the final height gain to the Berwyn Ridge – the high ground ahead was the setting for a double tragedy in 1942, with two flying accidents occurring within a day of each other. 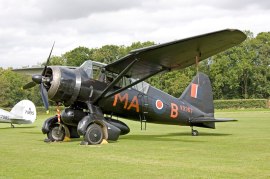 ‘Mist’ at the site where the Spitfire came to rest

On 14th December 1942, Sergeant Pierre Degail of the Free French Air Force set out from RAF Mountford Bridge on a training flight in a Spitfire. The weather was good, but something caused the aircraft to crash on Cadair Berwyn. The next day, Flight Lieutenant Douglas Harvey Walker left the same airfield flying a Lysander spotter aircraft. He was tasked with searching for the missing Spitfire, and despite poor weather conditions he was successful in locating the crash.

The view that Sgt Degail would have had from the wreck

The cwm where the Lysander crashed

As he circled the wrecked Spitfire, which was mainly intact, he saw that Sgt Degail was still alive and in the cockpit of the aircraft.  Moments later the Lysander was caught in a downdraught, and crashed in the adjacent cwm, within 300 metres of the Spitfire.   Flt/Lt Walker was killed in the crash, and when a rescue party reached the Spitfire they discovered that Sgt Degail had died of exposure – his legs had been broken in the crash, and he would have been unable to find shelter from the freezing weather conditions.

How much sadness can one small bit of Welsh hillside hold? On 11th August 1942, just four months earlier, an American B17 Flying Fortress on a training flight had crashed into the hillside immediately below the final resting place of the Spitfire, in a completely unrelated accident – the crew of 11 were all killed.  (On checking the map when I got home, I realised that I had passed within 500 metres of yet another air crash site – on 23rd March 1940 a Bristol Blenheim crashed on the slopes of Mynydd Tarw whilst also on a training flight)

Looking back to my outward route from the Spitfire crash site

The view down to Llyn Lluncaws

I left the scene of the double tragedy behind me, and carried on over Cadair Berwyn – these hills are remarkably quiet, and apart from some daredevil sheep who had found a good source of grass on the rocks of Craig Berwyn, the only other life on the summit ridge was one lone walker, the only other human I saw all day.

The start of the descent to Moel yr Ewig

Further down the path ….

…. and looking back to the descent 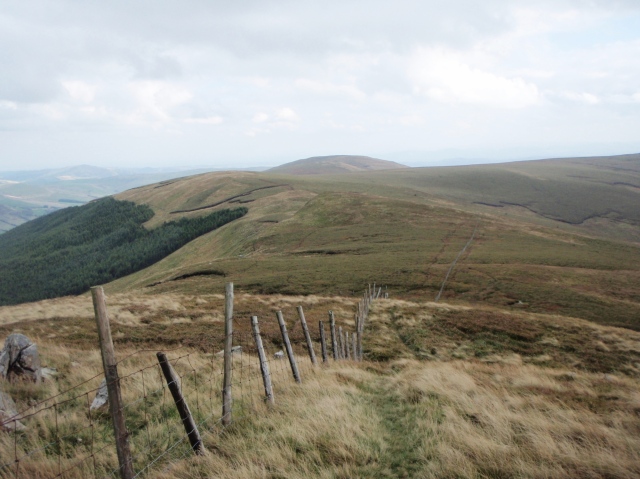 Final view of the Berwyn Ridge

Then it was time to head back along the other broad ridge. A steep descent took me down to Moel yr Ewig, before a ‘yomp’ across a moor that was almost Pennine in character. The final view of the Berwyn Ridge from Godor soon dispelled that idea though – these are real mountains, without any doubt! 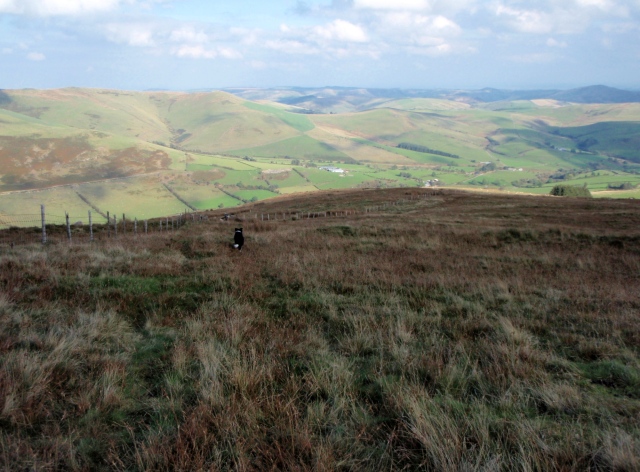 Heading down to the valley

I've been mucking about in the mountains for longer than I care to mention. I started out by walking my local hills, then went on to rock climbing, mountaineering and skiing. Still doing it, and still getting a buzz. I'm now sharing the fun, through my guided walking business (Hillcraft Guided Walking) and by writing routes for other publishers, mainly Walking World and Discovery Walking Guides. Just to make sure I keep really busy, I am also currently a member of my local mountain rescue team.
View all posts by Paul Shorrock →
This entry was posted in 5. North Wales, Aircrash Sites and tagged Berwyns, Border Collie, hillwalking, mountains, photography, Snowdonia. Bookmark the permalink.