When we look back on 2014, in North Wales we will remember the wettest August for a long time, followed by a prolonged spell of warm, settled weather. Then, just a week ago, winter arrived, and not before time, because some of us have ice-axes, skis and other toys to dust off. It was only a hint of what may be coming, but good to see.

Looking back to Capel Curig, just after setting off 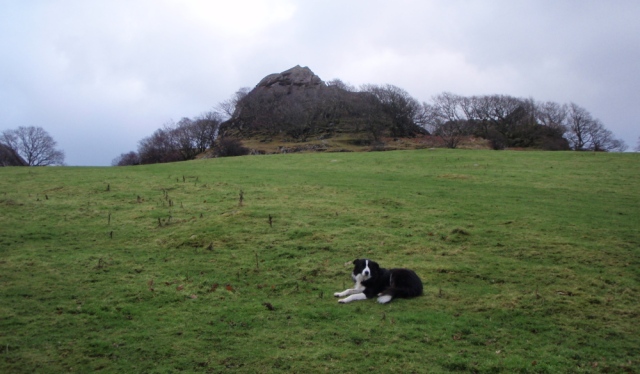 Border Collie ‘Mist’ behind ‘The Pinnacles’ at Capel Curig

Looking back to Moel Siabod as we set off …. 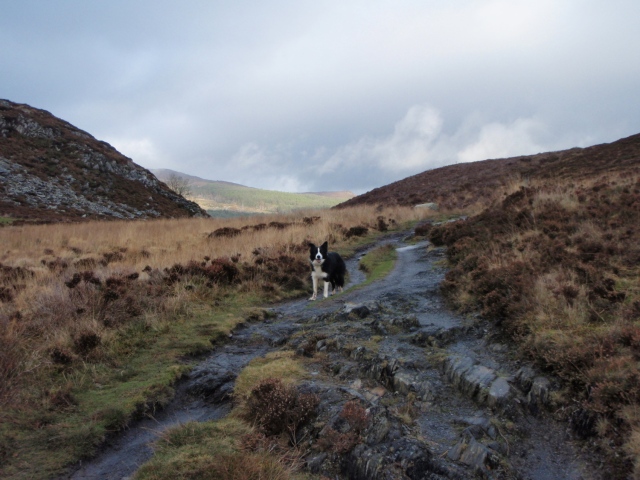 …. and ‘Mist’ waiting, not very patiently, as I take photographs

The path from Capel Curig to Trefriw

I’d decided on a route in the hills north of Capel Curig in North Wales – they are part of the Carneddau mountains, but the Llyn Cowlyd Reservoir cuts these hills off from the main Carneddau plateau. The plan was to take in the highest summit, Creigiau Gleision, via Crimpiau and Craig Wen and then to return by the shore of Llyn Cowlyd. The wind speed was forecast to be high and increasing as the day progressed, with gusts up to 70 MPH. 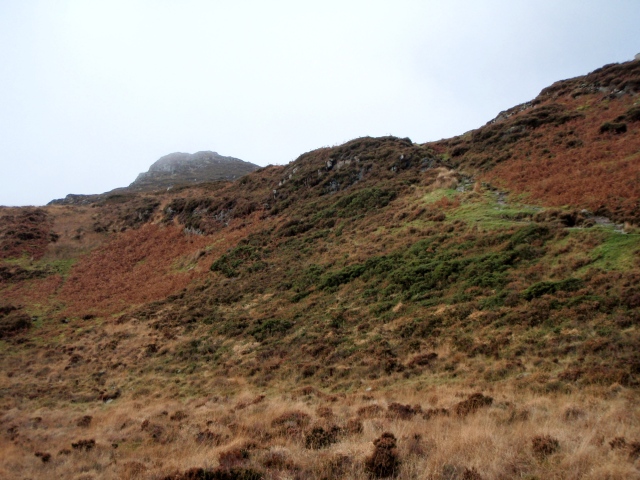 The first summit ahead – Crimpiau

Getting closer to the summit of Crimpiau

Llyn Crafnant and Allt Goch from the summit path of Crimpiau 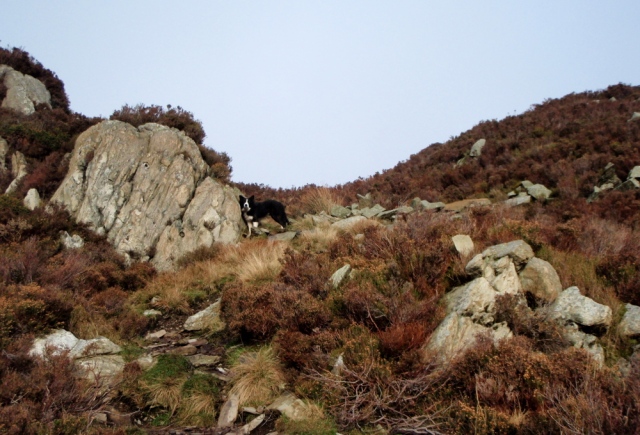 The summit gets nearer

Looking ahead to Craig Wen, the next peak, with Tryfan in the distance on the left

I set out knowing that a retreat was possible.  As well as the forecast of high winds later in the afternoon, the ground conditions were not good.  Over the summer the mountains have been so dry that on occasions I’ve had to hunt out water for ‘Mist’ on the high plateau of the Carneddau – on this trip almost every step was a puddle, and boggy ground made progress even slower than expected, but despite this I made steady progress.

Looking back to Craig Wen on the approach to Creigiau Gleision 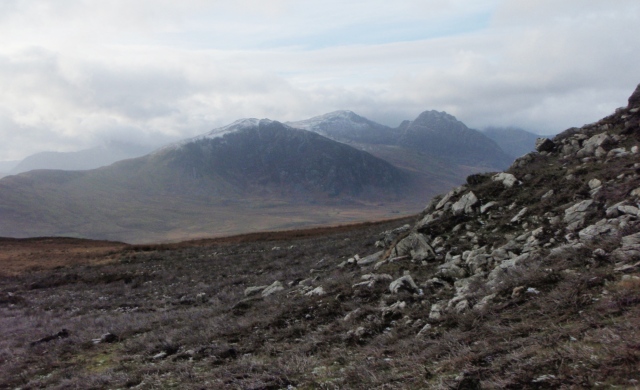 The mountains of the Glyderau, with Tryfan (on the right) now more obvious

As I approached Craig Wen it became obvious that the wind speed was beginning to increase as forecast. The decision to turn back or carry on had to be made. I was certainly going to be able to clear Creaigiau Gleision in time as the wind was on my back, and the return was on low ground by the lake – my concern was that the valley would act as a wind tunnel, with the wind directly against me. A finish in the dark would also add to the fun.

Heading back towards Craig Wen after turning back

Wet, muddy paths on the descent

Looking down to Capel Curig

As Creigiau Gleision came into view, I turned back.   I could have continued and possibly had a bit of an epic, but nowadays I usually blunder into an epic rather than seeking one out. I took a slightly different way back down Crimpiau and in doing so managed to find more bogs that I had missed on the outward leg!   I’ll be back though – I’ve walked most of the Carneddau now, and I need Craigieau Gleision to complete the set.

Down at last, and heading for home

I've been mucking about in the mountains for longer than I care to mention. I started out by walking my local hills, then went on to rock climbing, mountaineering and skiing. Still doing it, and still getting a buzz. I'm now sharing the fun, through my guided walking business (Hillcraft Guided Walking) and by writing routes for other publishers, mainly Walking World and Discovery Walking Guides. Just to make sure I keep really busy, I am also currently a member of my local mountain rescue team.
View all posts by Paul Shorrock →
This entry was posted in 5. North Wales and tagged Border Collie, Carneddau, hillwalking, mountains, photography, Snowdonia, winter. Bookmark the permalink.