In July 1887, two teachers from Giggleswick School near Settle decided to have a stroll over Ingleborough (724 metres/2375ft). When they got there, Whernside (728 metres/2388ft) must have looked inviting in the distance, so they carried on. At Whernside they must have had a good view of Pen y Ghent (691 metres/2267ft) which was eight miles away as the crow flies, so they continued their walk to include that peak as well. By the time they had finished, they had completed what was probably the first Three Yorkshire Peaks walk. 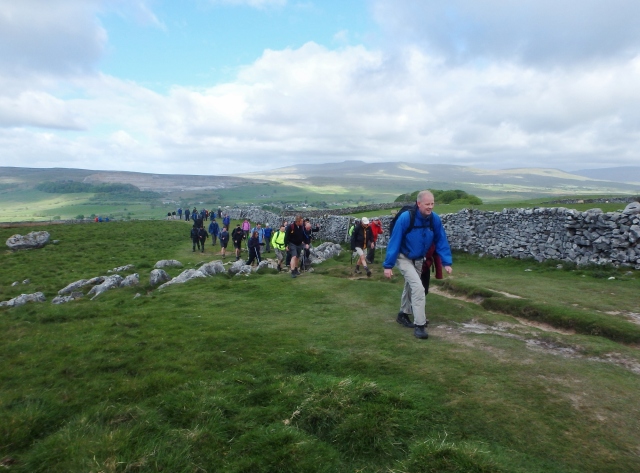 Not long after the start, leaving the valley behind …. 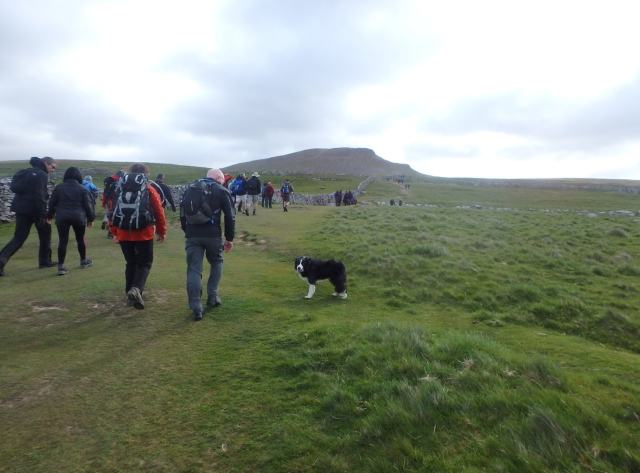 …. and heading for Pen y Ghent, the first peak of the day

Ten years later, four members of the Yorkshire Ramblers club set a record of 10½ hours for the 40kms (24½ miles) walk. These aren’t big hills, but the ascent (and subsequent descent) of all three peaks makes for a total height gain of 1500 metres (5000ft), making the trip the equivalent of a respectable hike in the Scottish Highlands. To make the circuit more challenging, most walkers aim to do the route in under twelve hours – my best time when I was young and fit was under six hours, but that was dawdling compared with the fastest ever circuit in 1974 of 2½ hours. 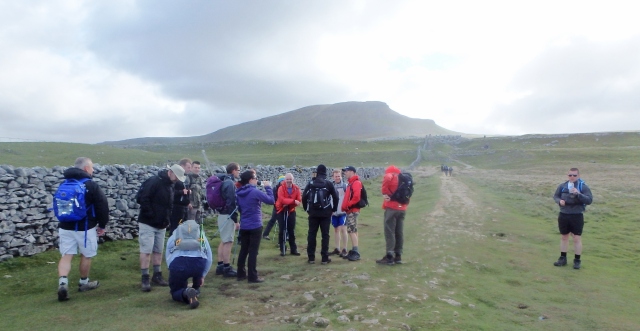 In the early stages, Pen y Ghent dominates the view 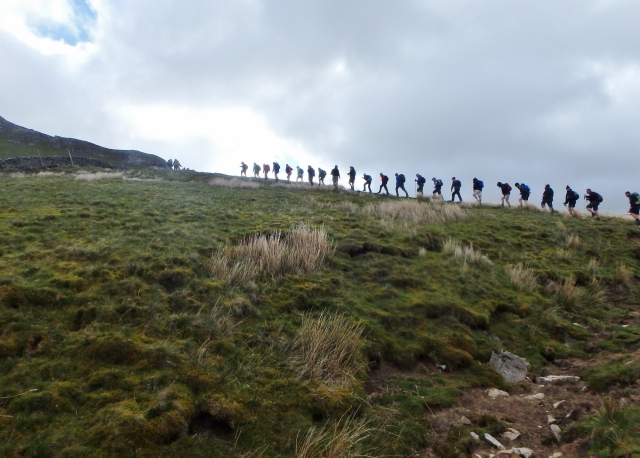 Nearly on the South Ridge 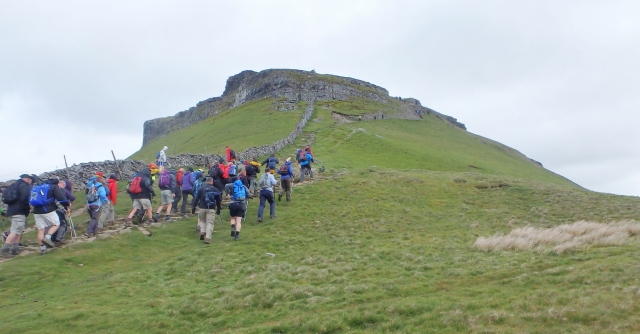 The South Ridge, with the crags ahead

In 2010 I had a guidebook to the Y3P Challenge walk published, and when I moved to North Wales I thought that was probably the end of my serious involvement with the route, but life isn’t like that. After joining my local mountain rescue team NEWSAR (North East Wales Search and Rescue), I found that every year they support a local banking organisation on a sponsored circuit of the Y3P Challenge – NEWSAR sends a few members along to encourage and advise the walkers, and in return we get a substantial donation to our funds. 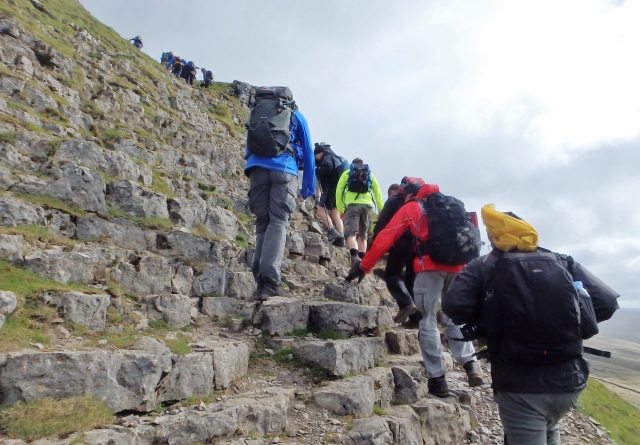 The group gets to grip with the rocky section 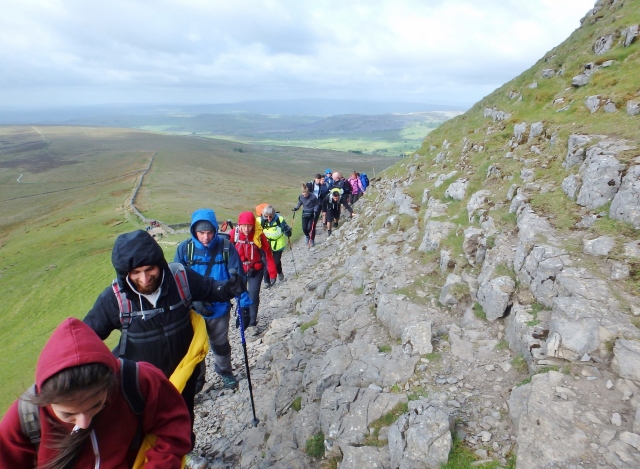 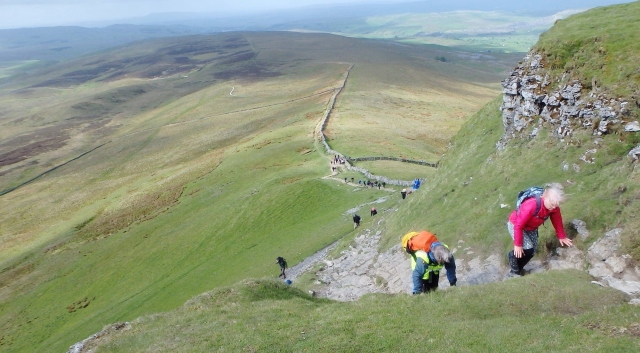 And that’s how I came to be in Horton in Ribblesdale at 0730 on a blowy Saturday morning. Blowy doesn’t quite catch the flavour of the day; the weather forecast suggested that gale force winds were likely, and I followed my usual practice of checking several different forecasts until I found the most encouraging one, only this time the trick didn’t work – so, blowy it was going to be. 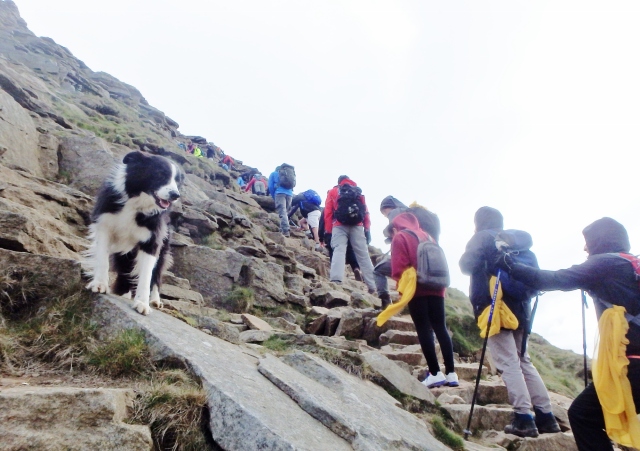 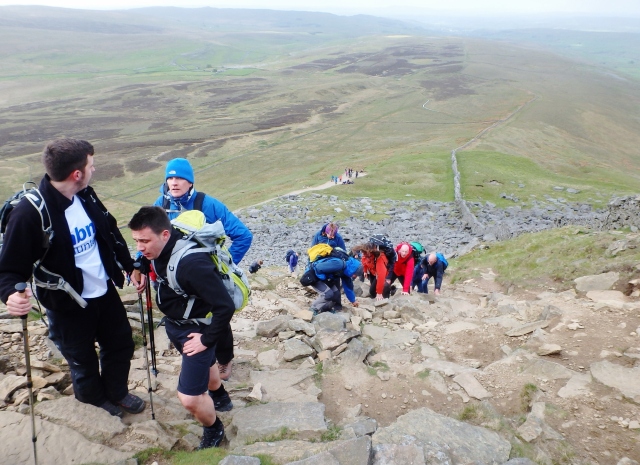 The view back down the South Ridge 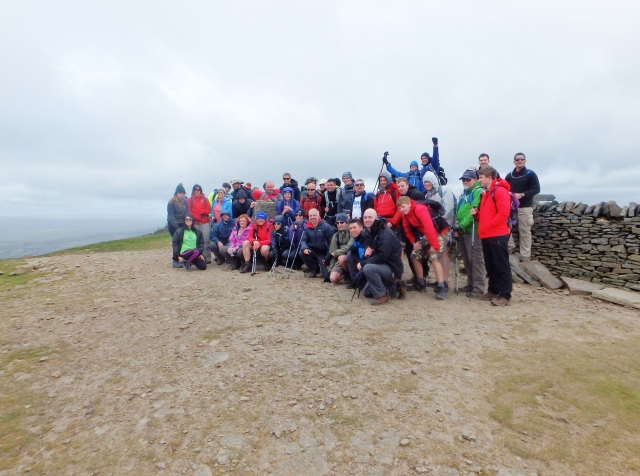 The group at the summit of Pen y Ghent, one down and two to go!

I take Border Collie ‘Mist’ along on trips like this, if for no other reason than she sulks when left behind. Gale force winds don’t bother Collies, especially when they are in 4X4 mode, but the conditions weren’t too bad until high on the South Ridge of the first peak, Pen y Ghent. This is my favourite part of the route, with the track wandering about through small crags, but the blustery conditions demanded (and got) full concentration. 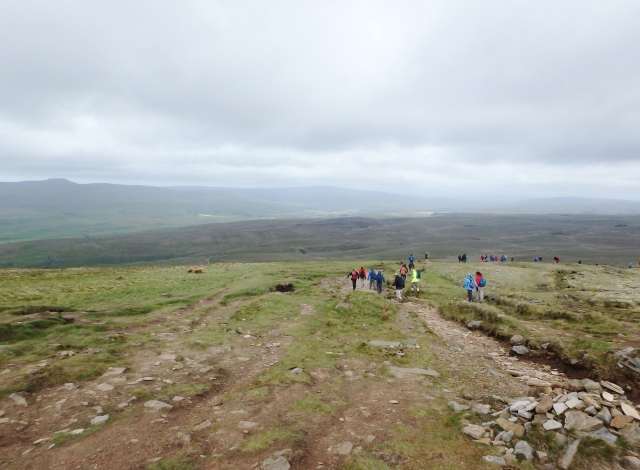 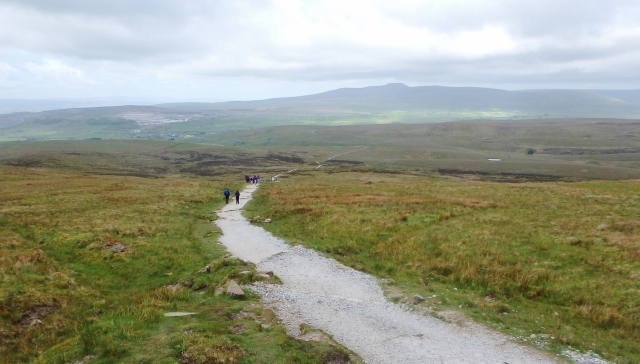 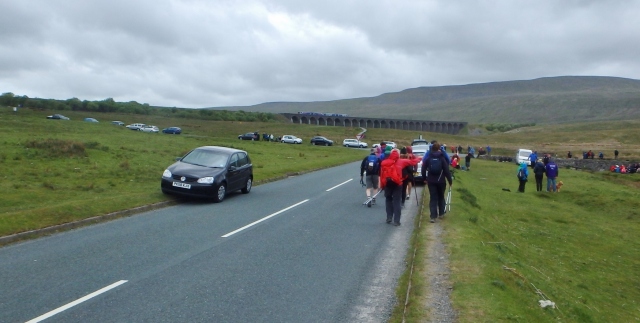 …. and eventually to the first pit stop at Ribblehead

Then suddenly, we were at the top with one peak down and two to go. The next bit is a long haul to a ‘pit stop’ at Ribblehead, with the second peak of Whernside beckoning but seemingly never getting nearer. At the pit stop there was just time for a couple of sandwiches and a drink and then we were off again! 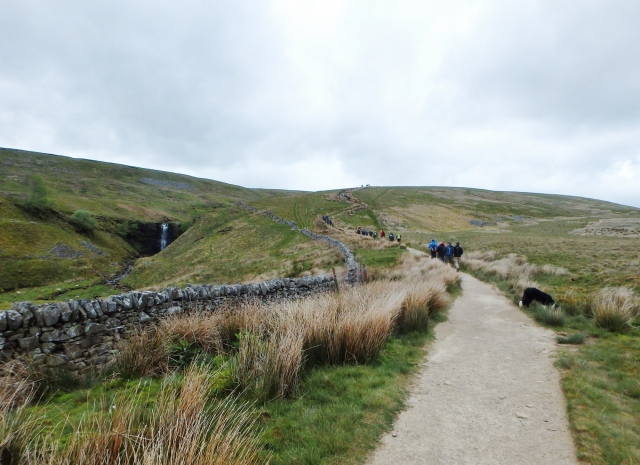 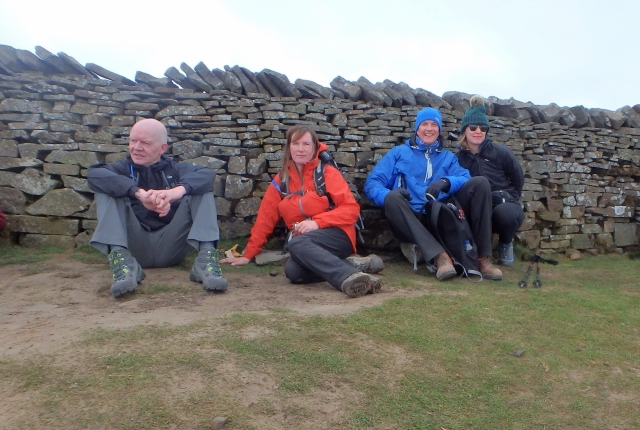 On the summit of Whernside, two down and one to go!

It was still windy on the ascent of Whernside, but we were mostly on the lee side of the hill – however, as soon as we hit the summit ridge we walked into a maelstrom, and the usual enjoyable stroll to the top became a struggle to walk in a straight line – summit photos were taken with the walkers sheltering behind the stone wall on the ridgeline! 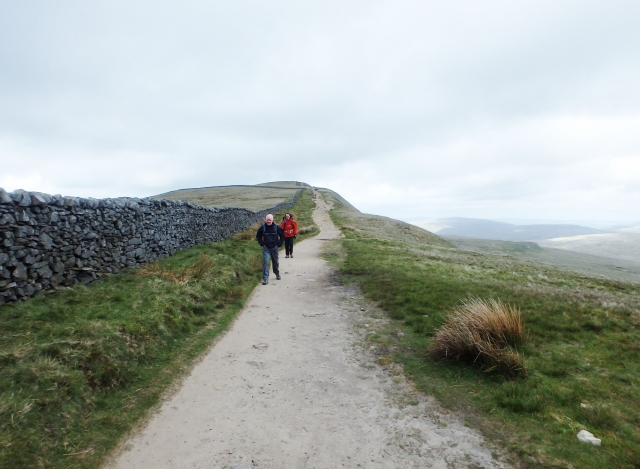 The start of the descent from Whernside summit …. 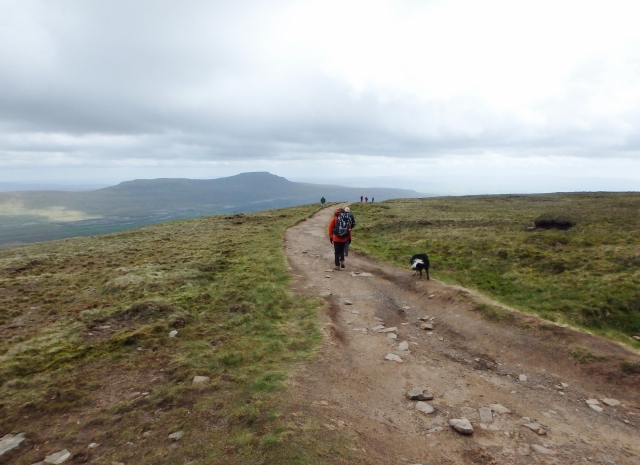 …. with nest peak Ingleborough far away in the distance 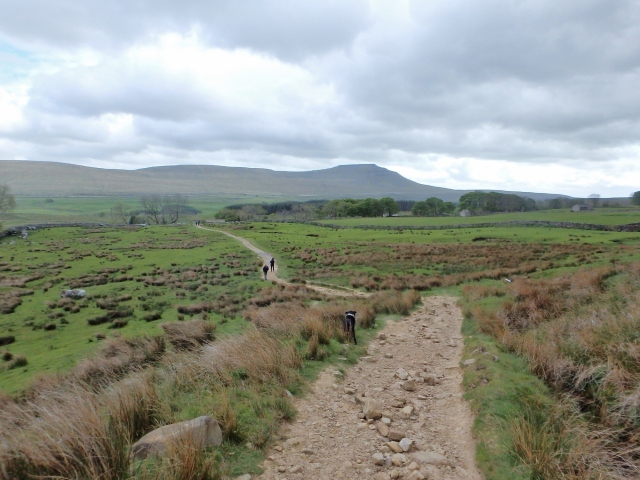 Heading back to the valley, with Ingleborough still a long way off

The routine of heading towards a distant summit that never seemed to get nearer was repeated, but with Ingleborough in the frame this time. 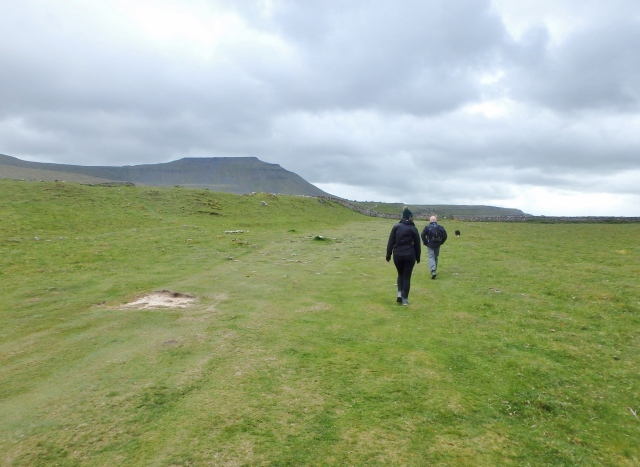 Just after the second pit stop at Chapel le Dale …. 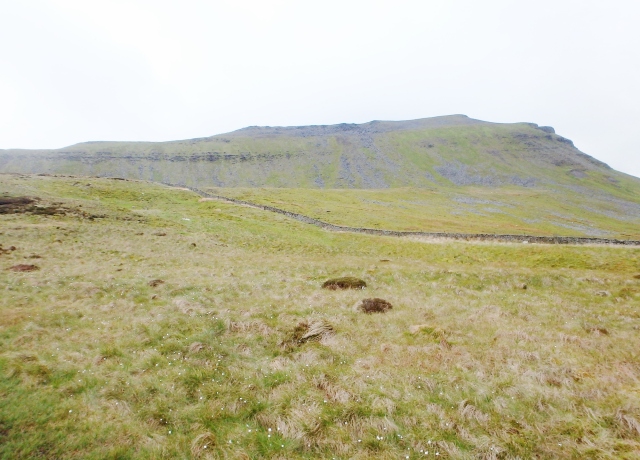 …. with Ingleborough getting nearer at last …. 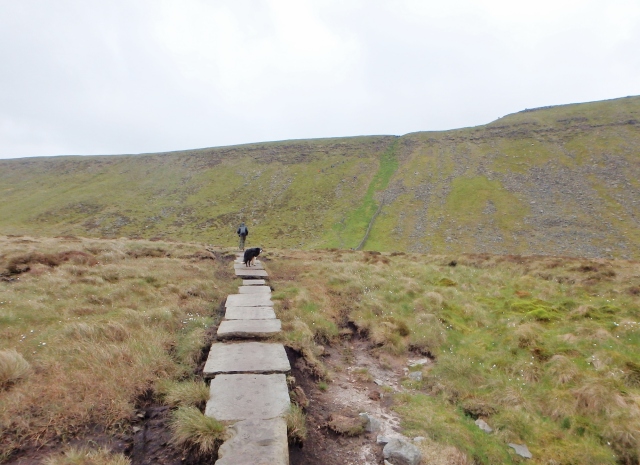 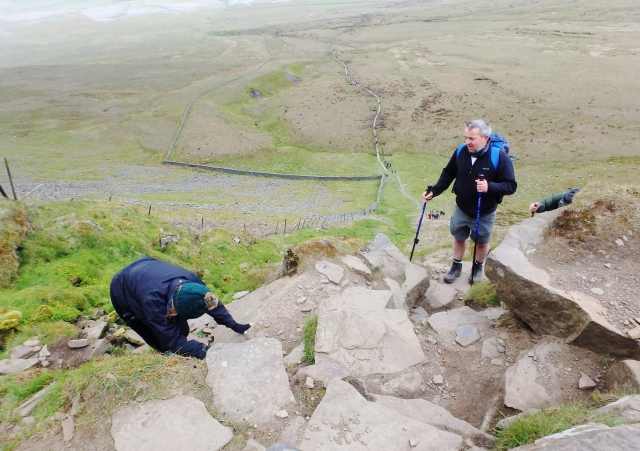 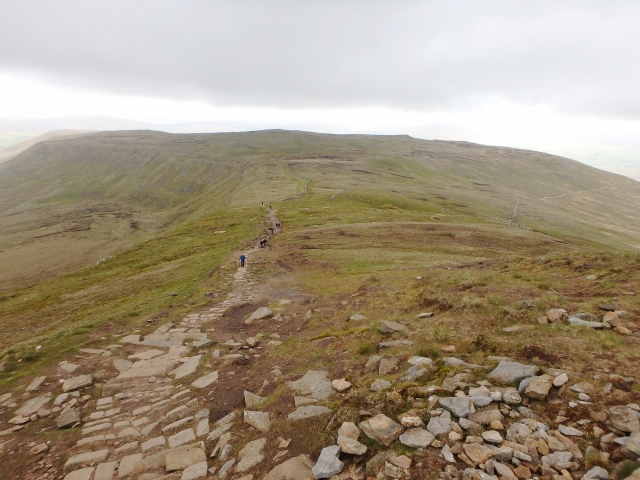 …. then things start to calm down a bit

A second pit stop at Chapel le Dale set everyone up for the last effort of the day. The route up Ingleborough set off nice and steady, with height gain being almost imperceptible, but that illusion was shattered by the way eventually becoming steeper – a final even steeper section was a bit of a sting in the tail, but beyond there the angle eased leading to the summit plateau. 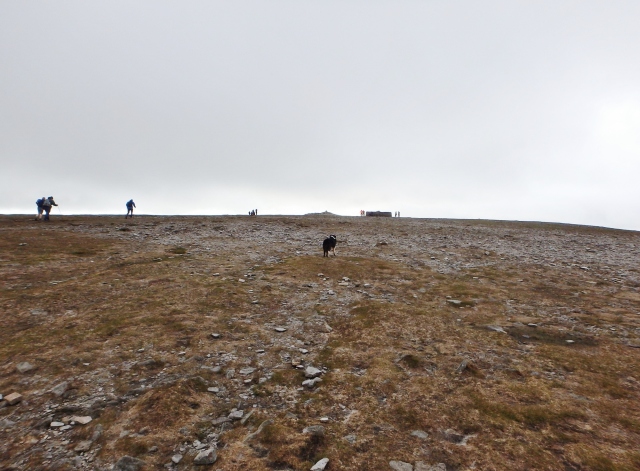 The summit plateau of Ingleborough 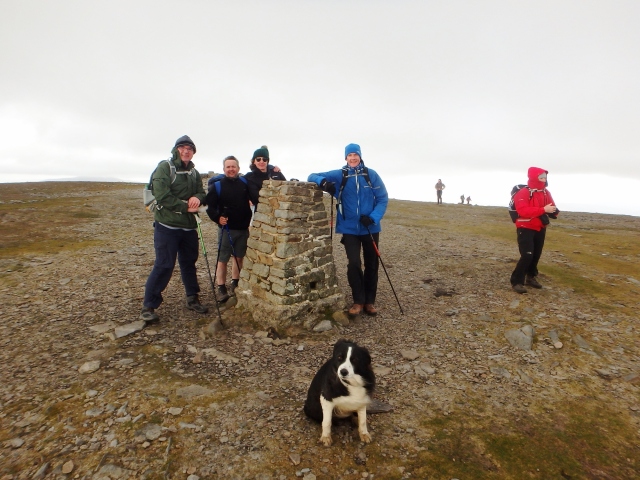 At the top! All three peaks done, but still a long walk out.

Those at the summit celebrated the third and final peak, but there was still the small matter of walking back to Horton in Ribblesdale. The last bit of grit and determination was mustered, but at least it was downhill! For me, it was yet another circuit completed, but the gale force winds had made it the most physically demanding round I had done to date – I was reminded about that the next day with aches where I don’t usually have aches! All being said, I’ll probably be back for more in the future. 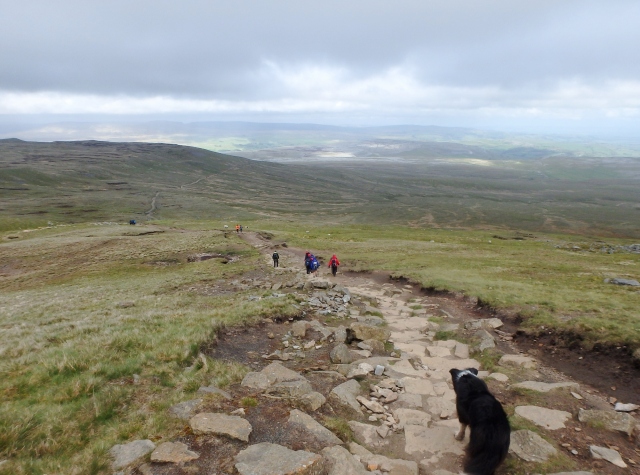 ‘Mist’ making sure that everyone is heading for home

p.s. Like all mountain rescue teams in the UK, NEWSAR is a self-supporting charity whose members are all unpaid volunteers, united in enjoying the hills and mountains and in making a contribution to our local community – if you wish, you can help us continue with that work by making a donation.

I've been mucking about in the mountains for longer than I care to mention. I started out by walking my local hills, then went on to rock climbing, mountaineering and skiing. Still doing it, and still getting a buzz. I'm now sharing the fun, through my guided walking business (Hillcraft Guided Walking) and by writing routes for other publishers, mainly Walking World and Discovery Walking Guides. Just to make sure I keep really busy, I am also currently a member of my local mountain rescue team.
View all posts by Paul Shorrock →
This entry was posted in 3. Yorkshire Dales and tagged Border Collie, Ingleborough, mountains, Pen y Ghent, photography, Three Peaks Challenge, Whernside, Yorkshire. Bookmark the permalink.