Looking down to Llyn Dinas

November 2016 saw a sudden change from the mild autumn we had been enjoying to a short, sharp taste of winter to come.    Chris didn’t fancy anything too dramatic and Border Collie ‘Mist’ was happy to be out anywhere, so it was my choice then – a couple of years earlier we had spent a warm, sunny autumn day in the hills above Beddgelert (see post #168) but had missed out a chunk of ground near to Llyn Dinas.    Time to remedy that then.

Walking out from Beddgelert with the Afon Glaslyn on the left 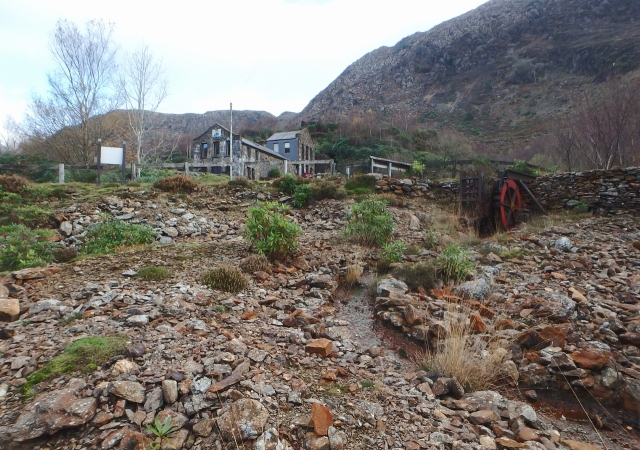 The path from Beddgelert to Llyn Dinas

Llyn Dinas and the lakeside path

It’s strange going to popular tourist spots out of season, and Beddgelert was the quietest I have ever seen it – it was definitely not an ice cream day, with a biting wind coming from the west, though a bright sun did much to lift things.    We left the town, heading alongside the Afon Glaslyn towards the lake of Llyn Dinas, passing below the Sygun Copper Mine, now an important tourist attraction for this part of Snowdonia.    No tourists today though. 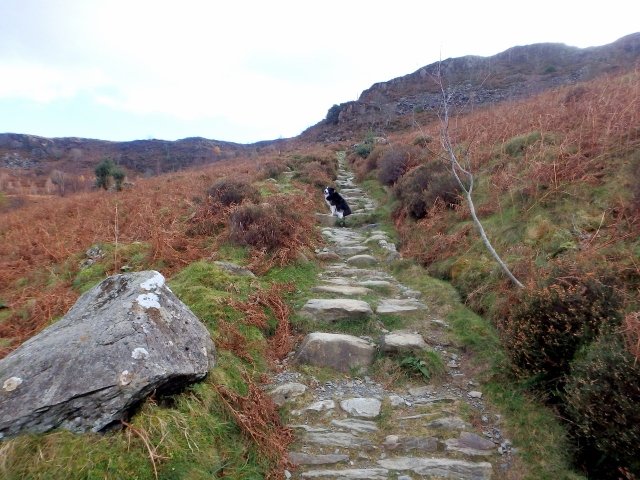 The view back to Llyn Dinas ….

…. and the way ahead

Just when you think it has levelled out ….

From the lake, it was time to gain some altitude.   The low sun meant that we started in the shade, but before long the sun was right in our faces – I had guessed it was going to be a sunglasses day, but had left them at home, so the pair of us screwed up our eyes against the bright light and the cold wind.   ‘Mist’ waited as patiently as an impatient Border Collie can, but was happy to take a break when the sandwiches came out and even happier to help scoff them.

The view across to Yr Wyddfa (Snowdon) ….

We managed to find a spot in the sun but out of the wind where we also had a grandstand view of Yr Wyddfa (Snowdon) to the north.    It was obvious that Mr Snow had paid a visit, and using a bit of imagination (well, OK then, a lot of imagination!) there appeared to be a similarity with one of the views of Everest.   Members of the 1953 Everest Expedition trained on Yr Wyddfa before the first ascent by exped members Tenzing Norgay and Ed Hillary, so perhaps my comparison wasn’t too wacky.

Looking back at the start of the descent down Cwm Bychan

Great views to the Moelwynion (Moelwyns) with (l to r) Cnicht, Moelwyn Mawr and Moelwyn Bach

It was soon time to start heading down into Cwm Bychan, with its relics of the cableway once used to transport copper from the mines down to Nantmor.    The air was as clear as a bell, with great views out to the hills of the Moelwynion, and I made a mental note that we must get out that way again in the near future.

Border Collie ‘Mist’ at the start of the Fisherman’s Path, Aberglaslyn ….

…. with the Afon Glaslyn flowing noisily below 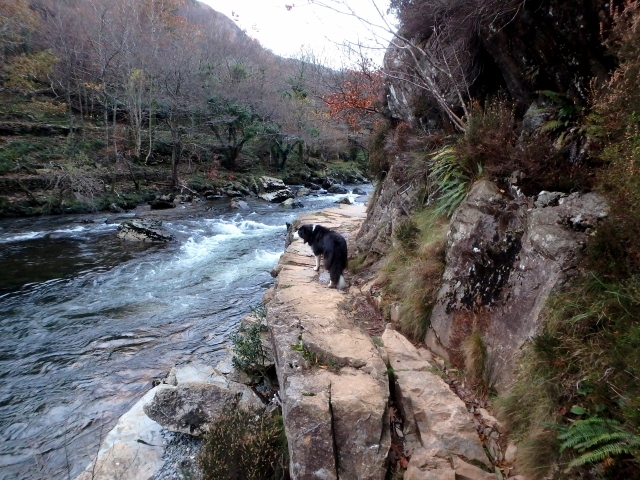 The rocky bit of the path, directly above the river ….

…. sometimes a bit too directly above the river for some!

Our return route was through the Aberglaslyn Pass – the Fisherman’s Path is one of the most dramatic lowland paths in North Wales, with the route in places clinging to rock walls above the noisy waters of the Afon Glaslyn.    I love night walking but Chris doesn’t share my enthusiasm, so I had timed things nicely to return to Beddgelert just as dusk descended.    As we arrived back in the dying light I had the spark of an idea – Yr Wyddfa had looked great under snow, and the weather for the next few days was settled – a return trip was on the cards.

Through the gorge at last ….

…. reaching Beddgelert with the dusk

I've been mucking about in the mountains for longer than I care to mention. I started out by walking my local hills, then went on to rock climbing, mountaineering and skiing. Still doing it, and still getting a buzz. I'm now sharing the fun, through my guided walking business (Hillcraft Guided Walking) and by writing routes for other publishers, mainly Walking World and Discovery Walking Guides. Just to make sure I keep really busy, I am also currently a member of my local mountain rescue team.
View all posts by Paul Shorrock →
This entry was posted in 5. North Wales and tagged Border Collie, hillwalking, mountains, photography, Snowdonia. Bookmark the permalink.