#217 – The Carneddau and Llyn Llyffant

The remote lake of Llyn Llyffant, the highest lake in Wales (820 metres above sea level)

Since moving to North Wales five years ago, I’ve become a big fan of the mountains of the Carneddau, and I’m still having fun exploring hidden corners where I haven’t been yet.   One place on my ‘to do’ list for some time was the highest lake in Wales – sitting at 820 metres (2690 ft) above sea level, Llyn Llyffant (‘Frog Lake’) is also one of the smallest lakes in Wales.    A trip there was long overdue, so last July I set out for a visit. 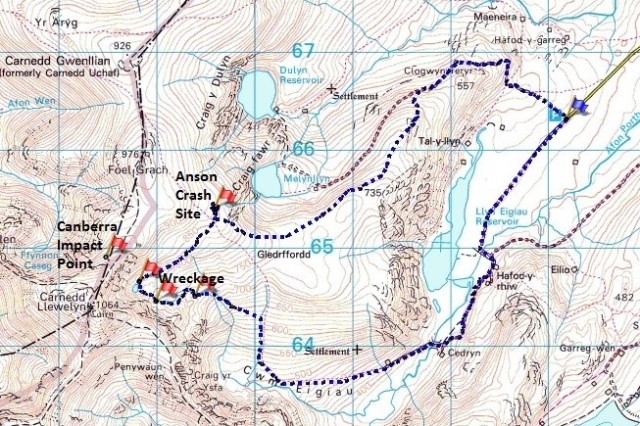 The route, clockwise from the car park

Setting out towards Cwm Eigiau

The tiny lake is located just below Carnedd Llewelyn, the highest peak of the Carneddau, but the most logical way in seemed to be via one of my favourite Carneddau spots, Cwm Eigiau.    The views on the walk-in are constantly changing, with the highlight being the magnificent climbers’ crag of Craig yr Ysfa. 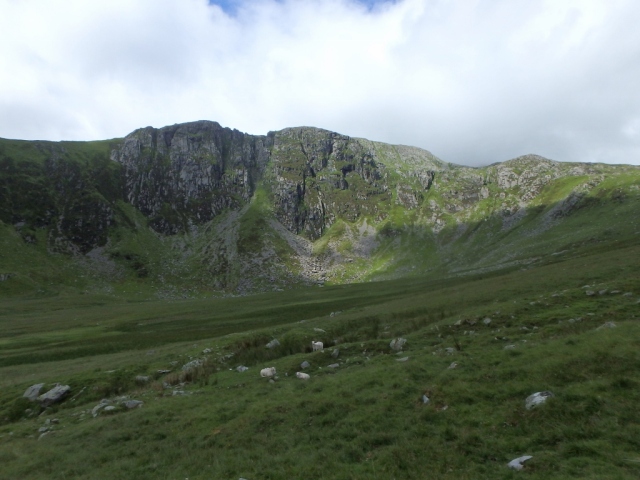 Legend has it that the crag was spotted by telescope in the late 19th Century by one of the famous rock-climbing Abraham Brothers – this would have quite a feat, as the telescope and user were in the Lake District at the time, about 150 kms away (90 miles or so), but there is a clear line of sight from Scafell Pike to Craig yr Ysfa, so the story may well be true.

Small waterfall on the Afon Eigiau 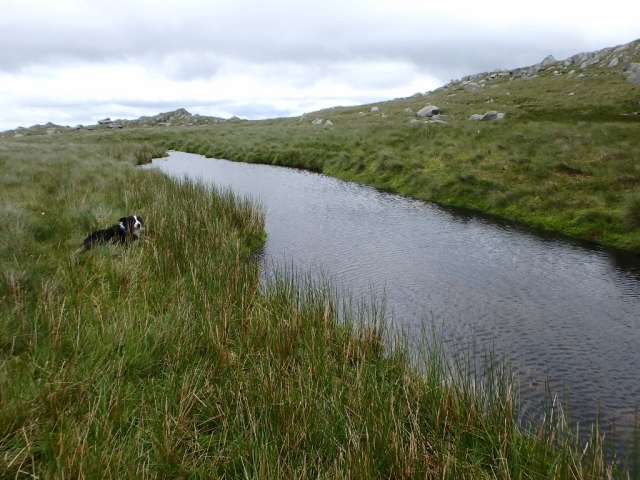 The upper reaches of the Afon Eigiau, not far from its source

From the Cwm I followed the small Afon Eigiau stream up to the lake.    The area is hardly ever visited, being off the beaten track, but in December 1957 it suddenly became the focus of much attention following a tragic aircraft crash.

The English Electric Canberra came into service with the Royal Air Force in 1951 as the first British jet-powered bomber, and for the rest of the decade the Canberra could fly higher than any other aircraft in the world, holding the world altitude record of 70,310 ft (21,430 metres).   Designed originally as an unarmed, high-altitude bomber the type became a versatile workhorse in service in the UK and beyond.

On 9th December 1957 Canberra WK129 was taking part in secret radar tests.    The aircraft had flown from RAF Pershore in Worcestershire to the Carneddau, where it carried out trials with a radar station on the summit of Drum (traces of the radar station can still be found there).    The Canberra continued out to Puffin Island near Anglesey before turning to travel back to base.

Aircraft wreckage in the Afon Eigiau

Looking up towards the lake of Llyn Llyffant

The aircraft was flying in patchy low cloud when it struck Carnedd Llewelyn on the ridge connecting the mountain to Foel Grach.   The forward end of the aircraft broke up,  leaving fragments of the forward fuselage on western side of the ridge. The centre section, wings and rear fuselage crashed to earth near Llyn Llyffant, though other pieces did travel some distance beyond here.    The destruction of the aircraft was such that the crew of two must have died instantly. 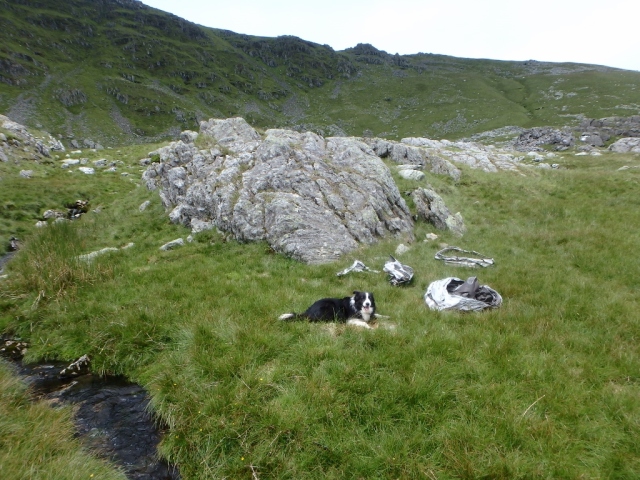 More wreckage from the Canberra 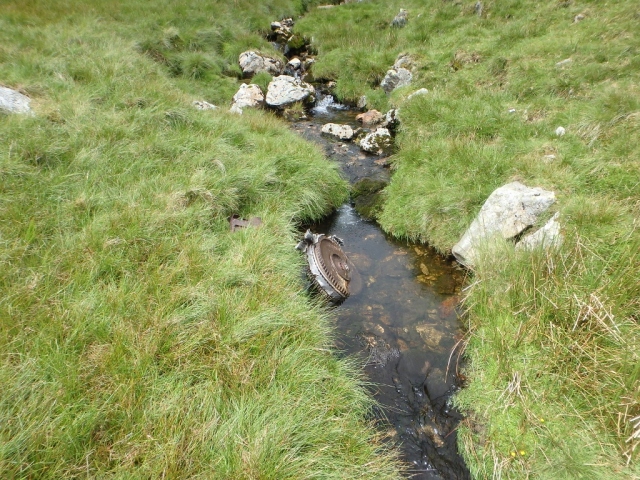 The reason for the crash remains a mystery, though the aircraft was below its safety height at the time of the accident.    A possible explanation is engine failure due to icing – icing conditions on the day of the flight were forecast above 3000 ft, and the initial impact point is at around 3280 ft (1000 metres)

Llyn Llyffant is now remote and quiet and would make a great wild camp site.    I stopped for a coffee and sandwich break, ably assisted (with the sandwiches anyway) by Border Collie ‘Mist’. 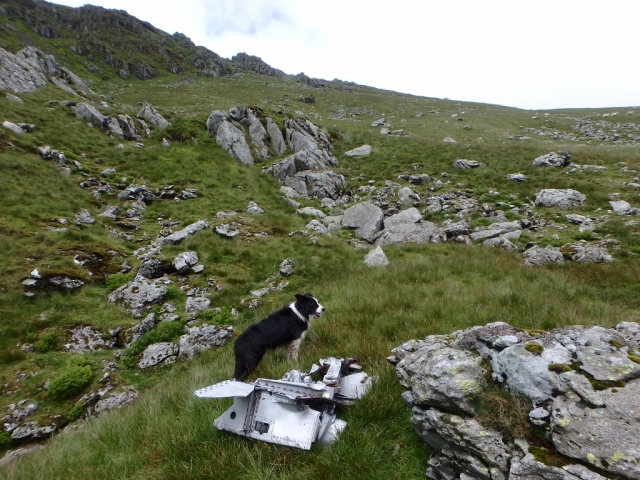 Next to the lake

Looking back towards Llyn Llyffant 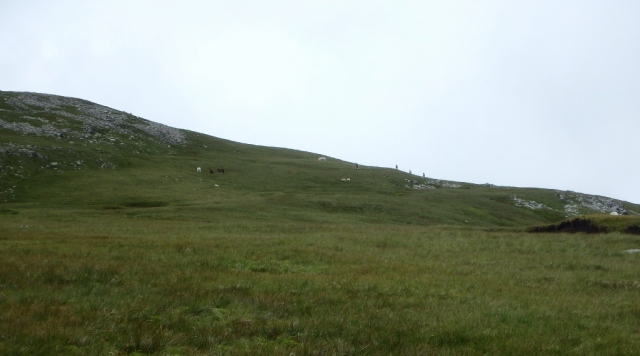 When it came time to leave I set off for another air-crash site nearby.  Although overcast, the visibility was great with great views back to the mountains surrounding upper Cwm Eigiau (Pen Llithrig y Wrach, Pen yr Helgi Du and Craig yr Ysfa) and despite the fair conditions, I saw just four other humans all day. 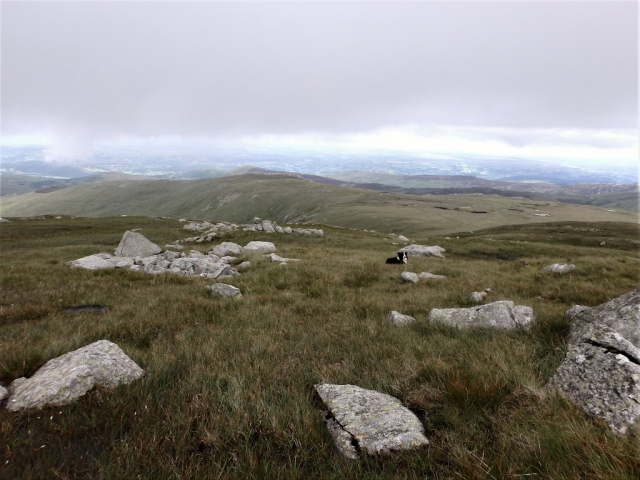 On 14th January 1943, an Avro Anson on a training flight struck the side of Foel Grach.  There are several Anson crash-sites near to here, not because the Anson was an unsafe aircraft, but because there were many more flights over this part of Wales in WW2.    The crew survived the impact, and the pilot managed to walk to a farm in the valley below.    The RAF Mountain Rescue Team from Llandwrog (now Caernarfon Airport) set out and searched into the night, but had to take shelter in deteriorating weather.   The aircraft was found the next day with one survivor, the other two crew members having died of exposure.    There is now no trace of the crash.

‘Mist’ with Melynllyn (reservoir) below

Heading back along the ridge of Cefn Tal Llyn Eigiau

The mountains of the UK are steeped in history, and the air-crash sites I had visited are part of that ongoing story, and make a fitting memorial to those who died, but I now had another important task lined up – ‘Mist’ was just about overdue for her dinner time, so it was time to head back home.

Back on the track – time to head for home

I've been mucking about in the mountains for longer than I care to mention. I started out by walking my local hills, then went on to rock climbing, mountaineering and skiing. Still doing it, and still getting a buzz. I'm now sharing the fun, through my guided walking business (Hillcraft Guided Walking) and by writing routes for other publishers, mainly Walking World and Discovery Walking Guides. Just to make sure I keep really busy, I am also currently a member of my local mountain rescue team.
View all posts by Paul Shorrock →
This entry was posted in 5. North Wales, Aircrash Sites and tagged Border Collie, Carneddau, hillwalking, mountain rescue, mountains, photography, Snowdonia. Bookmark the permalink.

6 Responses to #217 – The Carneddau and Llyn Llyffant