The annual epic event following the 268 miles of the Pennine Way National Trail in winter has earned the Spine Race the tag line of ‘Britain’s most brutal’, and there won’t be many who would argue with that description.  Walking Britain’s hilly spine over three weeks is a big enough challenge for most, but the athletes on the Spine Race have just one week to finish the course. 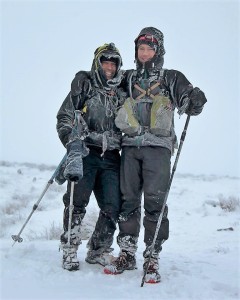 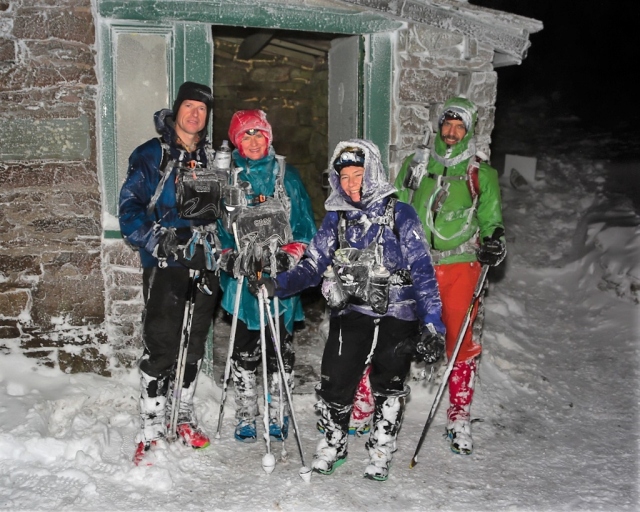 Cross Fell in Cumbria is the highest point in the race, and is frequently the most inhospitable.  Perched at 700 metres on the flanks of Cross Fell, Greg’s Hut is a haven in a very hostile environment, a place where the athletes get a temporary respite from the wind and snow.

Since the first edition of the race in 2012, John Bamber and I (plus Border Collie ‘Mist’) have made Greg’s Hut our home for three days in January.  Our Safety Team has always had a medic attached, and this year we were joined by Emergency Practitioner Kevin – we knew that we were all going to get on fine when Kevin offered to drive us all up to the hut in his Landrover.  It’s a long way to walk when there’s a total of fifteen rucksacks to shift! 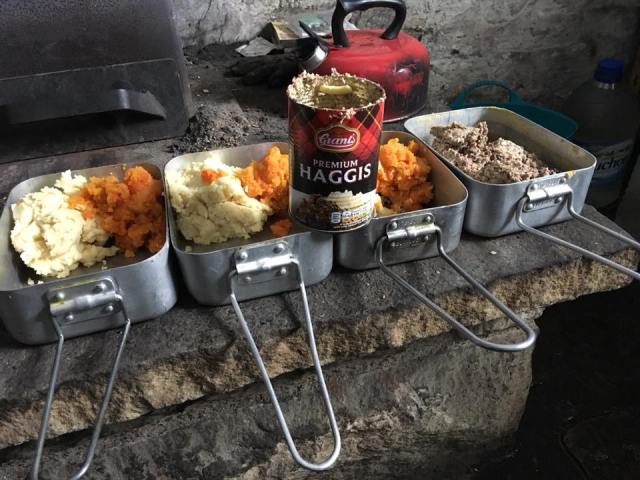 It soon became apparent that Kevin was much more than a medic or taxi driver – he had suggested holding an early Burns Night supper at Greg’s, with the traditional haggis, tatties and neeps (aka haggis, mashed potato and turnip) and sure enough that’s what he served.  The question has been asked, did we ‘toast’ the haggis with the vin de pays of Scotland (go figure it out!) – all we will say on the matter is ‘What happens at Greg’s Hut, stays at Greg’s Hut’. 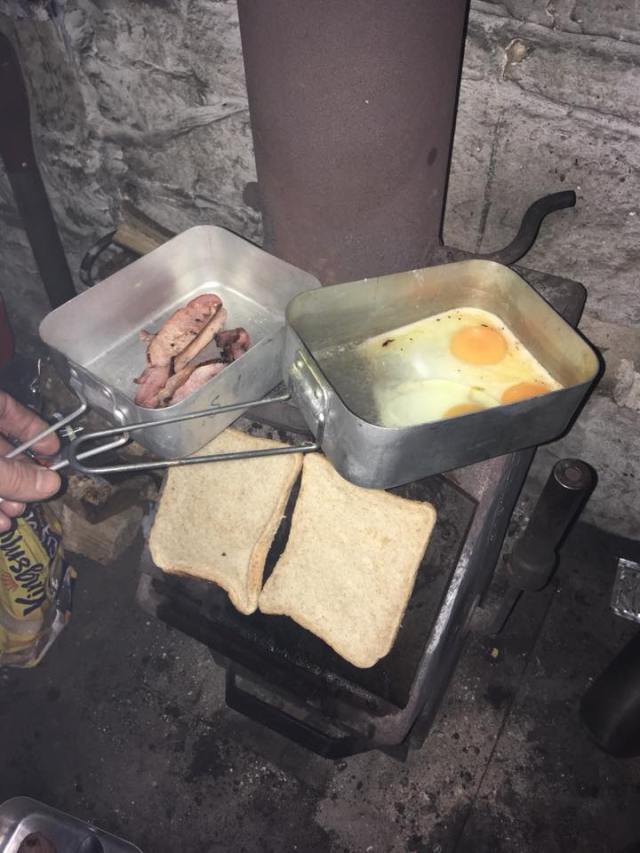 …. followed by a Full English the next day! 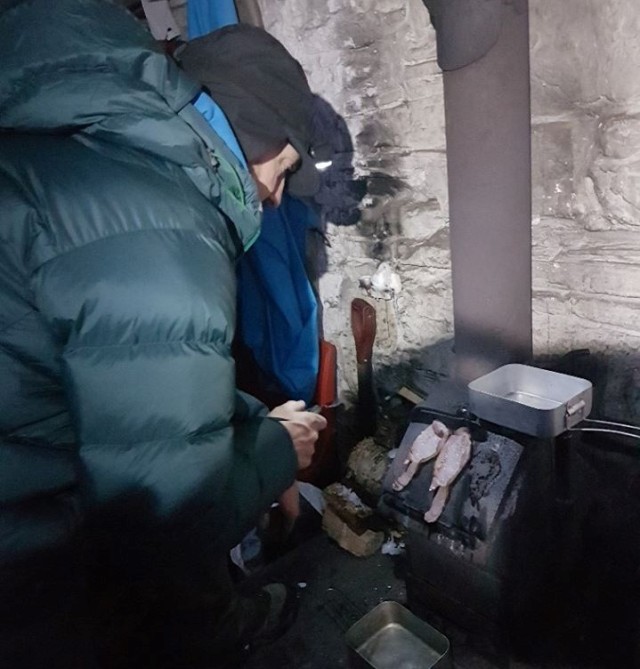 As if the Haggis supper (complete with recorded ceilidh music) hadn’t established Kevin’s reputation as one of the new legends of the winter edition of the Spine Race, the ‘Full English’ breakfast he cooked on the cast-iron hut stove confirmed it – Kev’s cooking certainly surpassed the dehydrated ration packs that we had been dining on.

‘Mist’ out for her daily walk 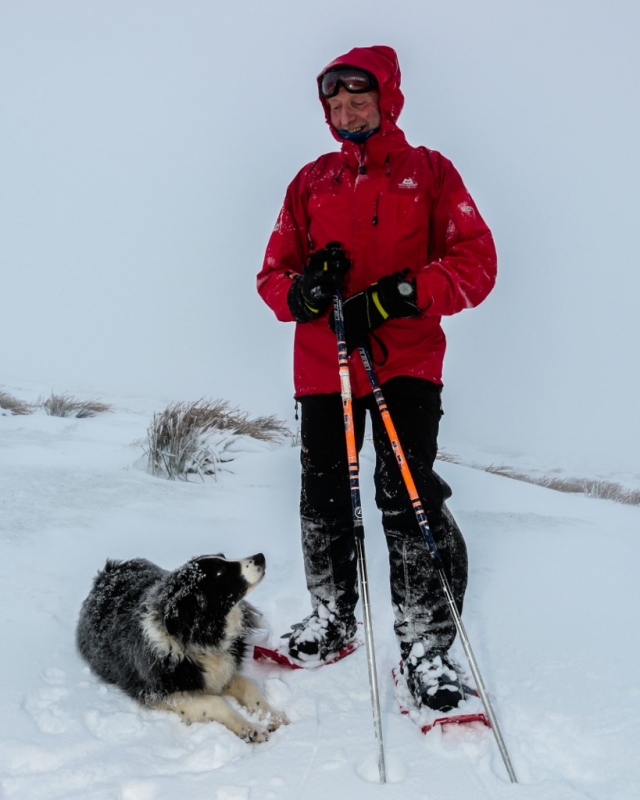 The author gets to use his snowshoes but wishes he had brought skis!

Just below the Cross Fell plateau 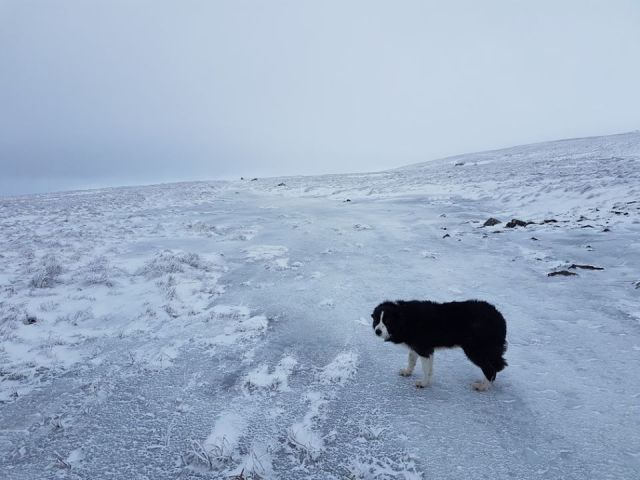 Very icy conditions before the big dump of snow

‘Mist’ running round in the snow like a puppy

All this good living could well have added a few inches to the waistline, but I always have the excuse of a dog walk for a little exercise.  The first trip out towards Cross Fell was very icy, where crampons would have been useful, but a huge dump of snow on the Wednesday left me wishing I had taken skis instead of snowshoes – ‘Mist’ loves the snow and charges round like a puppy, leaving me standing! 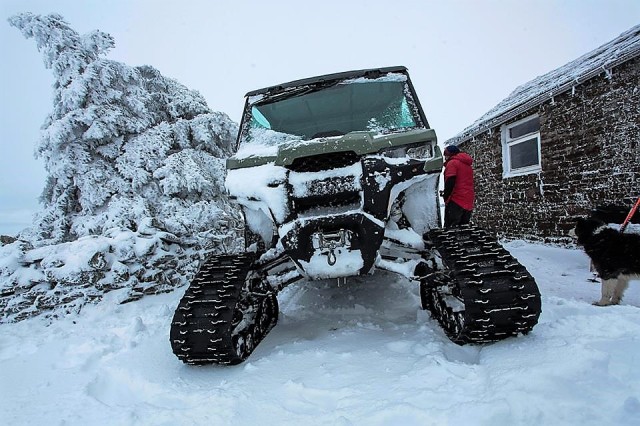 All good things come to an end.  When the final racer is through the CP, and our duties are complete, we have been known to swap a story or three by that cast-iron stove, accompanied by a wee drop of ‘Scottish Thinking Water’ (well, it helps me think!).  Then comes the problem of how to get back to civilisation.  For the past two years, Spine ‘sherpas’ have been dispatched to carry down gear, but this year we were going down in style. 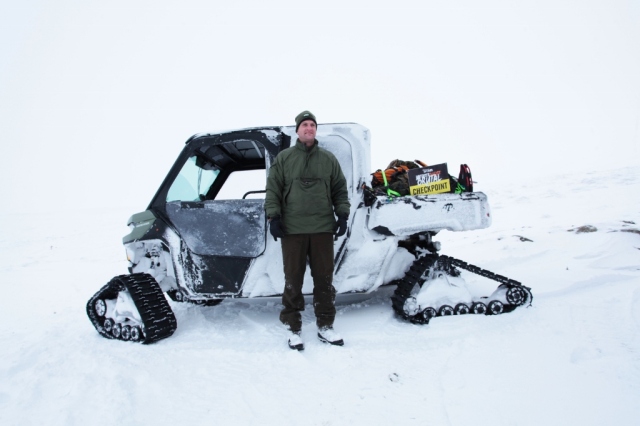 Alaister – a welcome sight for the Greg’s Hut team

The author admiring the packing!

Setting off for Garrigill ….

…. with the Border Collie in front as usual

Local gamekeeper Alaister is a kindred spirit with a climbing and skiing background.  He had visited us earlier in the week, and vowed that he would get us out, whatever the conditions.  True to his word, he turned up with a tracked vehicle that could carry all our kit, and (almost) all the Greg’s Hut team.  The cab looked as though it would have been a bit cosy with driver, three passengers and a dog, but ‘Mist’ needed a walk, so I was quick to volunteer to start walking down. 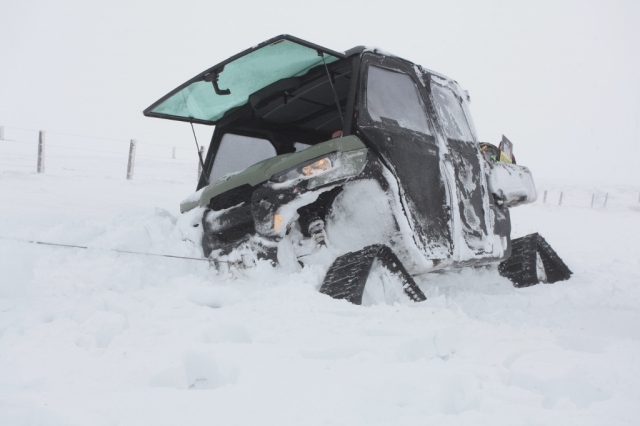 While I was having a great time snowshoeing down with ‘Mist’ (though still regretting not bringing along the skis!) the others had to dig the machine out of a snow-filled ditch on the way down – by the time Alaister came back to collect me and the dog, I had covered quite a bit of the return route, and I think I had the best of the deal.

The Spine Race – living up to the ‘Most Brutal’ tag line

Then the Spine Race 2018 was over for me, as I was heading straight back home to Wales, whilst John was heading for the finish line at Kirk Yetholme.  The race lived up to its ‘Most Brutal’ tag again in 2018, but the members of the Safety Team head back every year, just like the athletes, and the Greg’s Hut crew are already looking forward to next year’s fun, snow, haggis and tall-tales!

Looking forward to next year

I've been mucking about in the mountains for longer than I care to mention. I started out by walking my local hills, then went on to rock climbing, mountaineering and skiing. Still doing it, and still getting a buzz. I'm now sharing the fun, through my guided walking business (Hillcraft Guided Walking) and by writing routes for other publishers, mainly Walking World and Discovery Walking Guides. Just to make sure I keep really busy, I am also currently a member of my local mountain rescue team.
View all posts by Paul Shorrock →
This entry was posted in 4. Northern England and tagged Border Collie, mountains, Pennine Way, photography, snow, Spine race, winter. Bookmark the permalink.