‘A room with a view’ – Warnscale Bothy looking towards to Buttermere

The May 2018 trip to Scotland was drawing to a close.   Our outing to Invermallie Bothy and Achnacarry (see post #249) had been in damp, mizzly conditions, when the rest of the UK was basking in a heatwave that was to last into August.   It was time to bail out and head for the warmth, on the basis that Scotland is still going to be there next year. 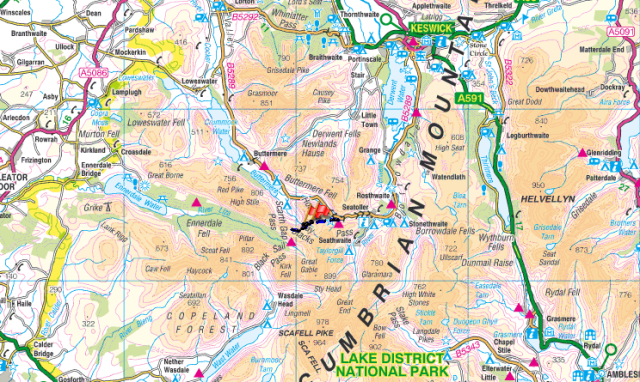 Bothy visits are a good hook to hang a walk off, so we headed to the North West corner of the Lake District where there are two bothies very close to each other (anyone still not sure what a bothy is, see my earlier blog from last year).   Two for the price of one seemed like a good deal, so Chris and I, plus Border Collie ‘Mist’ set out from Honister Pass on a hot, sunny day – summer had arrived early in the Lake District. 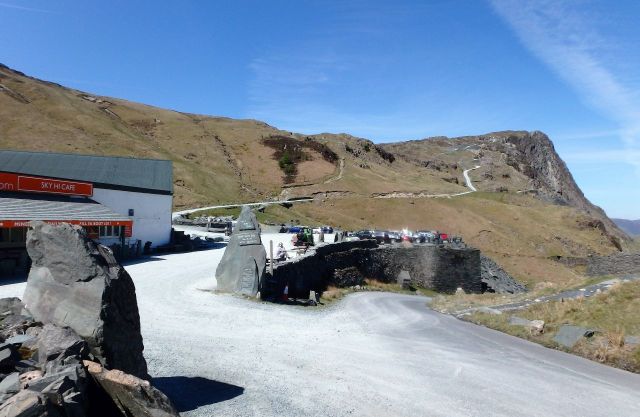 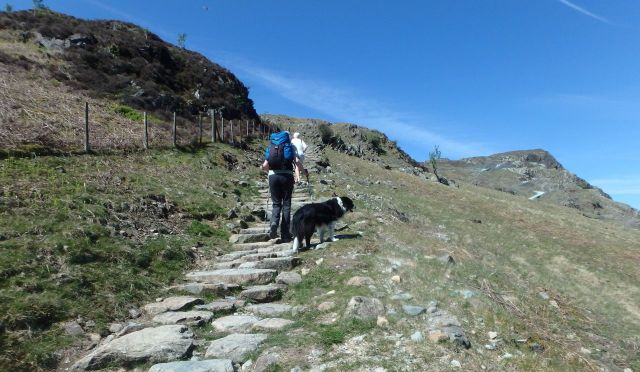 Setting out on the re-routed path from Honister 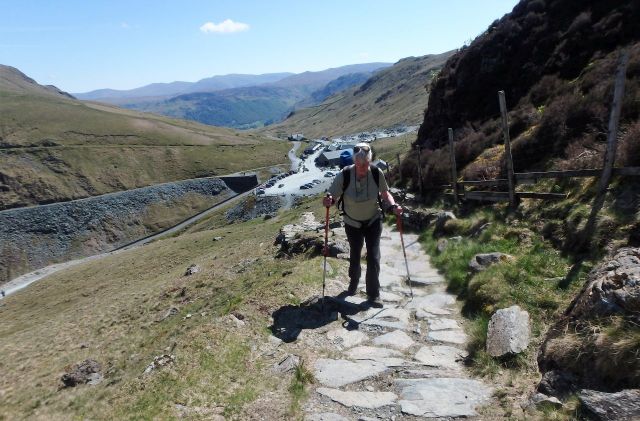 Looking back towards the visitor centre

Honister Pass is the site of a thriving quarry business.   It may seem strange to have a commercial quarry in a National Park, but the quarry was an important source of employment long before National Parks came into being.   The business was in decline until local man Mark Weir stepped in and the quarry is now a major visitor attraction, selling ornamental slate products – there is even a via ferrata in the disused quarry site.

On the old tramway ….

…. until the view suddenly opens up

We were heading for one of the old quarry sites that used to be part of the Honister operation.   The route out takes the line of an old tramway, which runs in a perfect straight line for over 1 km.   The initial section has been re-routed from the original way, as it had become dangerously loose over the years, but for the most part the tramway gives a solid and direct approach to Dubbs Quarry. 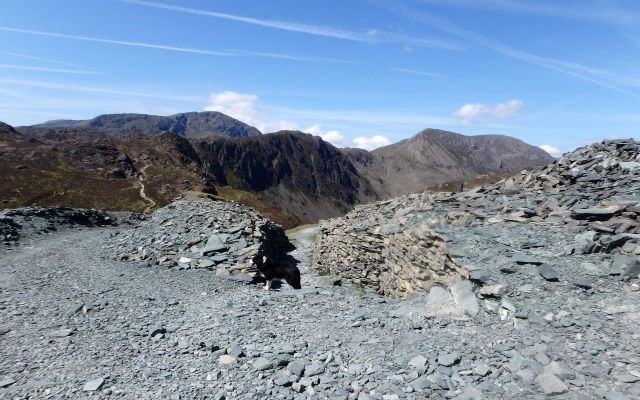 The approach to Dubbs Quarry

Dubbs Hut blending into the background (just left of centre)

Dubbs Hut was once one of the buildings serving the quarry, and following the business going into decline, it had become an informal shelter for walkers and mountaineers.    The hut had deteriorated quite badly over the years before coming under the care of the Mountain Bothies Association.    A spokesman for the MBA said, “When we first became involved, the building could best be described as soulless and unwelcoming with a roof that leaked heavily and with no fire or cooking facilities.”

Inside, showing the sleeping platform and stove 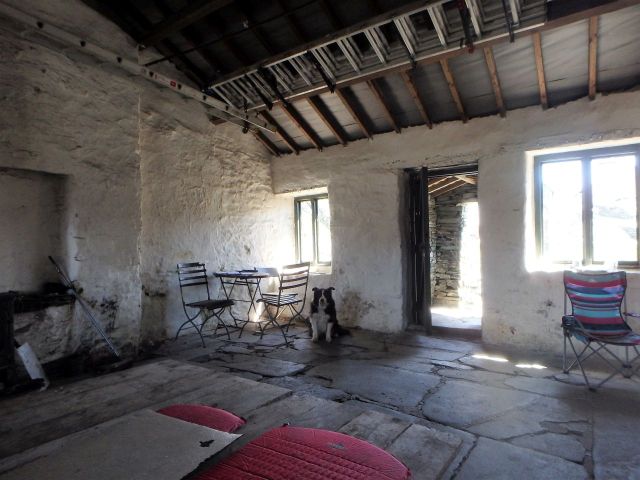 Looking towards the door

Dubbs Hut has a large single room equipped with a solid fuel stove and sleeping platform, and is spacious enough to accommodate a big party if the floor area is included.   We hadn’t come to stay the night, but we had a sit inside checking out the entries in the hut book before carrying on towards Haystacks and the Warnscale Bothy. 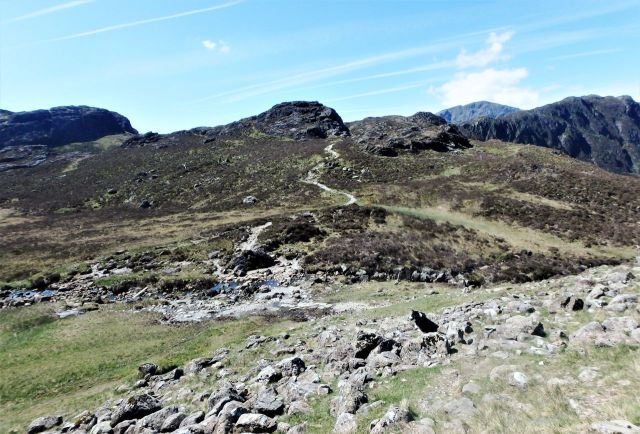 The path heading for Haystacks …. 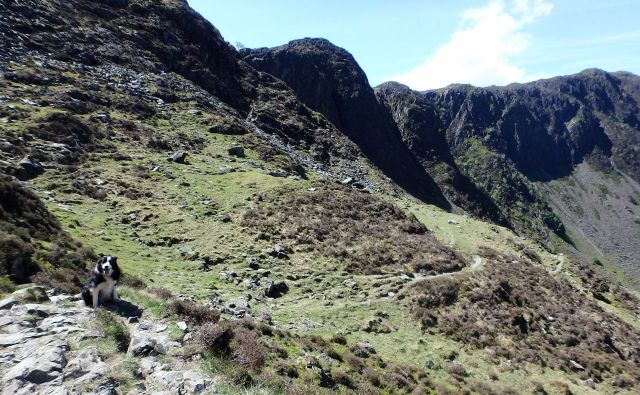 …. with the Warnscale Bothy path branching off 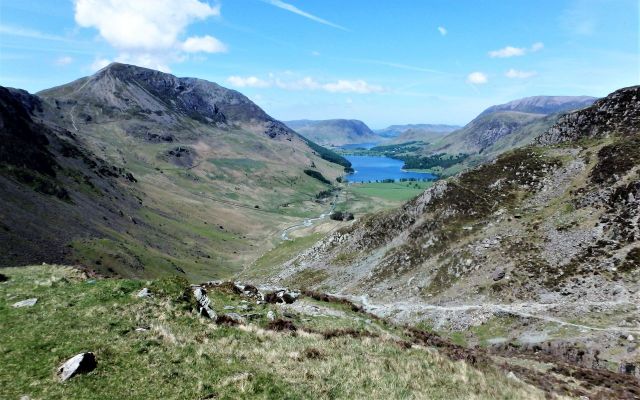 The view down to Buttermere from the Warnscale Bothy path 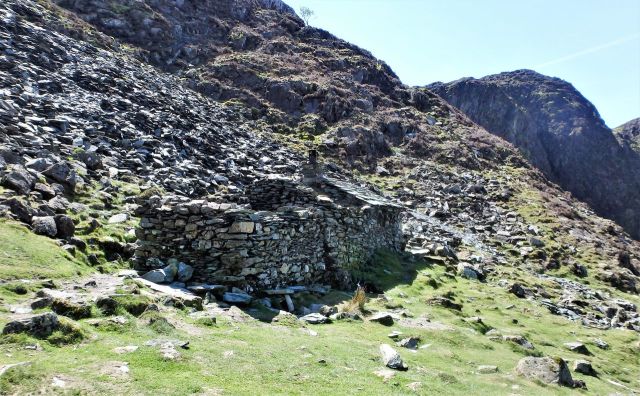 The path to Haystacks is well travelled and it would be hard, if not impossible, to get lost here.    The path out to Warnscale Bothy is nothing like as obvious, but we found it without any great difficulty.   When I say ‘we’, I’ve got to admit it was ‘Mist’ who found it first – she has a talent for finding paths, and once I have taught her how to use a map and compass, she will make a pretty good navigator. 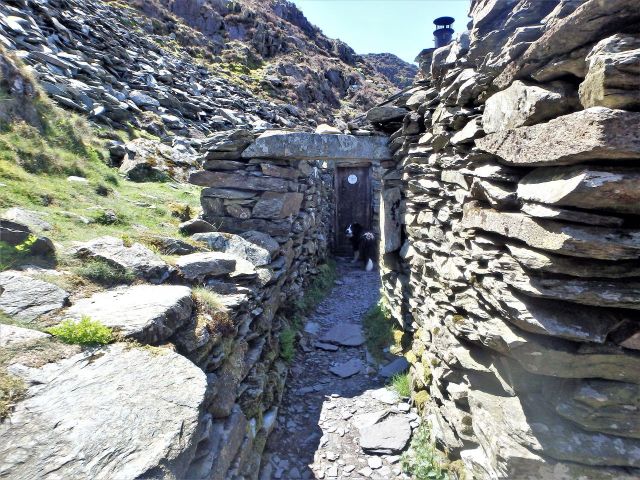 ‘A room with a view’ 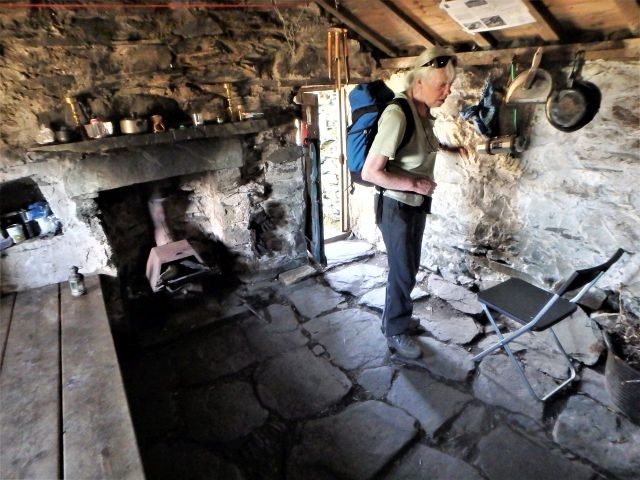 Much smaller than Dubbs Hut!

The views down to Buttermere from the bothy path were impressive, and our situation on the narrow path clinging to the hillside must have been equally impressive to people heading up the path from Buttermere.    After a false start (too high) we found the right way to the tiny building that is Warnscale Bothy – it’s known as the ‘room with a view’, for reasons that become obvious on arrival.

The bothy with Buttermere beyond 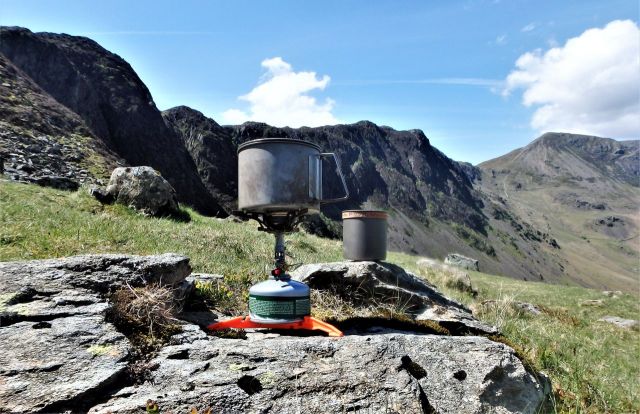 Tiny is a good description!    The MBA description on their website says ‘Not suitable for parties’ – four could probably squeeze in to sleep, but two or three would be a better number for comfort.   It’s cosy enough for sure, and with the stove going on a cold winter night, and a glass of whisky in hand, you would struggle to find a more atmospheric lodging. 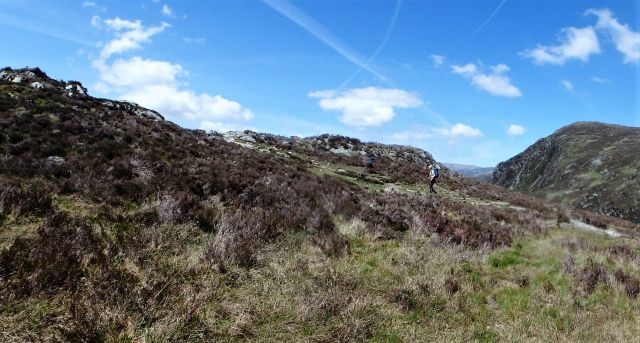 Setting out to Haystacks

We had a bite to eat and a brew of coffee, sitting outside the bothy on what was a hot and sunny spring day.    Another couple came to the bothy from below just as we were about to leave, so we left them in peace.   The day was a bit too warm for a long yomp, but that hadn’t been part of the plan anyway – we carried on to Haystacks, visiting Blackbeck Tarn on the way, before heading back to Dubbs.

From there a steady walk took us back down to the waiting camper van at Honister, with the usual cold cider for me and dinner for the ever hungry collie.

I've been mucking about in the mountains for longer than I care to mention. I started out by walking my local hills, then went on to rock climbing, mountaineering and skiing. Still doing it, and still getting a buzz. I'm now sharing the fun, through my guided walking business (Hillcraft Guided Walking) and by writing routes for other publishers, mainly Walking World and Discovery Walking Guides. Just to make sure I keep really busy, I am also currently a member of my local mountain rescue team.
View all posts by Paul Shorrock →
This entry was posted in 2. Lake District, Bothy days and tagged Border Collie, bothy, Cumbria, hillwalking, Lake District, mountains, photography. Bookmark the permalink.