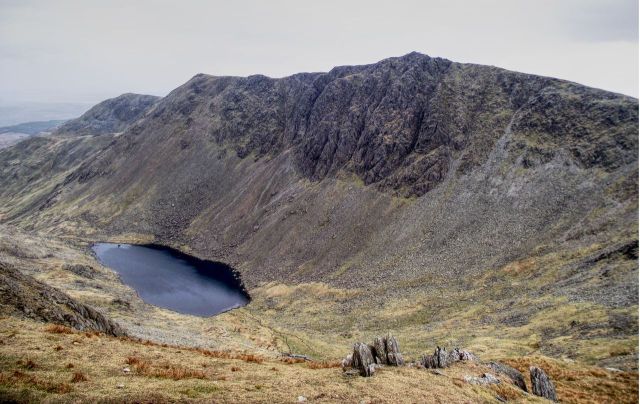 The Coniston Hills (on the left)

Over the years, I’ve frequently returned to the Coniston Hills in the Lake District.   I’ve posted a few of the more recent trips in this blog (see posts #179, #182 and #233) and have also had a couple of Coniston routes published in Walking World, both of which sold fairly well over the years.    So, you might have thought that by now I had covered all the route options.

Well, you might have thought wrong then, as there’s always somewhere left to explore, and in this case it was quite a significant omission.    Not far from the Coppermines Valley, there is a huge boulder on the way to Levers Water called the Pudding Stone – rock climbers have been climbing on this for well over 100 years, and in 1916 a climbing guidebook was written to this and other big boulders in the area. 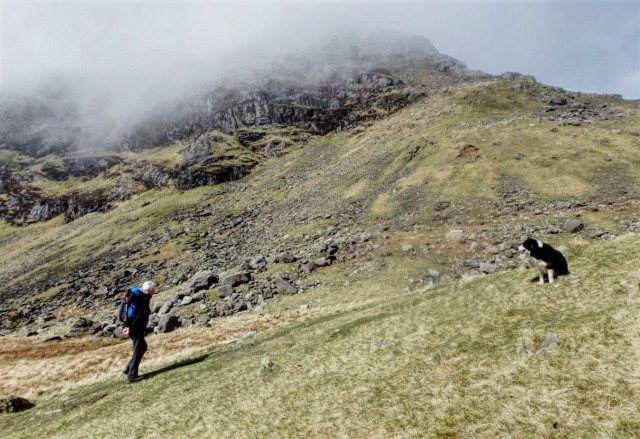 Beyond the Pudding Stone is Boulder Valley, and the area is now an important addition to the rock-climbing sport of bouldering, with routes of all grades, from easy, through difficult to virtually impossible.   Boulder Valley is also a great walk out in its own right, and eventually the valley path leads out to the quiet Levers Water.    I had never been out this way, so in April 2018 Chris and I, plus Border Collie ‘Mist’ of course, decided to go and explore.

The steps up to Levers Hawse

Heading away from Levers Water

Border Collie ‘Mist’ waiting for the humans, as usual

…. but not there yet

Just below the ridge at Levers Hawse 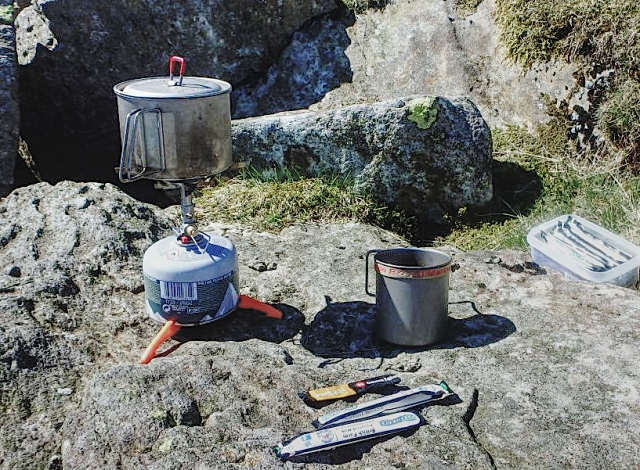 Time for a brew!

The map shows a path winding steeply up the hillside to the col at Levers Hawse – at one time it could well have been an earthy scramble up Gill Cove, but the path is now a neat set of steps that have blended well into their surroundings.    We made rapid progress, but it soon became obvious that there was a cool wind blowing over the wide ridge between Coniston Old Man and Swirl How, so we took the opportunity to grab a brew and a bite to eat before heading on.

Emerging on to the ridge, with Swirl How in the background

Heading south towards the Old Man

Rare photo of the author and ‘Mist’

Out on the ridge there was a stiff breeze, and it was time to get another layer on.    It might have been cool, but the views were fantastic as often happens in cooler weather, so it was photo time.    I even ended up in a photo myself, which is a rare happening – look at the pic and you will see why I’m happier to be on the other end of the camera. 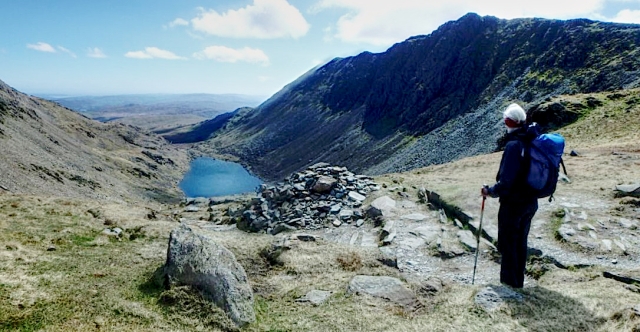 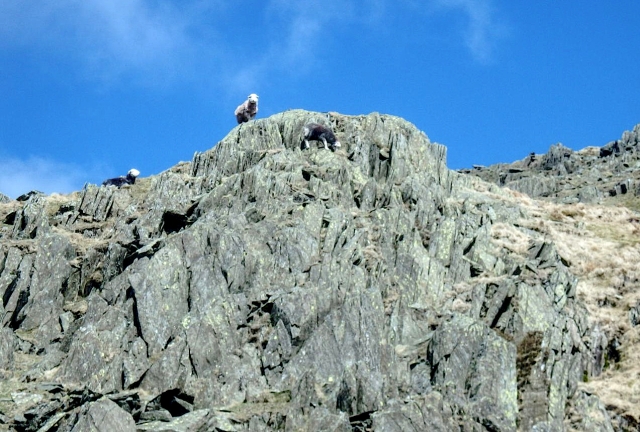 OK, confession time, we didn’t actually top the summit of the Old Man – we’ve both been there before and it doesn’t change much.   Instead, we took the shortcut path to Goats Hawse and headed down to Goats Water.   Unlike North Wales, there aren’t any goats now, or if there are they must be good at hiding!  We did see a bunch of rock climbing sheep though.

Start of the descent to Goats Water

On the east shore of Goats Water

We soon reached the shore of Goats Water, with a steady walk out in front of us across the moor to the Walna Scar Road.  The Levers Water path to Levers Hawse turned out to be a little gem – watch out for a return visit.

Crossing the moor – time to head for home

I've been mucking about in the mountains for longer than I care to mention. I started out by walking my local hills, then went on to rock climbing, mountaineering and skiing. Still doing it, and still getting a buzz. I'm now sharing the fun, through my guided walking business (Hillcraft Guided Walking) and by writing routes for other publishers, mainly Walking World and Discovery Walking Guides. Just to make sure I keep really busy, I am also currently a member of my local mountain rescue team.
View all posts by Paul Shorrock →
This entry was posted in 2. Lake District and tagged Border Collie, Cumbria, hiking, hillwalking, Lake District, mountains, photography. Bookmark the permalink.
Loading Comments...
%d bloggers like this: