Back in 2009, I was looking for a new project.  A couple of years earlier I had started writing hiking routes for WalkingWorld and had a great time doing it.  In fact, it soon became obvious that there some plum routes that hadn’t been covered, including Sharp Edge on Blencathra, the North Ridge of Tryfan, the Aonach Eagach in Glencoe and the Carn Mor Dearg Arete on Ben Nevis – I had a busy time writing up some of the best mountain walks in the UK for the best UK route provider.    There was plenty to go at then! 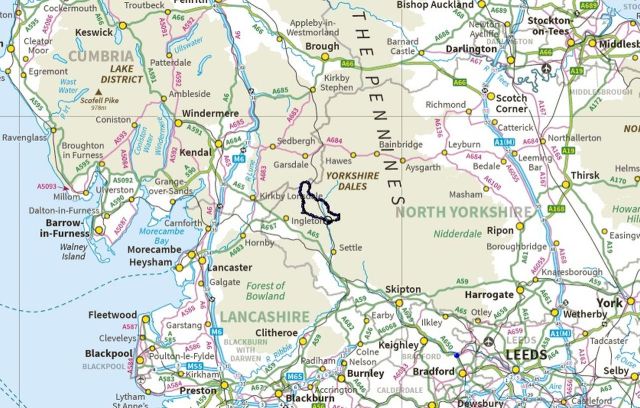 Despite the fun trips for WalkingWorld, I fancied something more involved, something like a guidebook in fact.   I put out feelers to a couple of publishers and received a reply from Discovery Walking Guides – they had already published a guide to the National Three Peaks Challenge (Snowdon, Scafell Pike and Ben Nevis in 24 hours) but didn’t have the Yorkshire Three Peaks (Y3P) Challenge walk in their titles.   Would I like to submit a proposal?   Would I?   I should say so!

The Three Peaks and the Challenge route

The Y3P is about 24 miles in length, with a total height gain of about 1585 metres.    Most walkers start at Horton-in-Ribblesdale and go anti-clockwise, taking in Pen y Ghent followed by Whernside then Ingleborough before returning to Horton – in other words, the equivalent of a good mountain day in the Scottish Highlands.   The ‘Challenge’ is to complete the walk in under 12 hours, which is hard enough to be challenging but easy enough to be possible. 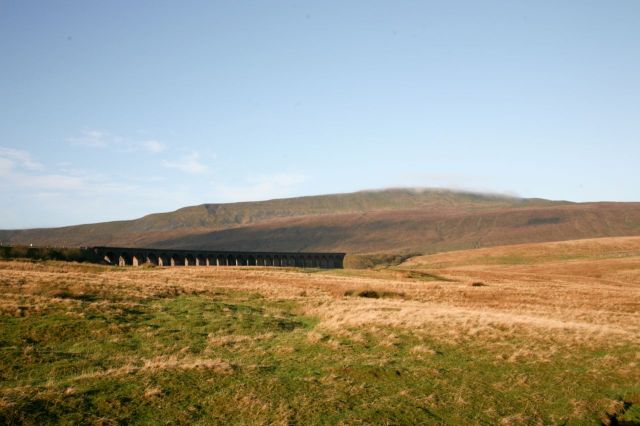 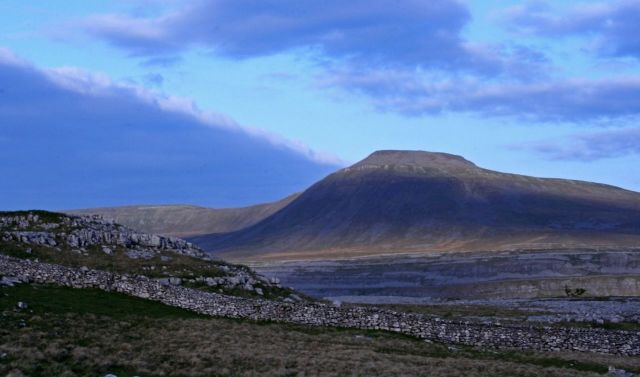 A dusting of snow on Pen y Ghent

It is believed that the origins of the Challenge go back to 1887 when two teachers from Giggleswick School went for a walk over Ingleborough.   They were having such a good time that they carried on over Whernside and Pen y Ghent.   Ten years later, four members of the Yorkshire Ramblers set a record of 10½ hours to complete the Three Peaks.  The present record for fell-runners is an incredible 2¾ hours! 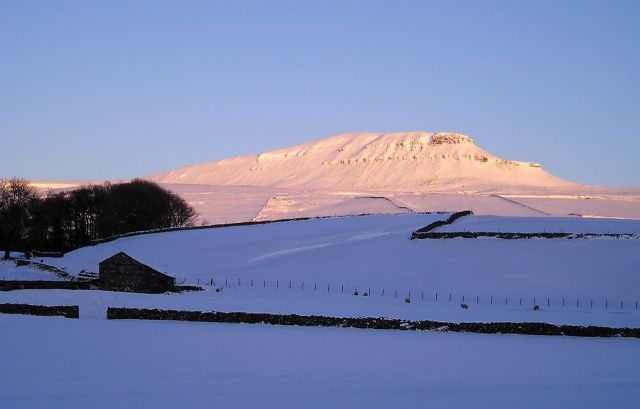 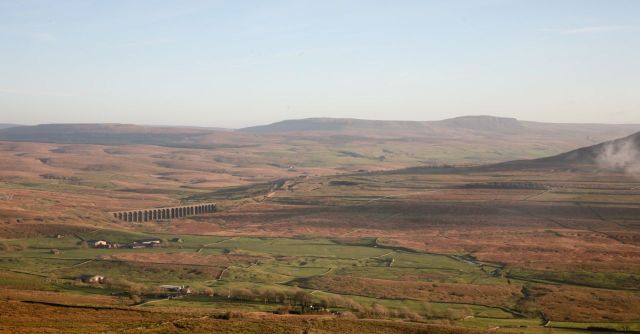 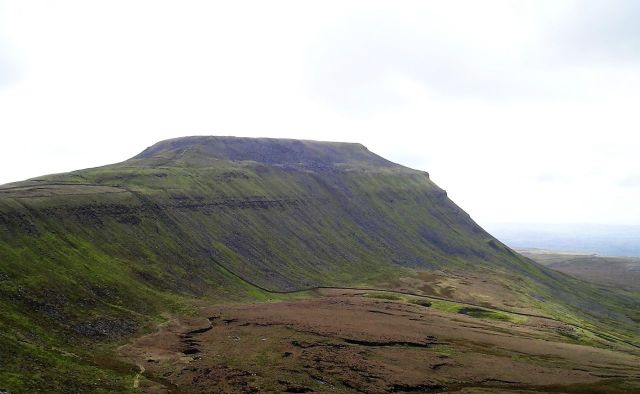 Just a few weeks before Discovery Walking Guides expressed their interest in the Y3P as a title, I had completed a round of the route with an old friend from my time in the Royal Marines.    I hadn’t seen Kim since we finished training in 1975 – I had left the Corps five years later in 1980 as a lowly lieutenant, but he had completed a full career engagement, retiring as a major. 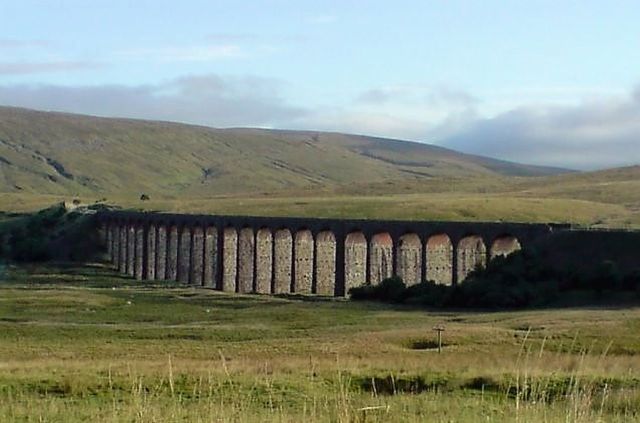 …. and early morning mist on Ingleborough

Kim on the summit of Whernside 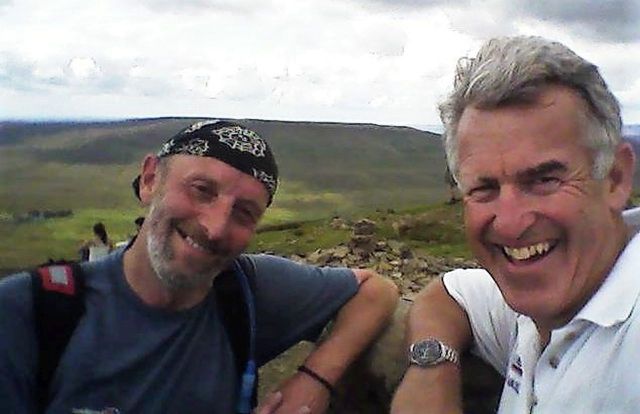 The author and Kim on Ingleborough

The last one! Pen y Ghent 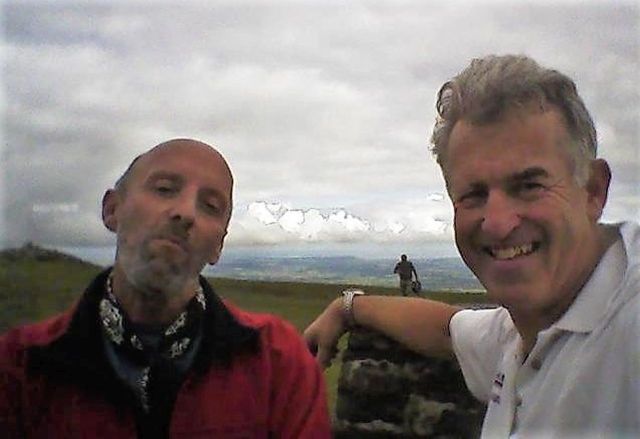 We did the 23-mile walk without any prior preparation other than caching some water at the road crossing points.    With a combined age of 110, a finishing time of just under 9 hours was a fairly good result.  I had suggested the unconventional start point of Ribblehead, taking Whernside first then Ingleborough followed by Pen y Ghent.    The only low point of the day was following the original route over Todber Moss and Red Moss – in Yorkshire, ‘Moss’ usually translates as bog!   I decided at that point not to repeat that bit of the Y3P experience ever again.

My first ever trip up one of the Peaks had been much earlier in Spring 1969, when a bunch of us from the Air cadets went up Ingleborough.   The photo on the summit (see above) shows some gnarly looking clouds in the background – about twenty minutes later we were wrapped up in a maelstrom of snow and wind, and after walking around the plateau to find the way off, we realised that we were back at our start point.   Fortunately, it stopped snowing and blowing after half-hour and we escaped, passing hikers in t-shirts and shorts on the way down, on what turned into a warm sunny day. 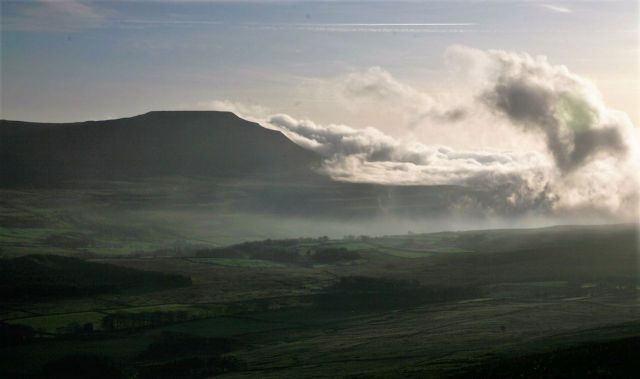 Soon after that, I completed the full Challenge route for the first time, with some mates doing their Duke of Edinburgh’s Award expedition.    We took three days, with rucksacks weighing about 15 kgs (over 30 lbs) – tents and stoves were a bit heavier back then!   Then, in the 1980’s I ran the Challenge route with my dog in under six hours – I was caught by the bogs of Todber Moss on that trip as well!

As well as previously completing the challenge route more than once, I had also walked each of the three peaks individually several times, and on one occasion I had even skied most of the way up Pen y Ghent before ‘bailing out’ due to avalanche conditions, so you could say I knew the ground fairly well – what I didn’t know was how to go about writing a guidebook….

2009 – The author on the Whernside ridge, looking towards Ingleborough (JB)

What I needed was a plan.   (To be continued)

I've been mucking about in the mountains for longer than I care to mention. I started out by walking my local hills, then went on to rock climbing, mountaineering and skiing. Still doing it, and still getting a buzz. I'm now sharing the fun, through my guided walking business (Hillcraft Guided Walking) and by writing routes for other publishers, mainly Walking World and Discovery Walking Guides. Just to make sure I keep really busy, I am also currently a member of my local mountain rescue team.
View all posts by Paul Shorrock →
This entry was posted in 3. Yorkshire Dales and tagged Border Collie, Discovery Walking Guides, hiking, hillwalking, Ingleborough, mountains, Pen y Ghent, photography, Three Peaks Challenge, Whernside, Yorkshire. Bookmark the permalink.