Ingleborough in the distance, seen from Whernside (JB)

My first trip out recording the Y3P Challenge walk (see post #271) had been a bit, err …. damp!   Gore-Tex jacket and salopettes were dried within a day but it was a couple of days before I had completely dried out my (supposedly) weatherproof camera.   Still, there was no point in waiting around for a heatwave, so two weeks later I met John Bamber at Ribblehead to have a go at Route 5 – the weather was still a bit ‘iffy’ though! 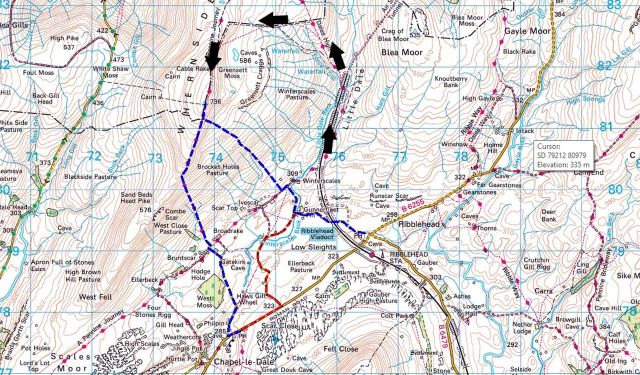 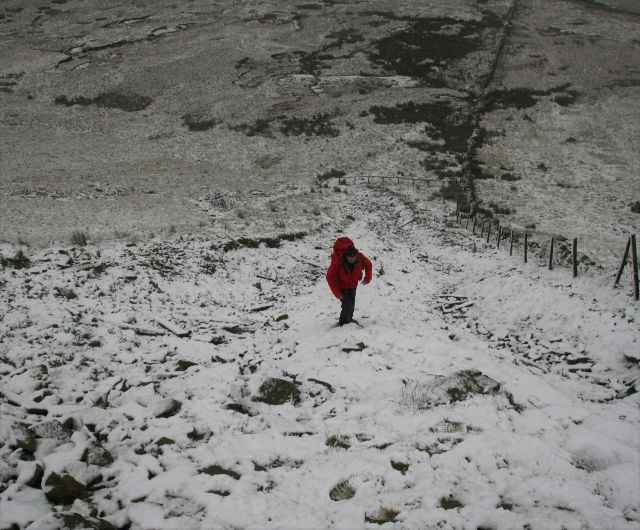 Yep, this was going to be Whernside the steep way!    Route 5 was a more direct version of Route 2, which was completed a week later (see below).    (The fact that the routes were not in numerical order didn’t matter at this point – that would be sorted out later.)    Apart from being a longer trip, Route 5 followed the course of the Whernside section of the Challenge Walk – well, almost.   The ‘official’ route round the Y3P follows the black arrows on the map above, but I had a cunning plan!

John setting out from Ribblehead in ‘less than perfect’ conditions

The route the runners take on the annual Y3P Fell Race takes a direct line up the hillside near Winterscales Farm – it’s short and brutal but much faster if you’re running it.   I reckoned that even at walking pace, the ‘direct’ route could cut about 20 minutes off the time to the summit, and when we returned a week later, I was to be proved right.   John and I might have made an even faster ascent if it hadn’t been for the snow! 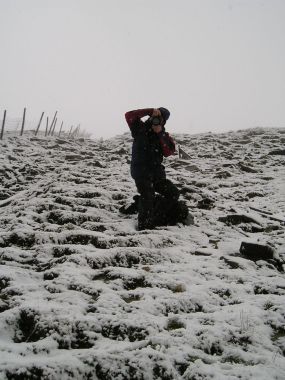 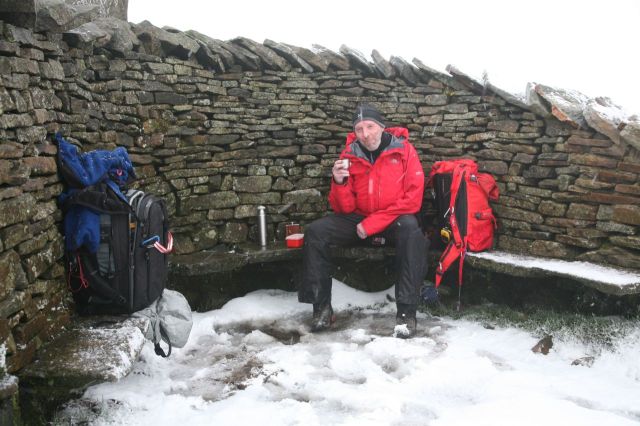 Brew time!  The author ‘chilling out’ at the summit shelter (JB)

Yes, our steep and uncompromising route up the side of the fell had a covering of wet, claggy snow, which didn’t add anything to the concept of a speedy ascent.    We both added extra photos to the growing portfolio of Y3P shots, John with a couple of Canons, me with my Olympus Tough camera, newly dried out from the Ingleborough trip two weeks earlier.    As we finally slithered to the summit, a brew of coffee seemed like a good idea. 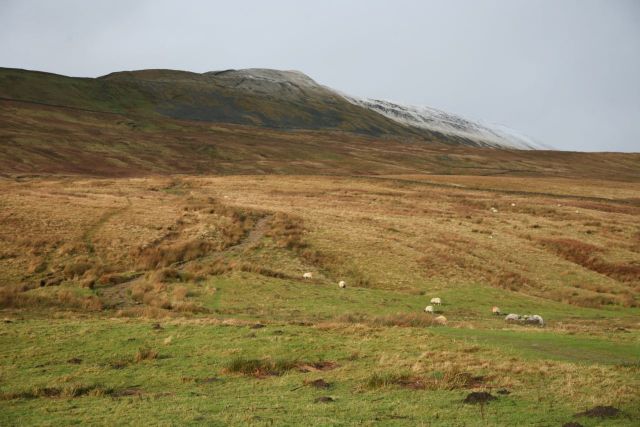 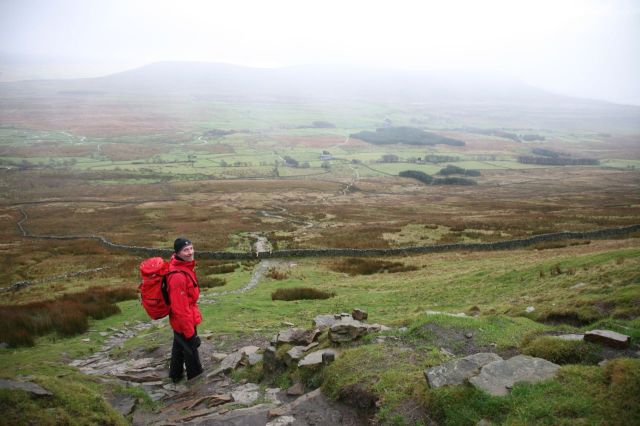 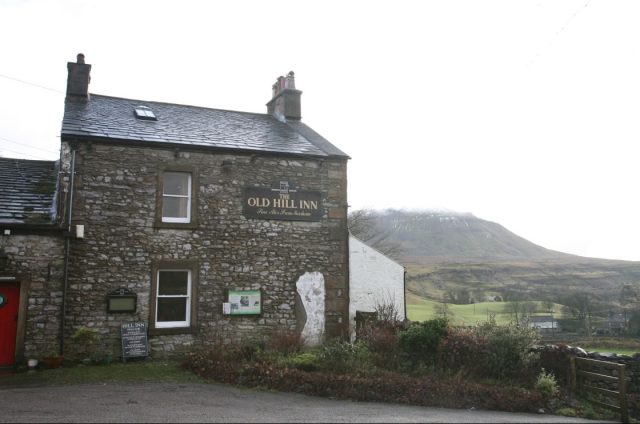 …. where there just happened to be a handy pub! (JB)

Well, it would have been rude not to have called in! (JB)

On the way down, the day began to brighten and it seemed that the early snow conditions wouldn’t last long.   Sure enough, as we headed down to Chapel le Dale, the snow was starting to thaw and as we reached the road it was good to know that another GPS Track Log was in the bag.    That deserved a small celebration, and the Hill Inn was open – well, it would have been rude not to have called in!

Almost back to the car – and the sun came out! (JB)

The route back to the car avoided the road by following the farm lane by Winterscales Beck to Gunnerfleet Farm, a longer walk than following the main road but much quieter with no traffic, an important consideration for hikers following the route in summer.   As if to have a laugh at our expense, the sun came out as we arrived back at Ribblehead. 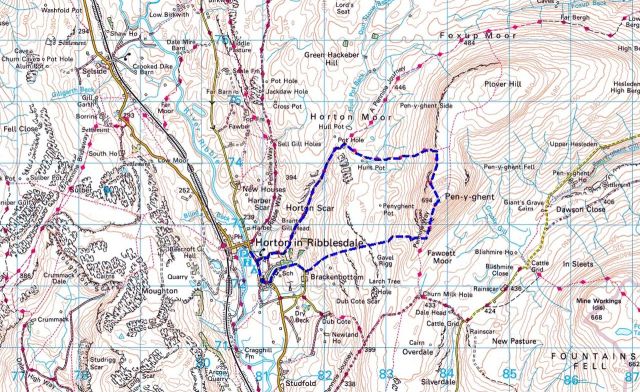 Two days later I was back in the Yorkshire Dales again, this time with Chris.   Once again the day was dank and dull with no prospects of getting decent photos, so another GPS Track Log would have to do instead.   It was no hardship to do this walk though, as it’s my favourite Yorkshire Dales route.

Rock step on the South Ridge

Things ‘faired up’ on the way back

It was cool and misty up to the summit, where things took a sudden change, and we were reminded that Pen y Ghent means “Hill of the Winds”.   The mist disappeared, but the wind was what is known in Yorkshire as “a lazy wind” – it can’t be bothered going round you, so it goes straight through you!   The descent route was icy, required extra care, but on the way down the weather ‘faired up’ a bit, as we say in the North of England. 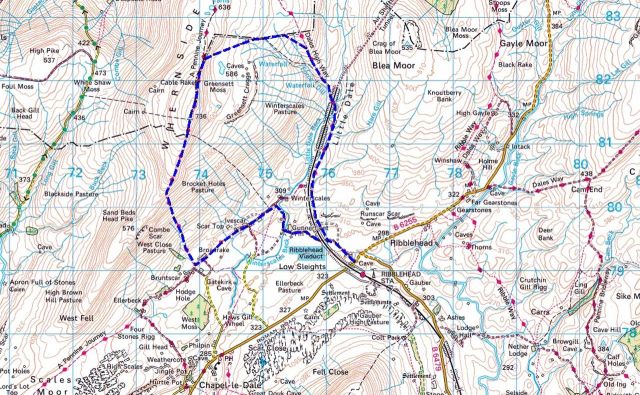 On the approach, with a bit of cloud lingering on Whernside (JB)

A week after the first Whernside walk with John, we were back again, and with the full team of Chris, John and me.  This time it was the Whernside ‘pretty’ route, which would be a good introduction to guidebook readers who had never seen the hill before, and a much gentler ascent than the brutal runners route that John and I had followed a week earlier.

A bit of stream hopping (JB) 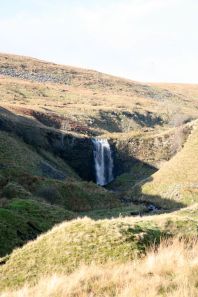 At last we had a sunny day with blue skies, so decent photographs were a possibility.   Sure enough, the lower part of the walk was in the sun, with John clicking away like a man possessed, but as we reached the summit ridge, we were in the mist again.   No point in summit photos then!

The author and Chris, nearly at the top …. (JB) 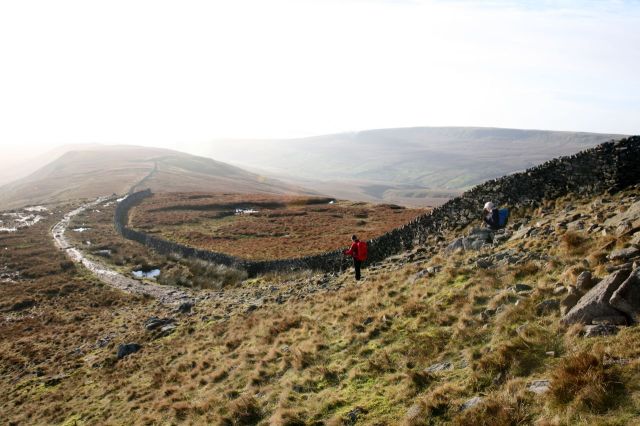 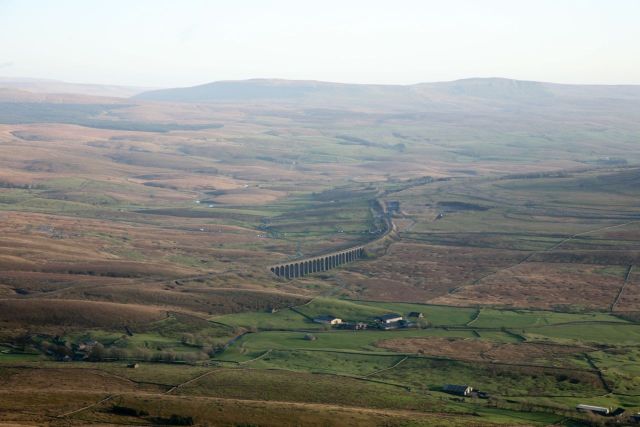 Looking down to Ribblehead and the railway viaduct (JB) 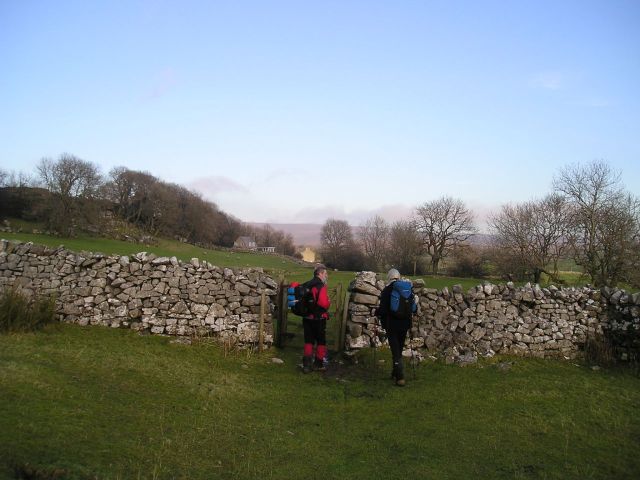 Back in the valley …. 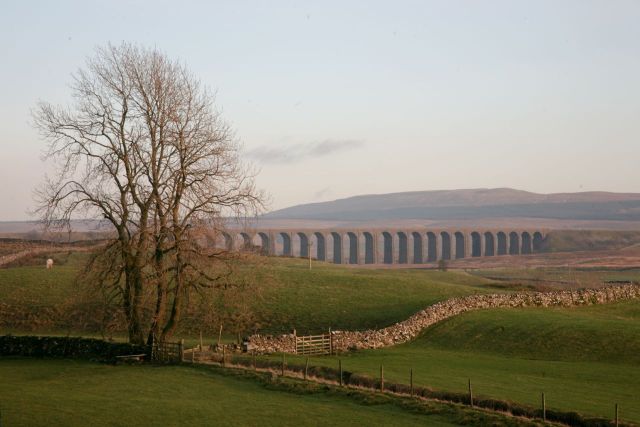 We reached the top and carried on down the other side, following part of the route that John and I had taken a week earlier.    The day was drawing on, so the shorter route back to Ribblehead by the old bridleway was the best option.   As we arrived back at the start point, the light was starting to go, but the day had been the best so far.

Catching the last of the light …. (JB)

That was four of the six routes completed, three within the space of a week.  The main challenge remaining was finding a solution to Route 4 that avoided the bogs of Todber Moss, but with Christmas fast approaching it looked as though that wouldn’t happen until the New Year.

I've been mucking about in the mountains for longer than I care to mention. I started out by walking my local hills, then went on to rock climbing, mountaineering and skiing. Still doing it, and still getting a buzz. I'm now sharing the fun, through my guided walking business (Hillcraft Guided Walking) and by writing routes for other publishers, mainly Walking World and Discovery Walking Guides. Just to make sure I keep really busy, I am also currently a member of my local mountain rescue team.
View all posts by Paul Shorrock →
This entry was posted in 3. Yorkshire Dales and tagged Border Collie, Discovery Walking Guides, hiking, hillwalking, Ingleborough, mountains, Pen y Ghent, Pennine Way, photography, Three Peaks Challenge, Whernside. Bookmark the permalink.