(For the best viewing experience, left-click the images and maps to zoom in, then use your browser return arrow to go back)

Moel y Parc, on the northern end of the Clwydian Hills

June in North Wales, and we were still restricted to five miles travel for recreation and exercise, whilst over the border in England the lock-down had been lifted for hiking and hill-walking. After three months of restricted travel, even our local sections of the Offa’s Dyke Path (see post #275) were starting to lose their glamour – a trip out was needed.

A ‘creative’ approach to what constituted five miles travel brought the village of Bodfari in range – just about! That set us up for a tidy little walk up Moel y Parc (Bare Hill of the Park). At 395 metres (1099 ft) altitude, Moel y Parc isn’t going to win many prizes for height, but the hill is famous for one special feature – a TV transmitting station with a mast 235 metres (771 ft) high, which is the tallest structure in Wales. 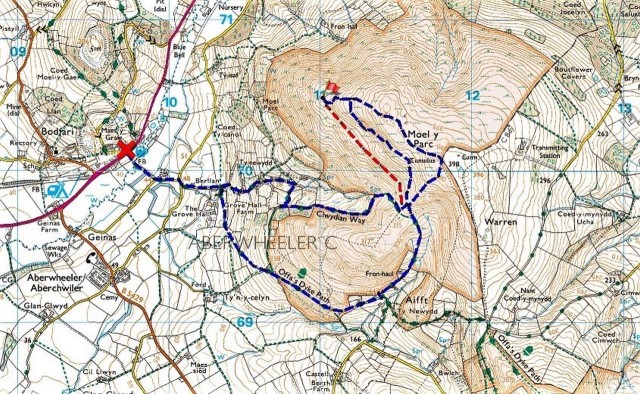 Close up view of the route – actual route in blue, where we should have been in red!

Taking a walk to visit a TV mast seemed to lack a little imagination, but there was another attraction, well for me anyway. Less than 1 km from the summit lies ‘The Loneliest Cairn’ in the Clwydian Hills. How do I know this? Because ‘Hoppy’ told me! More of Hoppy later.

Interesting root system on the tree

Border Collie ‘Mist’ keen to be moving on ….

…. but there’s time for a quick look out towards Bodfari in the valley below

Bodfari was baking in 27° C, but leafy lanes kept us cool as we started gaining height, pausing on the way to admire the wackiest looking tree I’ve seen in a long time, with exposed roots as long as the tree trunk, and the whole thing lying over at a crazy angle. That might have interested me but didn’t seem to impress Border Collie ‘Mist’ any more than the view down to Bodfari, initially obstructed by trees.

Out of the trees at last …. 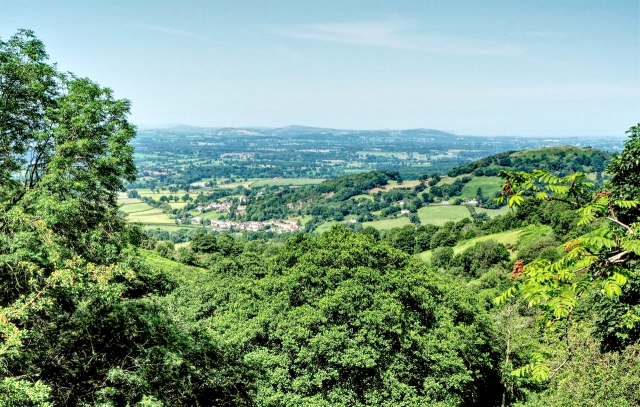 …. and better views down to the valley ….

…. with Bodfari far behind now

Then, at last, we got above the tree line, giving us better views to Bodfari and Dyffryn Clwyd (The Vale of Clwyd). Before long, we were at a post marking a col below Moel y Parc where a decision would have to be made. We were looking for sheeptracks and the loneliest cairn in the Clwydians. 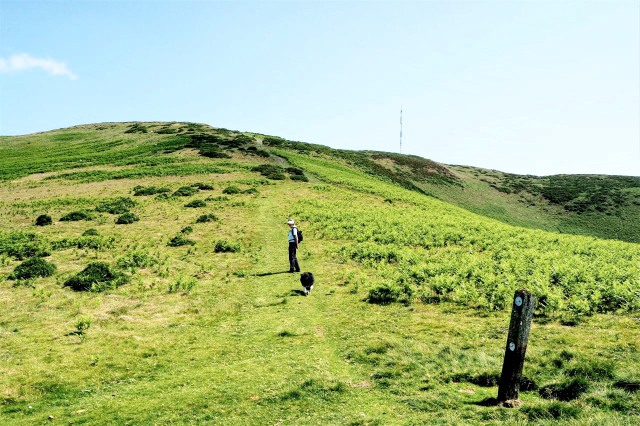 Setting off upwards, looking for Sheeptracks

Time to bring ‘Hoppy’ in to the story. Hoppy is one of the ‘characters’ of the local mountain rescue team that I’m a member of (NEWSAR) and is known to one and all for his unique wit and sense of humour 😉 . Another of his claims to fame is that he is the brains behind several fell races in the Clwydian Hills, all of which help to raise funds for NEWSAR. 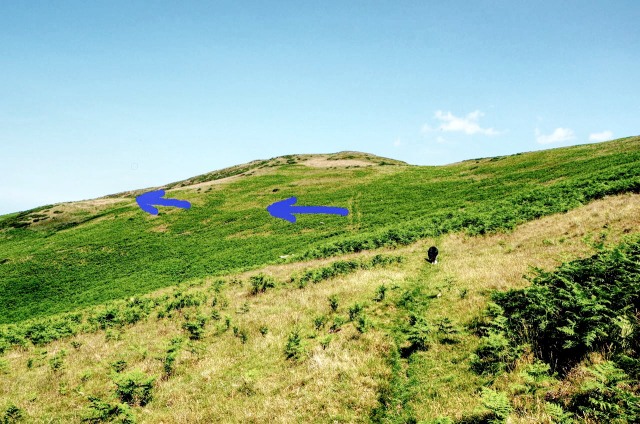 Following the high sheeptrack towards the Lonely Cairn

The highlight of Hoppy’s fell-running events is known as ‘Sheeptracks’. The race is 27-30 kms in length, with a new course every year, and consists of a series of checkpoints, with the aim being to navigate (and run!) between the CPs without getting lost! The race gets its name after the many sheep tracks on the Clwydian Hills, and the course is devised to make the best use of the tracks linking the CPs.

Adrift – in a green sea

Hoppy had told me of a cairn that sits on the northwest shoulder of Moel y Parc, which few people know about and which is probably the loneliest cairn in the Clwydian Range. He also showed me on the map the rough line of a sheeptrack that heads straight for the cairn – all in all, it looked like a good hook to hang the walk on.

The view down to Dyffryn Clwyd (the Vale of Clwyd)

As we set off from the col, I had a rough idea where Hoppy’s route went, but there seemed to be a better-defined sheeptrack following a higher line and avoiding a green sea of newly grown bracken. So, we took the high road, avoided the bracken …. and ended up on steeper ground with prickly gorse bushes – neither Chris nor ‘Mist’ seemed to be much impressed! 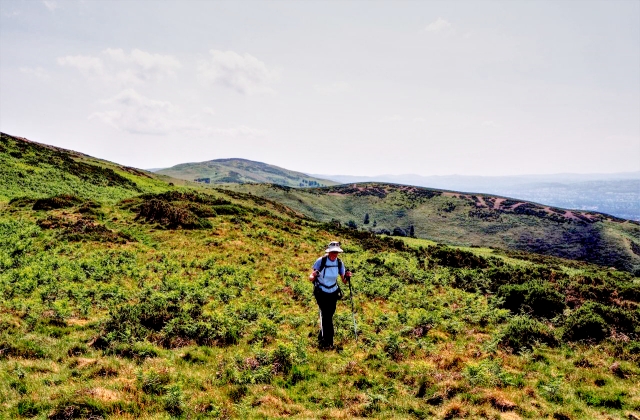 Out of the bracken at last

In the end, I managed to navigate us back into the green sea of bracken and on to the correct sheeptrack – that’s after slithering down the steep slope we shouldn’t have been on in the first place. It appears that I should have listened more closely to what Hoppy had to say.

Hoppy, what a smart-arse!

The Lonely Cairn – at last!

Before long, we were on course to the Lonely Cairn, where it was time for a break. It’s worth pointing out that the Sheeptracks Race takes place in February when the bracken is low and there’s no need for bushwhacking through waist-high vegetation.

Hoppy, Oh what fun we had!

Lunch break – and a sunshade for ‘Mist’

There was no shade from the sun at the cairn, so I rigged up a bit of shelter for ‘Mist’ using trekking poles and a jacket. She tolerates hot days in the hills very well (see post #137) but I make a point of giving her breaks from the heat when possible. She will also drink on my request, and it’s easy to keep her hydrated – when she stops drinking, I know that she is well topped up!

After the break, it was more uphill, heading for the summit of Moel y Parc. At the top I had a play with the new toy, an ultra-wide zoom lens for my Olympus OM-D camera.

Standard zoom lens, this frame equivalent to 28mm in a full-frame camera

The new lens is the equivalent of 18-36mm in full-frame, which is wide by any standard, and I was able to include the TV mast along with the main Clwydian Ridge – the two images directly above show the difference. Photographers out there might expect verticals to lean over a bit with a lens this wide, but with the wonders of ‘Keystone’ correction in digital editing, I was able to get the mast perpendicular without any undue distortion – the two images above show the difference between ultra-wide and a more conventional wide. 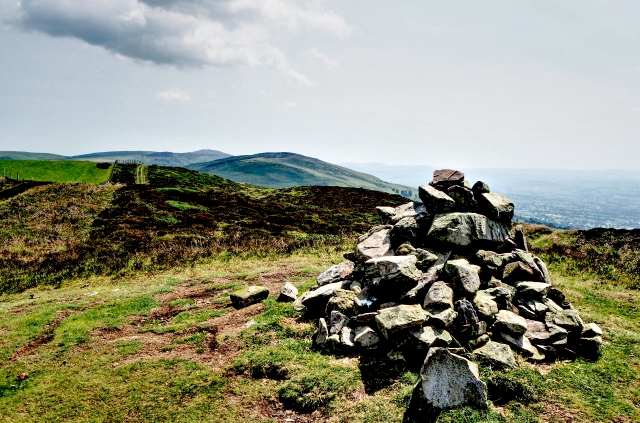 ….with a bit more of the Offa’s Dyke Path

Then it was time to head down to Bodfari, picking up another section of the Offa’s Dyke Path on the way – it’s a section that we have done before, but as it was heading back to the car it was in the right place at the right time. ‘Mist’ was still well hydrated and ignored a couple of springs on the way down, but she did settle for a paddle in the stream when we got back to Bodfari. Then it was back into a hot car and home for the best time in the day for the dog – feeding time!

p.s. – on the day that this post is published, our five-mile travel limit is being lifted by the Welsh Government, so I expect we will be getting out and about a bit before it gets changed back again!

I've been mucking about in the mountains for longer than I care to mention. I started out by walking my local hills, then went on to rock climbing, mountaineering and skiing. Still doing it, and still getting a buzz. I'm now sharing the fun, through my guided walking business (Hillcraft Guided Walking) and by writing routes for other publishers, mainly Walking World and Discovery Walking Guides. Just to make sure I keep really busy, I am also currently a member of my local mountain rescue team.
View all posts by Paul Shorrock →
This entry was posted in 5. North Wales and tagged Border Collie, Clwydian Hills, hiking, hillwalking, mountains, photography. Bookmark the permalink.