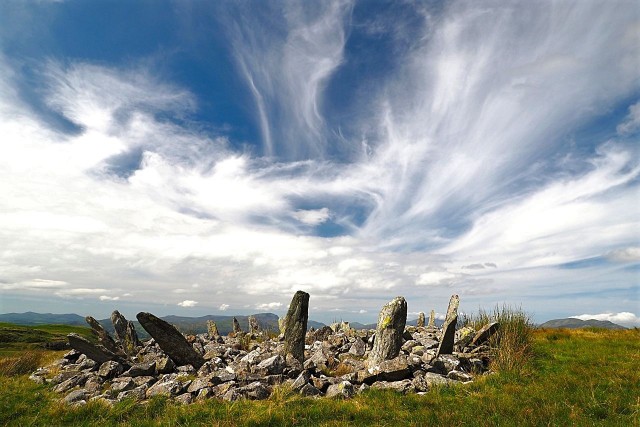 Bryn Cader Faner, otherwise ‘The Hill with the Chair with the Flag’

(For the best viewing experience, left-click the images and maps to zoom in, then use your browser return arrow to go back – go on, it really does work!)

The route to Bryn Cader Faner

Setting out – Moel Ysgyfarnogod on the skyline

A week after our trip to Rhinog Fach and Llyn Hywel (see post #280) Chris and I (plus Border Collie ‘Mist’ of course) were back in the Rhinogs again, this time at the northern end of the range.   Our last visit had been in April 2017 for a walk up Moel Ysgyfarnogod (see post #221).   On that trip, we had thought of visiting the ancient stone circle of Bryn Cader Faner on the way back, but postponed that due to lack of time and a boggy marsh barring the way – time to put that right. 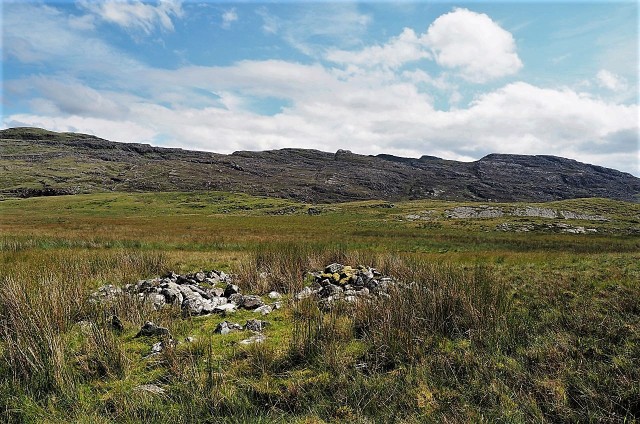 Small tumulus (burial cairn) on the route in

Border Collie ‘Mist’ with yet another tumulus ….

…. with a small stone circle nearby

‘Mist’ next to the stone circle, showing the size of the stones

The route out to the stone circle is over moorland rather than mountain, but it’s mostly around the 400-metre contour and a bad weather day wouldn’t be a whole lot of fun – thankfully, we had sun with just a gentle breeze.   Bryn Cader Faner (‘The Hill with the Chair with the Flag’) is over 4000 years old and we passed several ancient cairns along our route that possibly dated back to the same era – this area must have been very special to the people of the Bronze Age.

‘Mist’ checking out the locals, with a disused sheepfold just beyond

Interesting looking dish-shaped stone on the route in ….

…. and yet another sheepfold

The climate in the Bronze Age was milder than nowadays, and it’s likely that it would have been habitable to humans.   Today the weather is much cooler with the main residents being sheep, and any stone structures still standing are likely to be old sheepfolds – we passed several on the route in, along with an interesting looking dish-shaped stone, but the main interest was the stone circle ahead.

Closer to the circle ….

…. with the stones just becoming visible 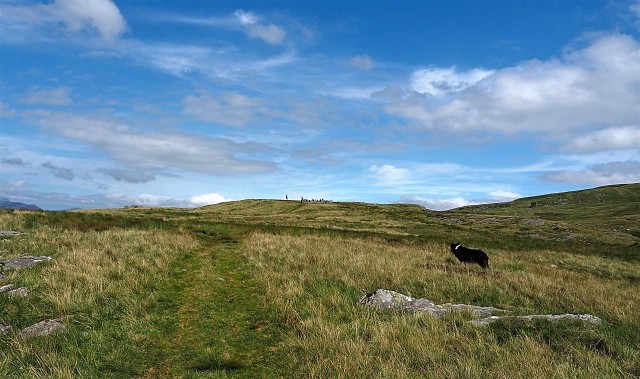 The track approaching the circle from the south ….

…. and finally a good view of the stone circle itself 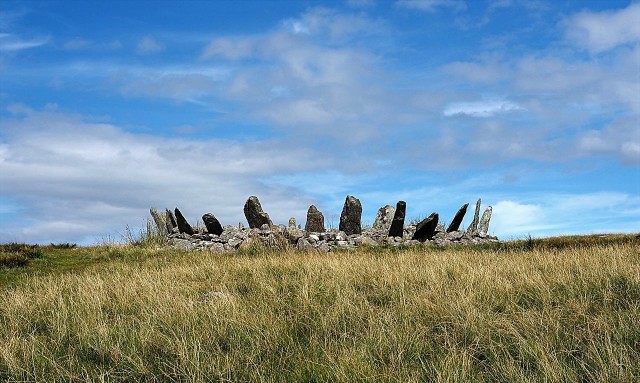 It is believed that the centre of the circle was a burial cairn, which measures  8 metres (27 feet) across and is 1 metre (3 feet) high.   Around the outside of the cairn there were previously up to 30 slender stone slabs, about 2 metres (6 feet) high, leaning outwards like spears, though there are now only 15 remaining.

Archaeologist Aubrey Burl, who until his death in April 2020 was regarded as the foremost authority on British stone circles, described Bryn Cader Faner as ‘one of the wonders of prehistoric Wales’.    Unfortunately, not everyone has shown the same reverence and respect over the centuries, with probably the worst act of vandalism being committed during WW2, when the army used the stones for target practice! 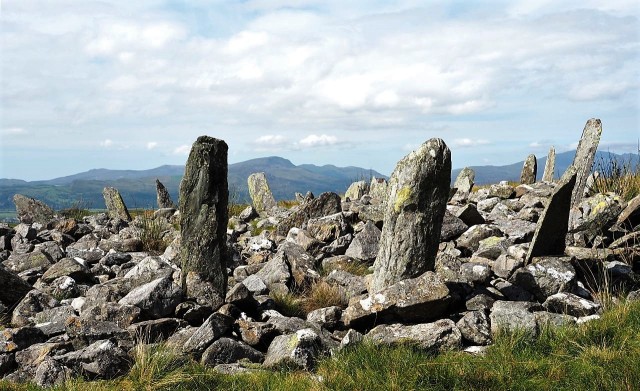 Yr Wyddfa (Snowdon) in the distance, about 20 kms to the north

We spent some time at the circle, including time for a lunch break and a brew of coffee.  The stones were the star of the show, but 20 kms to the north of us we also had a great view of Yr Wyddfa (Snowdon) standing 1085 metres high (3560 feet) with a cap of cloud around the summit.

The route back, with the soggy bit coming up!

The north side of Llyn Eiddew Bach

The south side of the lake

Then it was time to head back, crossing the marshy ground that leads to the small lake of Llyn Eiddew Bach (‘Small Ivy Lake’).  As we arrived back at the car, there was a great view across the estuary of the Afon Dwyryd (‘Two Fords River’) to the village of Portmeirion – it’s famous as a tourist attraction in its own right, but some may remember it as the setting for the cult 1967 television series, The Prisoner.  All of which was of no interest to ‘Mist’ as dinner time had already come and gone.

Portmeirion , about 5 kms away on the estuary of the Afon Dwyryd .…

….with a closer view of the famous village

I've been mucking about in the mountains for longer than I care to mention. I started out by walking my local hills, then went on to rock climbing, mountaineering and skiing. Still doing it, and still getting a buzz. I'm now sharing the fun, through my guided walking business (Hillcraft Guided Walking) and by writing routes for other publishers, mainly Walking World and Discovery Walking Guides. Just to make sure I keep really busy, I am also currently a member of my local mountain rescue team.
View all posts by Paul Shorrock →
This entry was posted in 5. North Wales, Stone Circles and tagged Border Collie, hiking, hillwalking, mountains, photography, Snowdonia. Bookmark the permalink.