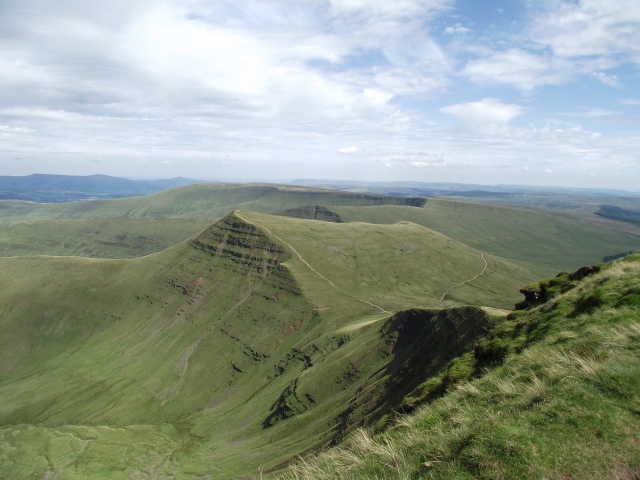 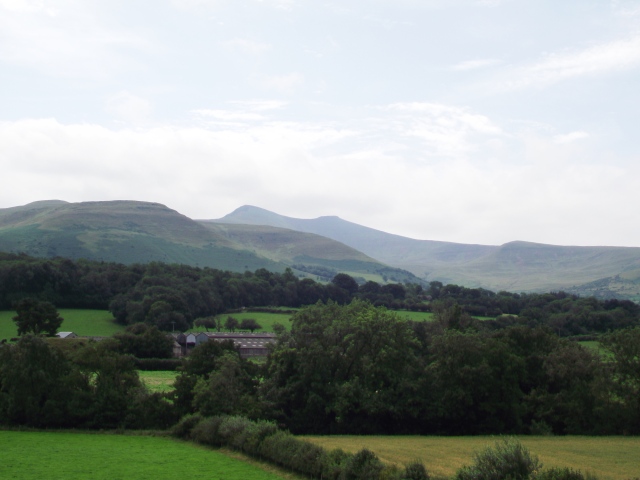 Fen y Fan and Corn Du on the skyline as seen from Libanus, near Brecon

You would also be wrong in thinking that the mountains of the Brecon Beacons are an easy option for hill-walkers.  This is the area used by the SAS to evaluate and train their new recruits, though if you fancy something a bit easier there is always the Brecon Beacons Traverse challenge – 72 miles and some 17000 feet of ascent, all to be completed in less than 24 hours! 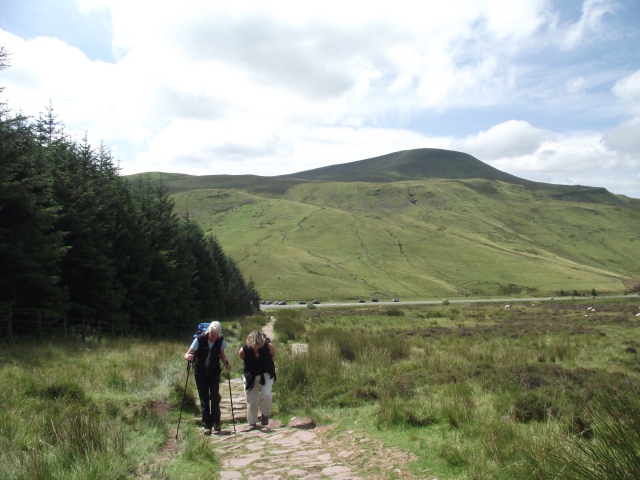 The initial ascent from the Storey Arms

Our aim was much more modest than either the SAS assessment or the Beacons Traverse – the route was from the Storey Arms to Pen y Fan via Y Gyrn and Corn Du. The initial ascent from the Storey Arms is steady enough, though our aim was to branch off left from the well worn track to follow the Right of Way marked on the map.  Although the Right of Way isn’t as easy to identify on the ground, it does avoid a 50-metre height loss on the better-known path – it also includes the poignant memorial to little Tommy Jones 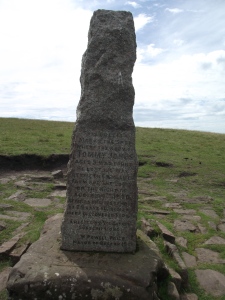 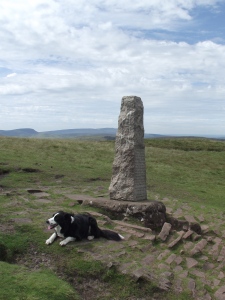 ‘Mist’ by the memorial obelisk

The inscription says it all – “This obelisk marks the spot where the body of Tommy Jones aged 5 was found. He lost his way between Cwm Llwch Farm and the Login on the night of August 4, 1900. After an anxious search of 29 days his remains were discovered Sept.”

It remains a mystery how the boy came to this high place. 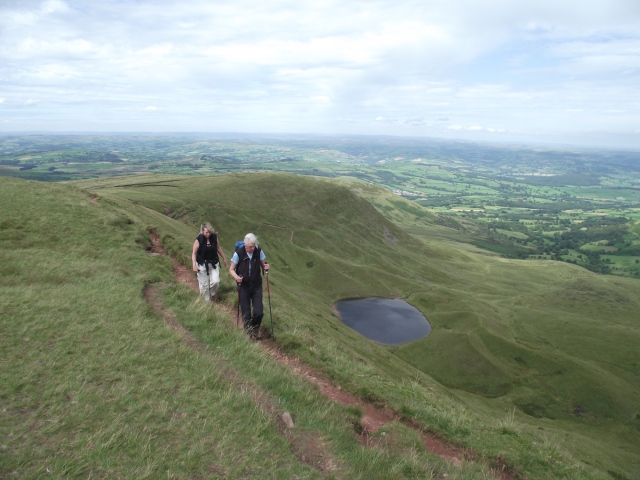 The path above Cwm Llwch

Beyond the memorial, the pace picks up a bit with a narrow path that hovers above the steep drop into Cwm Llwch.  The literal translation of Llwch is dust, and cwm is a valley, making Cwm Llwch “Dust Valley” – with the dry weather we had, this was an accurate description, with the red sandstone leaving a fine dust underfoot. 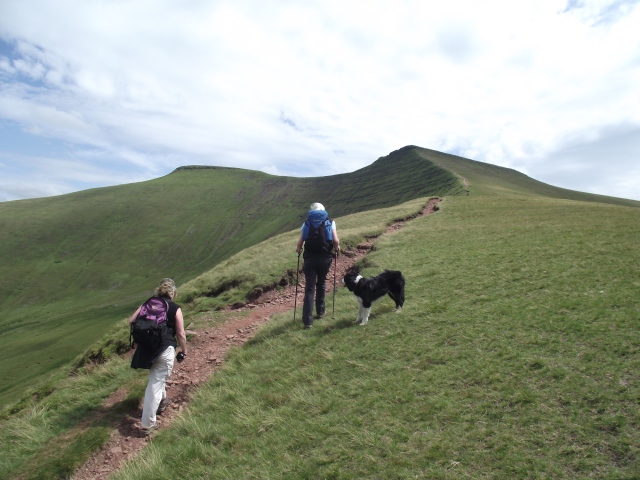 The final approach to Corn Du above Cwm Llwch 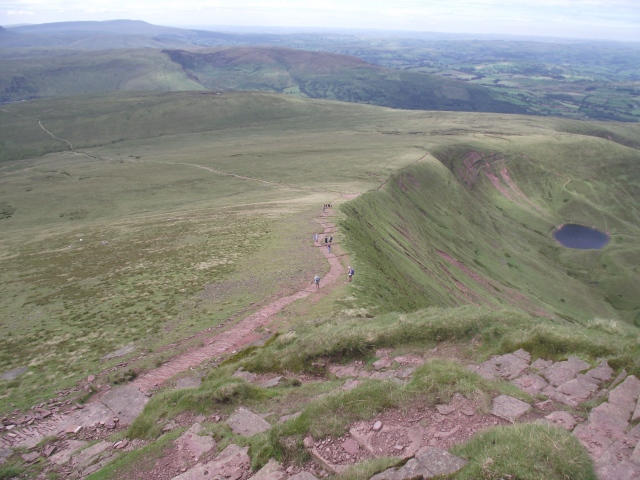 Looking down the Cwm Llwch path from Corn Du

The main reason for picking the path via Y Gyrn had been to avoid losing height into the small valley of Blaen Taf Fawr.  The other reason was to avoid the crowds following the more popular ascent route – however, we soon caught them up on the summit of Corn Du. 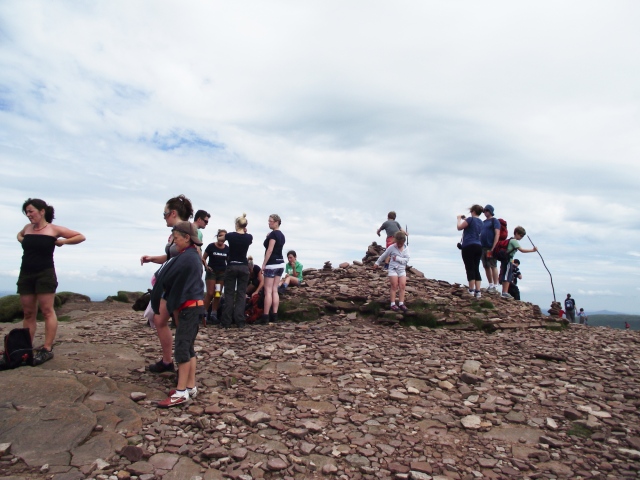 Crowds on the summit of Corn Du

Corn Du translates as “Black Horn”, and from some angles the summit can appear to be ‘pointy’ and black in the light conditions that usually prevail in the Brecon Beacons.  Corn Du also appears to be the busiest summit, although at 873 metres altitude it is lower than Pen y Fan (886 metres).  In fact, Pen y Fan is the highest summit in Britain south of Snowdonia, but the top is strangely quiet after the hubbub of Corn Du. 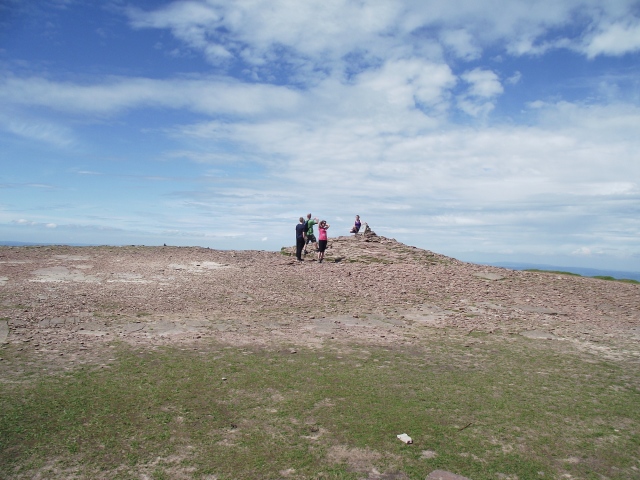 Sometimes size really is everything, which is possibly why we chose Pen y Fan for our lunch stop, though being able to find a bit of empty space might have had something to do with it as well. 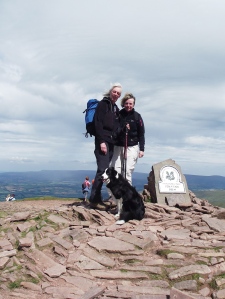 Chris, Barbara and ‘Mist’ on the summit of Pen y Fan 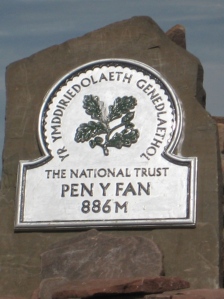 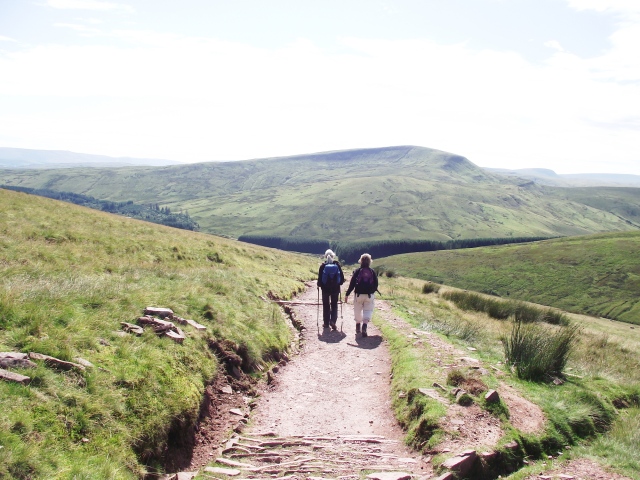 On the descent - heading for the ice cream stall

From Pen y Fan we had to retrace our steps briefly to contour below Corn Du to follow the other popular route down to the car park near Pont ar Daf, where we found a stall serving superb local ice cream – perhaps there’s a good reason after all for following the popular route! 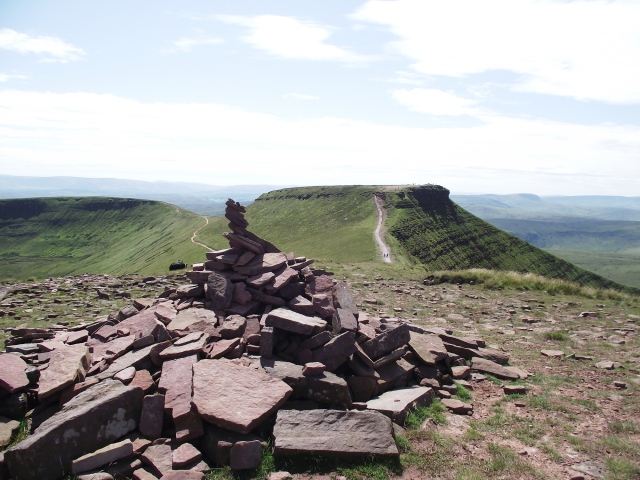 Corn Du from Pen y Fan on the return route

I've been mucking about in the mountains for longer than I care to mention. I started out by walking my local hills, then went on to rock climbing, mountaineering and skiing. Still doing it, and still getting a buzz. I'm now sharing the fun, through my guided walking business (Hillcraft Guided Walking) and by writing routes for other publishers, mainly Walking World and Discovery Walking Guides. Just to make sure I keep really busy, I am also currently a member of my local mountain rescue team.
View all posts by Paul Shorrock →
This entry was posted in 6. Mid and South Wales and tagged Brecon Beacons, Corn Du, hillwalking, mountains, Pen y Fan. Bookmark the permalink.