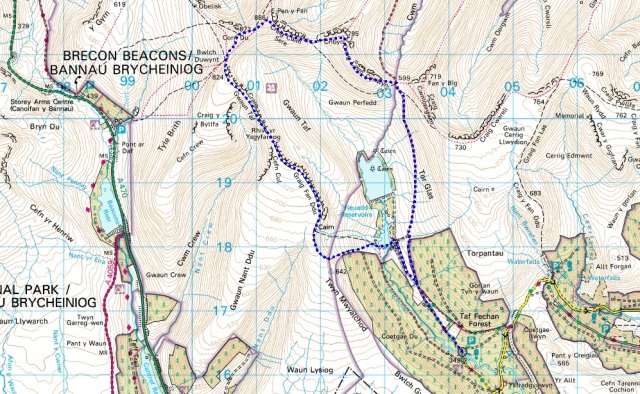 Living on the edge of the Clwydian Hills, with Snowdonia just an hour away by car, it’s easy to ignore the other hills and mountains of Wales. Last summer we took a trip south including a couple of days out in the hills, and our attention turned towards the Brecon Beacons. I’ve written about the Beacons before (see post #38) and we haven’t had a bad day here yet – Pen y Fan (the highest peak in the Beacons) was on the menu again, but this time from a different direction.

The lane towards the Neuadd Reservoirs

Looking down towards the Neuadd Reservoirs

Our trips to Mid and South Wales usually include a visit to friends, and Barbara was up for a walk in the Beacons as part of her preparation for a trekking trip in the Himalayas. The horseshoe circuit from the Neuadd Reservoirs looked good on the map, and included the summits of Graig Fan Ddu, Corn Du, Pen y Fan and Cribyn. With a good weather forecast thrown in, we had all the ingredients to make a good day out.

The final steep bit up an unpleasant earthy gully ….

…. before reaching a level path ….

An easy walk up a lane loosened us up for the major height gain of the day – 200 metres over a distance of 800 metres was always going to feel a bit steep, but it didn’t take long to reach the top of the 25% slope. An unpleasantly loose earthy gully brought us to almost level ground at Craig Fan Ddu – whilst Chris and Barbara took the easy path, I went off-piste with Border Collie ‘Mist’ to visit the scene of a tragic WW2 flying accident.

In May 1942, Spitfire X4588 of 53 Operational Training Unit RAF Llandow, piloted by Sergeant Donald Perry Carruthers of the Royal Canadian Air Force, took off to take part in a formation flying exercise. A combination of bad weather and a small error in navigation resulted in the aircraft becoming detached from the formation. The aircraft subsequently crashed on the summit of Graig Fan Ddu, killing Sgt Carruthers.

Memorial cairn at the crash site

The site is now marked by a small cairn incorporating some of the wreckage from the aircraft, and a glint of metal helped me home in. Some people find these sites macabre whilst others find them ugly – for me they are a fitting memorial to the sacrifices made by others to preserve the freedoms we often take for granted. I stayed in silence for a couple of minutes before sending ‘Mist’ off to find Chris and Barbara– in a short time she was back with me, barking to indicate where the others were.

Still on the level path ….

Cwm Crew dropping down to the south-west

Having made our major height gain for the day, the route now was a steady wander towards Corn Du and Pen y Fan. The broad ridge narrowed at Rhiw yr Ysgyfarnog, but not enough to bother Chris who isn’t too keen on big drops. The main interest for the humans was the unmistakable skyline ahead, but ‘Mist’ was far more interested in another Border Collie heading towards us! 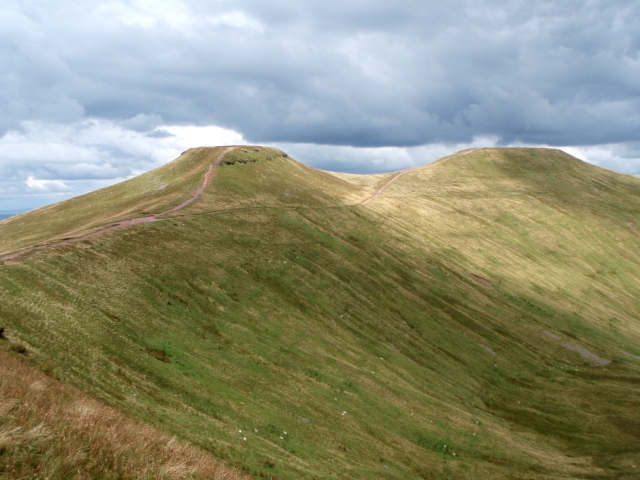 …. and Cribyn and Pen y Big on the opposite side of the Valley

Looking back at the pass of Bwlch Duwynt we had great views of Craig Fan Ddu, now well behind us. Corn Du and Pen y Fan were directly ahead, and across the valley our last summit, Cribyn, was waiting. 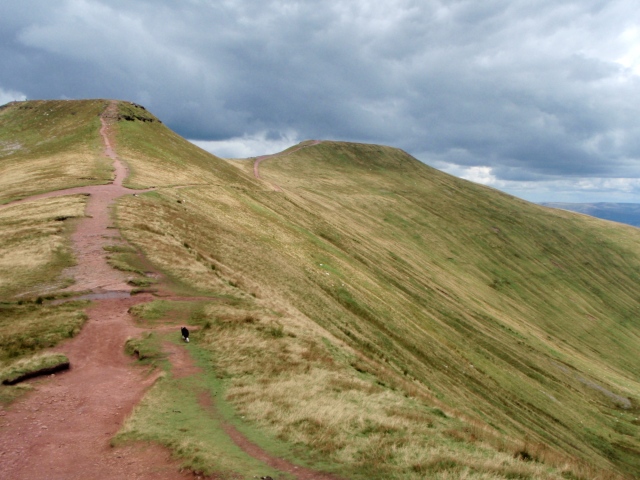 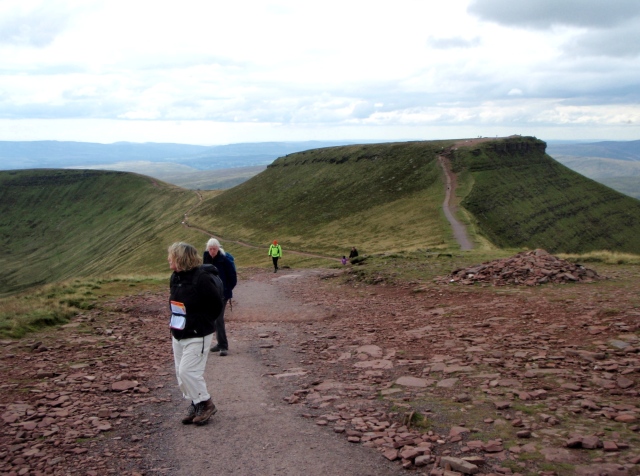 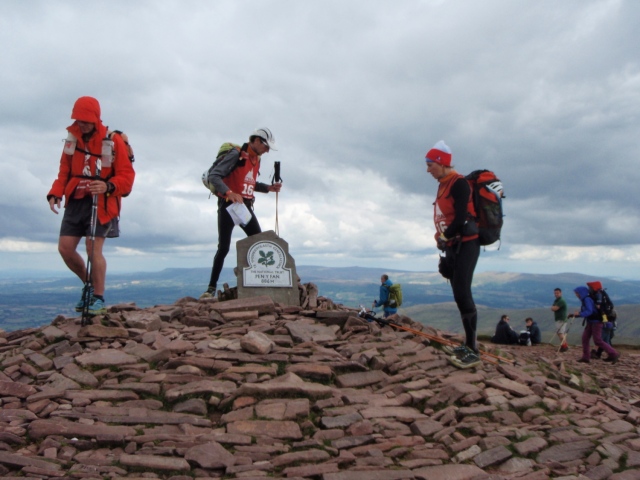 A small height gain took us to the top of Corn Du, quickly followed by the main attraction of Pen y Fan. The summit was busy with competitors on the ITERA race, a 5 day nonstop adventure race for mixed gender teams of 4. The route is about 600 kms in length, and includes running, trekking, mountain biking, kayaking, canyoneering and some rope work. It made our day out look quite puny in comparison!

Start of the descent from Pen y Fan with Cribyn ahead 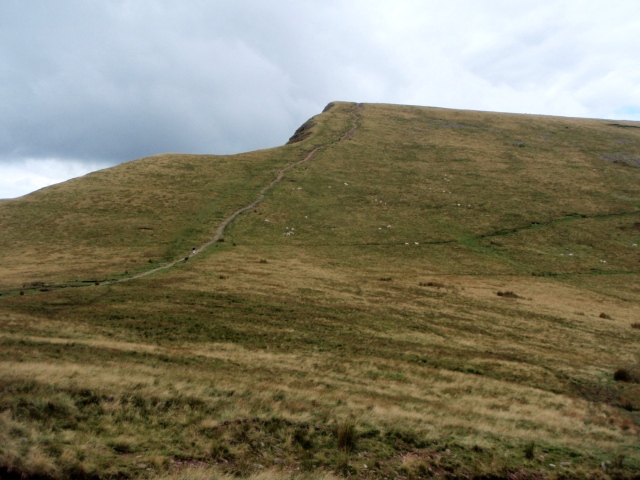 The route up Cribyn

Heading back towards the Neuadd Reservoirs

The descent down Craig Cwm Sere is rough and steep, which aggravated an already ‘grumbling’ knee joint with Chris. At the start of the ascent of Cribyn, she decided to take the easier path contouring round the south-west side. I went with her to keep her company, but Barbara was in turbo mode now – she went solo for Cribyn, and soon caught us up at Bwlch ar y Fan. From there it was downhill, passing the Neuadd Reservoirs on the other side.    The next day the rain was torrential!

I've been mucking about in the mountains for longer than I care to mention. I started out by walking my local hills, then went on to rock climbing, mountaineering and skiing. Still doing it, and still getting a buzz. I'm now sharing the fun, through my guided walking business (Hillcraft Guided Walking) and by writing routes for other publishers, mainly Walking World and Discovery Walking Guides. Just to make sure I keep really busy, I am also currently a member of my local mountain rescue team.
View all posts by Paul Shorrock →
This entry was posted in 6. Mid and South Wales, Aircrash Sites and tagged Border Collie, Brecon Beacons, hillwalking, mountains, photography. Bookmark the permalink.