#80 – Sunny day on the Langdale Pikes 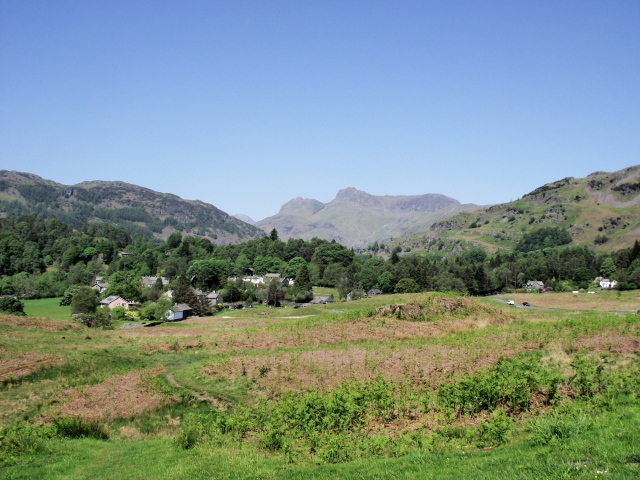 The Langdale Pikes, seen from Elterwater

It’s never happened to me before.  I went into the Hiker’s Bar of the Old Dungeon Ghyll Hotel in Langdale on a Sunday afternoon, and it was empty!  Not a case of alien abduction though, as dozens of customers were sat in the garden area enjoying a rarity in Langdale – a hot, sunny afternoon.  The pub, known as “The ODG” to thousands of walkers and climbers, is an institution, and makes a perfect end to a good day in the hills.  Which is why we were there. 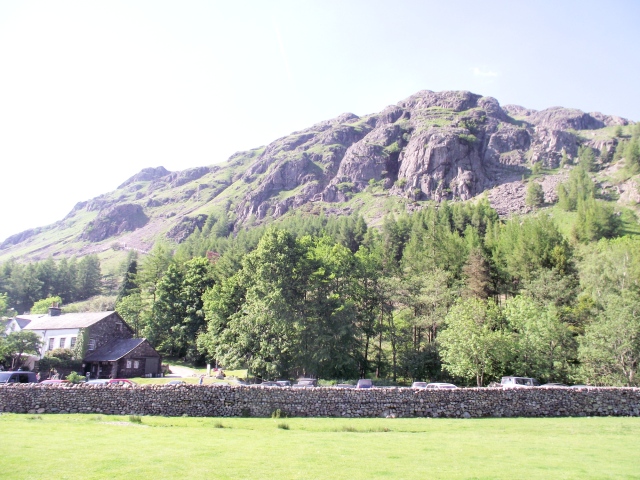 Langdale was the first part of the Lake District that I got to know well.  In the days when the M6 Motorway finished just north of Lancaster it was possible to get from home near Preston to the ODG in an hour – that is, if it was night and a certain lunatic friend was driving!  Most of my early rock climbing was in the valley, and I got to know it well. 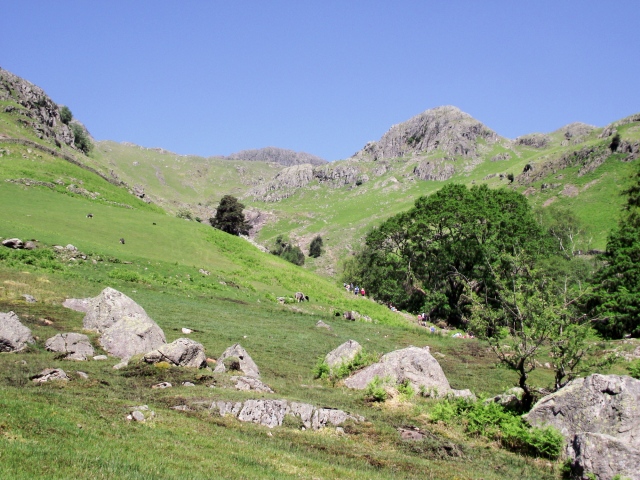 Looking across to the Stickle Ghyll path, the main path to Pavey Ark

On the path to Langdale Pikes via Dungeon Ghyll Waterfall

One route we could have followed in our sleep back then was the Stickle Ghyll path to Pavey Ark.  I once read that in the thirty years following the Second World War, the path was walked more than in all previously recorded human history – I can believe that, as it used to be a real mess, very eroded.  It’s still a busy route but Chris and I were going a different way on this trip. 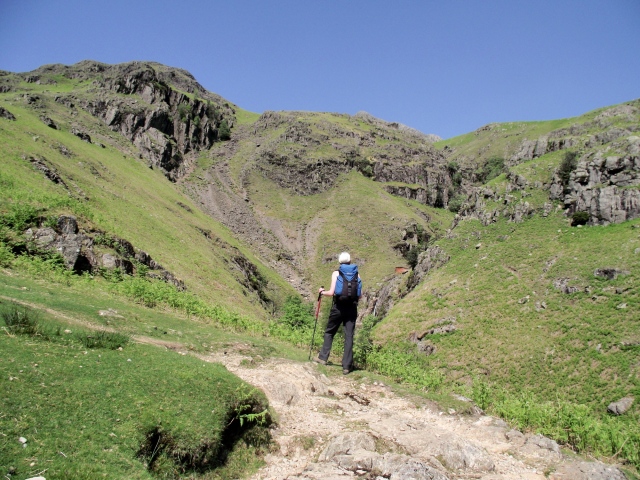 Chris looking across towards Dungeon Ghyll and its waterfall

Closer view of the falls

In all my wanderings in my youth I had never followed the route to the Langdale Pikes by the ravine of Dungeon Ghyll – that was probably because we had come to rock climb, and the Dungeon Ghyll path doesn’t lead to climbing crags.  It was time to fill in some of the gaps. 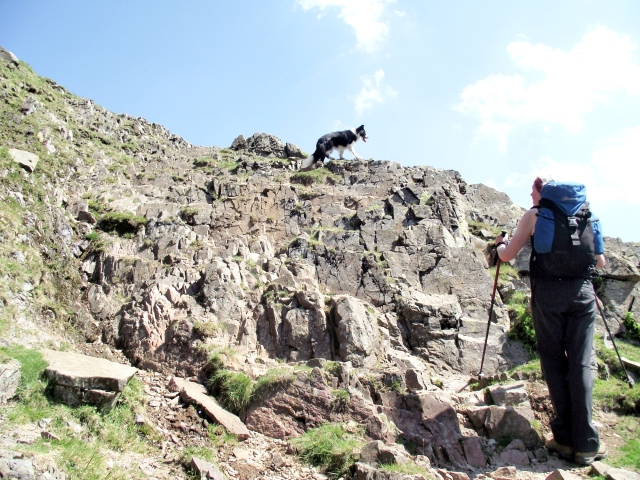 We had picked the right day, with the heat of the sun tempered by a cooling breeze.  The path gains height steadily with the occasional rock step along the way.  The waterfall (Dungeon Ghyll Force) was pretty without being spectacular, but the views down to the Langdale valley were eye catching. 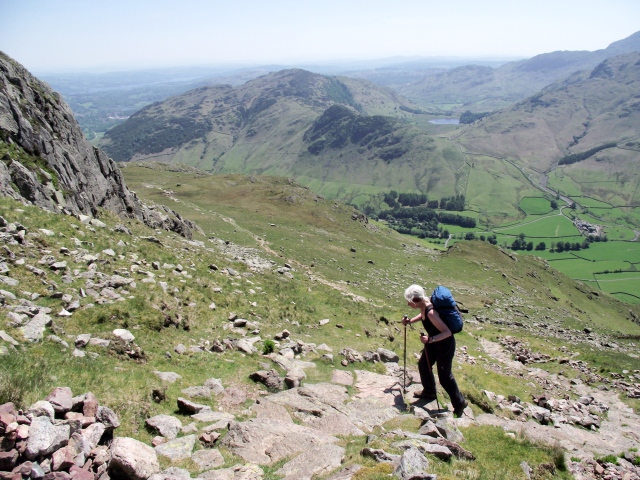 Looking down towards Blea Tarn and Side Pike

Final part of the ascent to the Langdale Pikes 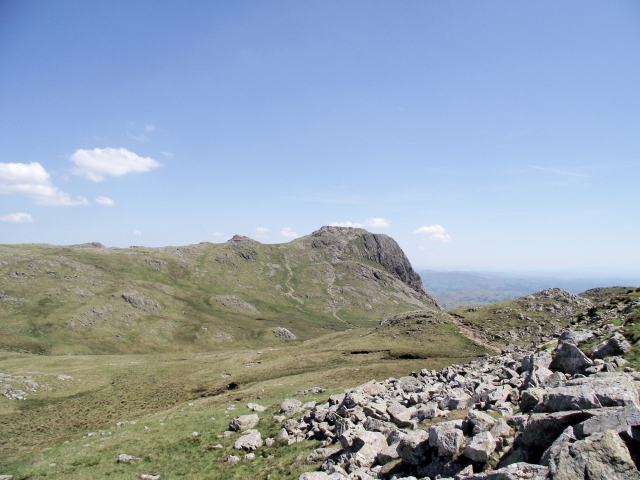 The flat top of Harrison Stickle, unmistakable from most angles

The path feels like part of the valley until the last 100 metres or so of ascent.  Things get steeper before coming to a plateau above the climbers playground of Gimmer Crag.  The peaks that catch the eye are the ones that can be seen from the M6, about 35 kilometres (22 miles) away.  The flat top of Harrison Stickle is unmistakable as is the dome shape of Pike o’ Stickle. 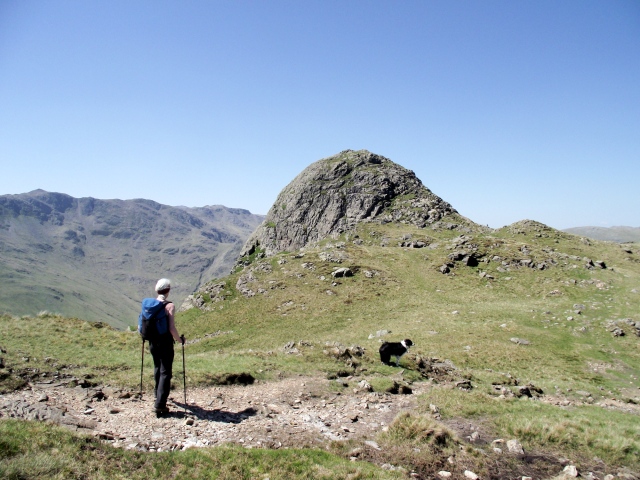 Top of the gully that contains the ‘Stone Axe Factory’ 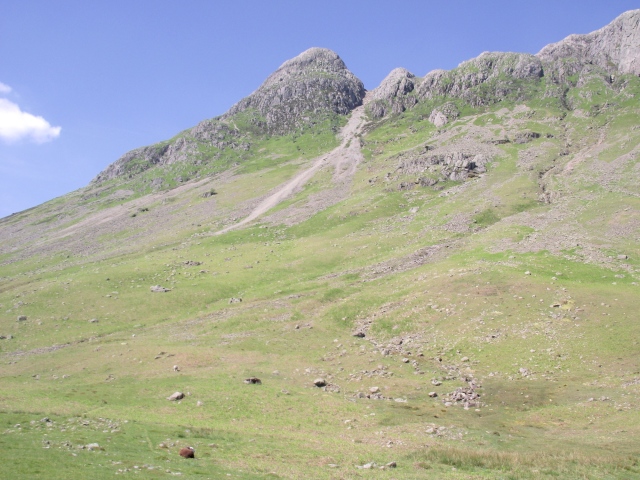 Pike o’ Stickle with the ‘Stone Axe’ gully, seen from the valley bottom

Just before Pike o Stickle, the path crosses above a steep gully that was one of the earliest industrial sites in the UK.  About 5000 years ago, Neolithic people quarried the stone in the gully to make stone axe heads.  The quality of the stone, and the site itself, seems to have made these axe heads very special, and they account for 25% of the total axe finds in Britain.  Finds of the same axe heads have also been made in Ireland and Continental Europe.  The site is now protected by law.

On Martcrag Moor with (L to R) Bowfell, Esk Pike and Great End beyond

Descending the moor, with Pike o’ Stickle to the right

Pike o’ Stickle looming above our return route along Langdale

A gradual descent from Pike o’ Stickle took us to Stake Pass, the ancient by-way linking Langdale and Borrowdale.  The way down is steady, and the views of Langdale are adequate explanation of the name – Langdale (Lang Dalen) comes from the Old Norse language spoken by the Viking invaders over 1000 years ago and means ‘Long Valley’. It’s well named, but the walking is easy and before long we were sat outside the ODG with a pint of cold cider – a good end to a good day!

The route back to the pub – Langdale, the ‘Long Valley’

I've been mucking about in the mountains for longer than I care to mention. I started out by walking my local hills, then went on to rock climbing, mountaineering and skiing. Still doing it, and still getting a buzz. I'm now sharing the fun, through my guided walking business (Hillcraft Guided Walking) and by writing routes for other publishers, mainly Walking World and Discovery Walking Guides. Just to make sure I keep really busy, I am also currently a member of my local mountain rescue team.
View all posts by Paul Shorrock →
This entry was posted in 2. Lake District and tagged hillwalking, Langdale, mountains, photography. Bookmark the permalink.