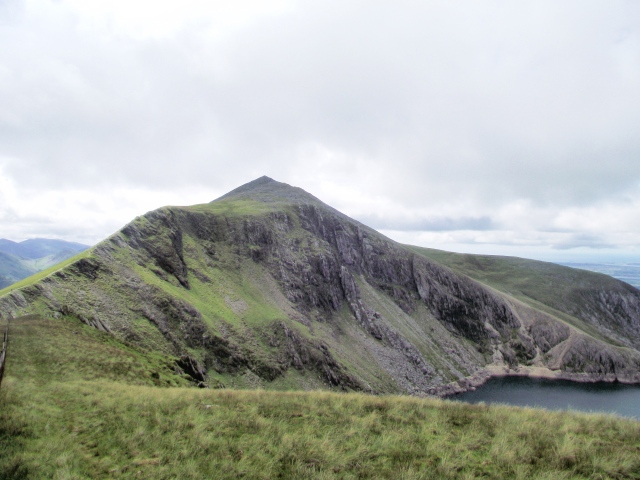 It would seem that Elidir was a big bloke – apparently his stallion could carry seven riders, and if an ancient British chieftain wanted a memorial, something really big that would carry his name down through the centuries, then the mountain we now call Elidir Fawr would seem to fit the bill. 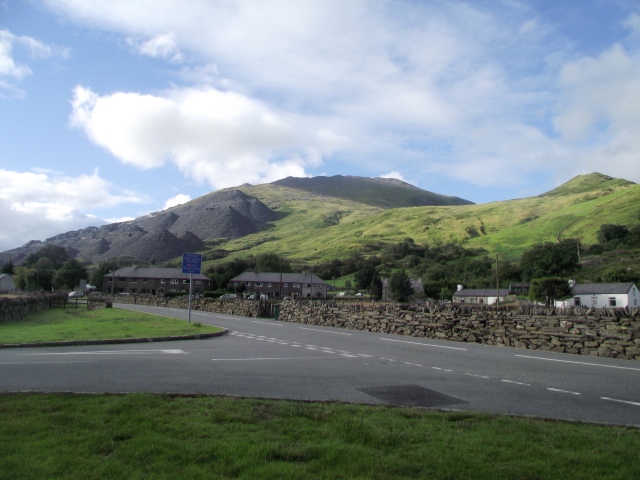 I’m currently catching up on some Welsh mountains I haven’t yet walked.  It’s always easier to go for the local area – as a teenager in North Lancashire I got to know the Bowland Hills well, and living in Cumbria for 25 years gave me a cosy familiarity with the mountains of The Lake District.  After seven years in West Yorkshire, I know the Yorkshire Dales and South Pennines pretty well, and now I’m living in North Wales and catching up with the mountains that I have been driving past for years, including Elidir Fawr. 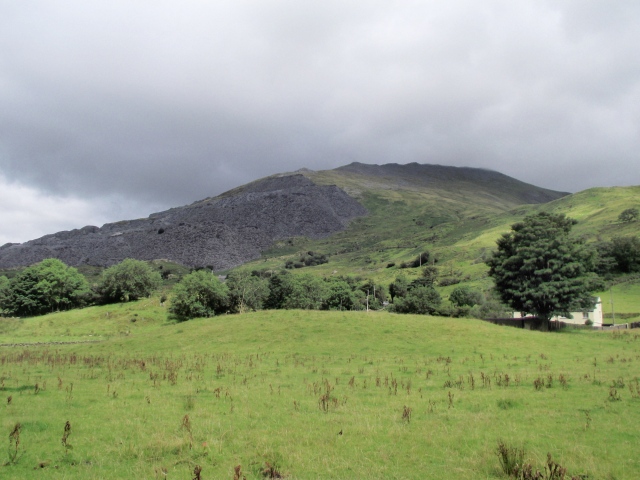 Viewed from the north, Elidir Fawr looks big, and seems to dwarf everything else around – seen from my start point at Nant Peris it looked a heck of a lot bigger!!  Elidir Fawr is 924 metres high (3031 ft) making it the 13th highest mountain in Wales.  From Nant Peris the height gain is 815m, and it’s up all the way. 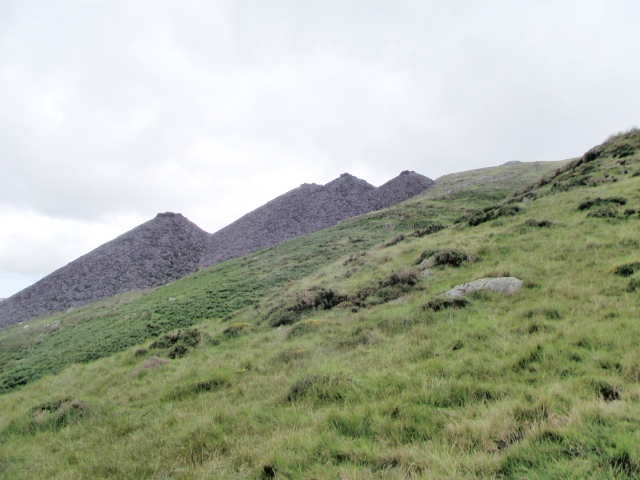 Slate quarry spoil heaps on the way up 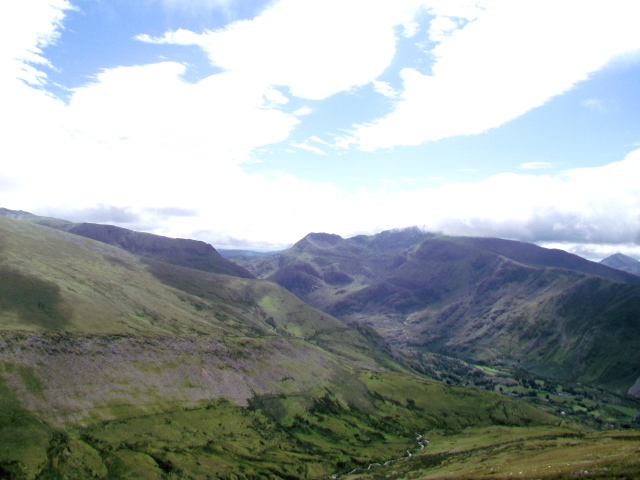 The Snowdon Range, with the Crib Goch Ridge very obvious in the centre 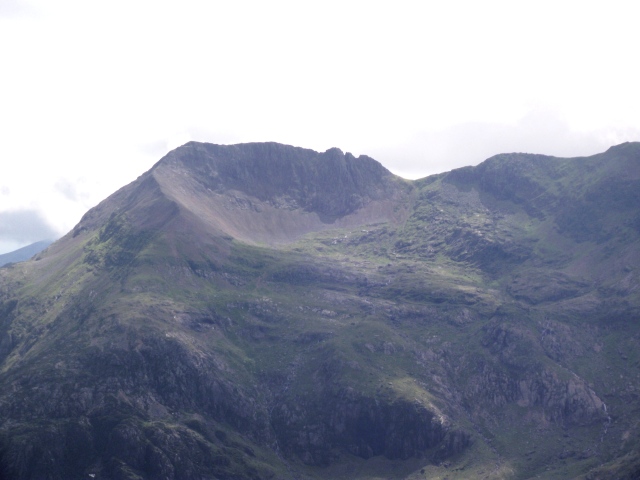 Close-up of the Crib Goch Ridge

From Llanberis and Nant Peris, the west side of Elidir Fawr looks like one big quarry tip, but the mountain is so big that the relics of an old industry are soon left behind.  To the front the view is a relentless grassy slope, but behind there’s a great view of the Snowdon Range.  The view also starts to extend over the mountains of the Glyderau, Carneddau and Snowdon Ranges, and out to the Llŷn Peninsula. 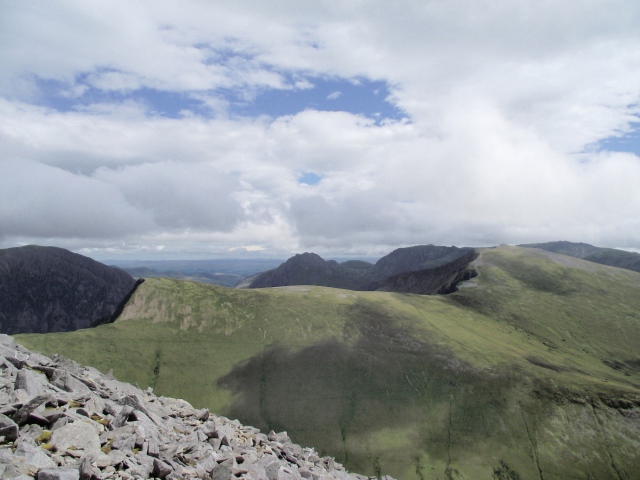 The Glyderau, with Foel Goch and Y Garn in the middle ground and Tryfan, Glyder Fach and Glyder Fawr in the background 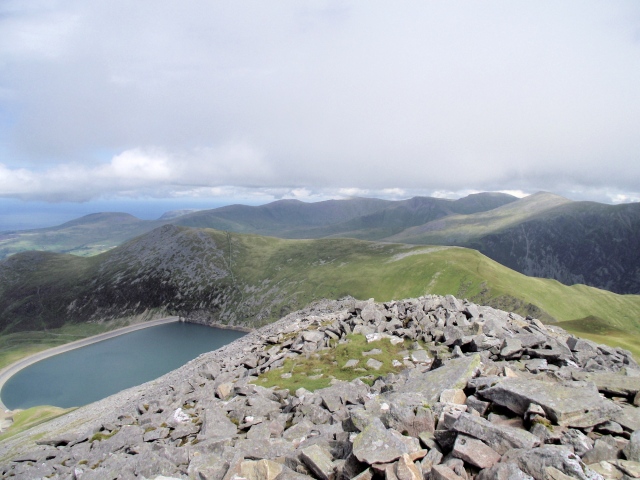 Carnedd y Filiast (left) and Mynydd Perfedd in the middle ground, with the Carneddau behind 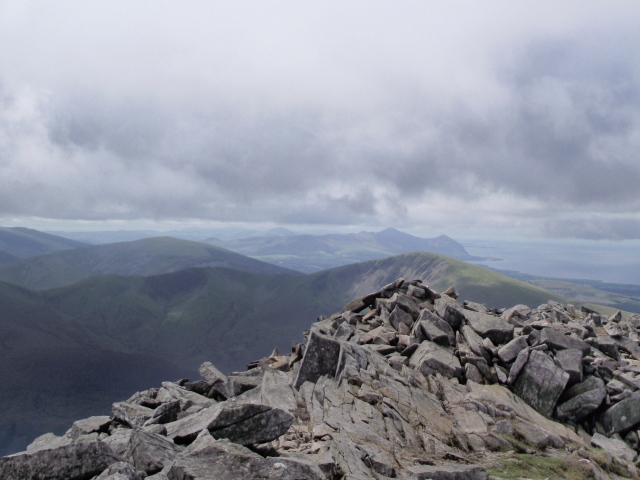 Looking southwest towards the Llŷn Peninsula

I didn’t spend too long admiring the view from the summit though, as I had to lose 185 metres down to Bwlch y Marchlyn before starting up yet again to the next peak, Mynydd Perfedd at 812 metres.  We English often mangle this in translation to ‘The Perfect Mountain’, but all the Welsh dictionaries I’ve read go for Perfedd meaning ‘Entrails’!  It obviously takes guts to walk in Wales! 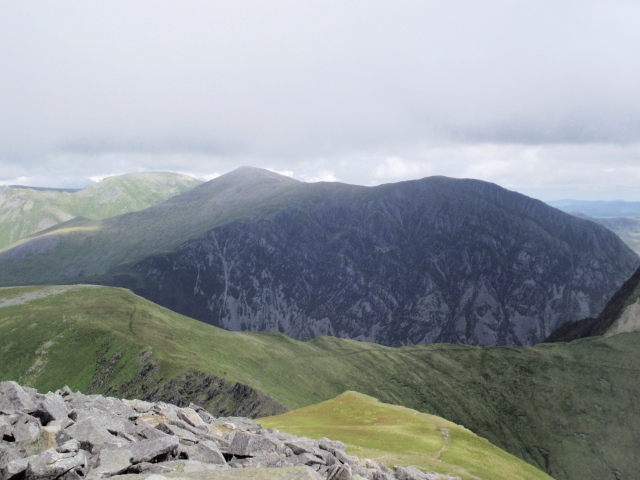 Start of the descent to Bwlch Marchlyn 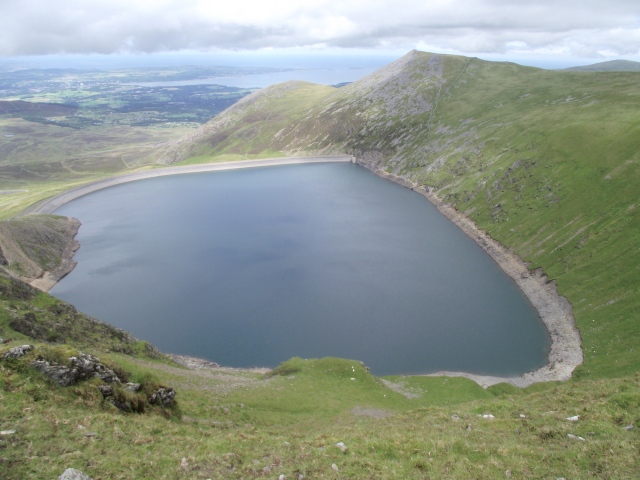 The reservoir of Marchlyn Mawr 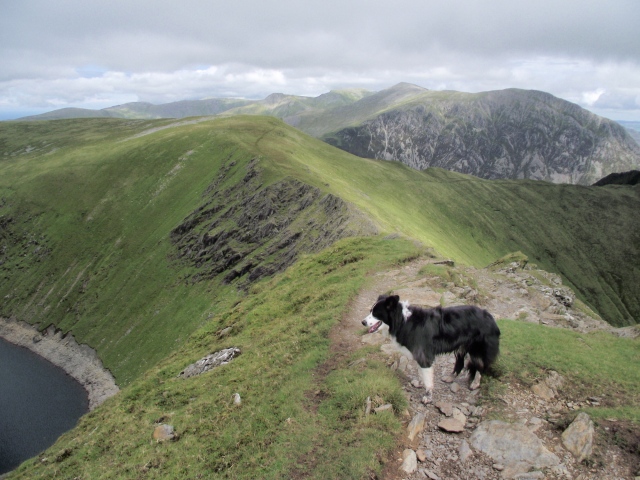 ‘Mist’ on the descent to the bwlch 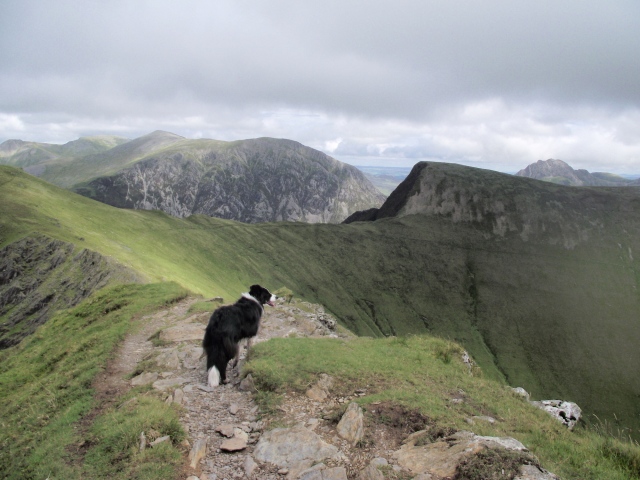 On the way to Mynydd Perfedd there were great views down to the Marchlyn Mawr Reservoir (‘The Big Lake of the Stallion’).  It’s part of the amazing ‘Electric Mountain’ power station, and the original idea behind it was that cheap ‘off-peak’ power would be used to pump water up to the reservoir, to be released at times of greater demand, generating electricity as it flowed down to Llyn Peris Reservoir below.  The power station is now used as a ‘fast response’ generator, used to augment the National Grid at times of sudden surges. 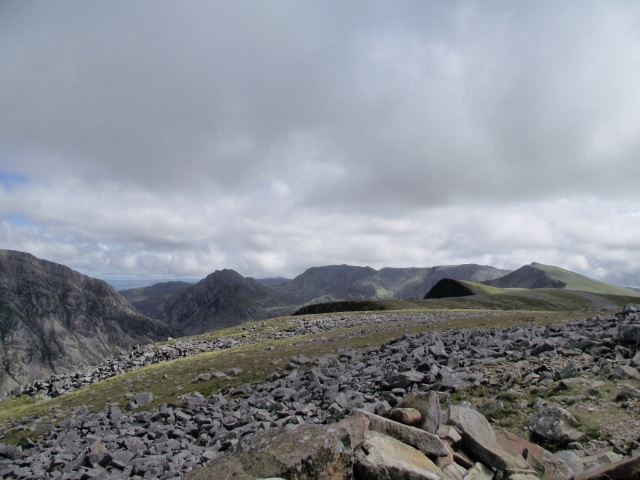 The view towards Y Garn … 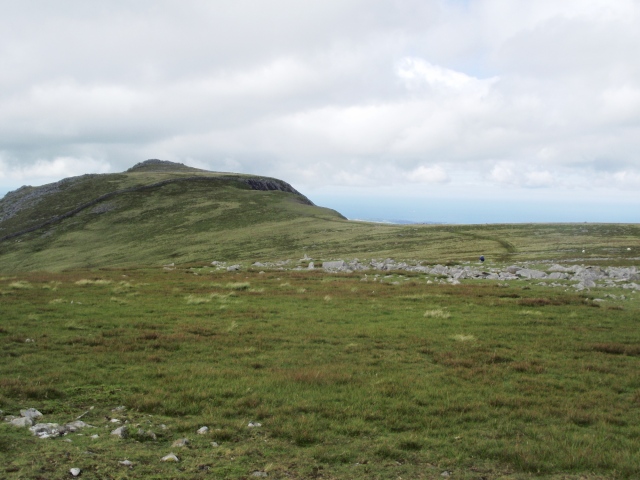 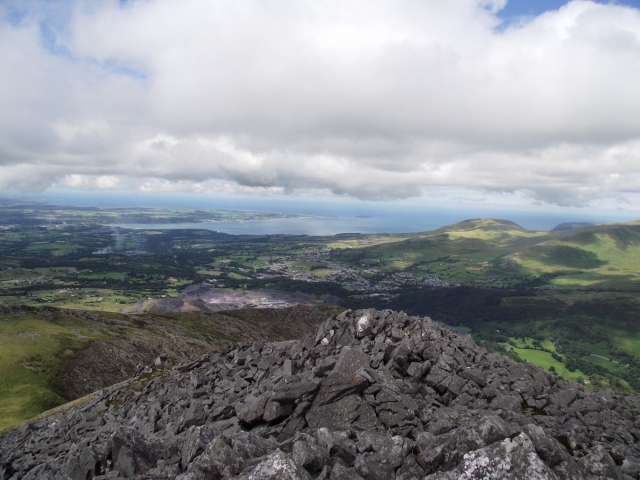 … for the view to the sea from Carnedd y Filiast

From Mynydd Perfedd my route back was via Y Garn (‘The Cairn’) but before that I had a diversion to Carnedd y Filiast (‘The Cairn of the Greyhound Bitch’) at 821 metres.  This involved a height loss and gain of a mere 40 metres, but once back on track I had to lose another 100 metres before heading up to Foel Goch (‘the Bare Red Hill’) at 831 metres.  This meant a height gain of 120 metres before another loss of 80 metres then the final ascent of the day – 200 metres height gain to Y Garn. 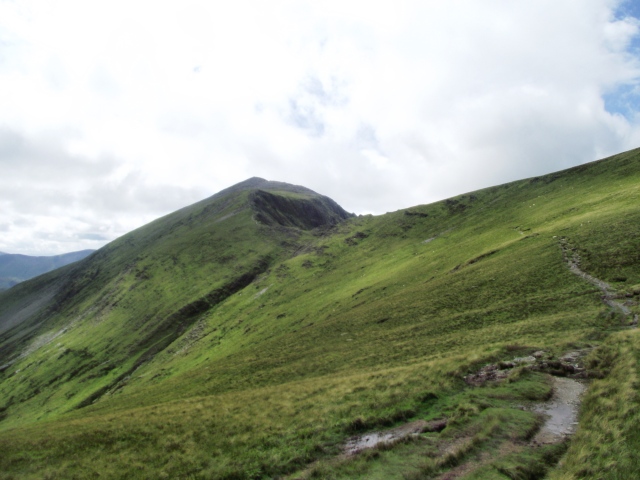 Looking back to Elidir Fawr before heading up Foel Goch 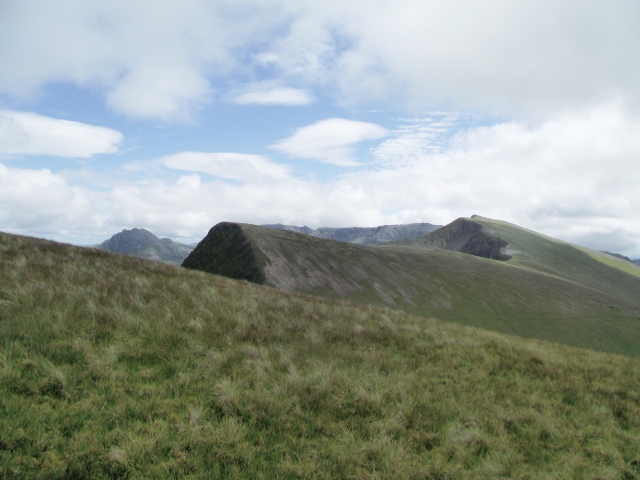 My mate John Bamber would have said “It’s up and down like a fiddler’s elbow”, and so it was. (He has a more risqué version of that saying that I won’t share!)  It was a roller coaster ride but one with views, with the Snowdon Range on one side and the mountains of the Carneddau on the other.  Just before Y Garn there were great views down to the Ogwen Valley. 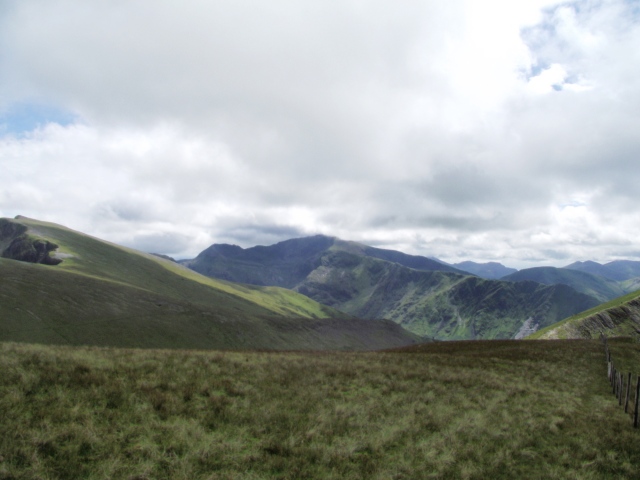 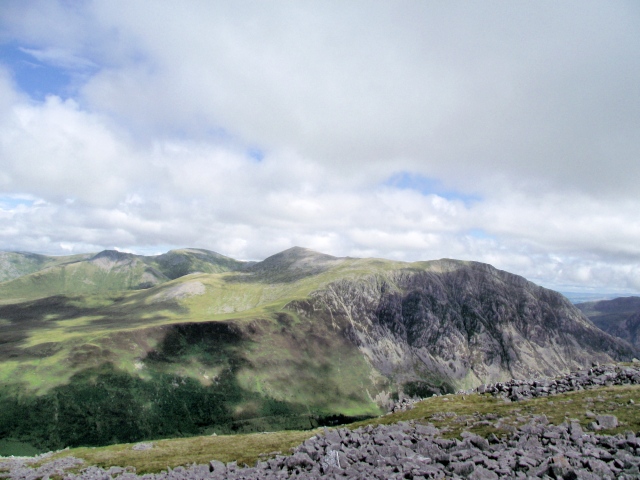 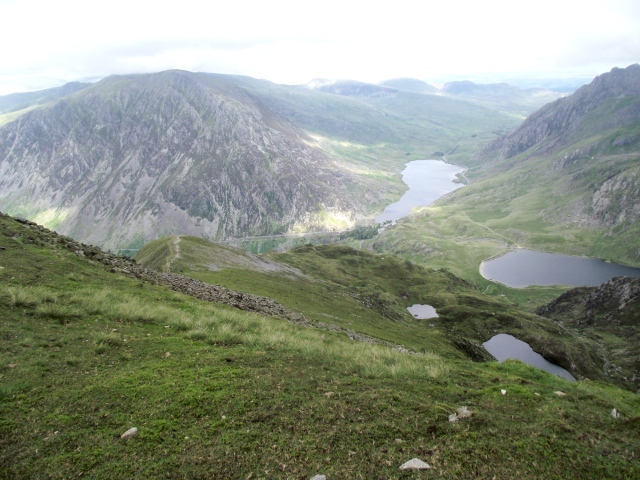 The view down to Ogwen 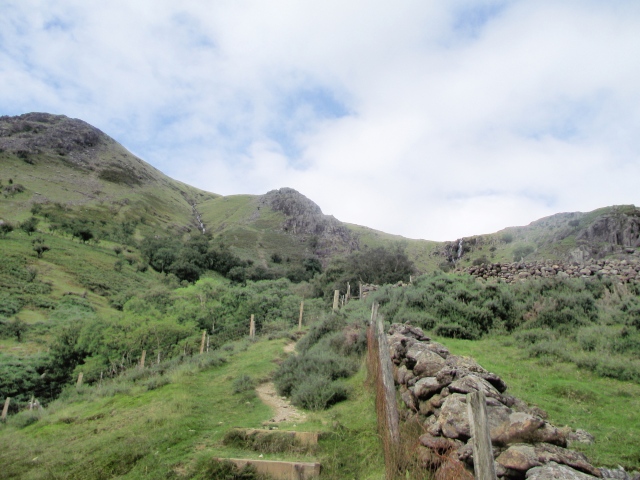 Looking back up to the final descent to Nant Peris

After all the ups and downs there was one final down, back to the valley at Nant Peris, a drop of over 830 metres.  The dog was asleep almost as soon as she was back in the car.  Good job it was my turn to drive, then! 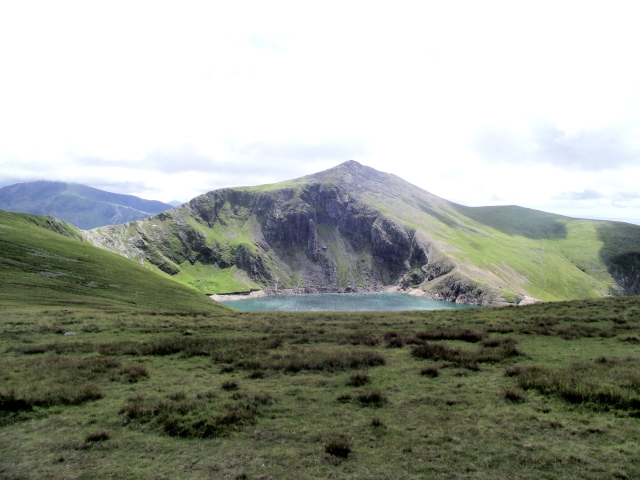