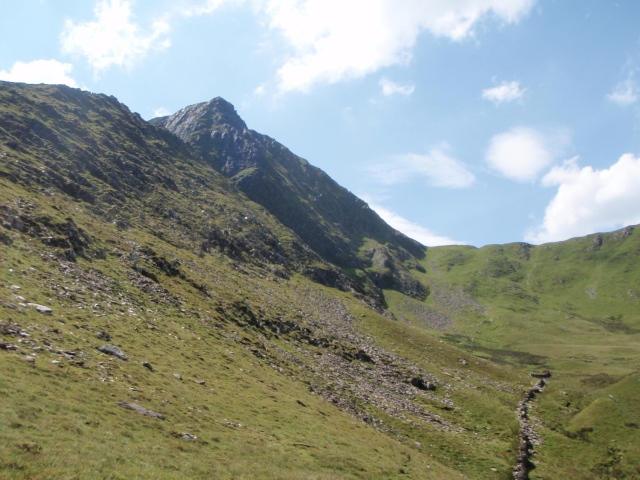 Foel Goch from the High Level path above Nant Ffrancon 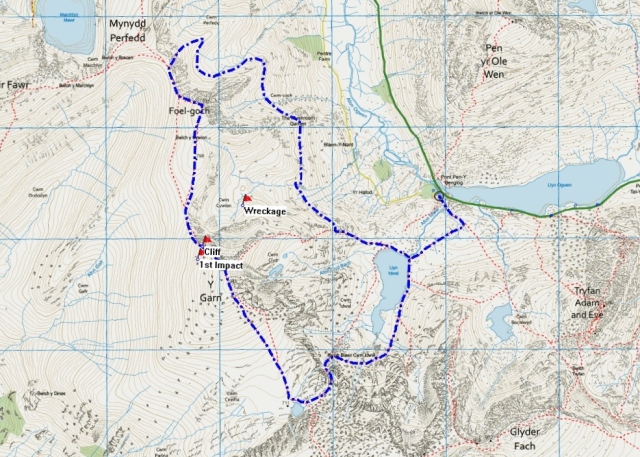 Map showing my route, and the site of the aircrash of February 1945

After my recent Carneddau trip (see post #155) I had checked the map and realised that I had passed close to several aircraft crash sites on the route – most of these date back to WW2, when training flights sometimes ended in tragedy in the mountains of Snowdonia. This time I’d decided on a day out in the Glyderau, mainly to check out a path I had read about running below the slopes of Y Garn and Foel Goch. Whilst checking the route I came across the story of a flying accident in 1945 – a bit of history with the walk seemed like a good idea. 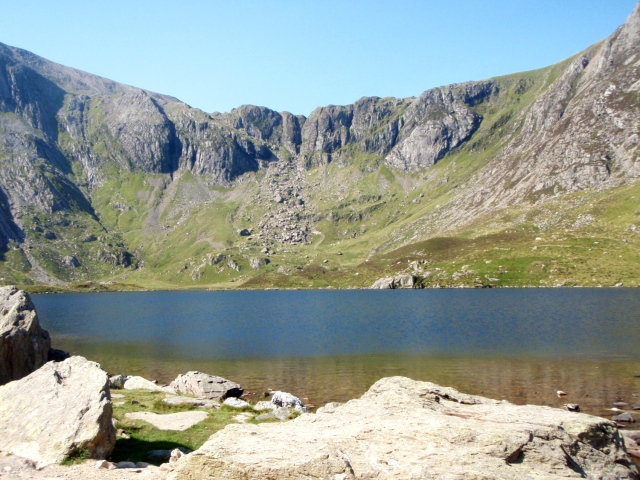 Llyn Idwal with Twll Du (The Devil’s Kitchen) behind 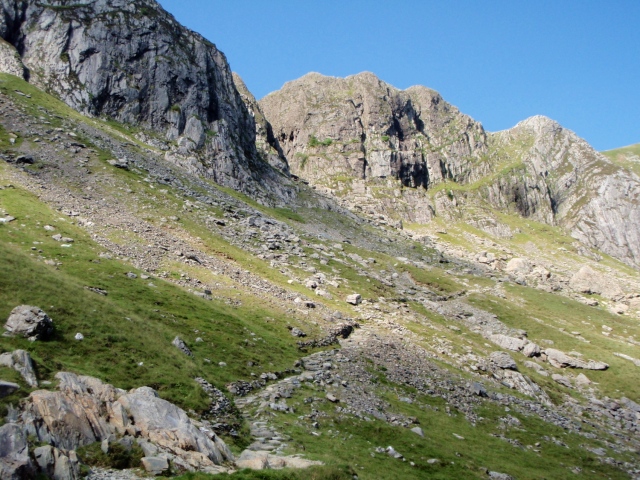 The path from Idwal slabs to Twll Du 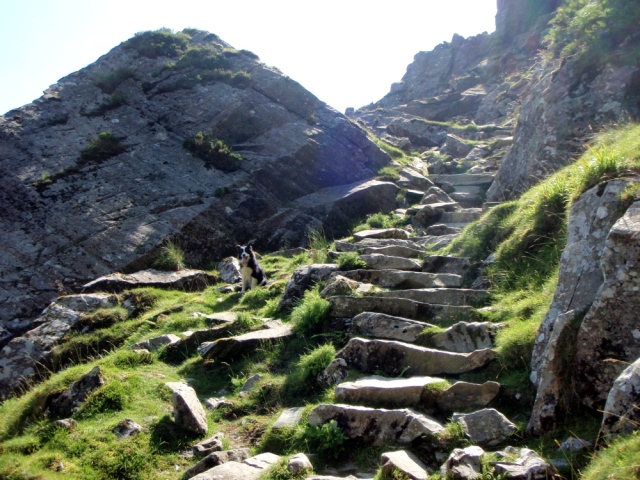 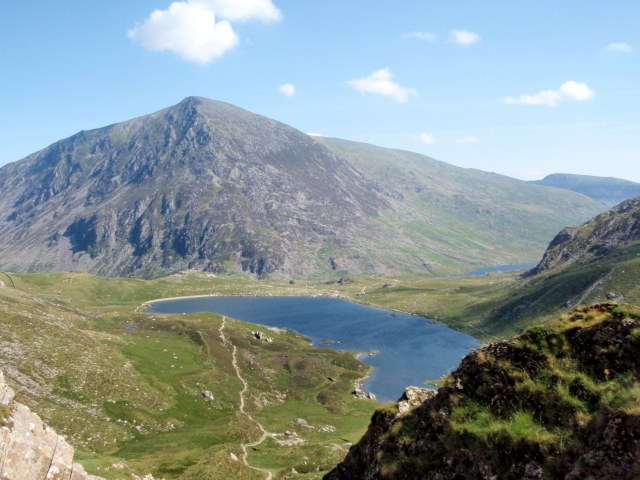 Many a good day out on the hills of the Glyderau starts off from Ogwen Cottage, and this was no exception. I took the east side of Llyn Idwal, passing under the rock climbers’ crag of Idwal Slabs (see post #87) before heading up towards Twll Du (‘The Black Hole’ but usually called ‘The Devil’s Kitchen’ by we English). Although the ascent is fairly steep in places, the constantly changing views made it enjoyable. 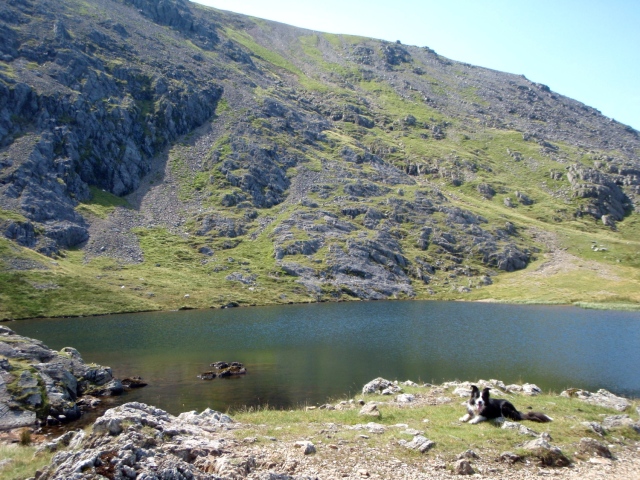 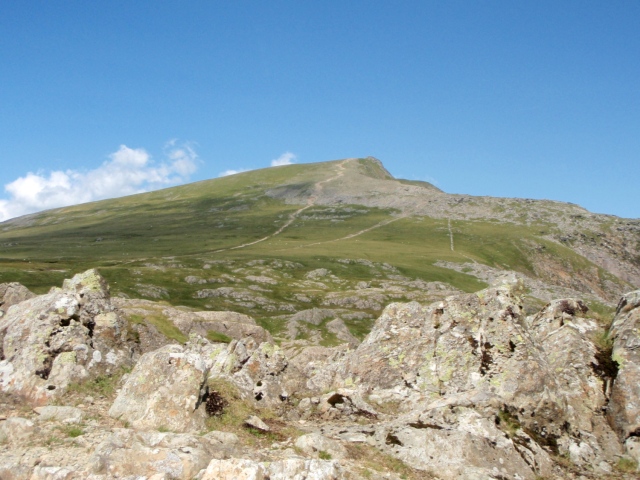 First view of Y Garn to the north

At the top of Twll Du I arrived at the small mountain lake of Llyn y Cwn (The Dogs Lake) but on this occasion I had to make do with just one dog, my constant hill-buddy, Border Collie ‘Mist’ – the great thing about walking in the hills with a dog is that they never complain, never ask for the map and never get bored posing for the camera.  Keep an eye on your lunch though! 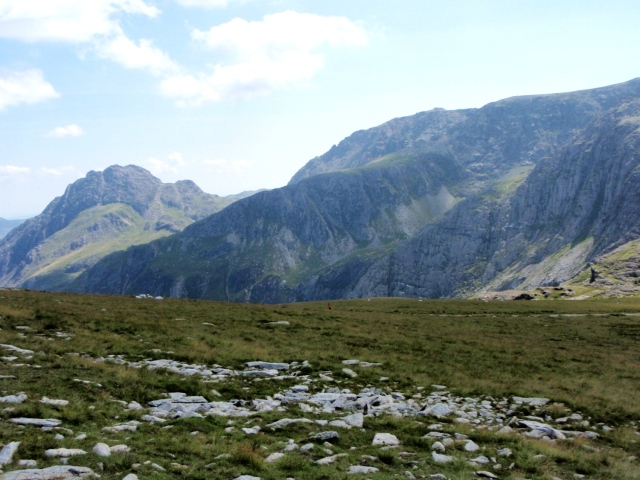 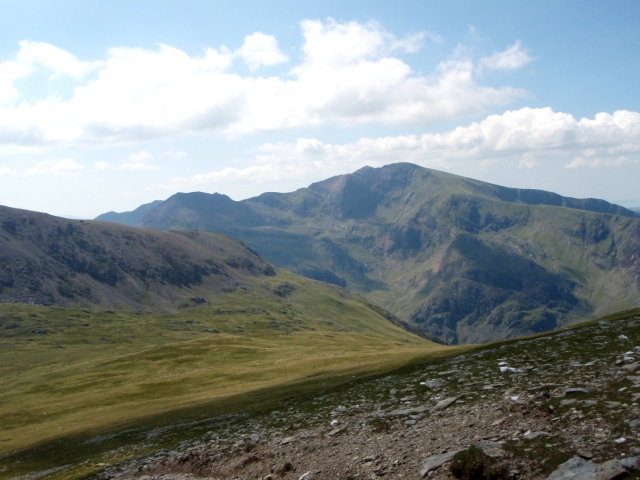 From the lake I had a good view of Y Garn (‘The Cairn’) to the north and equally good views of old friends Tryfan with nearby Bristly Ridge and a more distant view across to Cwm Glas near Yr Wyddfa (Snowdon) featured here in July (see post #154). Y Garn was the objective for today though, and on the easy walk up towards the summit my thoughts were on the tragic accident that occurred here in February 1945.

In January 1945, sixteen B-26 Martin ‘Marauder’ Bombers set off on a long flight from Florida to the USAAF base at Burtonwood in the Northwest of England. WW2 was drawing to a close, and there was little danger from enemy aircraft – the main danger was the winter weather in the North Atlantic, and the aircraft were routed via Trinidad, Brazil, Dakar and Marrakech to avoid the storms. Ironically, it was bad weather on the final leg from St Mawgan in Cornwall to Burtonwood that led to the accident on 1st February. 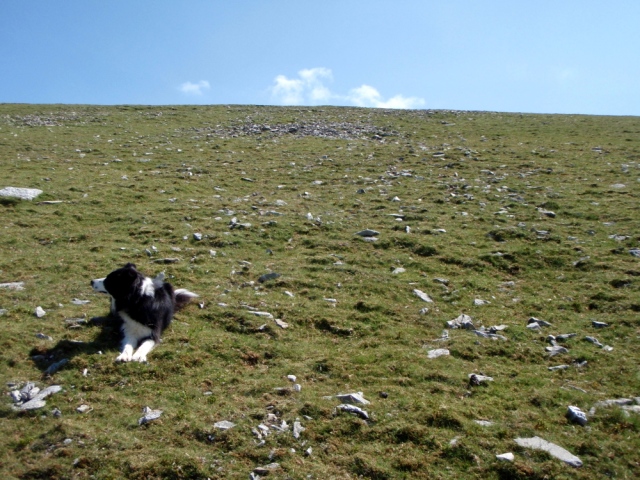 ‘Mist’ at the approximate location of the first impact 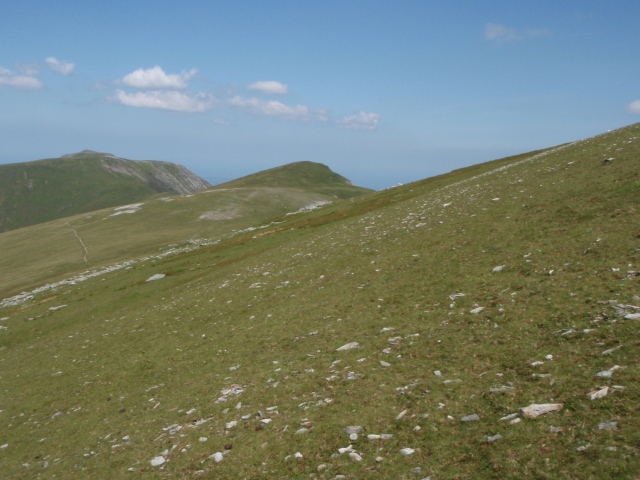 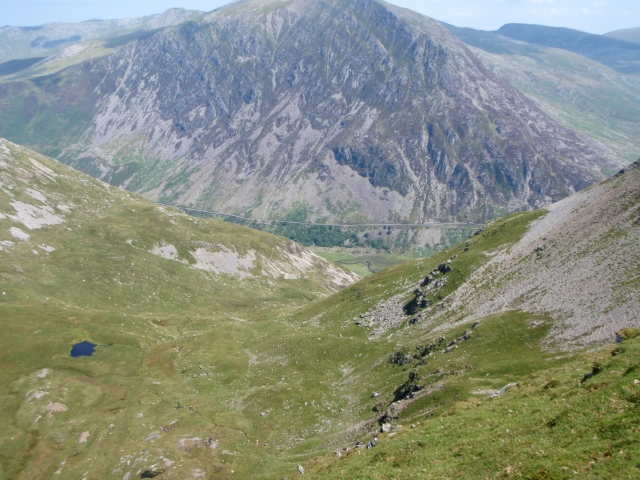 Low cloud and bad visibility sowed the seeds for the disaster, added to strong winds that pushed the aircraft off course, and instead of taking up the approach for the airfield at Burtonwood, the aircraft crashed into Y Garn, just to the north of the summit – the aircraft was only 100 kms (62 miles) from its final destination. All five members of the crew were killed instantly, and the aircraft broke in two, with part of the wreckage lying at the top of the cliffs above Cwm Cywion, and the remainder lying in the cwm below. 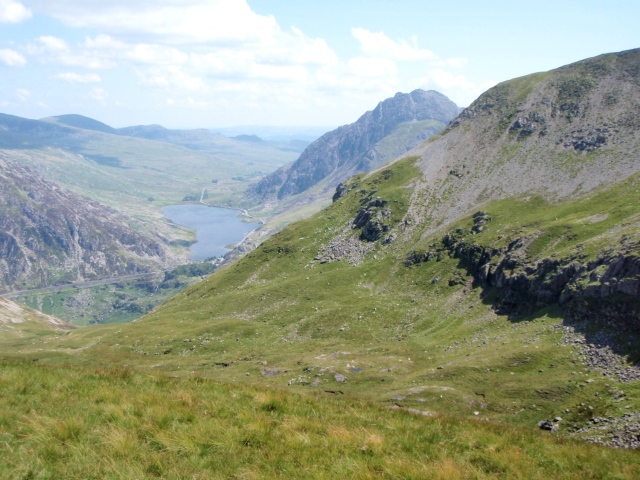 Another view of the cwm, with Tryfan and the lake of Llyn Ogwen beyond 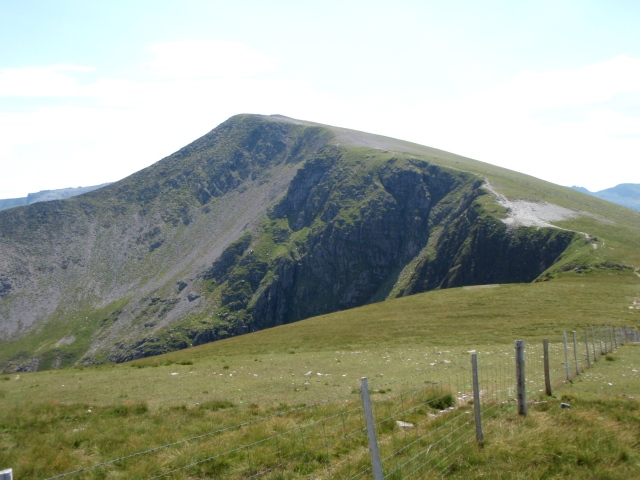 On 2nd February, the aircraft was posted as missing, and at 1445hrs the RAF Mountain Rescue Team at Llandwrog, near Caernarvon, was notified. Information had been received from a bus driver in the Llanberis Pass that a low flying aircraft had been heard in the area on 1st February, followed by the sound of an explosion. The rescue team found the wreckage at 1845hrs on 2nd February, but recovery of the bodies had to be delayed until the next day, due to atrocious weather conditions. 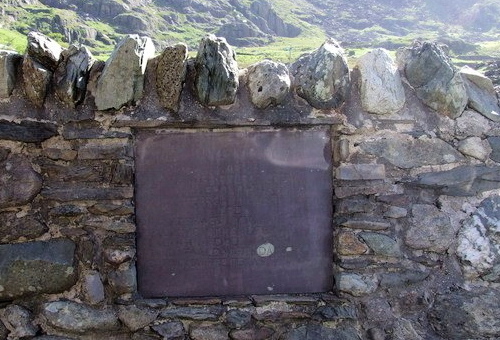 The memorial near Blaen y Nant in the Llanberis Pass 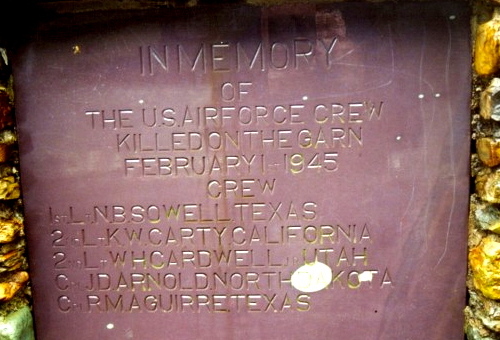 Close up of the memorial

The wreckage above the cliffs remained in place for many years, before being removed in the 1970’s, though some of the remains of the aircraft may still be found at the lower site in Cwm Cywion. In the mid-1980’s, Arthur Evans of the Snowdonia Aviation Historical Society arranged for the placing of a memorial to the lost airmen near Blaen y Nant in the Llanberis Pass. 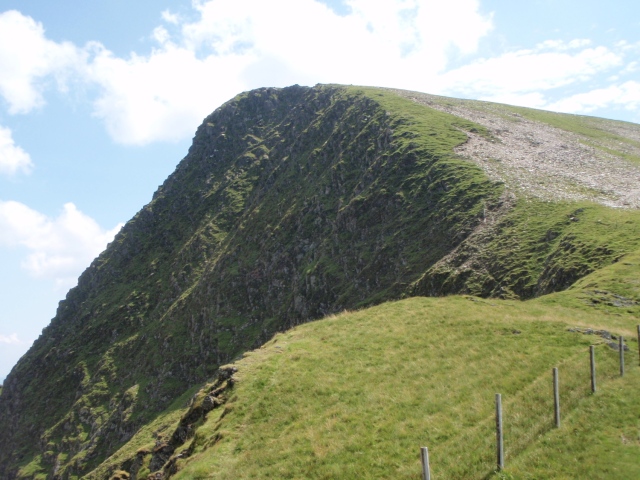 The northern cliffs of Foel Goch 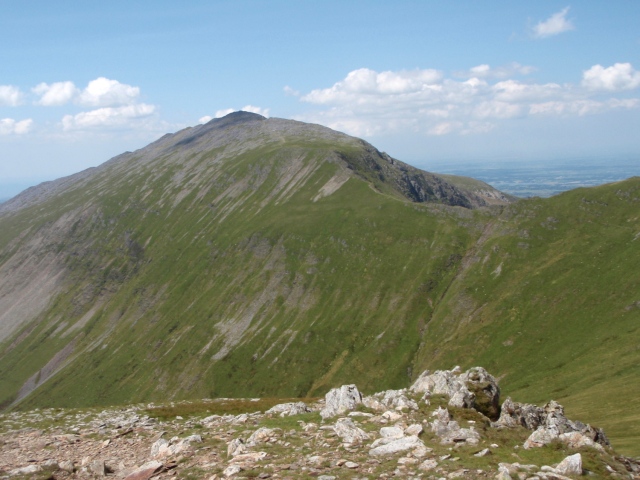 It was time for me to continue the route. The dog and I made good progress heading towards Foel Goch and Elidir Fawr (see post #90). I’d been here a couple of weeks earlier, helping with the marshalling of the Snowdon 7’s Race, where three of us had had a blustery and wet couple of hours on Foel Goch summit, but conditions today were brilliant. Elidir Fawr wasn’t on today’s menu though – I was looking for a path leaving the ridge, heading down to a high level path above the Nant Ffrancon valley. 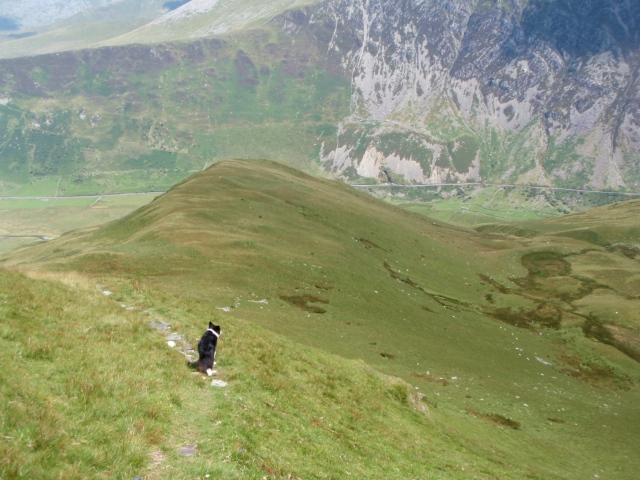 The start of the descent …. 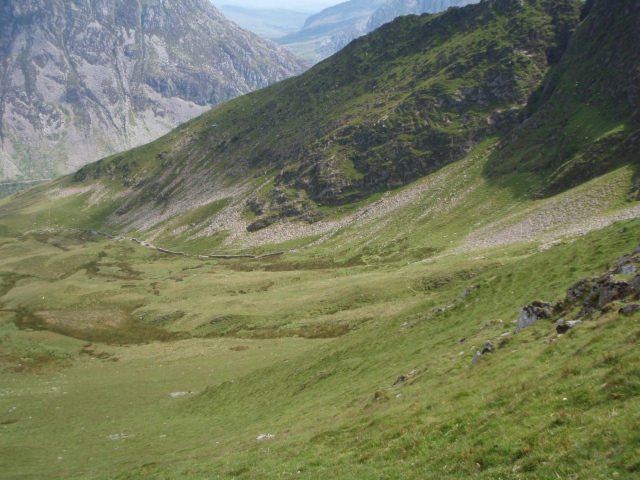 …. before heading towards the stone wall (dead centre in the photo) 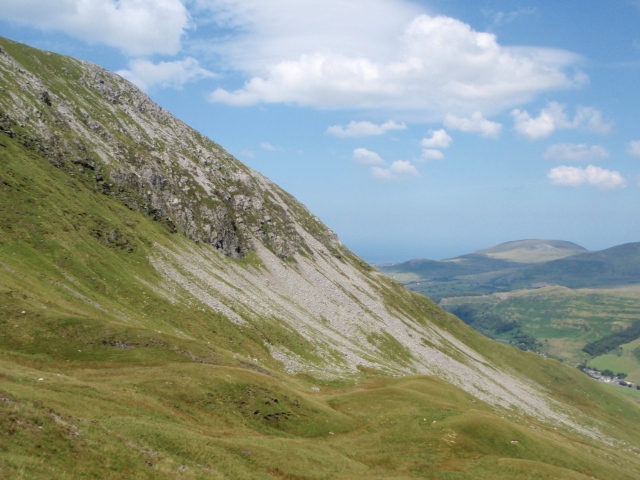 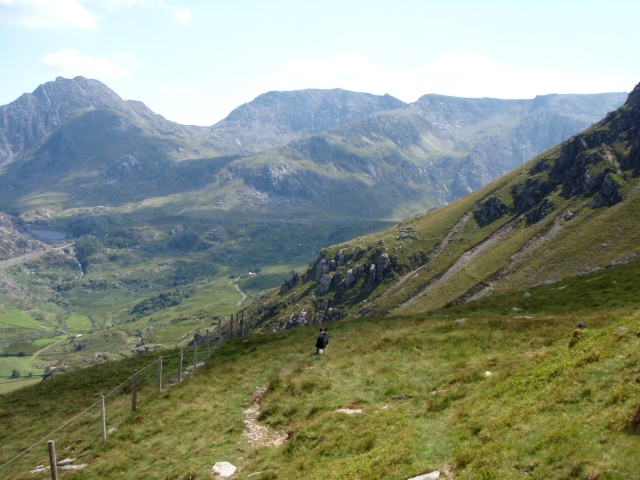 The start of the high level path back to Ogwen, with Nant Ffrancon below

Sure enough, the path turned up, exactly where it should have been. A short descent led to a right turn and a wander across the upper part of Cwm Bual to a  stone wall that made a great navigational handrail; to the left lay the cliffs of Mynydd Perfedd, where there are two more aircrash sites, one from 1943 and the other 1944, both accidents involving Avro Ansons – a total of nine lives were lost in these two separate flying accidents. 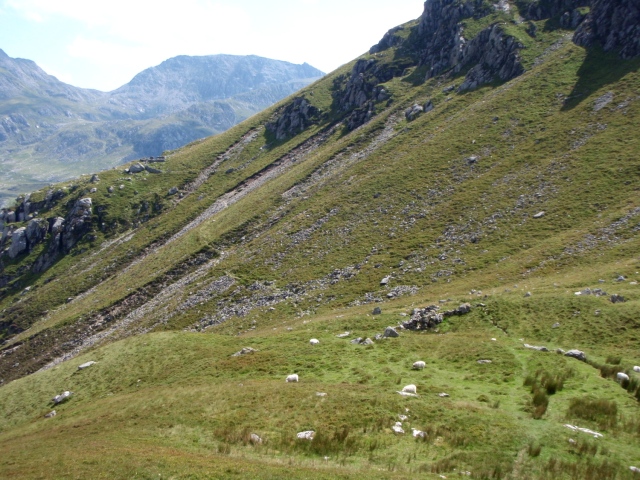 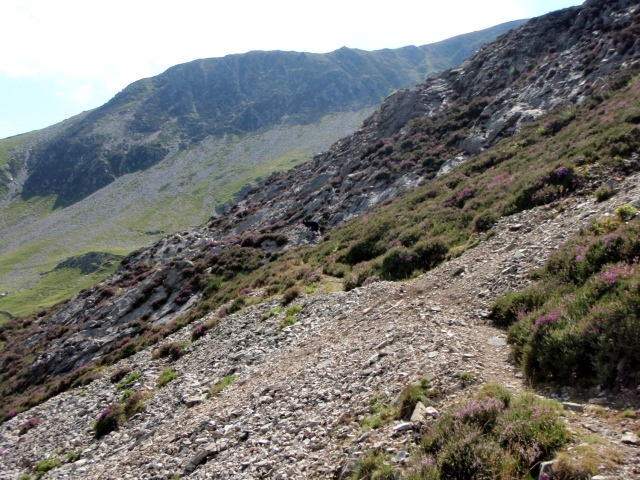 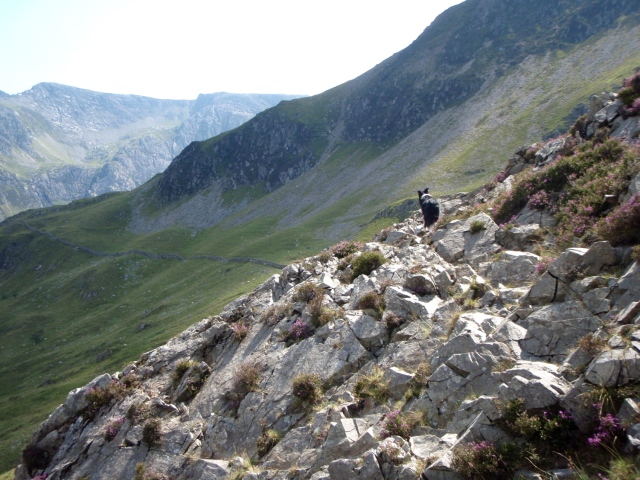 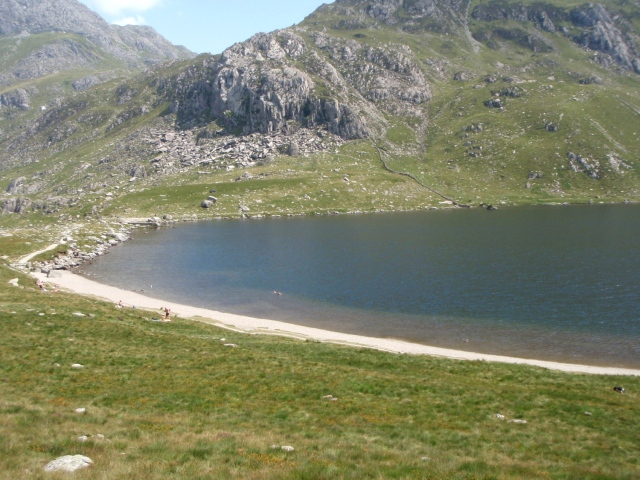 Back at Llyn Idwal, complete with beach

From Cwm Bual the high level path was easy to find and to follow, though lack of wear suggests that not many come this way. In places it was little more than a sheep track, and at times there were some nicely airy views down to Nant Ffrancon below. Before long I had picked up the worn path coming off the Northeast Ridge of Y Garn, leading the dog and I down to the shoreline of Llyn Idwal, where the warm weather had tempted several swimmers into the lake – the dog declined the offer of a swim, but settled for a paddle instead. 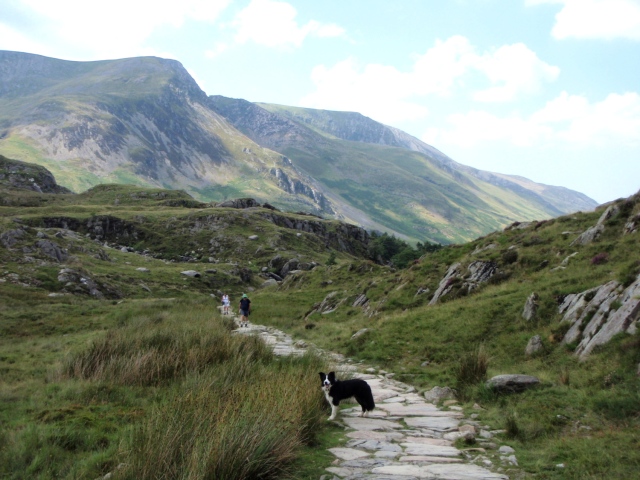 On the last leg for home

I've been mucking about in the mountains for longer than I care to mention. I started out by walking my local hills, then went on to rock climbing, mountaineering and skiing. Still doing it, and still getting a buzz. I'm now sharing the fun, through my guided walking business (Hillcraft Guided Walking) and by writing routes for other publishers, mainly Walking World and Discovery Walking Guides. Just to make sure I keep really busy, I am also currently a member of my local mountain rescue team.
View all posts by Paul Shorrock →
This entry was posted in 5. North Wales, Aircrash Sites and tagged Border Collie, Cwm Idwal, Glyderau, hillwalking, mountain rescue, mountains, photography, Snowdonia. Bookmark the permalink.