#97 – “Yomping” over Dartmoor with the Royal Marine Commandos 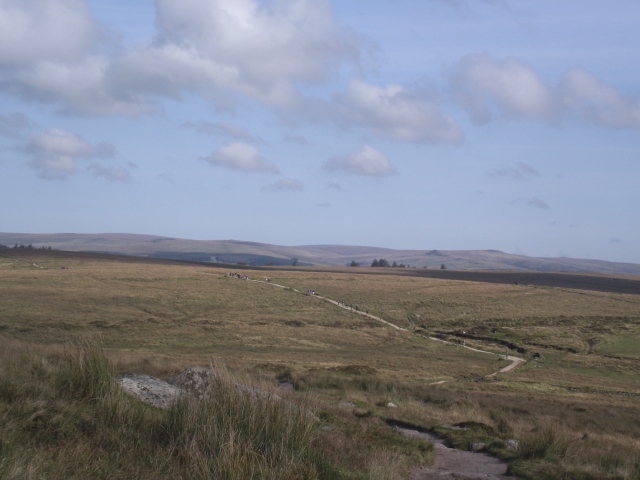 Dartmoor – on a good day!

When I first became interested in the outdoors as a teenager, I had no interest whatsoever in walking on Dartmoor – Living in Lancashire meant that we had plenty of our own moorland, and the mountains of the Lake District were just over an hour away.  In fact it took about as long to drive to Dartmoor as it did to the Scottish Highlands.  Why would I want to go to Dartmoor? 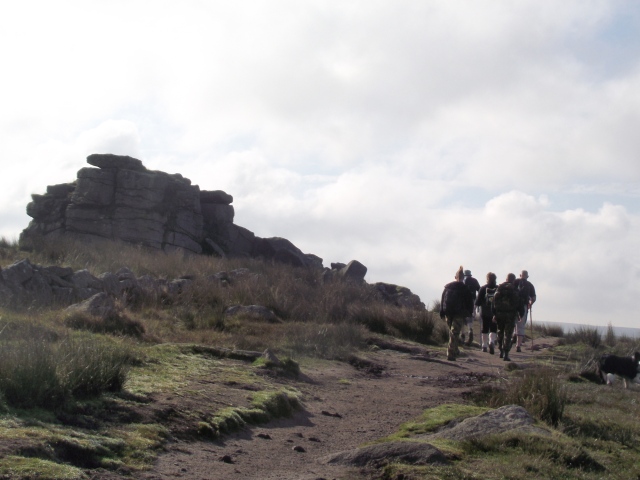 In the end, fate decided (as is often the case) that I should do some walking over Dartmoor.  At the age of 23 I joined the Royal Marine Commandos, and soon found that whoever had designed the Commando training course had a Dartmoor fetish – I soon got to know those moors very well, in bad weather and in even worse weather! 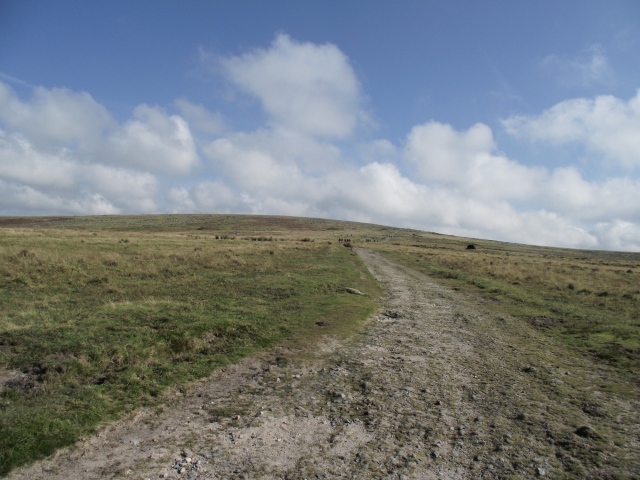 Having passed the Commando Training Course as a recruit, I thought that my Dartmoor days were over. I joined 45 Commando Royal Marines, and set my sights on Arctic Norway (see post #57).  However, a year after leaving the Commando Training Centre in Devon as a trained marine, I was back there again as a Second Lieutenant on an officers training course, doing the whole Dartmoor thing again.  Dartmoor was not my favourite place! 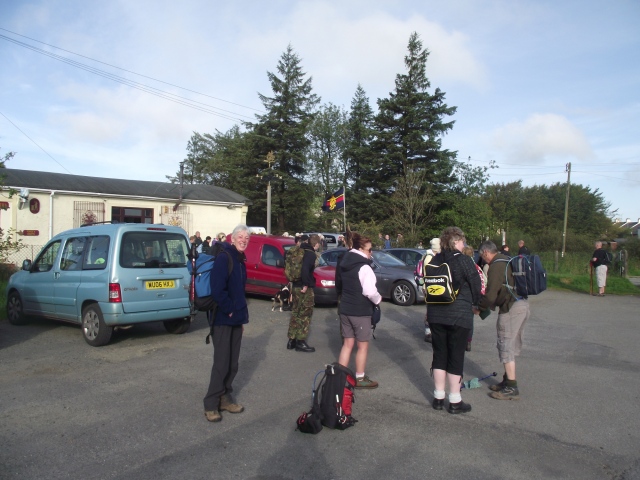 Standing around at Princetown, ready for the start

Fast forward 37 years, and I’m on Dartmoor again, only this time it’s for fun.  For the past five years there has been a charity fund-raising “yomp” (Royal Marines slang for a walk or march) over Dartmoor, that also doubles as an annual re-union.  In marines parlance, ‘re-union’ equates to ‘drinking session’, and after a pre-walk practice in the bar the night before, I’m standing at Princetown on Dartmoor ready to yomp 20 kms to Bickleigh Barracks, the home of 42 Commando Royal Marines.

Just after the start, with Border Collie ‘Mist’ herding the ‘yompers’ across the moor

We started out in ‘syndicates’ of about ten walkers, but by the time we reached South Hessary Tor it became obvious that the three backmarkers of the group were about to join the syndicate five minutes behind us, and that there was no way that we were going to keep up with the two youngest members of the group – Adam and Mark were setting a cracking pace, as well they might at forty years younger!

Chris and Mick striding out across the moor

The field began to settle down, and as we reached Nun’s Cross Farm, Chris and I plus Border Collie ‘Mist’ had joined up with Mick.  The last time I had been at Nun’s Cross had been on a pitch-black rainy night, with a heavy pack and a rifle, but today it all looked very benign.  It came out in the course of conversation that Mick had joined the marines about the time that I had left, and had spent all his working life in military service.

Mick and Chris, under the watchful eye of ‘Mist’

Approaching the checkpoint near Gutter Tor ….

…. with the following syndicate closing in 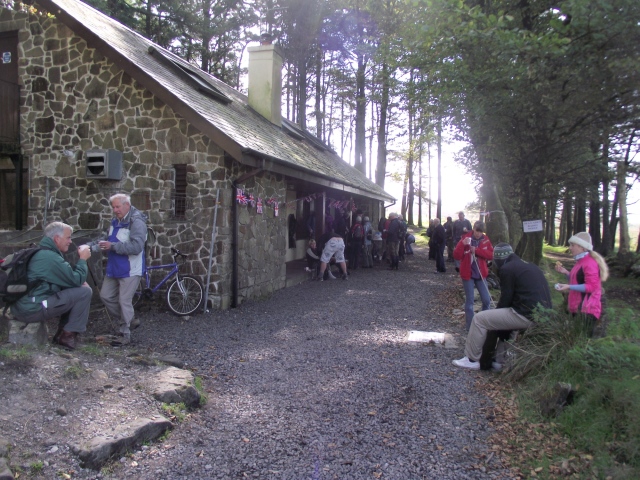 A quick break at the checkpoint

As we approached one of the safety checkpoints near Gutter Tor, the group behind were closing in on us – the ‘Yomp’ isn’t a race as such, but Mick had pointed out that the early finishers had first pickings at the bar and the showers – we didn’t delay long at the checkpoint.

Gutter Tor – small but nasty when the weather is bad

Approaching the checkpoint near Ringmoor Cottage

The game soon became tactical – Mick has done all of the previous yomps, and knew that by contouring round the next bit of moor we would save some time.  Sure enough, we were soon back in pole position, not that it was a race of course!  By the time we reached Ringmoor we were back near the head of the field.

Setting out on our last bit of ‘The Moor’ …. 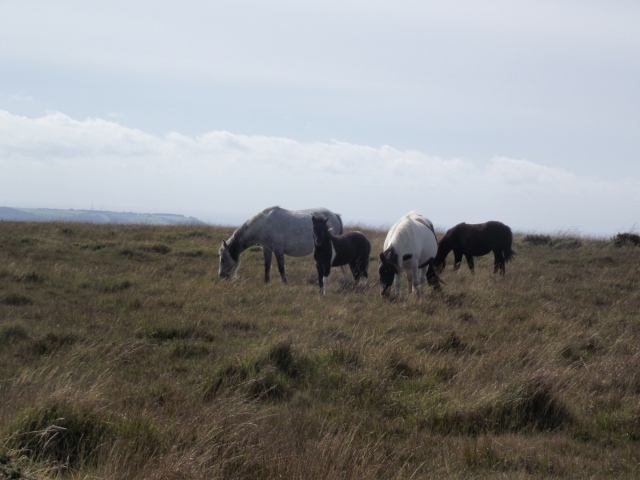 …. passing some of the local residents …

…. with the youngsters still ahead, but Chris and Mick close behind

Off the moor, and on the cycleway following the old railway line

After Ringmoor it became obvious that that Mick was having problems – it came out in conversation that he had been injured in an explosion whilst on active service in Kosovo, resulting in a serious knee injury.  Instead of whinging like a professional footballer, Mick gritted his teeth in true commando style and kept the pace going off the moor on the final leg to Bickleigh Barracks.

Mick, the author and ‘Mist’ back at Bickleigh after a brisk 20 km ‘yomp’ over Dartmoor

Back at the Sergeants Mess at Bickleigh 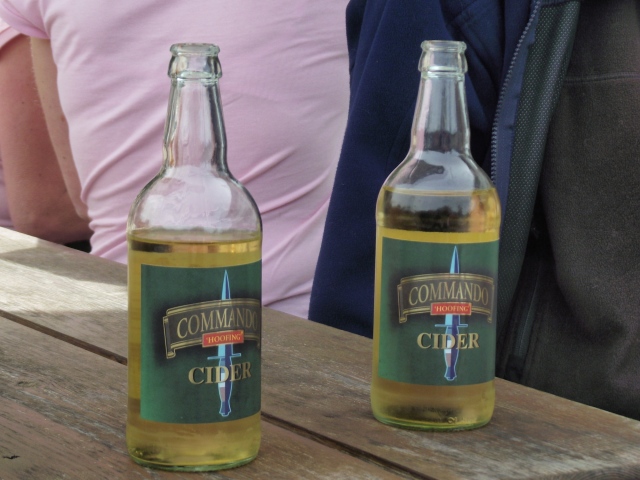 The reward at the end of the walk

The welcome at Bickleigh was a warm one inn every sense, and the walkers were all guests of the Sergeants Mess – just the place for that ‘other’ Royal Marine activity!

p.s.  The day after these photos were taken a storm engulfed much of the country, including Dartmoor – standing upright would have been difficult, and ‘yomping’ almost impossible.

I've been mucking about in the mountains for longer than I care to mention. I started out by walking my local hills, then went on to rock climbing, mountaineering and skiing. Still doing it, and still getting a buzz. I'm now sharing the fun, through my guided walking business (Hillcraft Guided Walking) and by writing routes for other publishers, mainly Walking World and Discovery Walking Guides. Just to make sure I keep really busy, I am also currently a member of my local mountain rescue team.
View all posts by Paul Shorrock →
This entry was posted in 7. Everywhere Else! and tagged Dartmoor, hillwalking, photography, Roysl Marines. Bookmark the permalink.