#102 – Arenig Fach – Another Welsh mountain gem (or should that be a rough diamond?)

Arenig Fach seen from the east

It seemed like a good idea.  Six weeks earlier Chris and I had walked Rhinog Fawr (post #95) and after being seduced by a forecast of fine weather, I had gone out two days later and walked a much longer route based on Rhinog Fach (post #96).  Then, six weeks later we had another good day on Arenig Fawr (post #101) and again a favourable weather forecast tempted me to ‘go for it’ and to return the day after for Arenig Fach. 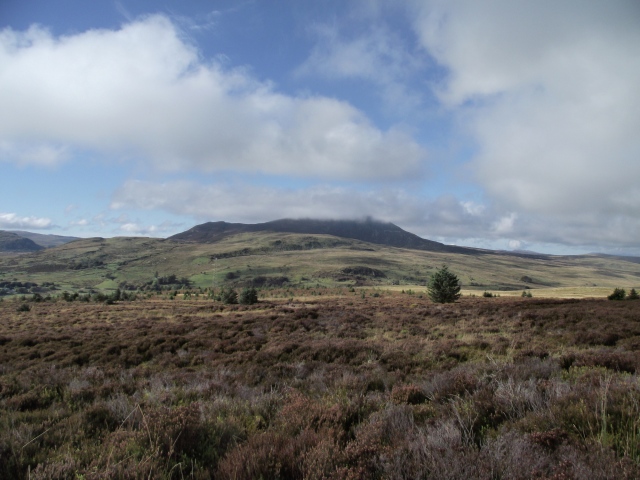 Arenig Fach with a cap of cloud on the summit …. 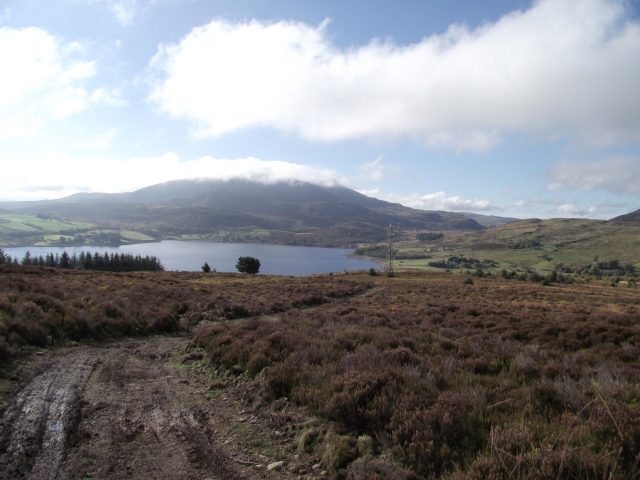 …. and Arenig Fawr with the same

The route was one of the series being researched for the Discovery Walking Guides project, and ‘Plan A’ had been a walk of 11 kms (7miles) and 550m (1800 ft) height gain, a route that Chris would join me on.  However, the more I looked at the map, the more the terrain reminded me of the moors of the Pennines, the moors of my youth where I first started my walking and mountaineering.  A little voice kept saying “Chris wouldn’t enjoy this” – fortunately I listened to what the little voice was saying.

The cloud starting to lift from Arenig Fach …. 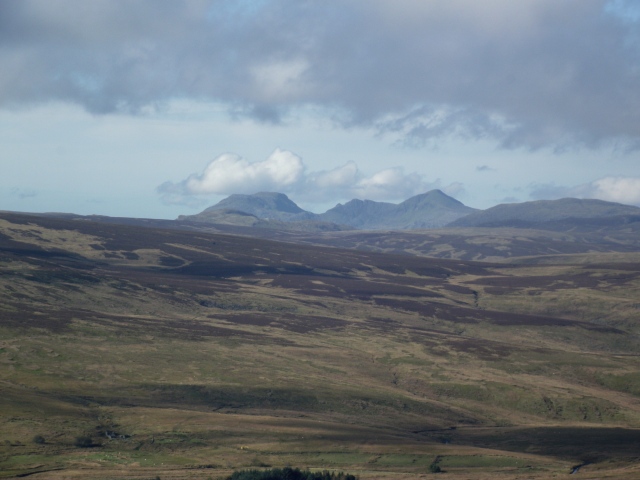 …. and also from the distant Moelwyn hills

Unbeknown to me at the time, the little voice probably prevented a divorce!  ‘Plan B’ was formed – a solo walk (with the dog, of course), but as Arenig Fach was almost 200 metres (650 ft) lower than Arenig Fawr, I decided that I would make things more ‘interesting’, and increased the walk to 20kms (12 ½ miles) and 900 metres (2950ft) height gain.  I fully expected this to be fairly rough walking, but the early part of this was on what appeared on the map to be a well-defined track. 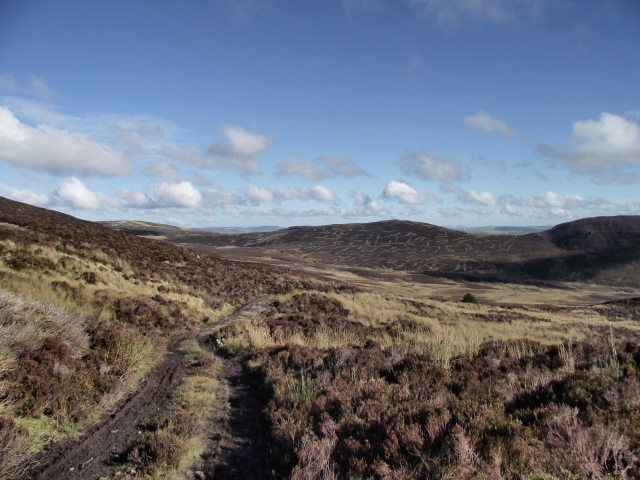 View from the track, towards Craig yr Hafod 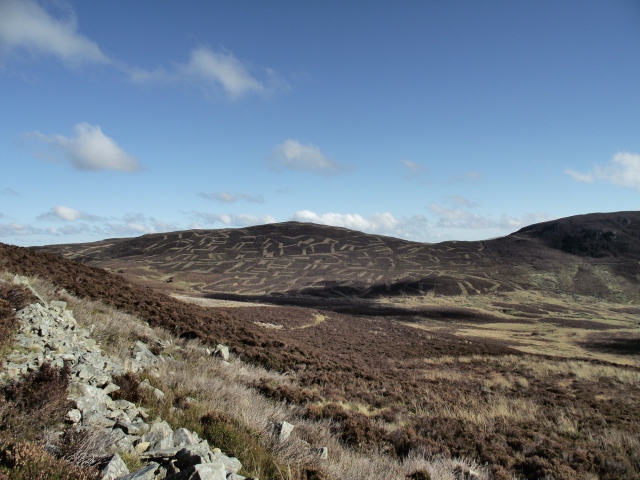 Well-defined wasn’t the half of it!  I could have driven our Landrover Freelander all the way to the first peak of Carnedd y Filiast (“Cairn of the Greyhound Bitch”) but that would have been cheating.  The track did allow rapid progress and height gain however, and although at one stage I lost the panorama of the final objective of Arenig Fach, I was treated instead to the almost surreal view of Craig yr Hafod (“Crag of the Summer Dwelling”) with its weird haircut resulting from heather management.

From Carnedd y Filiast it looked a long way to Arenig Fach (‘Little Big Ground’).  ‘Mist’ had a giddy five minutes, running round the hillside at full speed, as if in hunting mode, whilst I had my fun taking photos of the Snowdon Range and Tryfan, about 25 kms away.  Arenig Fawr still looked a long way off, however. 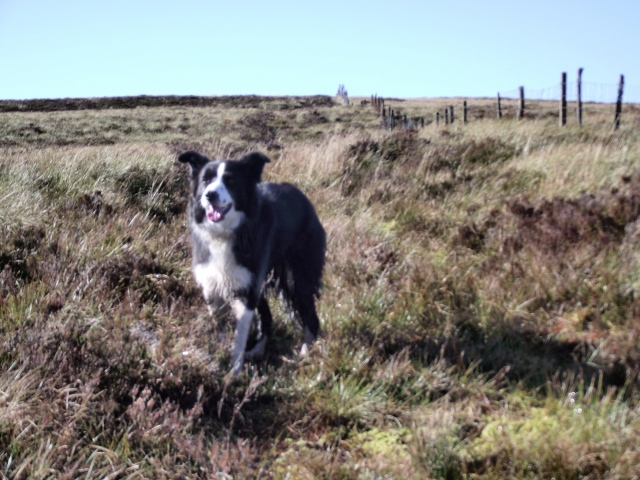 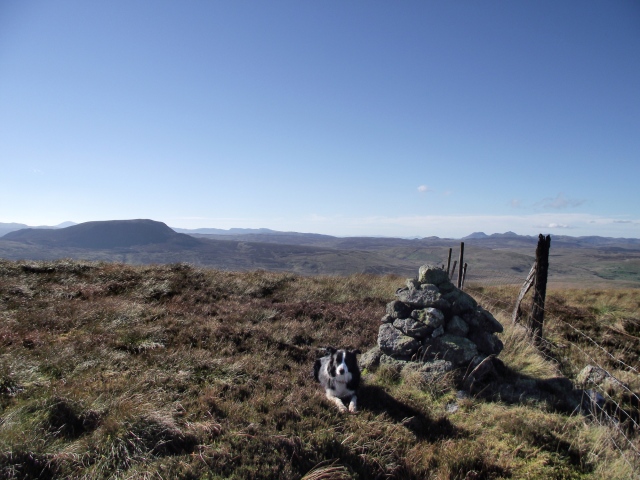 ….and chilling out after a good run 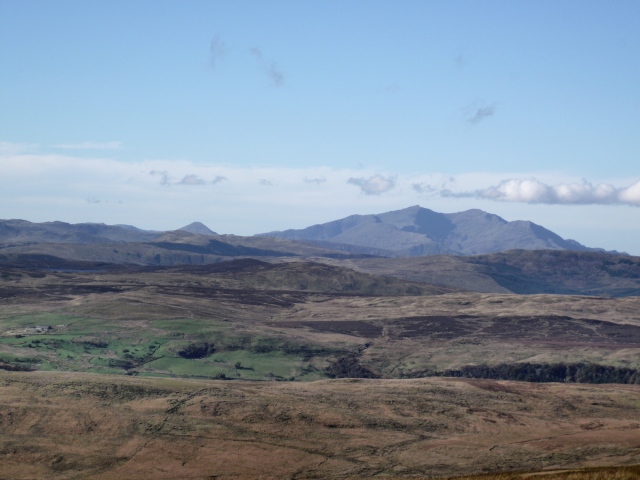 View of the Snowdon range, about 25 kms away 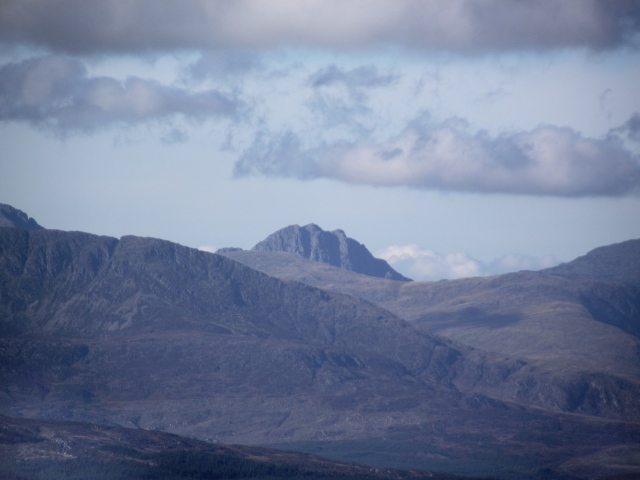 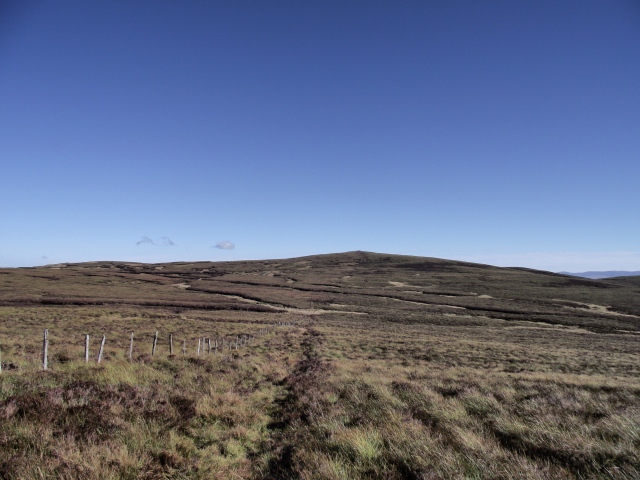 The view back to Carnedd y Filiast, showing the easy walking terrain ….

…. and Arenig Fach,… still looking a long way off!

A long and gradual descent brought me down to the Afon Gelyn (River Holly).  This became increasingly more wet, though the worst of it could be avoided.  The crossing of the stream was easy enough, and on the other side my boots were still just damp rather than wet – that was about to change though! 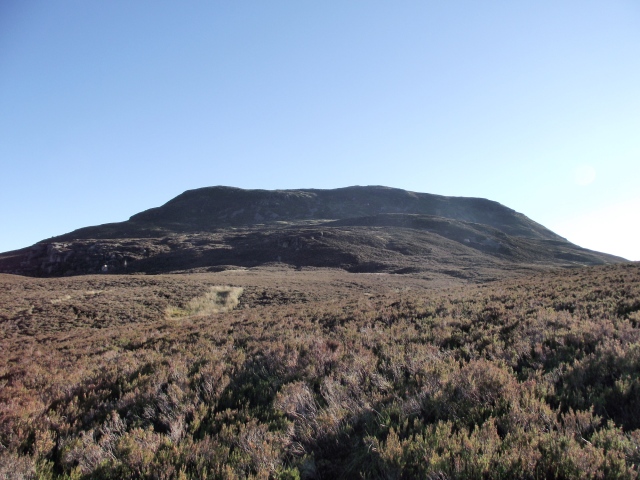 On the other side of the stream, with 2 kms of dense heather ahead

After 2 kms of heather, the fence to the summit

Arenig Fach lay ahead, but with 2 kms of gradual upwards slope ahead before the final ascent.  Unfortunately that 2 kms was either wet sphagnum moss or dense heather, occasionally both together.  Although the heather was tiring, it was drier underfoot, but progress was slow, with the 2 kms taking about an hour – ‘Mist’ is at the upper end of Border Collie sizing at 19 kgs, and she made good use of her height and muscle to bulldoze through the thick vegetation.

Panorama of the hills of Snowdonia, from the Moelwyns (left) through the Snowdon Range, The Glyderau, The Carneddau, The Clwydian Hills and beyond (Click the image for a zoom view)

The heather slope finally flattened out to a broad col, with a fairly steep section on the left to the summit, whilst to the right a long heather moor stretched out towards the hills of Snowdonia from the Moelwyns to the Carneddau, and beyond to the Clwydian hills.  So, left it was then.  The ascent was untracked, but a wire fence pointed in the right direction so I followed that most of the way.

The summit shelter was impressive enough for a summit that appears to be visited infrequently – paths were just about non-existent.  An ancient cairn named Carnedd y Bachgen (“Cairn of the Boy”) appears to have been plundered to build the shelter, and nearby a more recent cairn of the same name pointed the rough line of descent.

The line of descent towards Llyn Celyn

From there my old friend the fence gave a better line towards my start point at Llyn Celyn (“Holly Lake”) with a view back to the crags above Llyn Arenig Fach.  The afternoon was getting late by now, and the view to the crag and small lake was already obscured by shadow as the sun dipped. 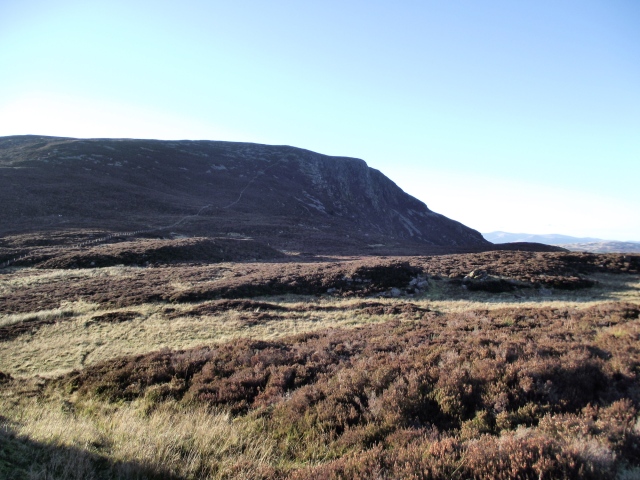 The view back towards the crags above Llyn Celyn

A lengthy descent took me down to the start point, after what had seemed like a long day.  Arenig Fach might be the ‘small’ Arenig, but this gnarly little hill punches well above its weight!  I’m glad I did it, in the way that it’s nice to have the full set, but it is probably a hill that I won’t be visiting a lot in the future.  If you are after peace and solitude though, Arenig Fach is a little rough diamond near the gem of Arenig Fawr.

Text and images © Paul Shorrock except where indicated otherwise.  The image by Peter Aylmer is taken from the Geograph project, and reproduced under a Creative Commons Licence.  You will find more fine images by Peter here.

15 Responses to #102 – Arenig Fach – Another Welsh mountain gem (or should that be a rough diamond?)