It’s not often you can have a skiing day in Snowdonia in November – it’s probably such a rare event that it just doesn’t happen.  It didn’t happen last weekend either, but the next best thing did – a ski-mountaineering promotion day at Plas y Brenin, organised by the British Section of the Austrian Alpine Club and free to members.  Well, what’s not to like about that then? 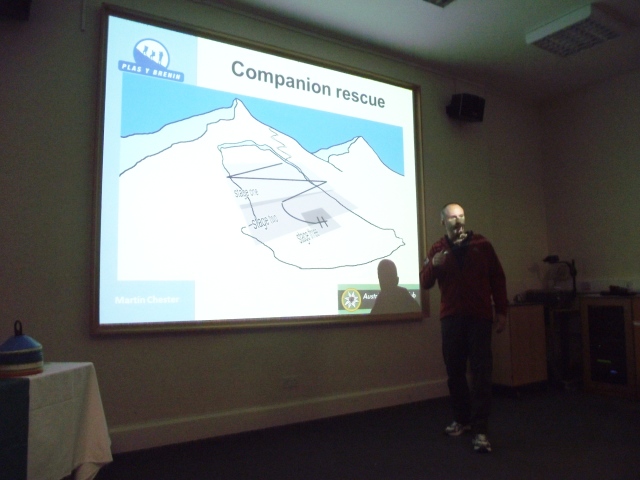 In the classroom – talk and demonstration on avalanche transceivers 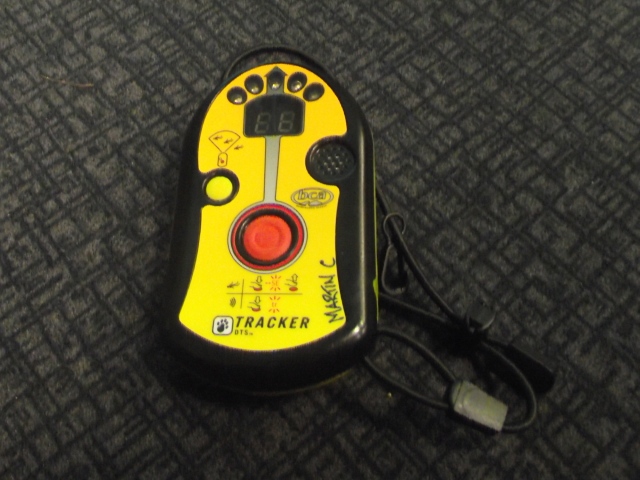 I like going to Plas y Brenin, the National Mountain Centre for England and Wales, and the spiritual home of British mountaineering.  The course instructors were all experienced qualified Mountain Guides, and we started the day with Martin, learning how to locate companions using avalanche transceivers (radio beacons).

Learning how to rig a crevasse rescue for a skier

Stuart explains the finer points of crevasse rescue in detail

Classroom again, but outside this time

I’ve used transceivers before, but revision is always a good thing.  In the warmth of a classroom it was easier to get to grips with the subtle nuances of using these devices.  Basically they transmit a signal all the time, but if a party is avalanched those not buried by snow can switch the device to receive, to locate missing party members.  It’s one of the few mountain emergencies where minutes can literally make the difference between surviving or not.

Paul demonstrating self-rescue from a crevasse 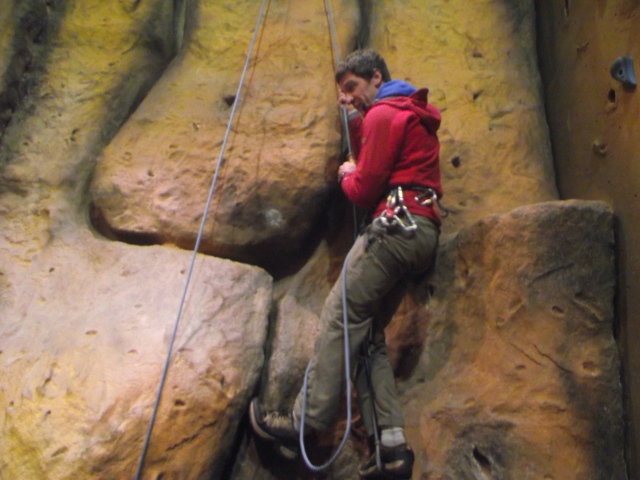 After lunch it was outside for a while.  The Snowdon Horseshoe was looking rather wintery, but back at Plas y Brenin Stuart had us hauling skiers out of a crevasse – as we didn’t have a real one, we had to make do, but the principle of ‘how to do it’ is the important thing.  The last session was with Paul, practicing self rescue from a crevasse.  Most of us had previous experience of these techniques, but as with the transceivers a bit of revision is a good thing.

The author ‘somewhere’ in the Cairngorms 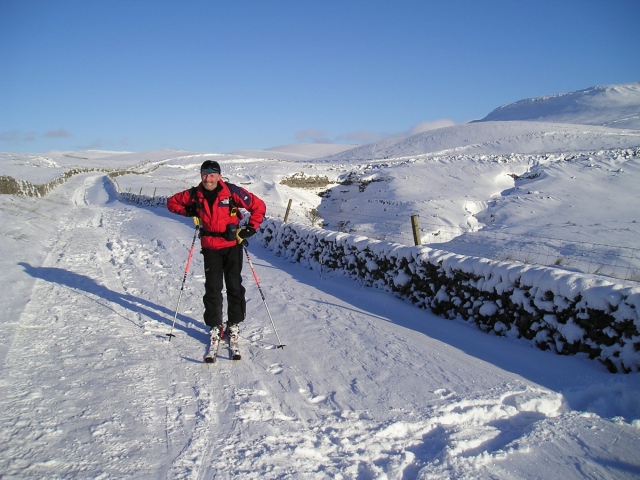 We certainly didn’t have transceivers when I started ski-mountaineering in the late 1970’s.  Most of these early trips were in the UK, either to Scotland, the Lake District or the Pennines.  Skiing in the UK is an acquired taste, but I’ve had some really good days.  The ultimate skiing experience though is to be found abroad.

The author skiing in the Chamonix Valley – the obvious glacier in the distance just right of centre is the Mer de Glace, the lower section of the Vallée Blanche descent

The most famous off-piste ski run in the world is the Vallée Blanche in France.  A two-stage cable car takes you from Chamonix to the Aiguille du Midi at an altitude of 3842 metres.  From there a precarious descent on foot down a snow arête leads to the start of the skiing.  This descent is the most dangerous part of the day, as a slip here leads to a 2000 metre drop on one side, with a shorter but equally dangerous drop on the other side.

A busy day on the snow arête 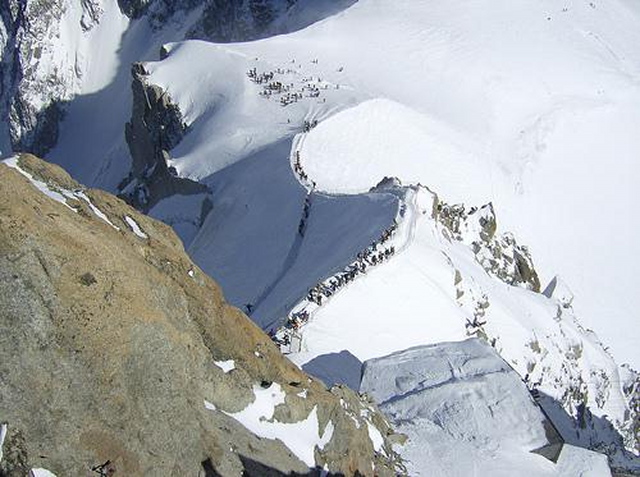 Looking down on the arête from above 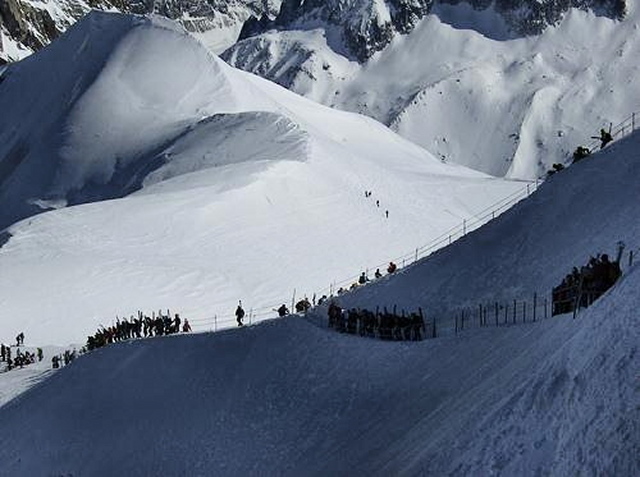 The final section of the arête

More people die here than on the remainder of the route – having said that, the arête is easy by mountaineering standards, especially wearing crampons.  Most skiers don’t have crampons however, and rely instead on grabbing the safety rope that is sometimes in place – consequently the arête is packed with ‘gripped’ (frightened) skiers wearing smooth soled boots, the lucky ones being roped to guides.

On skis at last

Once off the arête the fun starts – the Vallée Blanche is in the region of 20 kms in length (13 miles) with a vertical descent of 2800 metres.  Although it is usually a technically easy run, the route follows a crevassed glacier and each year people die after falling into a crevasse.  Guides can be hired, and are essential for all but the most experienced skiers carrying full self-rescue kit.

The author near the start of the Vallée Blanche 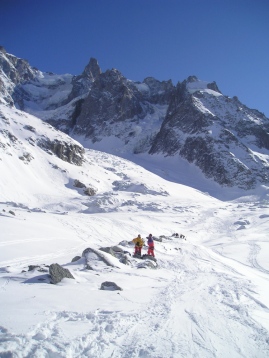 Lower down, passing through great scenery

Great views, all the way ….

…. and a feeling of wide open spaces

Having pointed out some of the dangers, it has to be said that the Vallée Blanche is within the capabilities of most recreational skiers who can manage a red run comfortably – it’s certainly an unforgettable experience, and I’ve done the run half a dozen times.   I’m not ready to do it without a guide yet, but the stuff we practiced at Plas y Brenin is a good insurance policy for skiing off the beaten track, away from the crowds.

p.s. As we practiced rigging our crevasse rescue, things were brewing about 6 kms away from Plas y Brenin – Ogwen Valley Mountain Rescue Team were on their first job of four that day, starting at midday and finally standing down at one o’clock the next morning.  Do them (and yourselves) a favour, and stay safe this winter. 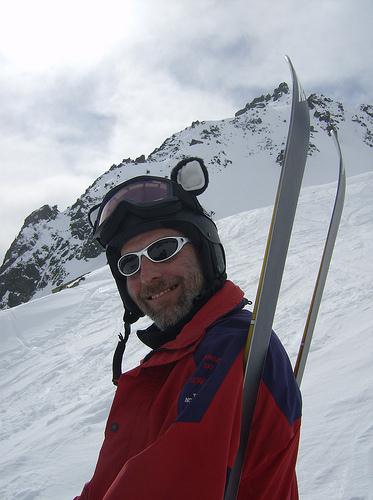 I've been mucking about in the mountains for longer than I care to mention. I started out by walking my local hills, then went on to rock climbing, mountaineering and skiing. Still doing it, and still getting a buzz. I'm now sharing the fun, through my guided walking business (Hillcraft Guided Walking) and by writing routes for other publishers, mainly Walking World and Discovery Walking Guides. Just to make sure I keep really busy, I am also currently a member of my local mountain rescue team.
View all posts by Paul Shorrock →
This entry was posted in 5. North Wales, 7. Everywhere Else! and tagged Chamonix, mountaineering, mountains, photography, skiing, Snowdonia, Vallee Blanche. Bookmark the permalink.

9 Responses to #103 – Ski mountaineering in Snowdonia – in November?!!