#104 –A short jog over the Pennine Moors! – ‘Spine Race’ training weekend in the Yorkshire/Lancashire Pennines

By any stretch of the imagination, completing the Pennine Way on foot is going to be a challenge.  It’s 268 miles (431 kms) of rough, boggy terrain along the backbone of England, exposed to the worst weather that an English summer can throw at you, walking for about 2 ½  weeks.  Some people add to the fun by backpacking, carrying their shelter and food with them.  If that sounds too easy there’s always the ‘Spine Race’ – carry all your gear, do it in 7 days and do it in winter!

“The Spine is Britain’s most brutal race. The longest, coldest and most demanding mountain marathon in Britain.”  Well, that’s how it’s described on the ‘Spine Race’ website, and having assisted in one of the safety teams on the first event in January 2012, I’m not about to disagree.  A field of 15 starters was eventually whittled down to 3 finishers, following a war of attrition in which the athletes competed against foul weather and their own protesting bodies. 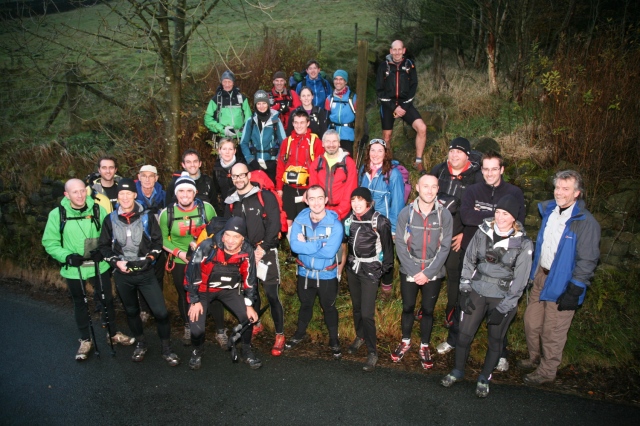 The first ‘Spine Race’ proved to be a test of determination and heroism by all the competitors, not just the finishers (see posts #61 and #62).  Faced with a possible four-fold increase in entrants for the 2013 race, the organisers decided to run a training event, giving entrants a chance to try out their gear, and to find out what running 40+ miles a day over rough terrain feels like. 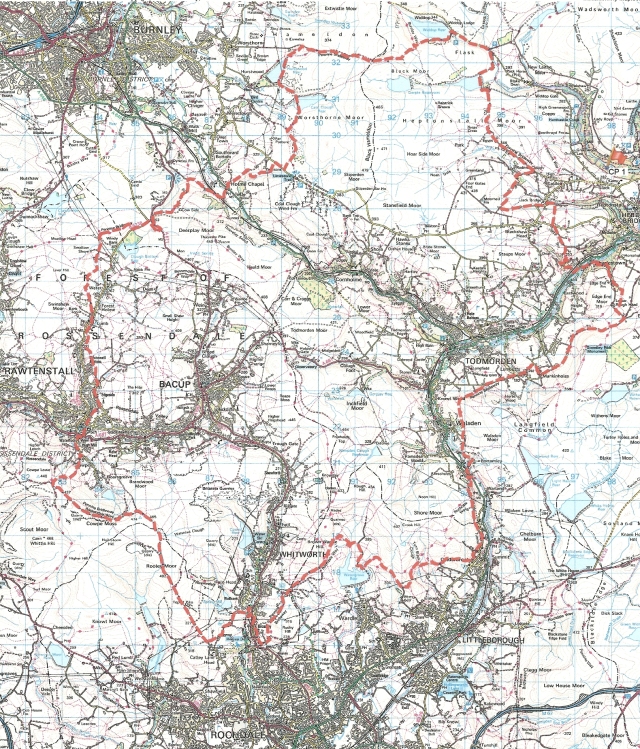 A more detailed view of the course – click to zoom

To keep things interesting, the event would be a course of over 45 miles (70+ kms) in November, crossing over (you guessed it) typical Pennine moorland.  Checkpoint 1 near Hebden Bridge gave access to the start point on the nearby Pennine Bridleway, and not long after daybreak on a gloomy Saturday morning, the field of 24 athletes set off for a long, hard day. 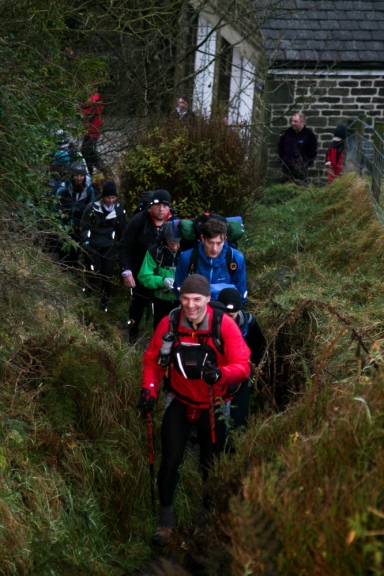 Gary Morrison, joint winner of the first Spine Race, leads the pack from the start (JB) 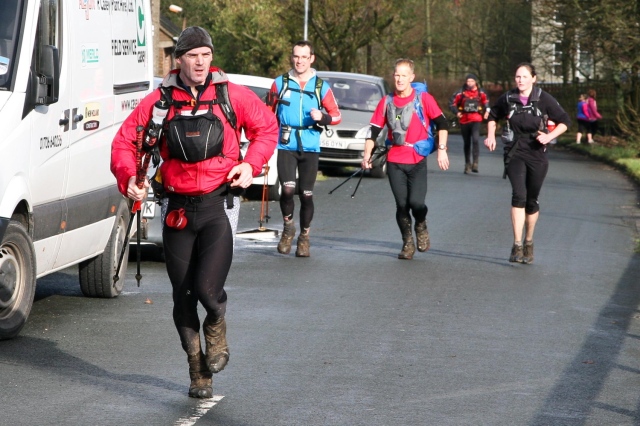 In the meantime the support staff, predictable as ever, went back to Checkpoint 1 for a second cup of coffee, before setting out by road to catch up with the happy band – by late morning all the runners had passed through a kit check, where their compulsory equipment,  including stove, shelter, sleeping system and other required items,  was given the once over by members of the support team.

At the kit check near Rawtenstall (JB)

Early in the event, but the Pennine mud is much in evidence (JB) 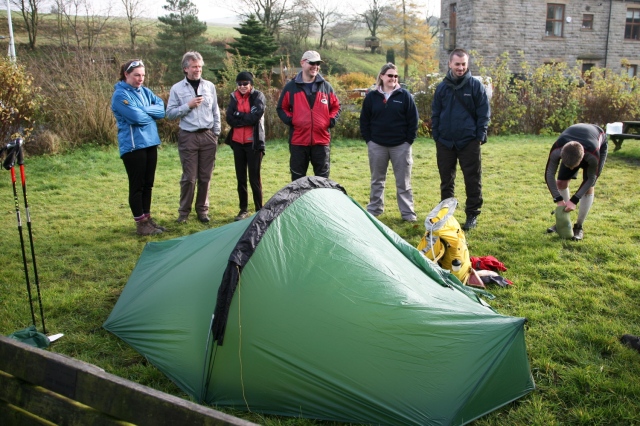 Compulsory race equipment being examined by the support team (JB)

Then it was back on the hill for the athletes, and back on the road for the support team in an attempt to drive round the moors to pick up the front runners again.  Our team took the reverse route from near Littleborough, heading across the moors towards Whitworth, passing several groups of runners as we headed into the dusk. 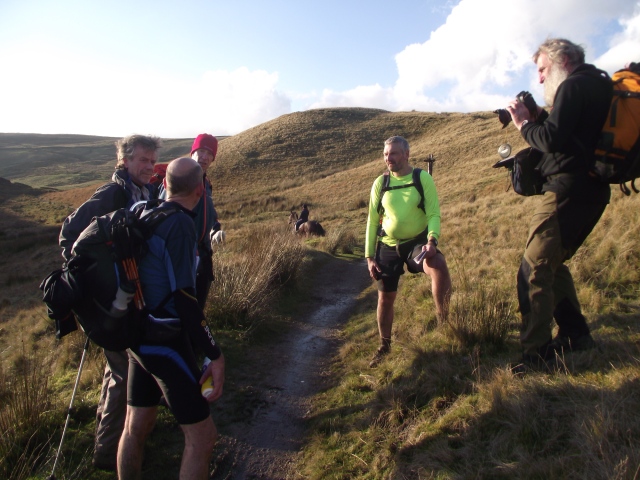 On the moors between Littleborough and Whitworth 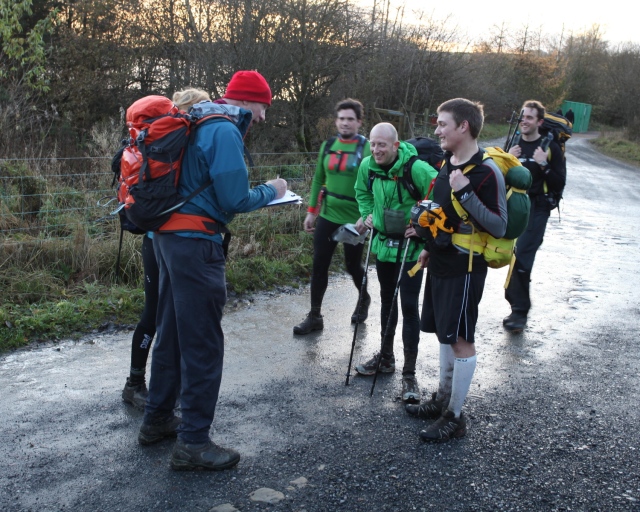 Checking the competitors as they pass the opposite way (JB)

The light starts to fade …. 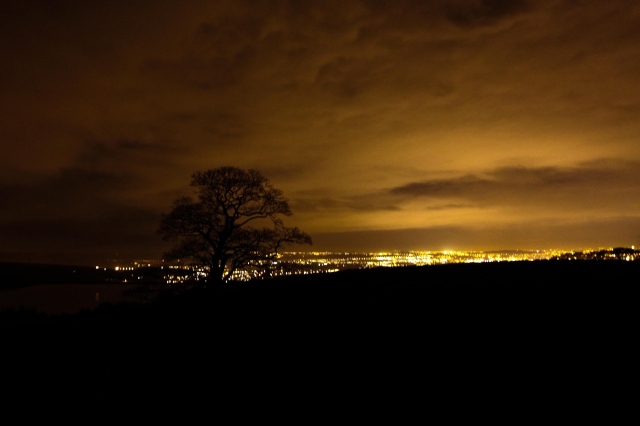 …. and night falls over Rochdale in the distance (JB)

When the time came to head back it was dark, which suited me fine – there’s something ‘other worldly’ about walking in the dark, and the lights of Rochdale in the distance contrasted with the peace and quiet of the moor at night.  17 kms walking, and a surprising 470 metres total height gain, saw us back at the cars, ready for the drive back to Checkpoint 1.

Runners arrive back at the checkpoint …. (JB) 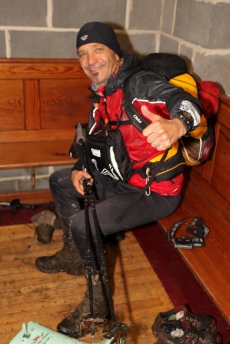 …. including Guido from Switzerland …. (JB) 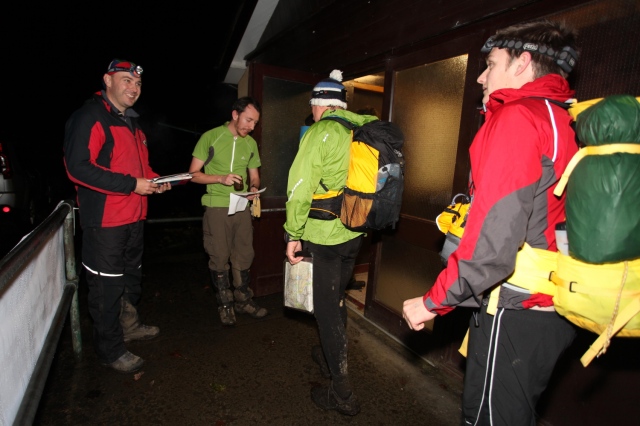 …. to be checked in by the support team (JB)

Back at the checkpoint, some of the field had already arrived, and the new arrivals barely had time to get through the door before a plate of pasta was thrust in front of them by super-chef Vicki.  It had been a long hard day, with lessons learned by the athletes and by the support team.  As I write this, the 2013 Spine Race is only 8 weeks away – if the last race was any indication, it will be a challenging week for all! 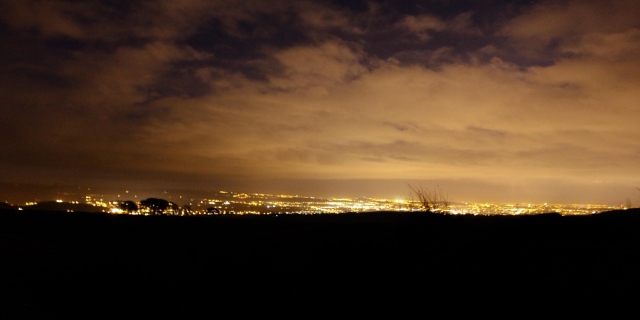 Night panorama over the moors of Lancashire (JB)

p.s. You can read more about the Spine Race at – http://www.thespinerace.com

p.p.s.  Just before posting this, it was announced on the news that we might be in for the coldest winter in the UK for 100 years – that could make the ‘Spine Race’ even more interesting!

I've been mucking about in the mountains for longer than I care to mention. I started out by walking my local hills, then went on to rock climbing, mountaineering and skiing. Still doing it, and still getting a buzz. I'm now sharing the fun, through my guided walking business (Hillcraft Guided Walking) and by writing routes for other publishers, mainly Walking World and Discovery Walking Guides. Just to make sure I keep really busy, I am also currently a member of my local mountain rescue team.
View all posts by Paul Shorrock →
This entry was posted in 4. Northern England and tagged Adventure Racing, hillwalking, Pennine Way, photography, Spine race, winter. Bookmark the permalink.

16 Responses to #104 –A short jog over the Pennine Moors! – ‘Spine Race’ training weekend in the Yorkshire/Lancashire Pennines