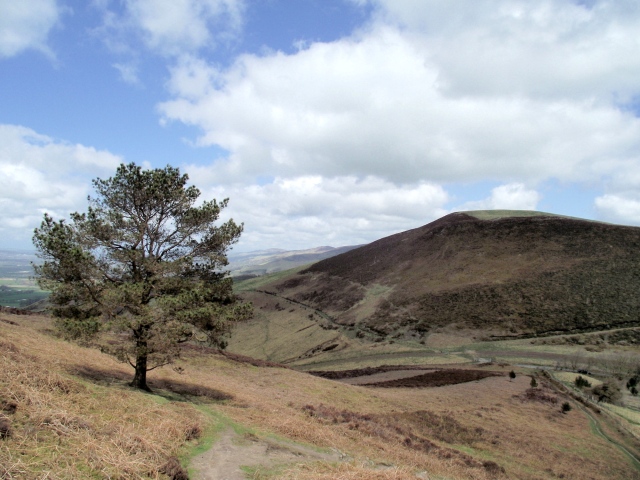 Saying that life has been busy over the past couple of months isn’t the half of it!  In January my Border Collie ‘Mist’ passed her obedience and stock (sheep) tests, and began her training as a Search And Rescue (SAR) dog, and a month later I was accepted as a probationary member of my local mountain rescue team, NEWSAR (North East Wales Search And Rescue).

The first outings with NEWSAR were designed to assess our navigational skills.  The hills of the Clwydian Range are ideal for this, being rolling upland with subtle rather than obvious features.  Mind you, for probationary mountain rescue team members, a featureless hillside does not constitute a difficult enough test, so part of our preliminary wanderings were in the dark to add a bit more interest.

So it came to pass that my first ever visit to Moel y Plas was mostly in the dark.  I had seen photos of the area some weeks earlier in ‘Mrs B’s’ excellent blog, though photos aren’t a lot of use in the dark!  As an extra bit of serendipity my companion on the assessment was none other than Mrs B’s husband, a new recruit to NEWSAR like me – at least if we had got lost I would have been in good company.

We didn’t get lost, though there were a couple of tricky locations to find, one of mine being a tiny kink in a contour line on the map that I had to use a magnifying glass to see properly, and Rich had a similarly awkward one on a completely bare hillside.  In comparison, fences that had been moved and paths that had been re-routed were a doddle.

Chris and I out a few days after the night navigation exercise – Some uphill to start with ….

…. before a little more uphill

Chris with Moel y Plas behind 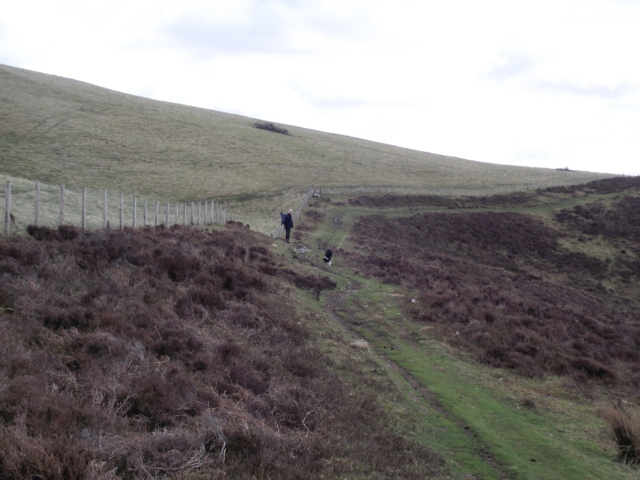 One thing we didn’t get that night were the views, so a return trip was called for, this time in the daylight with Chris and ‘Mist’.  Initially we followed the same route that Rich and I had followed on our assessment walk, but we decided to include Moel y Plas summit as well – like many of the Clwydian Hills, there are the remains of a burial cairn at the top (possibly Bronze Age, which would make it around 4000 years old).

Some of the locals out for a walk

Possibly the calmest hill sheep I have seen

Stile on the Offa’s Dyke Path …. 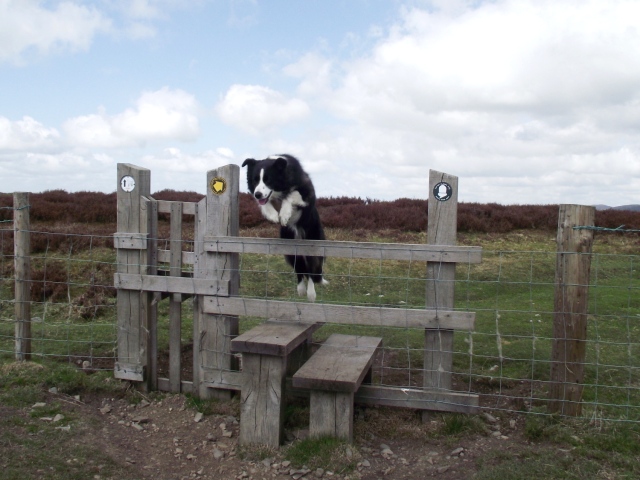 …. but Border Collie’s don’t use stiles 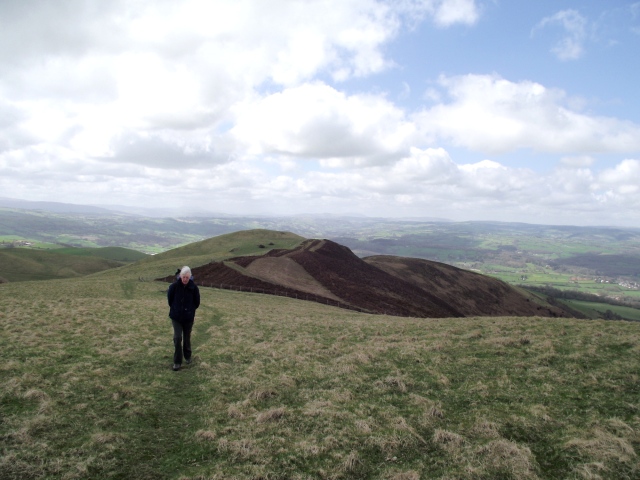 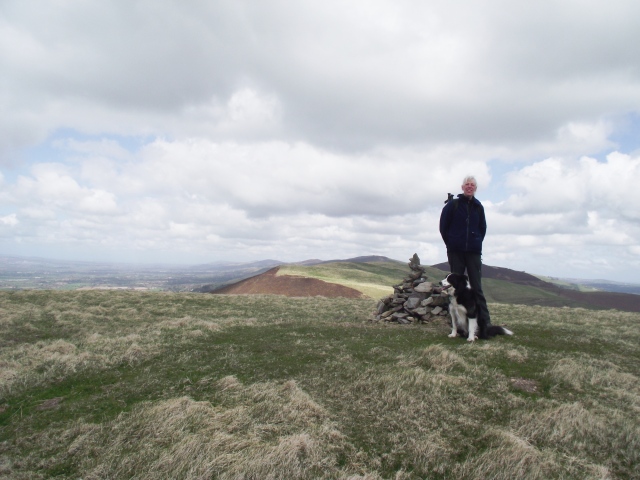 Chris and Mist on the summit

After a short wander round the top we carried on south along the Offa’s Dyke Path to include the smaller top of Moel y Gelli.  Then it was time to head back, passing around the sides of Moel y Plas this time, our route passing above the small fishing lake of Llyn Gweryd.

Heading south on the descent from Moel y Plas 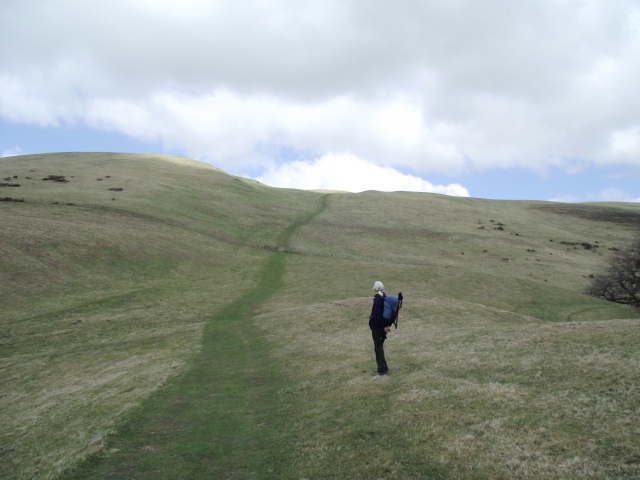 Looking back at the same point

Beyond the lake we saw a sad reminder of the March blizzards – several sheep carcasses were laid out along the edge of a wood, lying where they would have been buried by the snow.  Thankfully the survivors seem to be none the worse, and the lambs are possibly the calmest and boldest hill sheep I have seen.

Casualties of the March blizzards 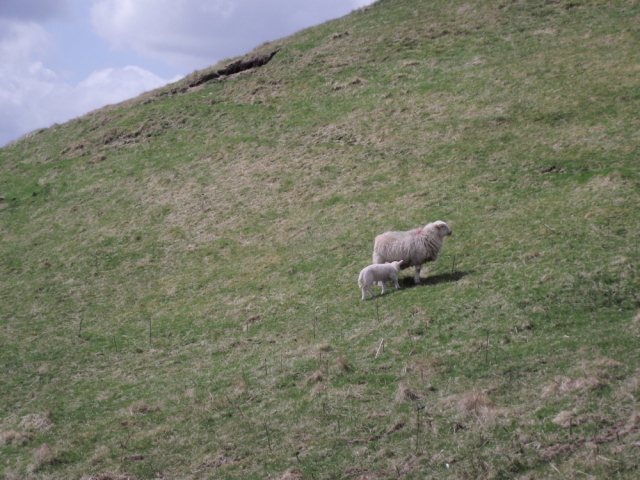 Some of the survivors

I've been mucking about in the mountains for longer than I care to mention. I started out by walking my local hills, then went on to rock climbing, mountaineering and skiing. Still doing it, and still getting a buzz. I'm now sharing the fun, through my guided walking business (Hillcraft Guided Walking) and by writing routes for other publishers, mainly Walking World and Discovery Walking Guides. Just to make sure I keep really busy, I am also currently a member of my local mountain rescue team.
View all posts by Paul Shorrock →
This entry was posted in 5. North Wales and tagged Border Collie, Clwydian Hills, hillwalking, mountain rescue, photography. Bookmark the permalink.