Some people might have wondered why I recently returned to mountain rescue after a break of 15 years.  It’s quite simple really – it’s fun!  It’s not always easy to remember that when the phone rings in the early hours of the morning, and the weather outside is foul, but after a few years the bad times are forgotten, and only the good times are remembered….

Map of the area searched by the Penrith MRT search dogs on the April 1985 callout.
(The search route is shown in red, and my subsequent wanderings from Great End to Lingmell Col in blue)

In April 1985, a man aged 20 set off to walk from Wasdale to Thirlmere, but did not arrive at his pre-arranged rendezvous.  At 11pm Keswick Mountain Rescue Team responded with a mass callout of all the search dogs in the Lake District.  Two Penrith MRT dogs were available, John with ‘Sam’ and me with ‘Matt’ – we were tasked to clear the valley of Grains Gill from Stockley Bridge to the cliffs of Great End. 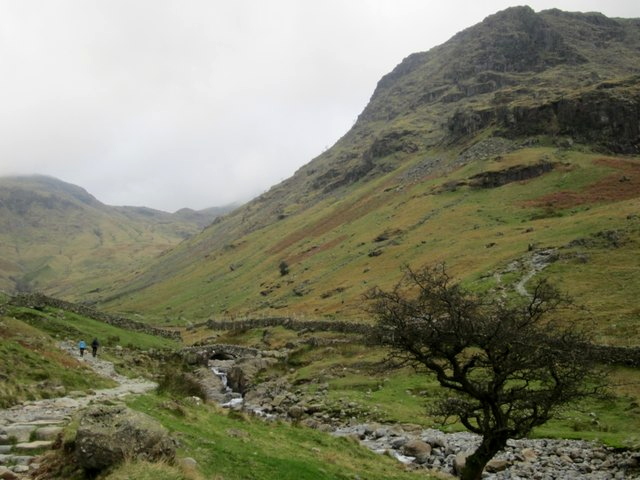 Someone clearly had a sense of humour, because ‘Sam’ and ‘Matt’ detested each other and would fight at every opportunity – the answer was that John would search the west bank of the stream with ‘Sam’, and I would take the other side.  John must have won the toss of the coin, because his area was like a manicured lawn compared with mine, though in the dark it was hard to tell. 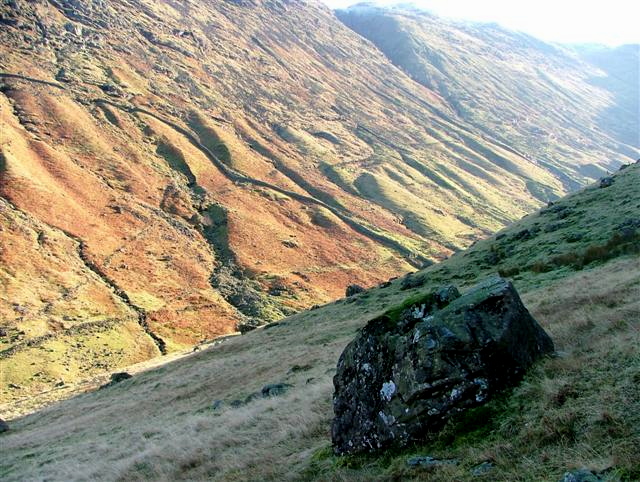 At the time, ‘Sam’ and John were one of the most experienced dog and handler teams in the Lake District, and Golden Labrador ‘Sam’ had won the Novice Shield the year that he qualified, but he was now approaching retirement age – on the other hand, Border Collie ‘Matt’ was 3 years old, and ready for a bonus night walk, so despite having the worst of the ground, ‘Matt’ and I were soon in the lead.

The upper part of Grains Gill, where it becomes Ruddy Gill © KA

1½ kilometres from the start point the valley began to narrow to a point where one dog could cover the ground.  Rather than waiting for John to catch up (with the inevitable dog fight) I radioed him to suggest that he finished off his area and that I would carry on alone to Great End to complete our search task.  John agreed, and shortly afterwards I watched the green ‘glow-stick’ on ‘Sam’s’ search jacket bobbing in the dark, heading down towards Borrowdale and civilisation. 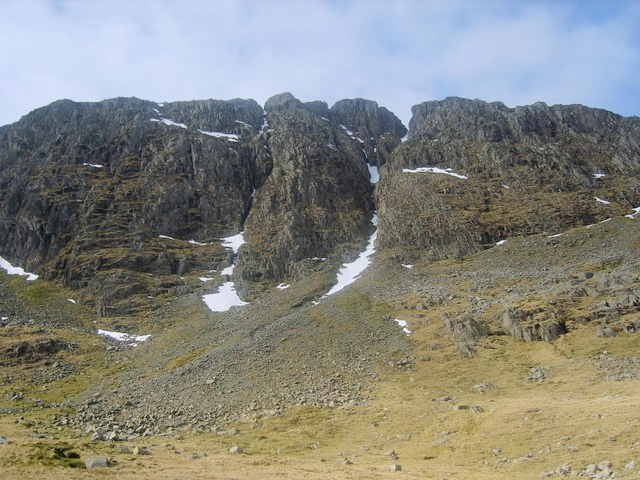 The cliffs of Great End, the end of the search task © Michael Graham

It didn’t take long to clear the remainder of the now narrow valley, and at about 3.30am I was sat below the brooding crags of Great End.  As ‘Matt’ curled up in a hollow for a nap, I had a coffee break, and started working out how I was going to return to Borrowdale to get a lift back to my car.  I was working as a police officer at the time, and was due to start work at 9am – as I formulated a few weak excuses for being late on duty, the radio came to life.

I replied that I could.  It looked as though they had another job for me, but if I was going to get a bollocking at work I might as well earn it!

“Search Dog Paul go to Lingmell Col, a helicopter will pick you up there at 6.30”.

The potential bollocking was forgotten.  I was being offered a great night walk followed by a ‘heli’ ride – Result! 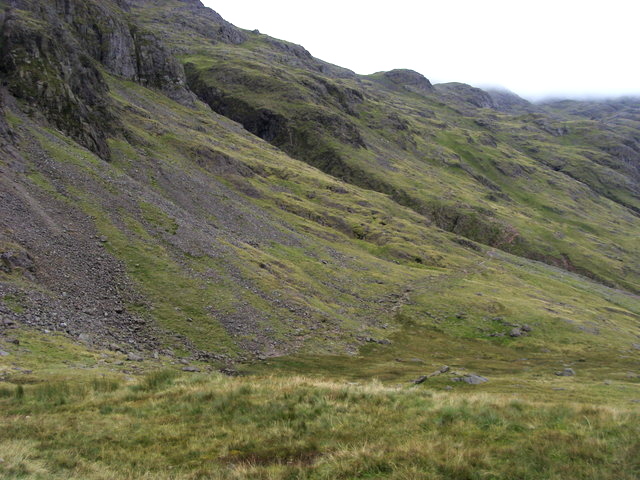 The start of the Corridor Route near Styhead Tarn © Shaun Ferguson 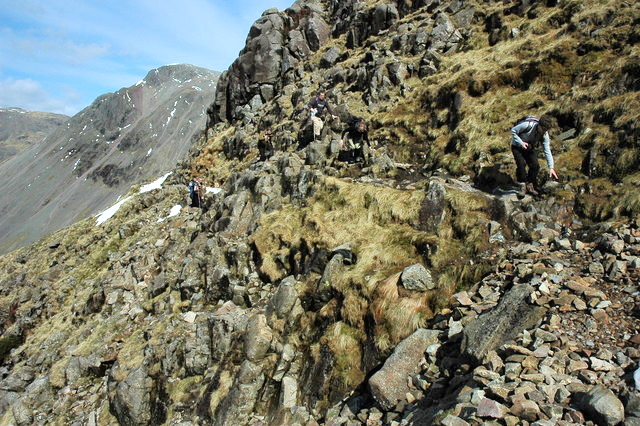 The Corridor Route clinging to the hillside © Philip Halling

I made good speed down towards Styhead Tarn, trying to keep up with a now wide-awake Border Collie.  From there we took the Corridor Route heading for Lingmell Col – the path starts on gentle slopes, but ends up clinging to the hillside in places.  The dark night was starting to give way to a steel-grey dawn as the dog and I arrived at the col with time to spare – time for another coffee break for me, and another snooze for ‘Matt’.

Looking back towards the Corridor Route from Lingmell Col © Michael Graham

Dead on time the yellow RAF Sea King came into view, and in minutes we were back in Borrowdale – walking would have taken a good deal longer, but I love flying and ‘Matt’ had no fear of the clattering, chattering machine that whisked us down to the valley.  There was a phone box near the landing site, so I thought it might be a good idea to contact the duty inspector and let him know that I was going to be late in to work.

“Sorry about this, boss, but I’m just down in Borrowdale after a night search with the dog – I’ll get home as soon as I can, but I’ll be late in for ….”

“Paul” the inspector interrupted, “You’ve been out all night working for us in your own time – we have enough staff on duty, take the day off”.

I could have kissed him! 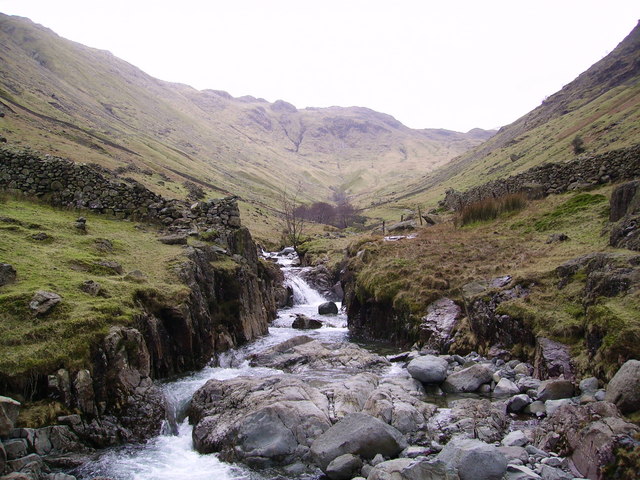 Looking up Grains Gill, our search task for the night © Michael Graham

All other images are taken from the Geograph Project and are reproduced under a Creative Commons Licence – copyright holders are shown on each individual image.

p.s.  As it was dark at the time of the events described, and I didn’t have time anyway to be taking pictures on an operational search, the fine images shown are obviously not my handiwork.

p.p.s.  The young man who unwittingly won me a night walk, a heli ride and a day off work turned up soon after I made my phone call.  He was cold, wet and tired but otherwise well.

I've been mucking about in the mountains for longer than I care to mention. I started out by walking my local hills, then went on to rock climbing, mountaineering and skiing. Still doing it, and still getting a buzz. I'm now sharing the fun, through my guided walking business (Hillcraft Guided Walking) and by writing routes for other publishers, mainly Walking World and Discovery Walking Guides. Just to make sure I keep really busy, I am also currently a member of my local mountain rescue team.
View all posts by Paul Shorrock →
This entry was posted in 2. Lake District and tagged Border Collie, Borrowdale, hillwalking, mountain rescue, mountaineering, mountains, photography. Bookmark the permalink.