Cwm Cywarch in the Aran Hills

A closer view of the area

The first day in the Aran Hills (see post #135) had included Aran Fawddwy (905 metres), the highest peak in the range, but I had left Glasgwm (780 metres) for the next day.  Dull weather conditions gave no clue that the rare event of a British heat-wave was just a few days away, but there would be no heat-wave on this trip.

The end of the track in Cwm Cywarch

Looking back down Cwm Cywarch

Our route getting steeper 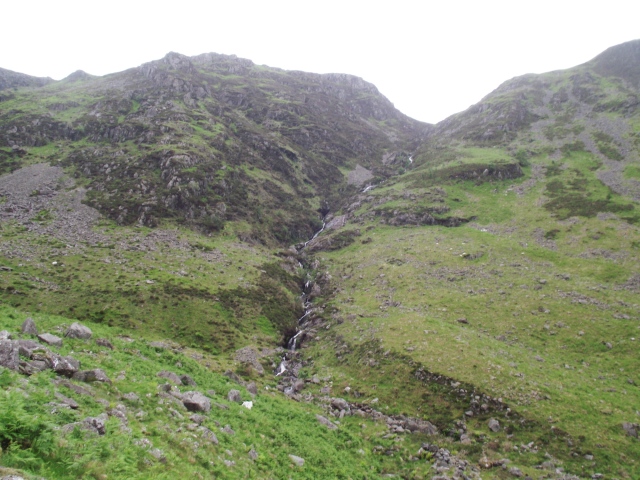 We set off, travelling hopefully, up the steep valley next to the climbers’ crag of Craig Cywarch.  This had been my descent route the previous day, and on a hot summer morning it would have been delightful, with cascades and interesting views all around.  However, it soon became obvious that ‘hot summer morning’ was not on the menu, and we walked upwards into that fine drizzly rain that manages to penetrate every gap.

Heading upwards, waterproofs on by now

Fifty shades of grey (plus a bit of green) 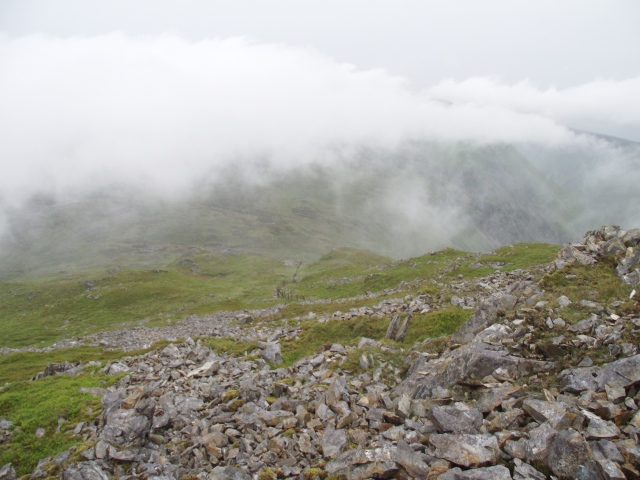 The view down our ascent route, just below the summit of Glasgwm

The summit cairn, Border Collie ‘Mist’ first to the top as usual

And penetrate it did!  There wasn’t much incentive to stop and admire the view as it was mostly ‘fifty shades of grey’, but as we approached the summit the rain finally began to ease off.  The top was marked by a large stone cairn that loomed out of the mist, and Border Collie ‘Mist’ was first there as usual, followed by her two damp companions.

Llyn y Fign, just below the summit of Glasgwm 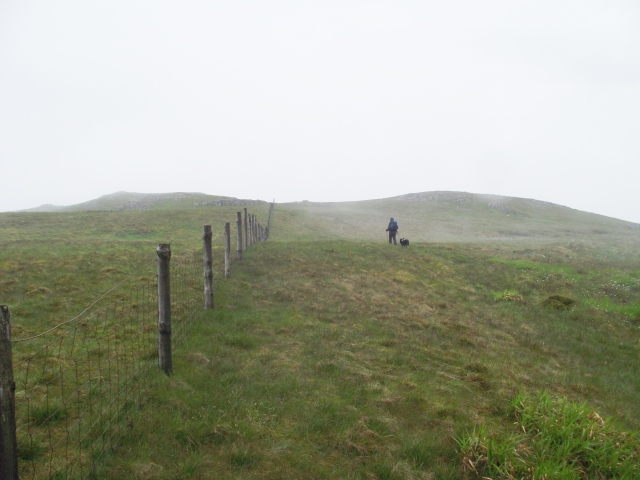 The start of our way back to the valley

We didn’t linger at the top, though we did stop to admire the small lake of Llyn y Fign.  With an area greater than one acre (4000 sq metres), this is one of the highest large bodies of water in England and Wales, and it would make a superb wild camp site.  Not today though!

The start of the final easy descent …. 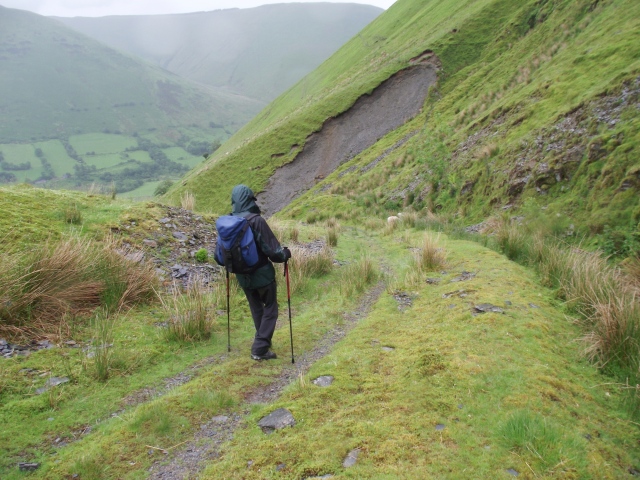 …. heading down a good track

Our descent followed a fence that made a handy navigation handrail, before we reached a good track heading straight back towards the car park.  It is said that “there’s no such thing as bad weather, just unsuitable clothing” – We finished just before the heavens opened, and watched the deluge from inside the van.  A week later I was back in the Aran Hills in temperatures around 25º Celsius.

The end of a misty, moisty day in the Aran Hills