#155 – The Southern Peaks of the Carneddau, North Wales 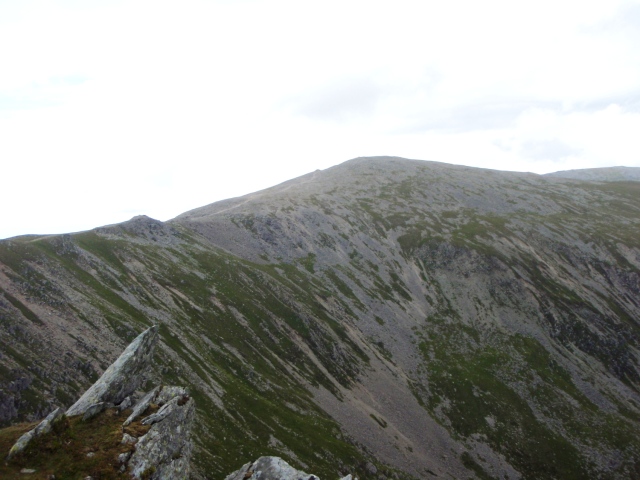 Back to the hills of the Carneddau this week. I tend to bang on a bit about these wild, deserted hills, and a day there never disappoints. My last trip there had been just a few weeks back (see Post #151) but I fancied a return trip to the south side of the range – the traverse of Pen yr Ole Wen, Carnedd Dafydd, Carnedd Llewelyn, Craig yr Ysfa and Pen yr Helgi Du makes a good day out in anyone’s book, and I’ve posted about these hills before (see Posts #26 and #108) 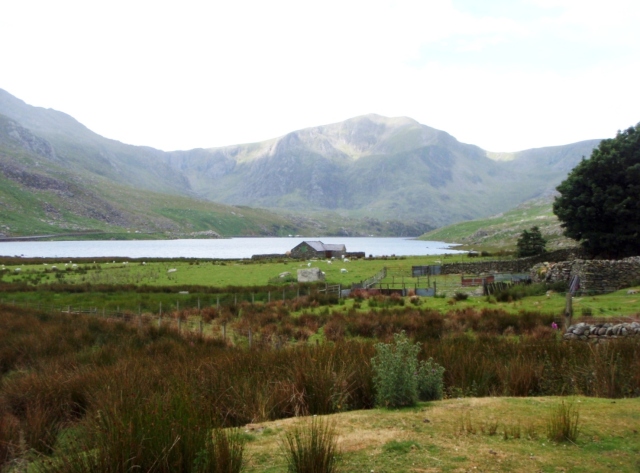 Llyn Ogwen with Y garn behind

The start of the East Ridge of Pen yr Ole Wen

I always start Pen yr Ole Wen by the East Ridge – there’s a great little rocky scramble that is spoiled only by being too short, and the whole route is preferable to the sweaty slog up the south side that starts near Ogwen Cottage. What’s more the scenery is better, with great views of Y Garn and Tryfan. 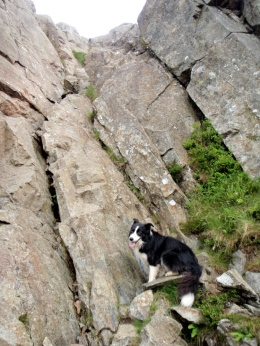 The same place in winter (JB)

Dog’s eye view of the problem 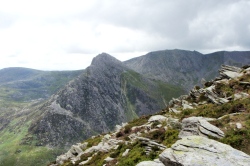 Tryfan from the East Ridge

The same view in winter 1½ years ago (JB) 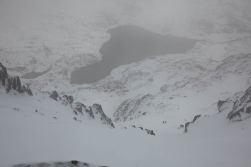 The same view in winter (JB)

Looking back down the East Ridge

When I reached the short scramble I realised that it was 1½ years since I had been here (see Post #108). On that occasion, the steep, rocky groove had been banked up with snow, and Border Collie ‘Mist’ had shot straight up – this time it was naked rock, and on her first attempt there was a thrutchy scrabble as ‘Mist’ attempted (literally) to get to grip with the problem. I quickly got her harness fitted, and used a rope from above to give some assistance. From there it was a steady walk to the top.

On the summit of Pen yr Ole Wen, with Tryfan (centre) and Glyder Fach behind and right

The ridge to Carnedd Dafydd 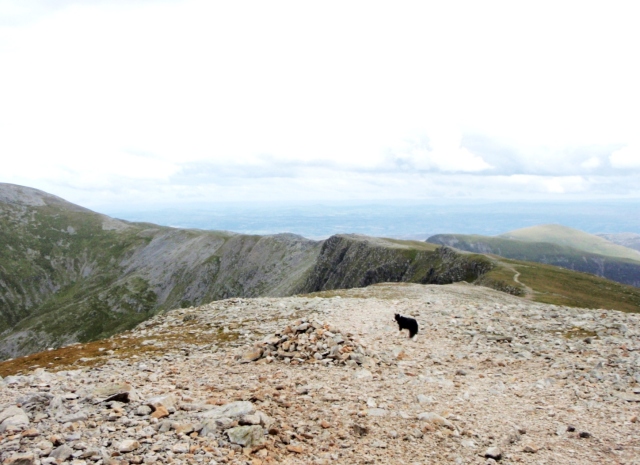 Heading towards the top of Ysgolion Duon

The next objective from Pen yr Ole Wen was Carnedd Dafydd, named after one of the last true Princes of Wales (read more about the story of Prince Llewelyn and Prince Dafydd in Post #26). A broad ridge gave easy walking with great views, and dog and I were soon at the top and ready for a food stop – a couple of biscuits for ‘Mist’ and my healthy-eating option of a fried egg and bacon roll. (That’s healthy-eating in the sense that not eating is definitely not a healthy option) 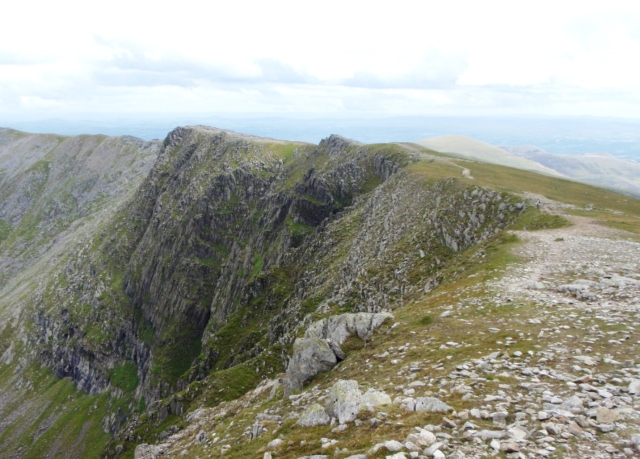 The cliffs of Ysgolion Duon

Carnedd Llewelyn, at 1064 metres the highest point on the circuit

From Carnedd Dafydd the route continued along the top of the impressive crags of Ysgolion Duon (the ‘Black Ladders’). These north facing cliffs don’t get much sun, and have never been popular rock-climbing crags, but in a good winter they provide good snow and ice routes – not today though!   Another steady pull led up to the summit of Carnedd Llewelyn, the highest point of the day (and the third highest peak in Wales) at 1064 metres (3490 ft). From there it was downhill to the top of Craig yr Ysfa. 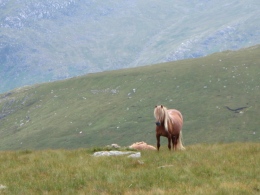 Non-local residents! Must be ‘rush hour’

Taking our place at the rear of the queue

On the way down I bumped into some of the local residents, the hardy hill ponies who live out on the hills of the Carneddau all year, summer and winter. Soon after that there was another entertaining scramble at Craig yr Ysfa, leading down to the col of Bwlch Eryl Farchog. It briefly turned into rush hour conditions, as I ran into the back of a large group on the same descent. The dog and I were still at the rear of the queue for the short scramble on to Pen yr Helgi Du, but the leader of the group took pity on us and let us through.

…. and part of the straightest road in Wales 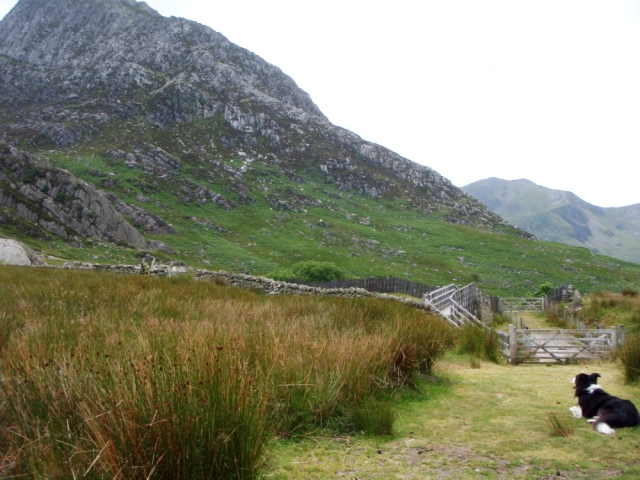 Having squeezed past the group, ‘Mist’ shot ahead to the summit with me close behind. From there it was a glorious easy romp down the grassy ridge of Yr Braich, avoiding the long straight tarmac road to the west as long as possible. From there I passed the most hazardous part of the route (the crossing of the busy A5) before joining the old Turnpike Road, giving a quiet, traffic-free yomp back to the car near the farm at Gwern Gof Uchaf – all in all a good day out with 16kms (10 miles) of walking and 1087metres (3566 ft) height gain.

I've been mucking about in the mountains for longer than I care to mention. I started out by walking my local hills, then went on to rock climbing, mountaineering and skiing. Still doing it, and still getting a buzz. I'm now sharing the fun, through my guided walking business (Hillcraft Guided Walking) and by writing routes for other publishers, mainly Walking World and Discovery Walking Guides. Just to make sure I keep really busy, I am also currently a member of my local mountain rescue team.
View all posts by Paul Shorrock →
This entry was posted in 5. North Wales and tagged Border Collie, Carneddau, hillwalking, mountains, photography, Snowdonia. Bookmark the permalink.

9 Responses to #155 – The Southern Peaks of the Carneddau, North Wales