Carnedd Dafydd seen from the north 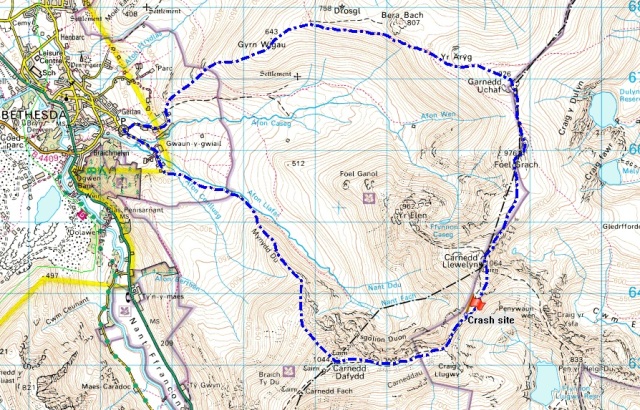 The route, including the location of the air-crash site

The mountains of the Carneddau in North Wales are a fairly recent obsession for me – when I first walked here, I started by checking out the main summits (as you do) then began exploring odd corners where people tend not to go. But sometimes I feel the need to stride off across the heights, and this was one of those days. 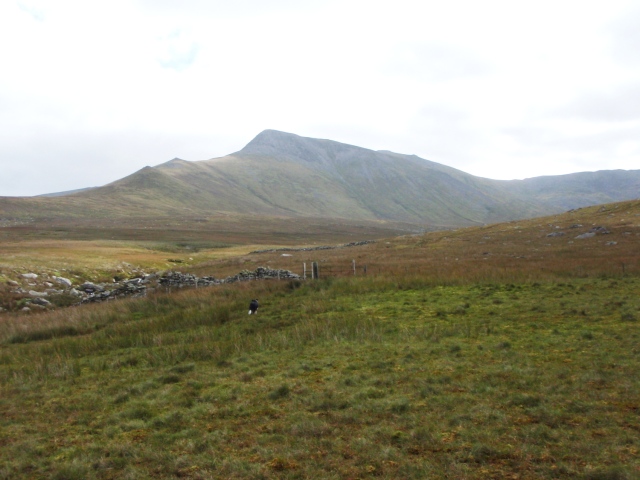 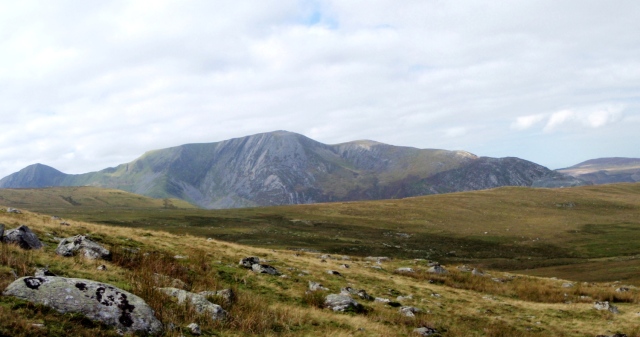 …. and the view southwest to the mountains of the Glyderau 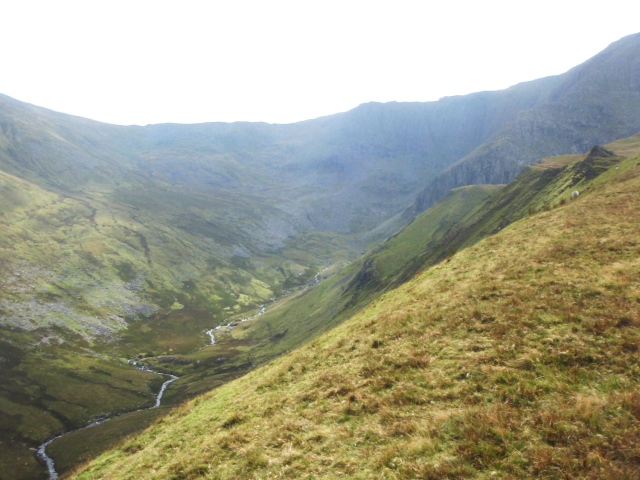 Looking down the steep slopes to the river below (Afon Llafar) ….

…. and the view back down the ridge

The Carneddau are not glamourous, exciting hills like the Snowdon Range or Glyderau, but they have their moments. The mountains may lack the sharp, knife-edge ridges of the other ranges, but they are huge in area, and these mountains make up the largest land mass higher than 750 metres (about 2500ft) south of the Scottish border. A walk here is usually going to be a ‘biggy’! 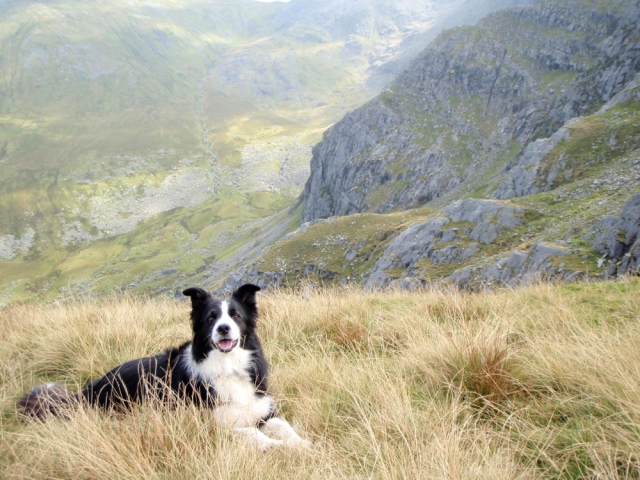 One last look back along the route of ascent from the summit of Carnedd Dafydd ….

…. and a totally different view looking in the opposite direction towards the Glyderau

The next objective – Carnedd Llewelyn

Side view of the route up Carnedd Dafydd looking west

There was a simple plan – start from Gerlan near Bethesda, and head for Carnedd Dafydd via the broad grassy Northeast Ridge, a route I hadn’t taken before. A dull day with ‘flat’ light conditions didn’t hold much hope for photographs, but things improved along the way. The map suggested that the long ridge would be a bit of a plod, but the ascent passed quickly. My next objective was Dafydd’s big brother, Carnedd Llewellyn, but I had a small diversion along the way.

Most of the military air-crash sites in the hills of the UK date back to WW2, when flying training was carried out more frequently and often in poor weather conditions, but some accidents occurred in peacetime. On the night of 14th March 1950 an Avro Lincoln bomber took off from RAF Scampton on a training flight, but weather conditions deteriorated during the flight, and Avro Lincoln RF511 was one of three aircraft diverted to RAF Valley on Anglesey. 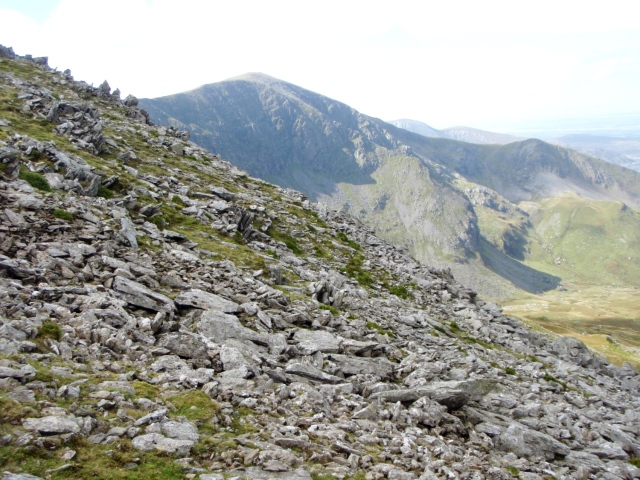 The crash site, just below Bwlch Cyfryw Drum, with Carnedd Dafydd behind

The view down to where the remains of the aircraft lie

The other two aircraft landed safely at 0300hrs on 15th March, but at about the same time news came in from Bethesda police station that an aircraft had crashed nearby. Half an hour later the RAF Mountain Rescue team based at Valley set out to the crash site, arriving there at 0520hrs. The crew of six were all killed in the crash – a Court of Inquiry determined that the likely cause was that the aircraft had turned onto a South-easterly course over Anglesey instead of the reciprocal course out to sea. 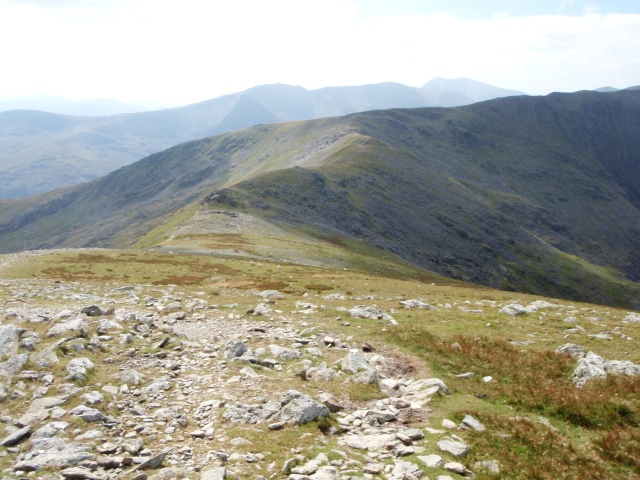 The same aspect from the slopes of Carnedd Llewelyn, with the impact site dead centre

There is very little evidence of the crash at the impact site, but larger pieces of wreckage still lie in the cwm below.

Different terrain of the return leg

The east face of Yr Elen, seen on the descent from Carnedd Llewelyn ….

After my visit to the crash-site, I carried on over Carnedd Llewelyn, the highest peak in the range – from there it wasn’t quite ‘all down hill’, but the hard work was done. On the way, my attention was drawn to the east face of Yr Elen, where the Northeast Ridge was looking good in the afternoon light, and I found myself already planning my next day out in the hills.

The high path back to Bethesda

The strange rocks making up the summit of Yr Aryg ….

…. and further on, Bera Bach

However, I still had this walk to finish. After Llewelyn came Foel Grach, Carnedd Gwenllian (formerly named Garnedd Uchaf), followed by Yr Aryg, Bera Bach and Gyrn Wigau.  The descent is over rolling grassy hills, rather than the mountain ridges on the ascent, but it made for fast easy walking.

Heading for the last summit of the day ….

Bethesda in the distance

I later realised why Border Collie ‘Mist’ seemed to be in such a hurry – dinner time takes priority over everything!

I've been mucking about in the mountains for longer than I care to mention. I started out by walking my local hills, then went on to rock climbing, mountaineering and skiing. Still doing it, and still getting a buzz. I'm now sharing the fun, through my guided walking business (Hillcraft Guided Walking) and by writing routes for other publishers, mainly Walking World and Discovery Walking Guides. Just to make sure I keep really busy, I am also currently a member of my local mountain rescue team.
View all posts by Paul Shorrock →
This entry was posted in 5. North Wales, Aircrash Sites and tagged Border Collie, Carneddau, hillwalking, mountains, photography, Snowdonia. Bookmark the permalink.