#159 – Horses and Dragons – The Northeast Ridge of Yr Elen 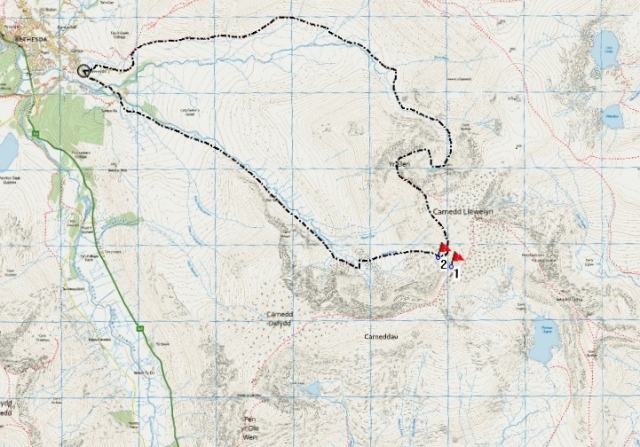 The route (clockwise) with Yr Elen, the aircrash site (1) and the site of the wreckage (2)

One of the highlights of my trip out the previous week (see post #158) had been a great view of Yr Elen in the afternoon light. Yr Elen looks like a ‘proper’ mountain, but doesn’t get too many visitors as it lies at the end of a spur, isolated from the main plateau. The light had picked out the Northeast Ridge, known as the ‘Dragon’s Teeth Ridge’, and before I got back to the car I had decided that this would be my next trip out.

The northwest side of Yr Elen just after setting out – not looking promising …. 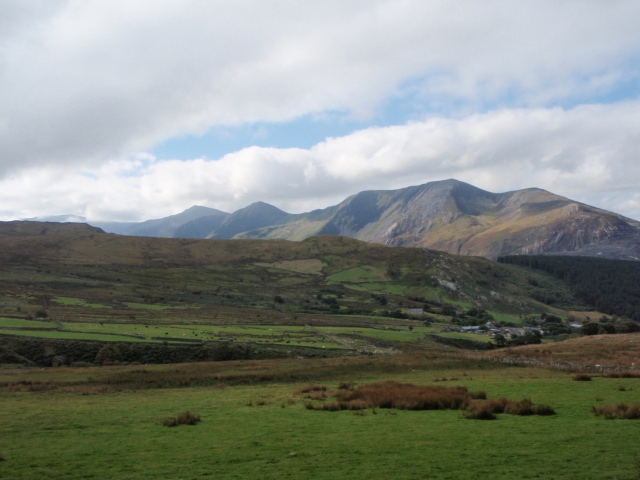 …. but sunshine over the hills of the Glyderau!

Yr Elen stands at a height of 962 metres (3156 feet) making it one of the 15 mountains in Wales over 3000 feet high. I had decided to follow the river (Afon Caseg) to what is regarded as the most remote cwm (valley) in Wales. At the head of the valley lies a small lake called Ffynnon Caseg (the ‘Mare Spring’) named after the wild ponies frequently seen in these hills. 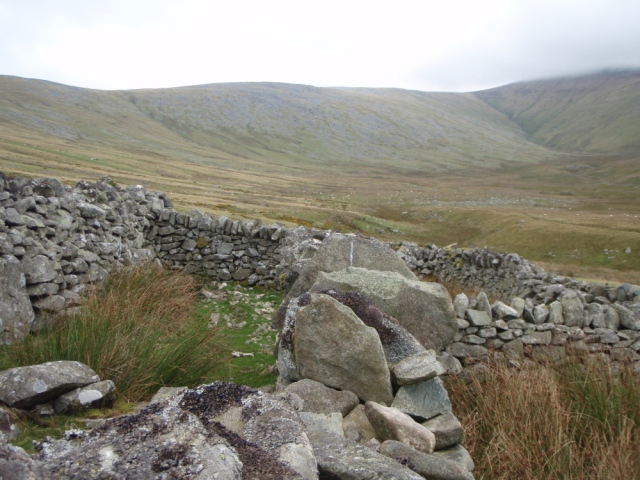 Old sheepfold by Afon Caseg, with my valley route stretching out ahead 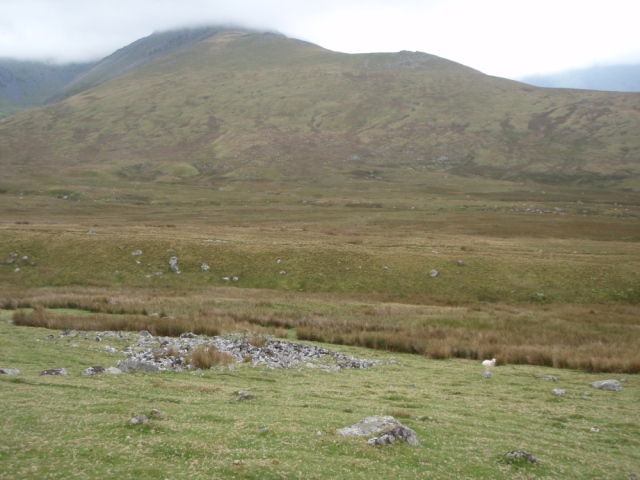 Remains of the ancient settlement, with Yr Elen beyond 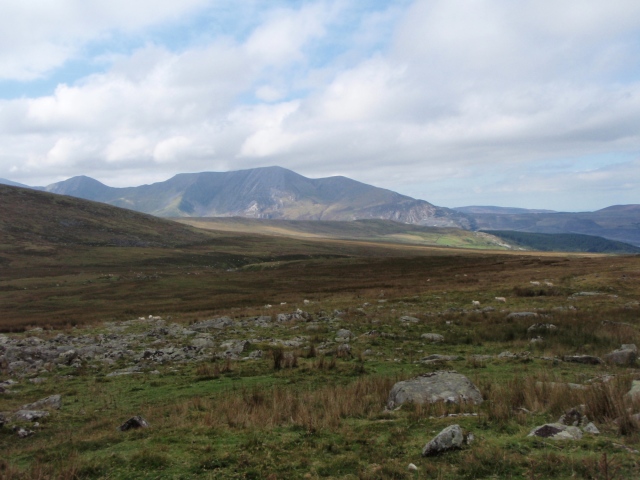 View of the Glyderau from the ancient settlement

The weather didn’t exactly look promising as I set off, but the cloud started to lift as I passed an ancient settlement, possibly dating back to the Bronze Age – the stones used to build the settlement were later plundered in the 18th Century to build a nearby sheep fold. The Bronze Age builders certainly had a good eye for a view, with the nearby hills of the Glyderau dominating.

My route, heading towards where the valley narrows 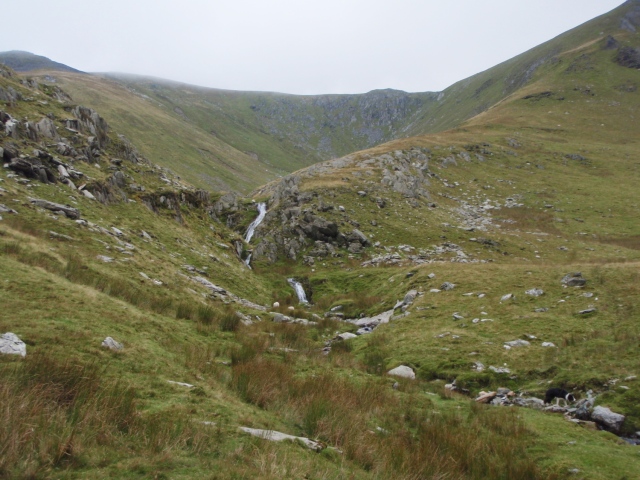 Waterfall in the upper reaches of the narrowed valley …. 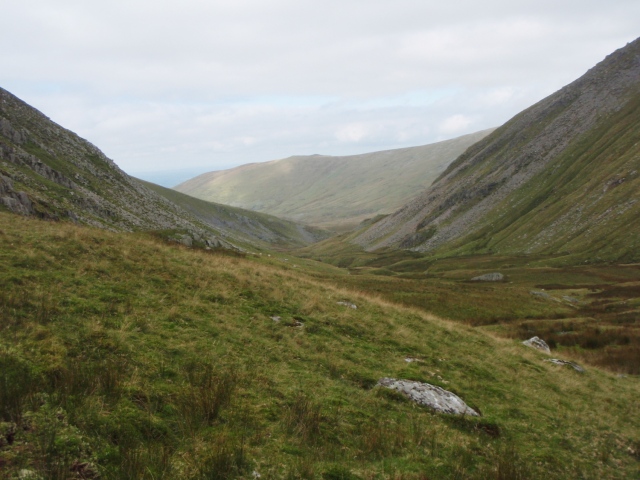 …. and the view looking back to the route in

The walk in to the settlement had been fairly level, but as the valley ahead narrowed the faint track started to gain height. 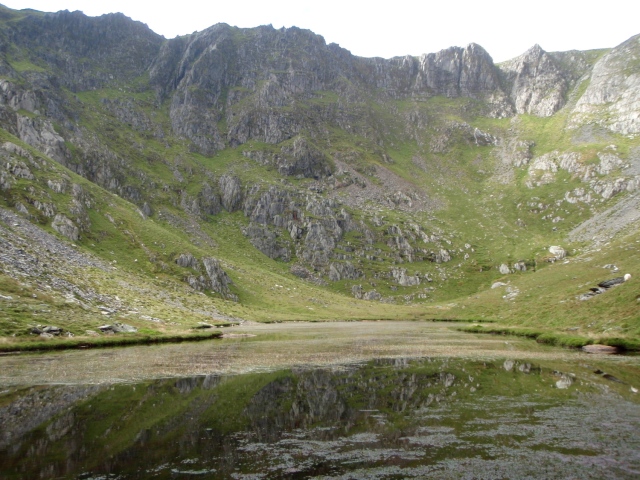 Cwm Caseg, possibly the most remote cwm in Wales, with the small lake of Ffynnon Caseg

Looking up to the summit of Yr Elen, with the Northeast Ridge on the right skyline 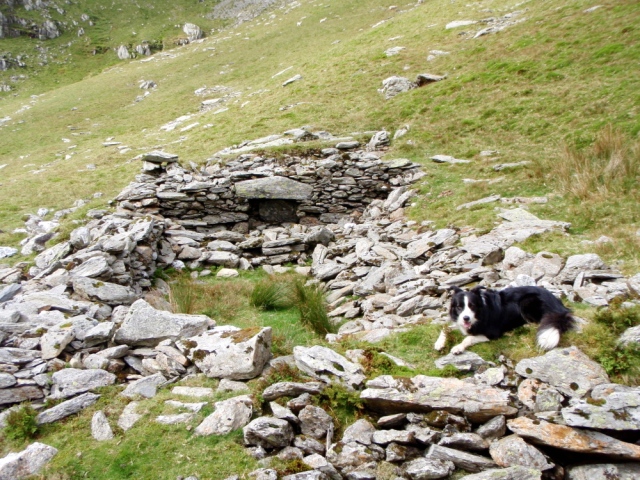 Border Collie ‘Mist’ at the ruins of the old hafod 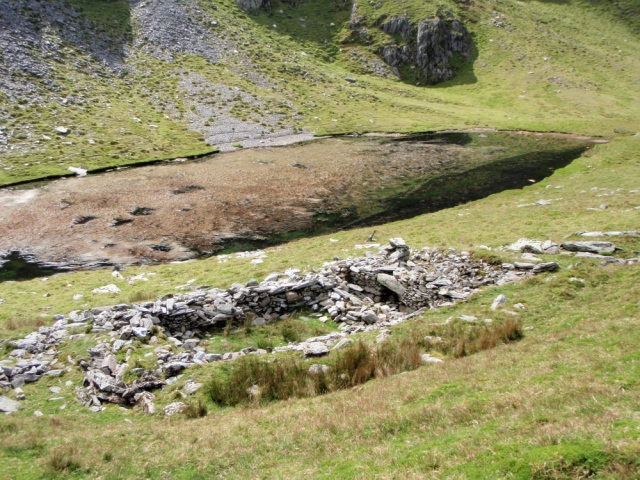 The ruins of the hafod, thought to have once been the highest in Wales, next to the small lake

The cwm comes as a complete surprise, with a tiny lake sitting below towering crags. Next to the lake lie the ruins of a tiny hafod (summer dwelling) thought to have been the highest in Wales when it was occupied. The long walk in, and the remote setting, must have made this a very lonely place to live, and getting the groceries delivered must have been a headache to say the least! 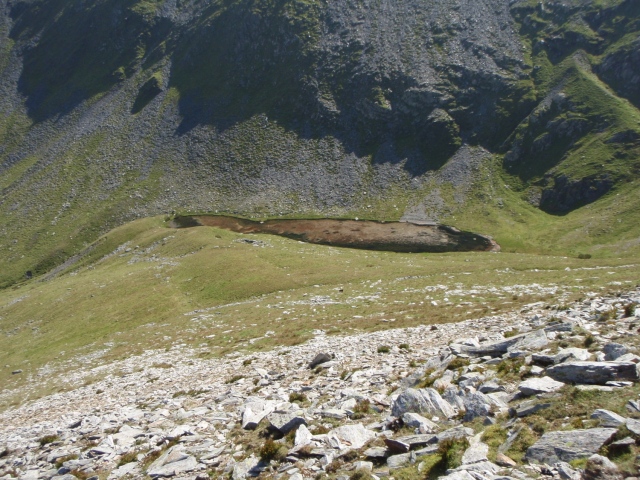 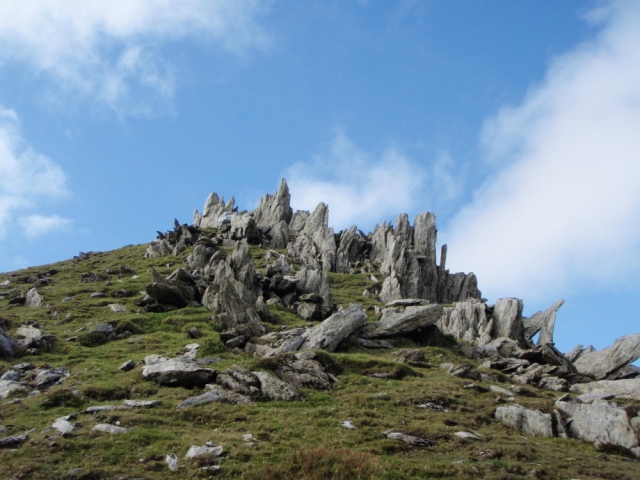 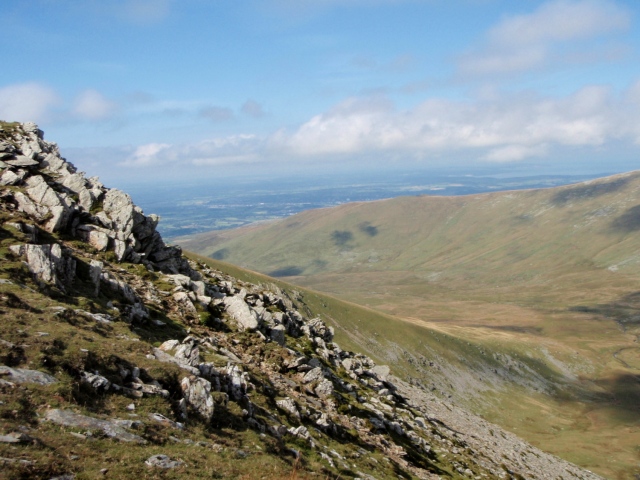 Looking down to my walk-in route …. 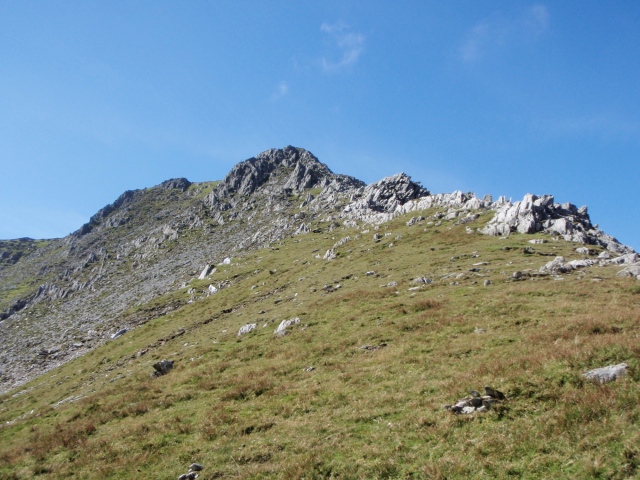 …. and looking up to more ‘Dragons Teeth’ 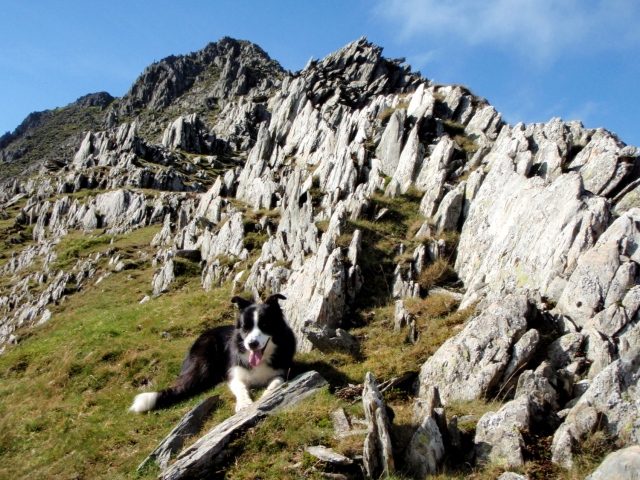 ‘Mist’ chilled out, and unimpressed by all the talk about dragons 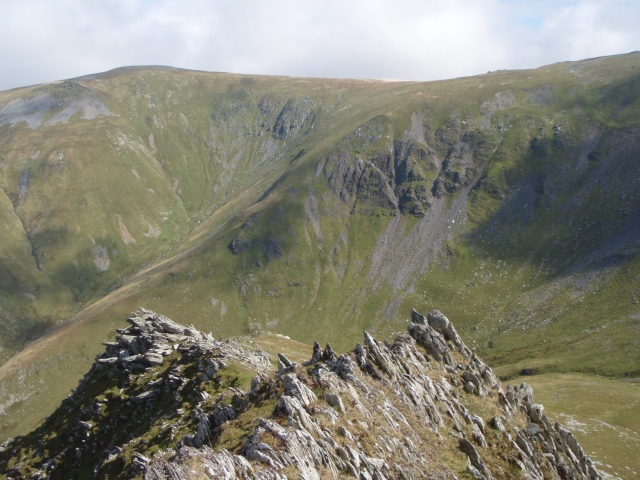 The view back down the ridge 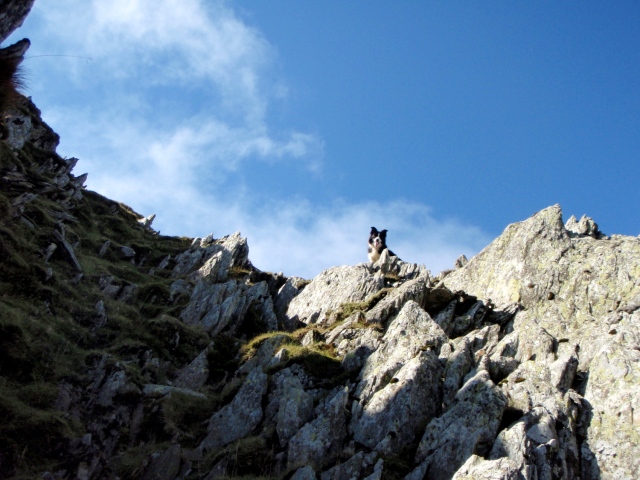 There were no horses at the ‘Mares Spring’ today, so it was time to check out the Northeast Ridge for Dragon’s Teeth. The ridge is well named, as the rocky crest is decorated with sharp rocky teeth, making for spectacular views, though there is no technical difficulty – I kept a fairly steady pace going up, with an impatient Border Collie checking back to see why I was taking so long. 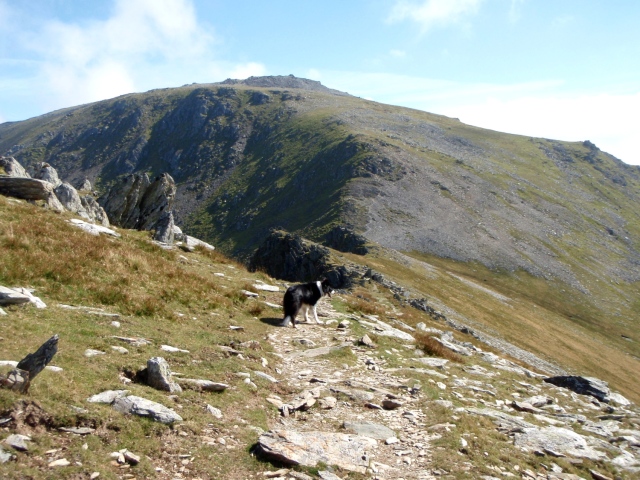 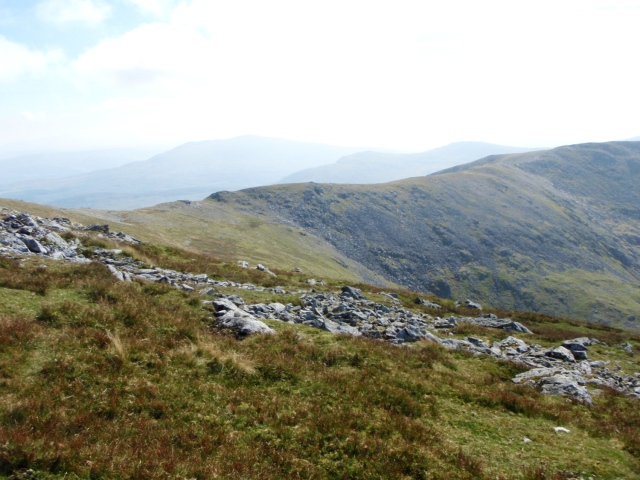 …. but we’re going ‘off-piste’ (the Lincoln crash site is the rocks central in the photo)

An attractive ridge joins Yr Elen to Carnedd Llewelyn, the highest peak in the Carneddau group at 1064 metres (3490 feet), but this wasn’t on today’s tick list – instead I went ‘off-piste’, heading for the site of the aircrash that occurred here on 15 March 1950, and which I had visited the previous week (see post #158) 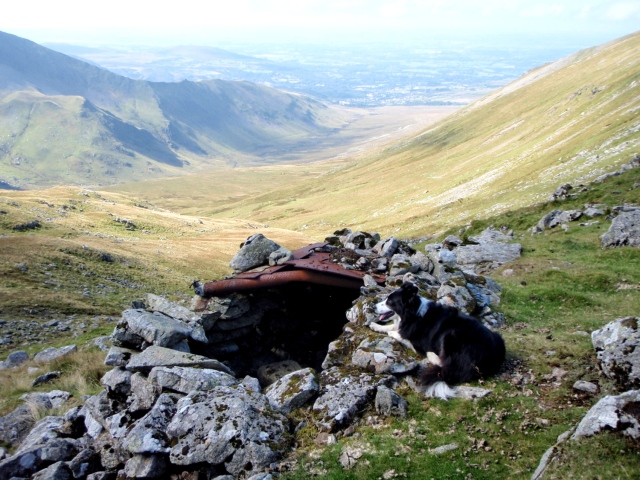 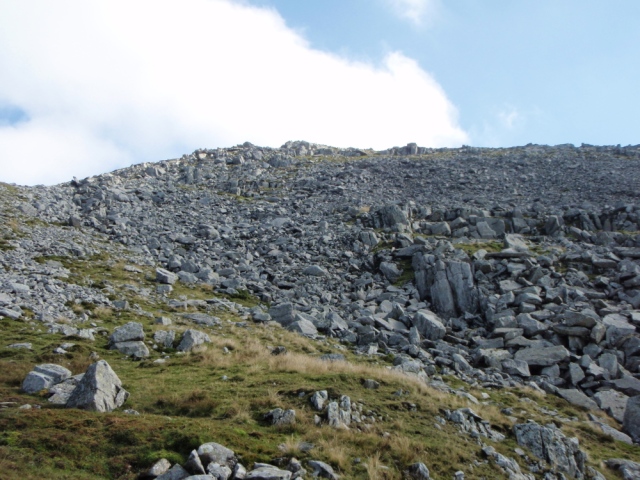 Looking uphill to the impact site, roughly in the centre of the photo 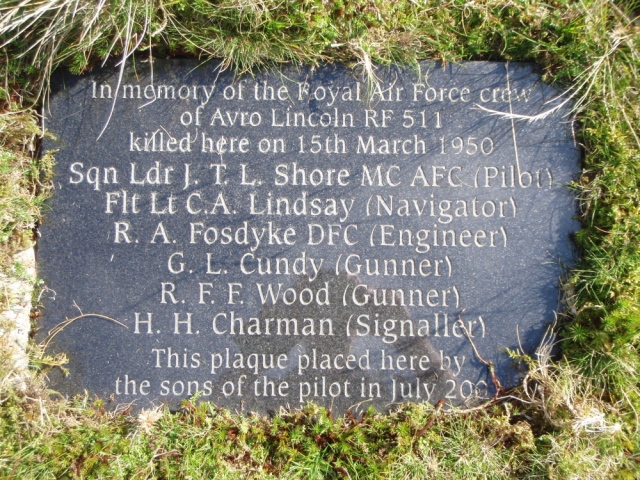 Memorial plaque to the crew members killed in the crash 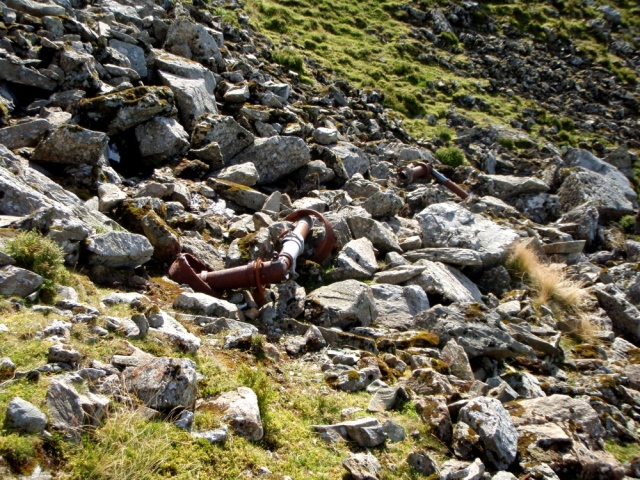 Part of the aircraft undercarriage 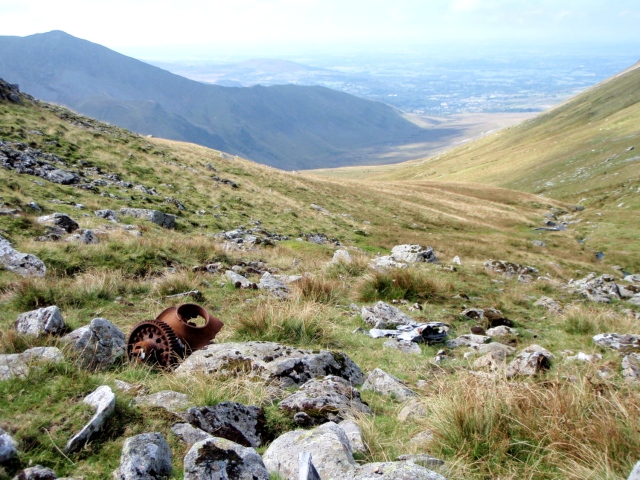 Rusty propeller hub and the view down the valley towards Bethesda 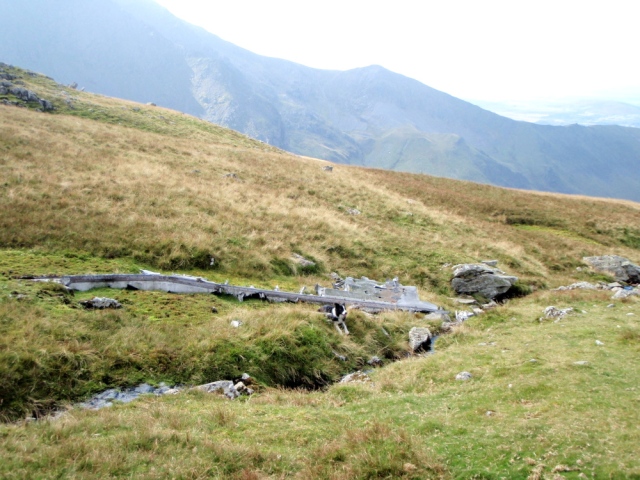 Aluminium spar from the aircraft

Avro Lincoln RF 501 was a peacetime aircrash, unusual in an area where most of the aircraft crashes occurred in WW2. The previous week I had found few signs of the accident at the impact site, high above the cwm, but lower down there were still large items of identifiable wreckage. The memorial plaque tells its own sad story, with two of the aircrew having been decorated for bravery in the war – the pilot, Squadron Leader John Shore, had been captured after being shot down on a bombing raid, and had subsequently escaped and made his way back to England. 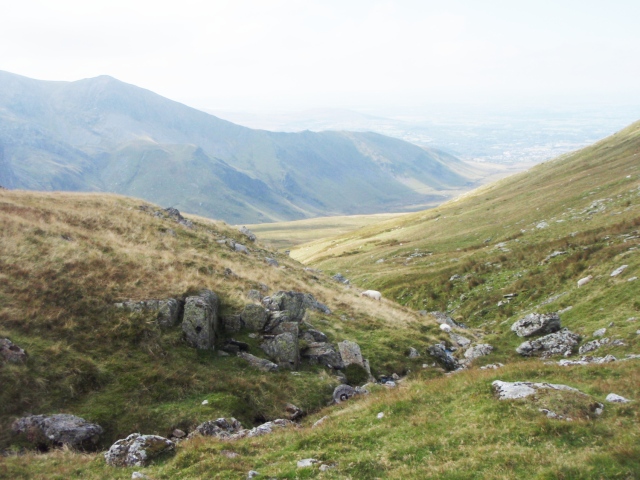 My route out down Nant Fach (‘Small Stream’)

The cliffs of Ysgolion Duon (The ‘Black Ladders’) on Carnedd Dafydd

My route back to the car took me below the impressive cliffs of Ysgolion Duon (the ‘Black Ladders’). The afternoon sun made the crags look quite inviting, but there is nothing for the summer rock climber here as the cliff is best known for its collection of fierce winter climbs. Having had two good Carneddau days in as many weeks, a plan began to hatch as I walked out. I had a route in-waiting crossing the Carneddau plateau, that I had been putting off for some time – another week of fine weather would remove the excuses …. 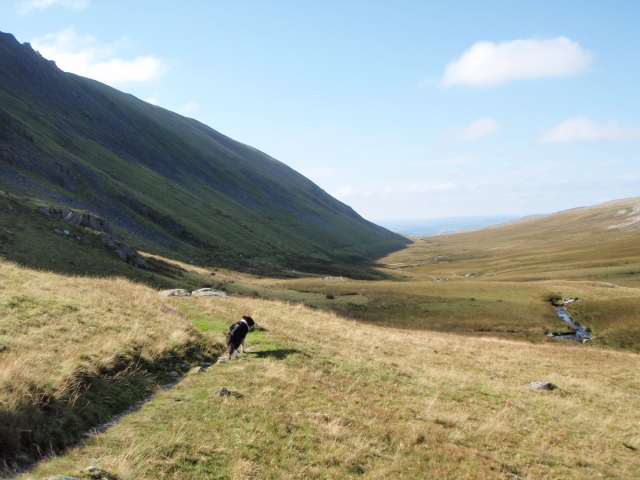 I've been mucking about in the mountains for longer than I care to mention. I started out by walking my local hills, then went on to rock climbing, mountaineering and skiing. Still doing it, and still getting a buzz. I'm now sharing the fun, through my guided walking business (Hillcraft Guided Walking) and by writing routes for other publishers, mainly Walking World and Discovery Walking Guides. Just to make sure I keep really busy, I am also currently a member of my local mountain rescue team.
View all posts by Paul Shorrock →
This entry was posted in 5. North Wales, Aircrash Sites and tagged Carneddau, hillwalking, mountains, photography, Snowdonia, Yr Elen. Bookmark the permalink.