Royal Marines ski patrol at Okstinden, not far from the Swedish Border – 1977

I hadn’t been to Norway since 1978. In the 1970’s I was a member of 45 Commando Royal Marines, which was at that time the only British military unit to train primarily for ‘Mountain and Arctic Warfare’.   I loved it, and did three winters out there, but hadn’t been back since – a return trip was long overdue, but the grandiose plan to do a ‘top to bottom’ trip of Norway was abandoned when we measured the mileage!    So, this trip was going to concentrate on the south.

Looking up the ski pistes …. 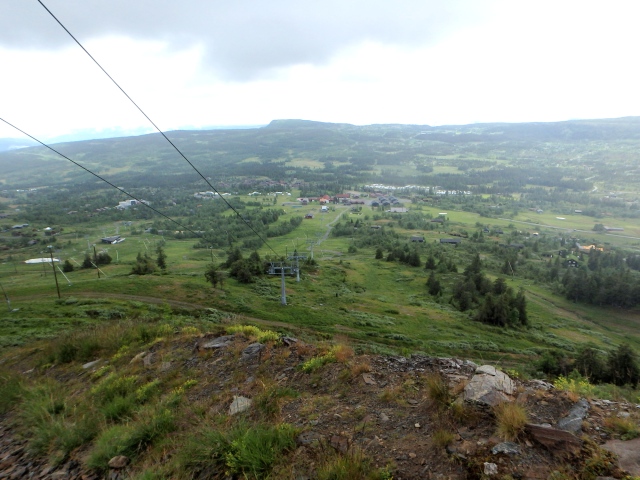 An excursion into Sweden to visit Chris’s daughter lined us up nicely for Lillehammer, which was the setting for the 1994 Winter Olympics.   As with many ski areas in the Alps, the pistes often become mountain walks in the summer months.  Skeikampen with an altitude of 1123 metres (3684 ft) had a good write up for a walk, which is why we were there on a misty, moisty morning in July.

Chris near the summit

The author and Border Collie ‘Mist’ at the summit 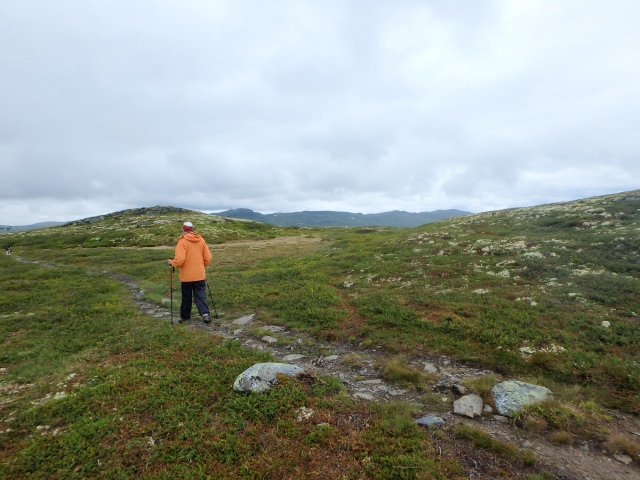 On the return leg below the cliffs of Skeikampen

Looking up towards the summit

The mountains in this part of Norway are very much like the Scottish Highlands, and none the worse for that.    We took the ‘full frontal’ approach to Skeikampen, getting the height gain over and done with.    From the top it was a gradual descent on a plateau, finishing up under the fierce looking cliffs that guard the east side of the mountain.   With the mist coming and going, it was very Scottish in flavour, but this was only the starter – the main course was a couple of days away.

Weather front starting to move in

Gjende Lake from Gjendesheim – Besseggen Ridge on the right

One of the main mountain areas in South Norway is the Jotunheimen, with Norway’s highest mountain Galdhøpiggen at 2469 metres (8,100 ft), but far more attractive to me was the classic Besseggen Ridge.   We drove the mountain road from Lom to the start point at Gendesheim in warm, sunny conditions, but by the afternoon there was clear evidence of a weather front moving in

The plan was to go for an early start, taking a boat to the start point at Memurubu.   The rain beating down on the roof of the campervan overnight told a different tale with the possibility of a lie-in and a later boat trip, but the view from the van when we lowered the blinds left little doubt that the trip wasn’t a ‘goer’ – Snow!    In July?!!

The view the next day!

Oh well, it looked as though the Besseggen trip was off the menu for this year, but it’s been there for several thousand years, so I might be able to fit in a return trip.   Without the snow next time!

The Besseggen Ridge on a better day

Looking back down the Besseggen Ridge

I've been mucking about in the mountains for longer than I care to mention. I started out by walking my local hills, then went on to rock climbing, mountaineering and skiing. Still doing it, and still getting a buzz. I'm now sharing the fun, through my guided walking business (Hillcraft Guided Walking) and by writing routes for other publishers, mainly Walking World and Discovery Walking Guides. Just to make sure I keep really busy, I am also currently a member of my local mountain rescue team.
View all posts by Paul Shorrock →
This entry was posted in 7. Everywhere Else! and tagged Border Collie, mountains, Norway, photography. Bookmark the permalink.