As time in the mountains has been a bit restricted again, here’s another post from the archives – this is from April 2013.  Bring on the snow!

Llyn Bochlwyd frozen, with Glyder Fach behind and to the left (JB)

It’s been a funny sort of winter in North Wales – a promising start to the winter mountaineering season in December gave a great trip out up Pen yr Ole Wen (see post #108) but after that the snow started a gradual retreat until only the higher peaks of Snowdonia had any cover (see post #120).  Then, a couple of weeks ago, winter returned with a vengeance, causing misery to farmers and commuters. 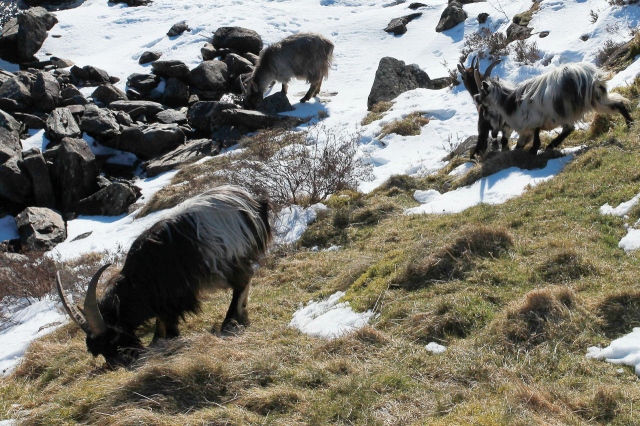 Wild goats at Ogwen down near the road, looking for grazing after the March blizzards (JB)

There’s a traditional saying in Britain about ‘ill winds’ – the ‘ill winds’ that blew from the east on the first day of spring certainly brought nobody any good.  Transport was disrupted, sheep were lost in snow drifts just as lambing was starting, and the wild goats in the Ogwen Valley came down to the road to graze.  Even hardy mountaineers could find little pleasure with 40mph winds on the summits.  Then, someone switched off the wind, and people came out to play.

The author ‘encouraging’ the team (JB) 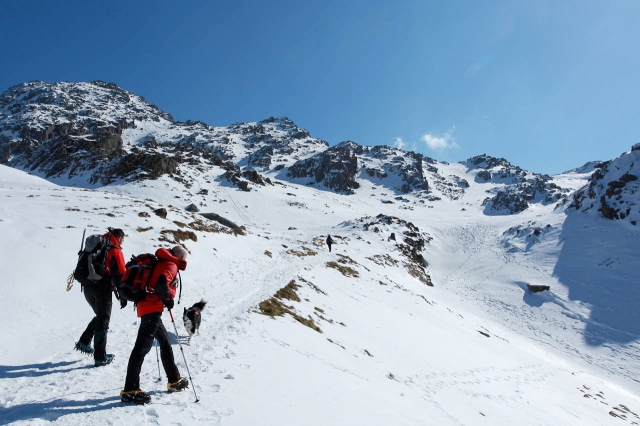 Tom, the author and ‘Mist’ striding out from Llyn Bochlwyd towards Bwlch Tryfan (JB) 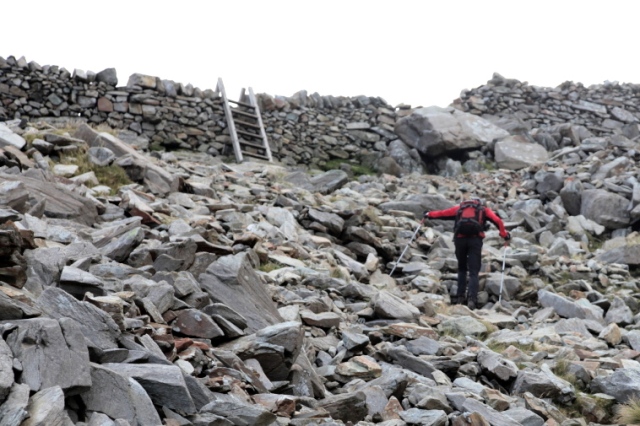 What the wall and stile look like without the snow (JB)

A sunny day was the extra ingredient to the mix – my photographer mate John Bamber took no persuading to drive down to Wales for a snowy mountain day, and he brought his nephew Tom to join in the fun.  We decided that a traverse of Glyder Fach and Glyder Fawr would fit the bill, and hit the trail to the frozen Llyn Bochlwyd, before heading up to the Bwlch (Col) between Tryfan and Glyder Fach – on our arrival it appeared that someone had stolen the stone wall!

Tryfan in the background (JB)

On the Miners’ Track, ploughing through soft, unconsolidated snow (JB)

We carried on along the Miners’ Track, or a close approximation!  At one point we contoured across the slope rather than losing height, but soft, unconsolidated snow made this hard going – after a swift ‘risk-assessment’ on avalanche conditions, we pressed on to better ground on the plateau below Glyder Fach. 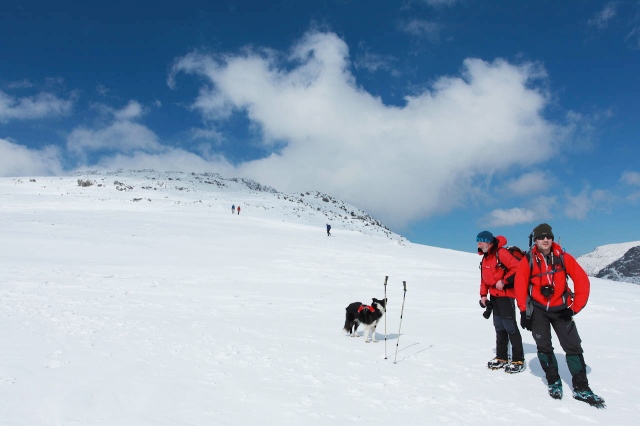 ‘Mist’, the author and Tom on the plateau below Glyder Fach (JB) 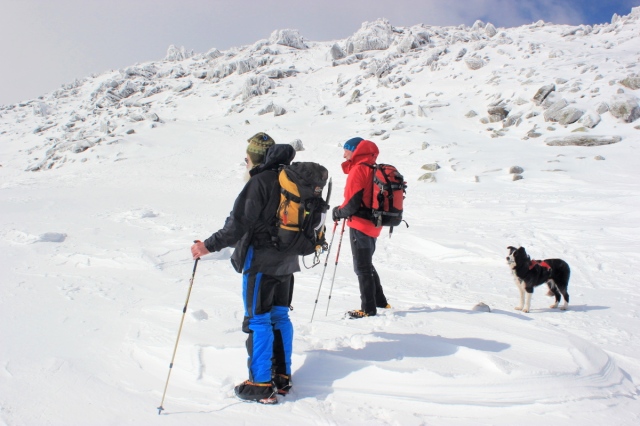 Sartorial elegance! – John goes for black and blue whilst the author sticks with his ‘traditional’ red (TS) 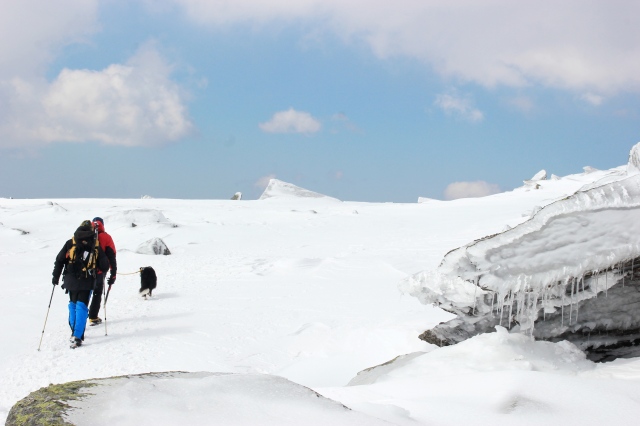 Heading up to the summit of Glyder Fach (TS)

Rime ice forming on the rocks just below the summit (JB)

From the plateau it was more uphill work.  We found a sheltered hollow for a refuelling opportunity (AKA sandwich break) before pressing on to the summit of Glyder Fach (it translates as “Little Heap of Stones”) passing ice-rimed rocks on the way.  Tom had declared himself a ‘crampon virgin’ at the start, but his fitness and natural confidence meant that you would never have guessed – ‘zero to hero’ by the time we reached the top. 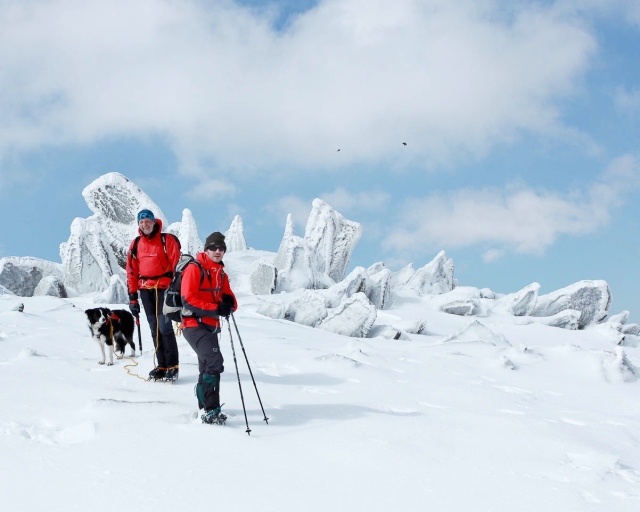 Near the top of Glyder Fach (JB)

The Cantilever Stone, possibly one of the most photographed features in the mountains of Snowdonia (JB)

As Tom hadn’t been this way before, a photo on the famous ‘Cantilever Stone’ was just about obligatory!  From there we by-passed the spiky top of Castell y Gwynt (Castle of the Winds) and carried on to the rim of Cwn Cneifion.

The rim of Cwm Cneifion, with big snow cornices (JB)

Photographer John caught in the act, taking the above image (TS)

Party about to climb the headwall of Cwm Cneifion (JB)

The rim of the cwm was edged by large, impressive snow cornices – we kept a respectful distance from the edge, and ‘Mist’ had a rope attached to her hill-harness.  As we passed along the top we watched a party of three climb the easy line to the top of the cwm. 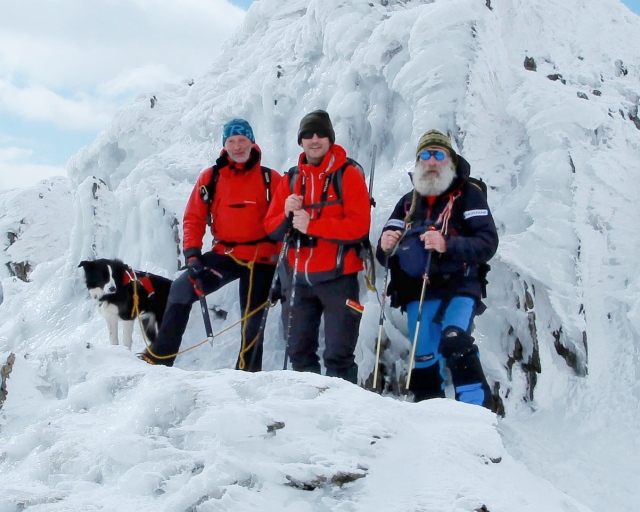 At the summit of Glyder Fawr – ‘Mist’, the author, Tom and John (JB)

The descent from the summit (JB)

We were soon at the high point of the day, the summit of Glyder Fawr (the “Big Heap of Stones”).  Here we had the most nerve wracking part of the day, as John rested several hundred pounds worth of Canon camera on an icy ledge – the fact that we have a summit photo shows that the camera survived! 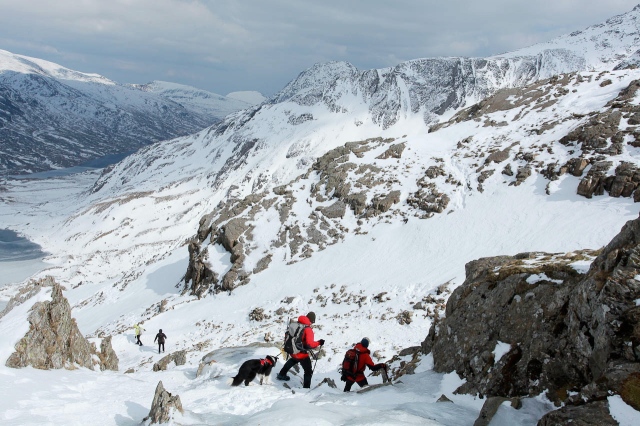 Heading towards the Devil’s Kitchen (JB) 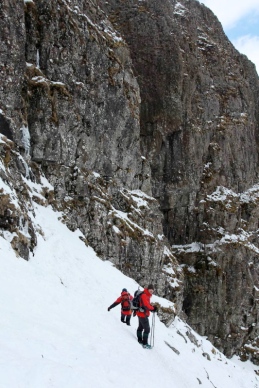 The descent from the Devils Kitchen, otherwise known as Twll Du (Black Hole) would have been uneventful had we not come across the large party slithering their way down the icy path – two of them were clearly well-frightened, and we decided that it was probably better to help them down an icy rock step, rather than having to rush down for Ogwen Valley Mountain Rescue team to pick up the bits.  For those interested in this sort of thing, we roped the two of them down on an Italian Hitch from a buried ice-axe belay, on the worst snow of the day – I knew the axe would stay put as I lowered, because John was standing on it!  For the guys we helped, it was probably a great adventure – we were just glad it hadn’t turned to misadventure.

Another happy customer says “Thank you” with a big, sloppy kiss! (JB)

I've been mucking about in the mountains for longer than I care to mention. I started out by walking my local hills, then went on to rock climbing, mountaineering and skiing. Still doing it, and still getting a buzz. I'm now sharing the fun, through my guided walking business (Hillcraft Guided Walking) and by writing routes for other publishers, mainly Walking World and Discovery Walking Guides. Just to make sure I keep really busy, I am also currently a member of my local mountain rescue team.
View all posts by Paul Shorrock →
This entry was posted in 5. North Wales and tagged Border Collie, Cwm Idwal, Glyderau, hillwalking, mountaineering, mountains, photography, Snowdonia, winter. Bookmark the permalink.