The panorama coming down from Cadair Bronwen at the end of our Berwyn day (see post #204) had views of some old familiar hills from entirely new directions.  The outline of the Rhinog Mountains was particularly easy to identify, but as I added the image to the blog post I noticed another couple of hills in the hazy light – I had an idea what was lurking there, but projected the view on the map to check.    No doubt about it – Rhobell Fawr and Dduallt, two mountains I had never visited.  Well, that was the next trip planned then! 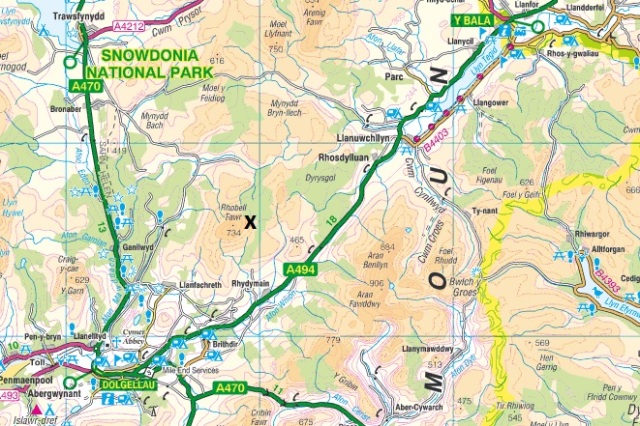 X marks the spot! Rhobell Fawr, between Dolgellau and Bala)

The route – Rhobell Fawr and Dduallt

There must be loads of people who walk the mountains of the UK who have ever heard of Rhobell Fawr, and many of those who know the name have never been there.  That included me – I had heard of Rhobell Fawr (Big Saddle) but would have struggled to find it on the map, but I didn’t have a clue where Dduallt (Black Hillside) was.  All I did know was that these isolated outliers of the Arenigs were somewhere close to the Dolgellau-Bala road.  Time to find out more.

Starting out with Rhobell Fawr on the skyline, left of centre 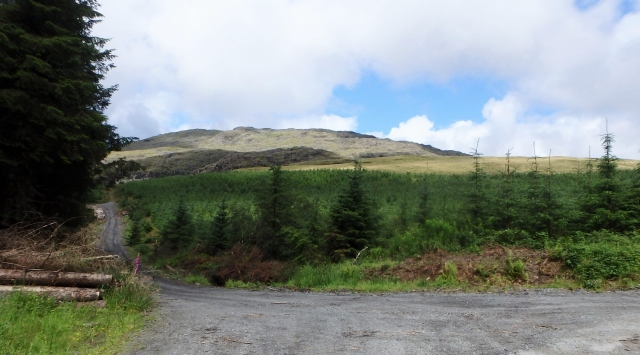 View towards Rhobell Fawr from the forestry track

The map indicated two small, sprawling hills, with Dduallt being the better defined of the two with an obvious ridgeline.  Also evident was a load of forestry, some of which lay between the two summits – bushwhacking through dense pine forest is rarely fun!   The map indicated several forest rides and fire-breaks, but even the excellent UK OS Mapping can often be wrong in woods.

Almost time for a bit of uphill ….

…. in fact, some fairly steep uphill!

Rock steps on the way up 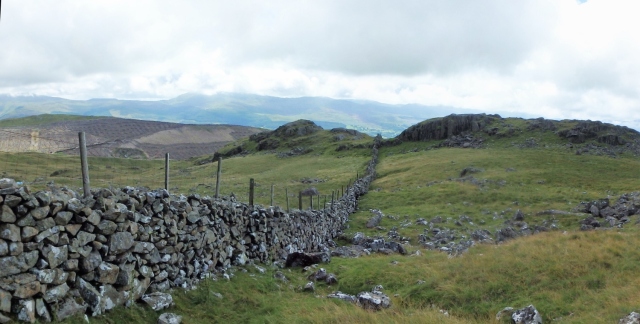 The view looking back …. 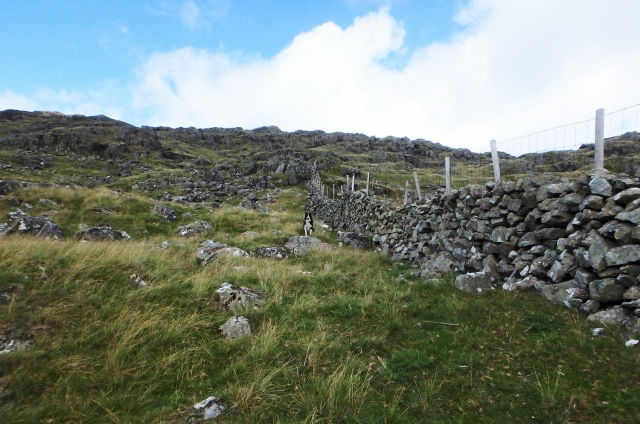 The soggy plateau below the summit ….

…. with the Trig Point coming into view

The logical route followed the line of a stone wall heading steeply up hill.  The builders had routed their wall through a series of craggy steps, which provided a bit of amusement in threading a way through them.    Eventually the angle relented, leading to a soggy, boggy plateau below the summit. 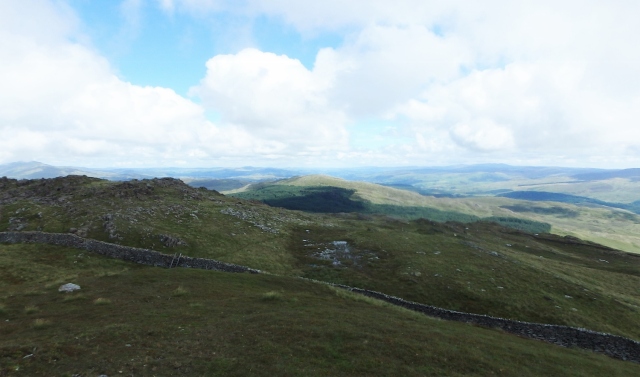 View of Dduallt from Rhobell Fawr

The summit was every bit as sprawling as the map view had indicated, but the old survey Trig Point was an unmistakable feature.    I took time out for a sandwich and a coffee, assisted by Border Collie ‘Mist’ who can locate a sandwich from 100 metres.  The day was hot, and I kept a careful eye on ‘Mist’ in case she became too warm – Border Collies will keep going until they drop, but they are also clever enough to seek out water and shade at every opportunity.

The steepest part of the descent ….

…. and the craggy east side of Rhobell Fawr

Back on the forestry track ….

…. but not for long – time to take to the trees

The descent line by another wall was one of the steepest I had followed in a long while, and at one point I deviated away from the wall for an easier gradient.   Dog and I were soon back on the forestry track which led to one of the wide breaks shown on the map – fortunately no ‘lumber jacking’ was involved, though collapsed trees were occasionally an obstacle 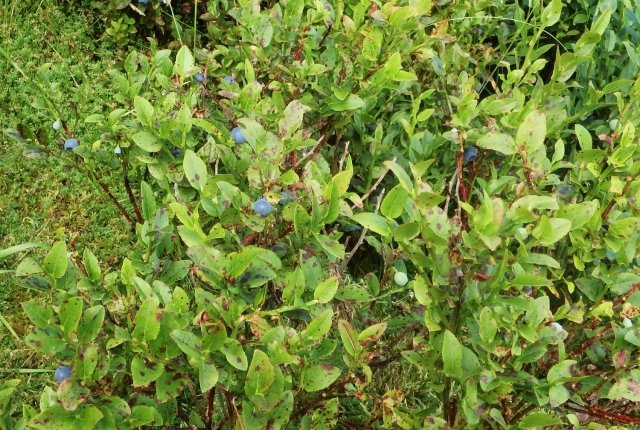 Blueberries, and lots of them!

Looking back towards Rhobell Fawr from the Dduallt Ridge

Two fellow travellers on the summit of Dduallt

Emerging from the forest, the next objective was obvious.  I won’t dwell too much on the ascent of Dduallt, other to say it was rough, tussocky and boggy.    Added to that was the heat of the day and my earlier ascent of Rhobell, which was probably too fast for the hot conditions.   The one crumb of comfort was a good crop of blueberries on the way, but it was with some relief that I arrived at the summit, to find it already occupied by the only people I had seen all day – I left them to it.

Looking north from Dduallt towards Arenig Fawr (on the right)

Heading down towards the forest

On the descent, the views towards Arenig Fawr were superb and from an angle that was new to me.    It was then a slog of a descent down more bog and tussocks followed by a bit of bushwackery through the wood to get to the forest trail – easier walking and a bit of shade brought a return of energy, and as usual ‘Mist’ was keen to be moving on.  No wonder – it was already past Collie feeding time!

On the forestry track, heading for home

I've been mucking about in the mountains for longer than I care to mention. I started out by walking my local hills, then went on to rock climbing, mountaineering and skiing. Still doing it, and still getting a buzz. I'm now sharing the fun, through my guided walking business (Hillcraft Guided Walking) and by writing routes for other publishers, mainly Walking World and Discovery Walking Guides. Just to make sure I keep really busy, I am also currently a member of my local mountain rescue team.
View all posts by Paul Shorrock →
This entry was posted in 5. North Wales and tagged Arenigs, Border Collie, hiking, hillwalking, mountains, photography, Snowdonia. Bookmark the permalink.