(Some images will zoom – Left click to zoom in, use browser return arrow to go back)

So far, our May trip to Scotland hadn’t got any further than Glencoe (see post #222) and Skye (posts #223, #224 and #225) which was fine by me as the settled weather and lack of midges meant that time could be spent visiting new places as well as old favourites.    The Fairy Pools of Allt Coir’ a’ Mhadaidh were certainly a new one on me, but every reference to Skye on the Internet gave the area a mention, so it looked like a plan. 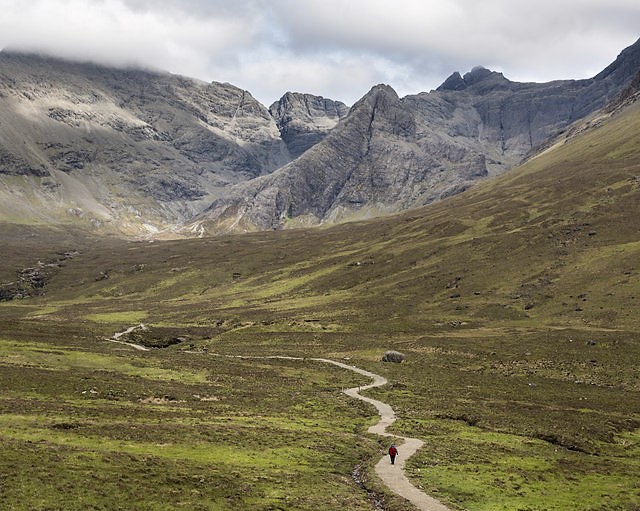 The constructed path at the start of the route (Nigel Corby)

I’ve camped at Glen Brittle on Skye many times over many years, and one of the iconic sights of the Cuillin Ridge coming over the narrow road from Carbost is the peak of Sgurr an Fheadain with the striking cleft of ‘Waterpipe Gully’, so obvious that you can’t miss seeing it.    This time there was something new – a constructed path where previously there had only been moorland.    It looked like we had found the Fairy Pools. 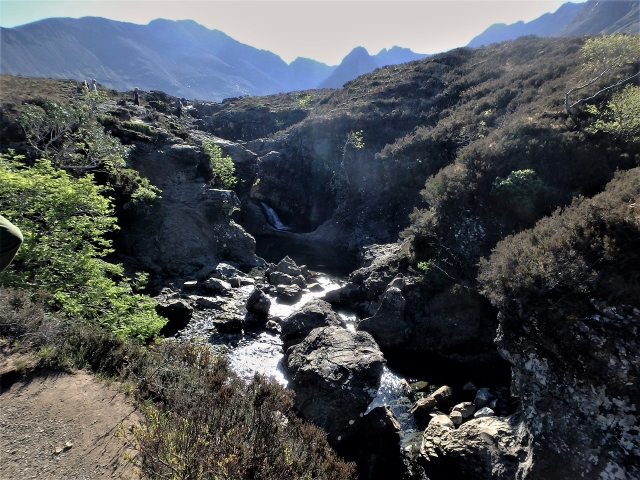 The early part of the walk – light conditions not optimum!

Chris and I had managed a couple of decent walks out from Glen Brittle (see post #225) and were now heading for Torridon, but Border Collie ‘Mist’ was ready for her daily walk and the Fairy Pools ticked a few boxes.    Unfortunately, light conditions for photography were not the best – it was sunny enough, in fact it was too sunny, with the light shining right in the camera lens for most of the way up the path.

The famous pool with the underwater arch – © isleofskye.com

My current weapon of choice for mountain photography is the Olympus ‘Tough’ TG-850 camera – it’s reasonably priced, but is also able to take a 2.1 metre (7 ft) fall and is waterproof to a depth of 10 metres (33ft).    That means it will survive anything that I’m likely to do to it!   It also has a very wide-angle lens (21 mm) which is great for landscapes.  However, I’ve never really mastered how to get the best out of it in ‘less than perfect’ light conditions – perhaps the answer is to carry a bottle of blue dye when photographing the famous pool with an underwater arch!

Further upstream with the Cuillin Ridge beyond (Rob Farrow)

Meanwhile, the views are just as good (even if the light conditions could be better)

A busy day – almost certain to be more packed in summer

I didn’t have the ‘blue dye’ with me on this occasion, so some of the images lack the ‘buzz’ that the professionals achieve – perhaps I need to learn how to use Photoshop!    Whether or not photography is the aim, the walk up by the river (Allt Coir’ a’ Mhadaidh) has become very popular over recent years, and you will rarely find solitude there unless it’s pouring down, or the midges are biting as they do over the summer months. 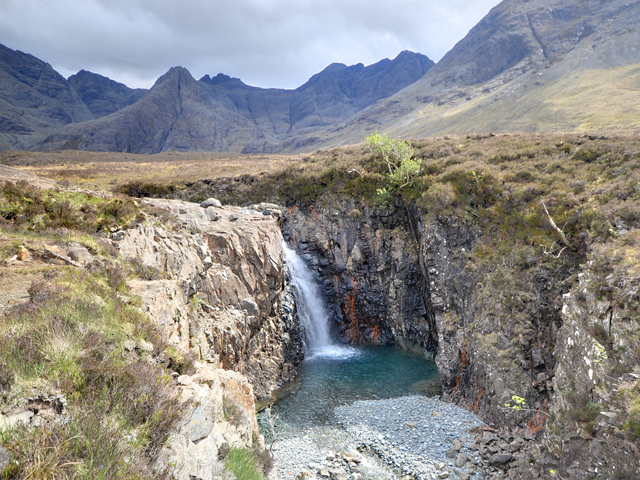 Great image of one of the falls (John Allan) 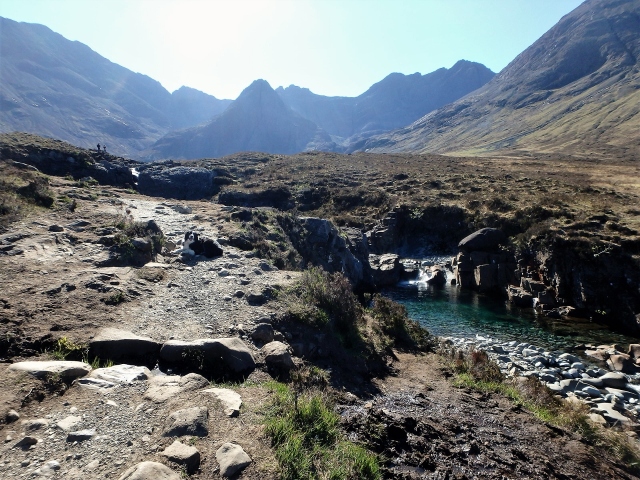 Further up the Allt Coir’ a’ Mhadaidh river ….

…. and nearing the head of Coire na Creiche 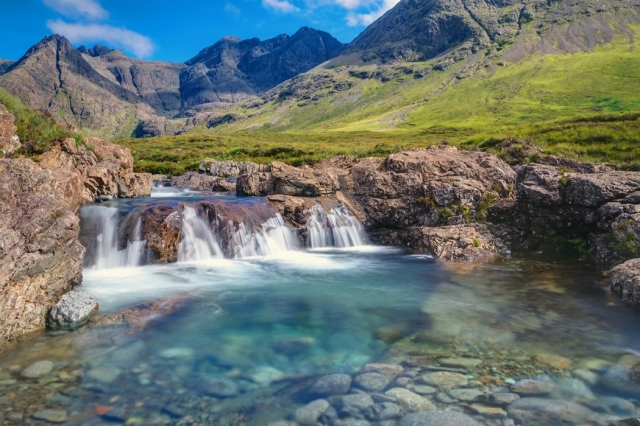 Lovely shot, demonstrating why this walk has become so popular © VisitScotland.com

It’s said that most tourists don’t walk much further than 100 metres from their cars, but the pools and waterfalls had enticed quite a few visitors to follow the path just that bit further – the sunny day also contributed and it was a pleasant change to take just a light pack instead of a hill rucksack.    What’s more, Chris carried it which was even better! 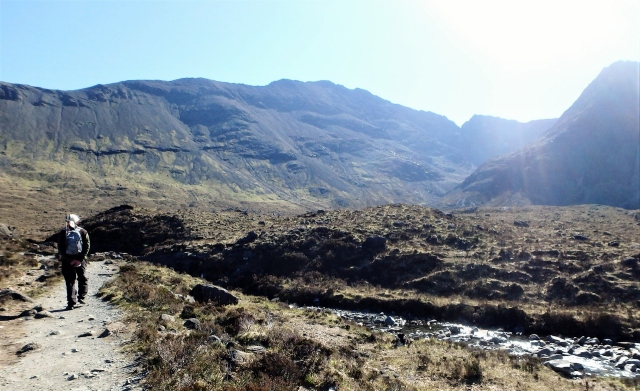 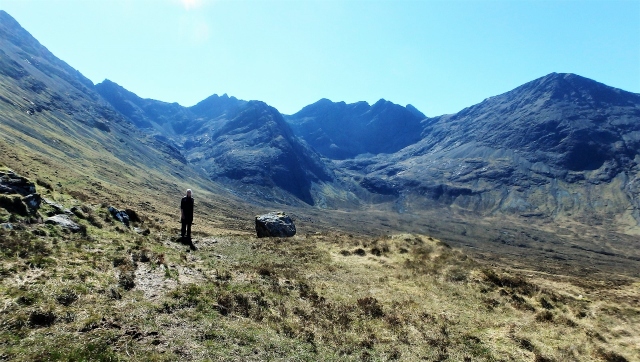 It the falls and pools were impressive, I found the feature dominating the scene was the Cuillin Ridge, which was getting closer with each step.    As we reached the turning point away from the river we came right up to the lower slopes of Sgurr an Fheadain, and soon had a good view into the twin corries of Coire a Mhadaidh and the smaller Coir’ a’ Tairneilear, and I remembered that I had been here once before, in 1976.

Route taken in 1976 (red) round the coast, up Coir Uisg and over the Ridge

The Cuillin Hills, showing both routes

I wrote about mountain training in the Royal Marines Commandos in an earlier blog (#224) and the reader might have imagined it to be one big ‘jolly’!    We did, in fact, have to do a bit of work on the trip to pay back ‘the Pusser’ (Royal Navy slang for anything to do with, or owned by, the Navy) and one day’s training was a tactical patrol (with weapons, etc) round the coast from Glen Brittle to Coir Uisg (Coruisk).

Coir Uisg is one of the most beautiful parts of Skye, if not the planet (well, in my humble opinion anyway).    What’s more, it was good enough to fight for, which is exactly what we did.   Our enemy were ML’s (Mountain Leaders) of the Royal Marines ‘Mountain and Arctic Cadre’, who were our instructors during Skye training – as well as being skilled mountaineers and skiers, they are also one tough and fit bunch of soldiers! 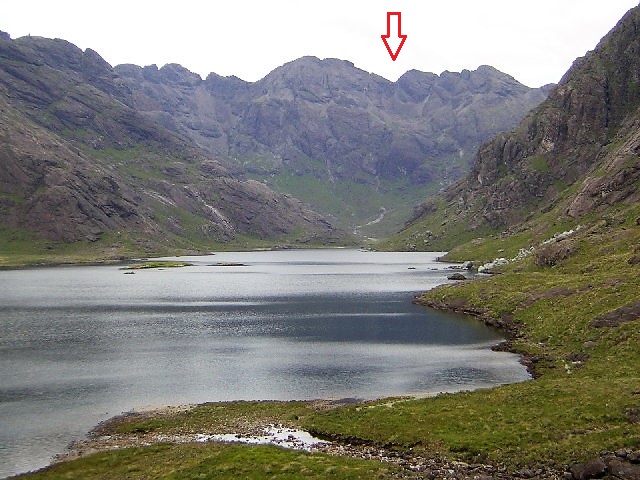 Our task was an ‘Advance to Contact’ heading up alongside Loch Coruisk, with the ‘enemy’ firing the occasional shot at us (blanks thankfully!).    Our task was to continue to advance up the corrie, clearing ‘enemy’ positions along the way – visualise Afghanistan in more recent times, but a bit cooler, and that’s the kind of thing we were doing.    Eventually the mission was complete and all we had to do was get back to our camp at Glen Brittle – the solution was a crossing of the Cuillin Ridge at Bealach na Glaic Moire. 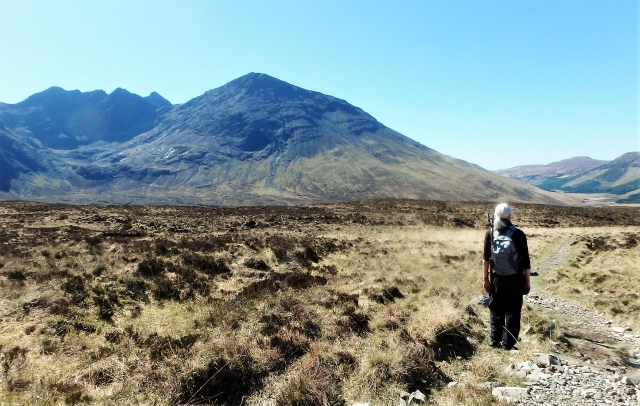 Coire na Creiche with Coire a Mhadaidh on the left

Having crossed the ridge, we descended by Coire a Mhadaidh into Coire na Creiche, and walked down the Fairy Pools path without really noticing the water, though to be fair it had been a long trip covering 24 kms with 1400 metres of height gain.     It had been a long, strenuous day, but the mountain scenery made up for it!

We weren’t the first to come down Coire na Creiche bearing arms – in 1601 the corrie was the scene of the last Clan battle on Skye.    The MacDonalds and the MacLeods had been feuding for over a year, with several bloody skirmishes having taken place, but things came to a head and the MacDonalds won the day, defeating the MacLeods and capturing the Clan Chief. 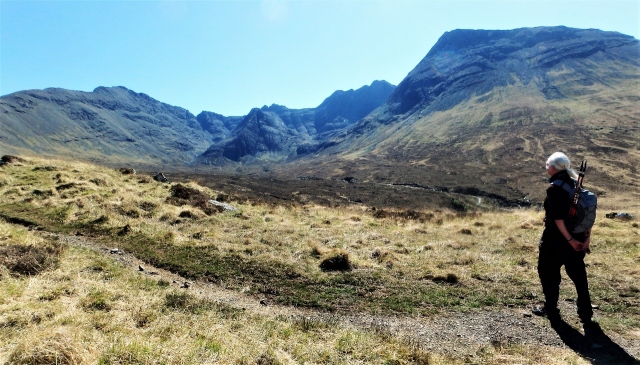 The only battle fought nowadays is the battle to find car parking space for the walk – the Fairy Pools trip is well worth the journey, but you need to arrive early on a fine day to beat the traffic problems.    As an alternative, I can recommend a stroll round the coast from Glen Brittle to Loch Coruisk followed by a crossing of the Cuillin Ridge at Bealach na Glaic Moire – carrying a rifle is optional! 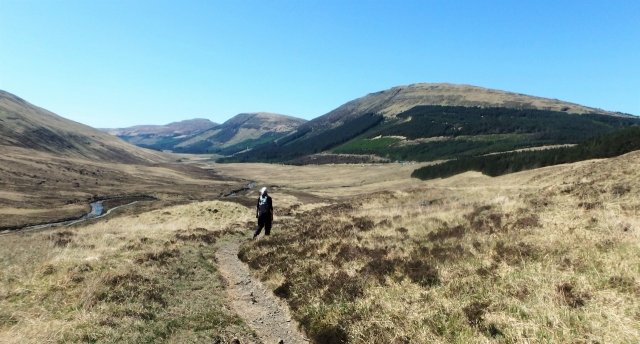 …. then it’s time to head for home

Text and images © Paul Shorrock except where indicated otherwise.

Images tagged John Allan, Nigel Corby, Rob Farrow and Gareth Foster are taken from the Geograph Project and are reproduced under a Creative Commons Licence

p.s.   For more information about this area and the rest of Skye visit  isleofskye.com  There is also useful information on Skye and the whole of Scotland at VisitScotland.com

I've been mucking about in the mountains for longer than I care to mention. I started out by walking my local hills, then went on to rock climbing, mountaineering and skiing. Still doing it, and still getting a buzz. I'm now sharing the fun, through my guided walking business (Hillcraft Guided Walking) and by writing routes for other publishers, mainly Walking World and Discovery Walking Guides. Just to make sure I keep really busy, I am also currently a member of my local mountain rescue team.
View all posts by Paul Shorrock →
This entry was posted in 1. Scotland and tagged Border Collie, Commandos, hiking, hillwalking, mountaineering, mountains, photography, Royal Marines, Scottish Highlands. Bookmark the permalink.

1 Response to #226 – Coire na Creiche and the Fairy Pools