(Left click images and maps to zoom in, use browser return arrow to go back)

I guess we are all creatures of habit.   I’m prepared to bet that for most of us, our hill days are circular routes starting and finishing at the same place, and logistically this makes sense.   The alternative is to walk an ‘out and back’ route as on my Sgurr na Stri trip (see post #247) for the same reason of convenience.   Occasionally though, it’s more satisfying to walk an ‘A to B’ route, which is how this trip was conceived. 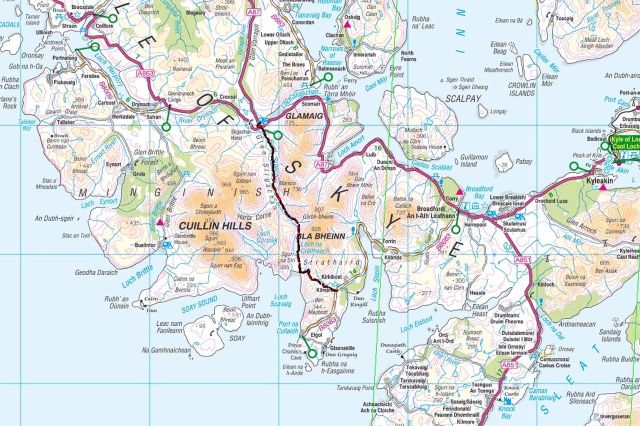 Regular readers will know that ‘me missus’ likes a good walk out, but not necessarily over something big, steep and pointy.    I like my ‘pointy’ mountain days, but a walk through the valleys and glens can give a different perspective on familiar hills and mountains, which is one of the reasons we decided to walk from Kirkibost near Elgol to Sligachan – the other reason was the idea of being on a journey.

There are scores of routes like this in the Scottish Highlands.   These are ancient trails, used for centuries to take the most straightforward way from one place to another.   The distance from Kirkibost to Sligachan is a respectable 18kms through wild country, where a twisted ankle could result in an epic, but a height gain of just over 400 metres meant that if pulses were racing it would be due to the scenery and not exertion. 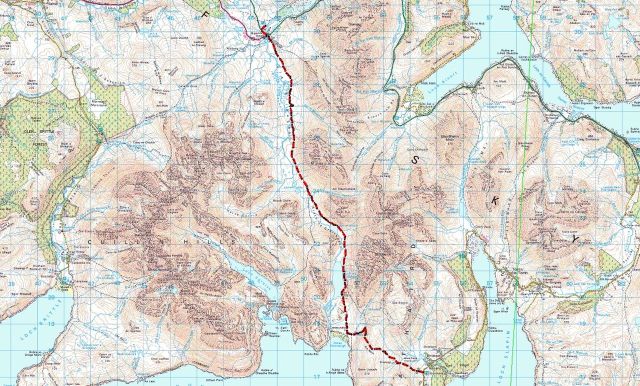 The problem with ‘A to B’ walks is always going to be finding a way of linking up the two points.   The easiest way is to use two cars, one to each end of the route, but this isn’t always possible.   Over the years I’ve used buses, trains, boats, hitch-hiked and even on occasion walked the link, making the days route twice as long.   This time we were going by bus and taxi.

We had based ourselves at Sligachan, so needed to get to Kirkibost, a distance of almost thirty miles by road.   A taxi all the way was ruled out as being too expensive, but a bus link to Broadford brought the cost down.   Our taxi driver was a chatty Lancastrian who had settled on Skye, and who spent his days driving or fishing.   As he drove away from our drop-off point, we knew we were committed – if we wanted to eat that night we had to walk back to Sligachan!

Chris looking none too impressed with the weather ….

…. but things start to improve

Chris is up for long-ish walks, but not usually as ‘long-ish’ as 18kms!   I had thought that a bit of preparation beforehand might be wise, and we did a practice route of the same distance back home in North Wales before the Scottish trip (blog post to follow in a few weeks).   That being done, Chris was confident about the distance – all we needed now was for the mizzly rain to stop. 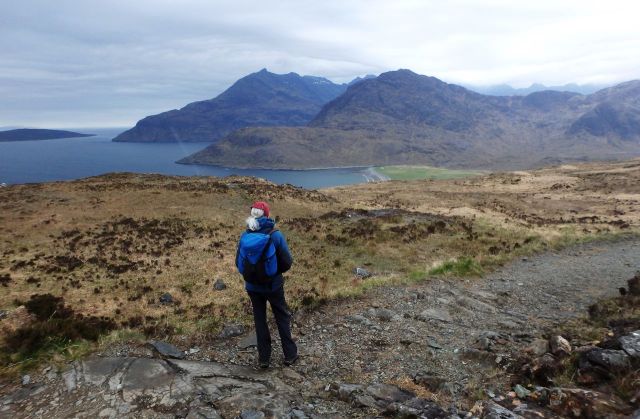 The first view down to Camasunary 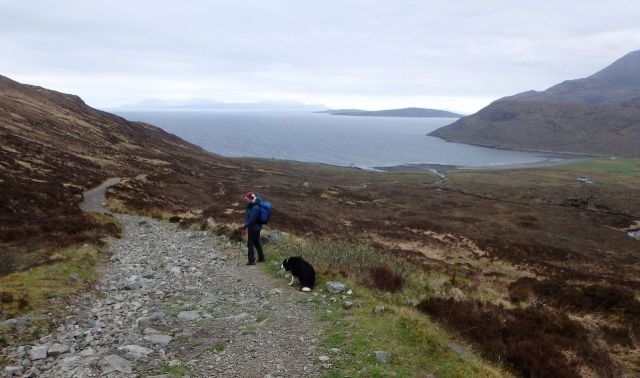 We had covered the first section of the route last year, with a walk to the bothy at Camasunary (see post #223), an ‘out and back’ trip of 5 kms each way.   It was soon obvious that we weren’t going to enjoy the sunny conditions of the previous trip, but the mizzle gradually died away and by the time we reached Camasunary it was cloudy but dry.

The house at Camasunary with Sgurr na Stri behind

The junction to Strath na Creitheach and (eventually) Sligachan 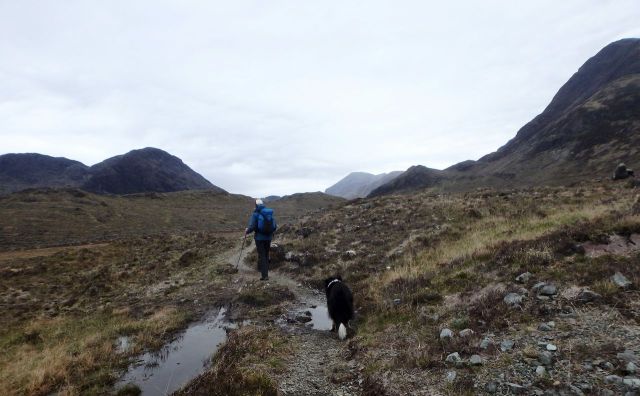 Heading up the Abhainn Camas Fhionnairigh ….

…. and looking back towards Camasunary

At Camasunary we took the old path heading to Strath na Creitheach and (eventually) Sligachan.   The path was a bit rough in places, but there was no navigational challenge in following it, and it didn’t seem long before we reached Loch na Creitheach. 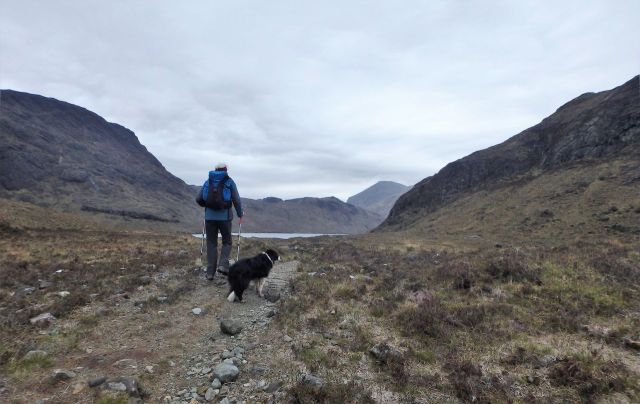 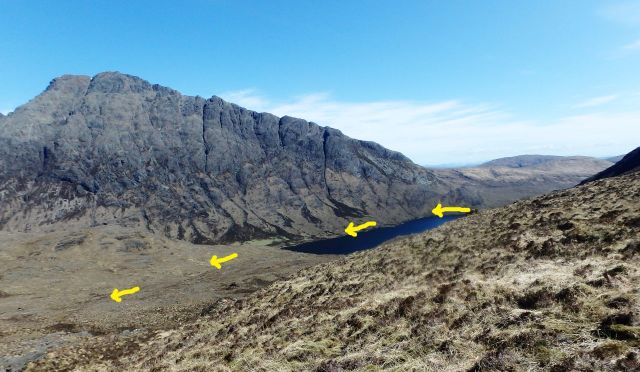 Looking ahead to Ruadh Stac and Marsco ….

…. and looking back towards Camasunary

At the loch, the trail is squeezed in between Sgurr Hain and the lake on one side and the impressive bulk of Blabheinn (Blaven) on the other.   I had seen the route the previous day from Sgurr Hain when I had done the 25km route to Sgurr na Stri and back (post #247) and the Sgurr na Stri trip had been a good ‘recce’ for this one.

Near the head of Loch na Creitheach 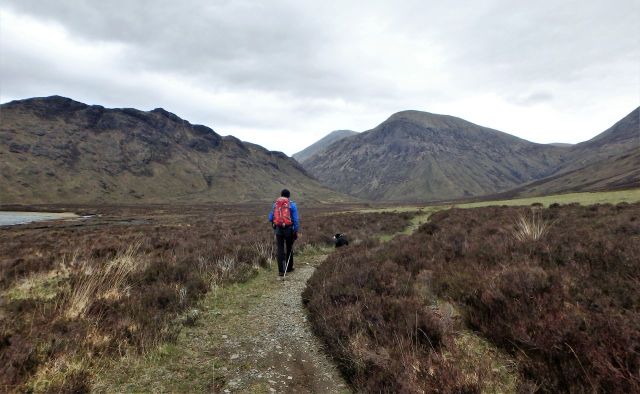 The author in Strath na Creitheach

Looking back towards Blabheinn (right) and Clach Glas (centre)

For me, the backdrop of Blabheinn and Clach Glas was the most dramatic part of the day, though later on, sections of the Cuillin Ridge were equally impressive.   For Border Collie ‘Mist’ it was the second long walk in the space of two days, and although she is now ten years old, she still romps along like a young dog – that is, until sandwich time, when everything comes to a stop.

…. and the small lake of Loch an Athain

Just after Loch an Athain, we finished gaining height as we passed the 90 metre contour – from here it was mostly downhill, though distance-wise we were only halfway.   After my ‘recce’ of the previous day, I knew where to look for the first sighting of the Sligachan Hotel, and having pointed it out to Chris, it was ‘steady away’ back to the campsite, with the usual dinner for the Collie and a can of cold cider for me.

About halfway – mostly downhill and heading for home

I've been mucking about in the mountains for longer than I care to mention. I started out by walking my local hills, then went on to rock climbing, mountaineering and skiing. Still doing it, and still getting a buzz. I'm now sharing the fun, through my guided walking business (Hillcraft Guided Walking) and by writing routes for other publishers, mainly Walking World and Discovery Walking Guides. Just to make sure I keep really busy, I am also currently a member of my local mountain rescue team.
View all posts by Paul Shorrock →
This entry was posted in 1. Scotland and tagged Border Collie, bothy, hiking, hillwalking, mountains, photography, Scottish Highlands. Bookmark the permalink.